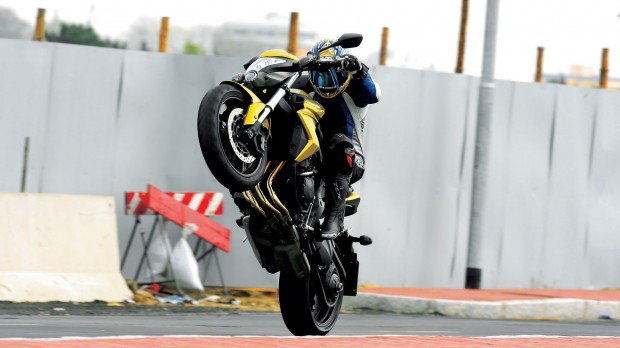 YOU MEET THE NICEST PEOPLE ON HONDA CB1000R… AND ALSO ME 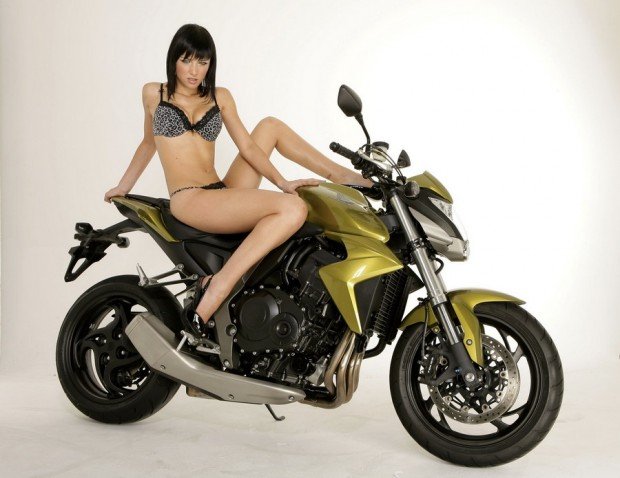 I flick the CB1000R onto its ear and tuck its nose on the inside of my compadre’s (Island Mick) nicely fettled K6 1000 through a fast bumpy uphill left. I can see Mick trying to feed the Jap nuclear reactor in the big Suzuki to its rear tyre, and he is having to part-throttle in the fast, very bumpy going just to stay competitive.

By contrast, the little Honda’s soft delivery and supple set-up let it take power earlier, and thus punch more of it out of its rear hoop. The compliant set-up (standard factory settings) is letting the Dysentery Green (someone signed off on that colour!) Honda track the garbage surface accurately and lay down drive. The rate of turn and very nicely chosen damping rates allow me to carry good speed, with that “Everything is going to be OK” vibe that Hondas always manage.

It’s the rate of turn and neutral chassis that is allows me to avoid the worst craters and to chop lines mid-corner with great precision and ease. It’s a well-sorted motorcycle. Which goes along way toward calming the occasional “I’m going to eat a very large gum tree” thing I had happening moments later.

This is probably not Nick, either. But you never know.

Honda have certainly knocked the top-end off the blade motor, and I’m in no way suggesting that given better conditions the CB is going to hang with 170bhp superbikes with right-minded and skilled pilots on board. But that would be missing the point. It’s enormous fun trying to do just that on this bike.

The 8000km-old example I have is as crisp as really crisp thing, and shows zero wear and tear other than some discoloration on the headers. A less lazy man could sort that with some Autosol. Damping is still fresh and subtle. A set of fresh Dunlop Sportsmarts don’t hurt the situation, and neither does the Akrapovic system fitted beneath the green. The fender eliminator makes the most of the minimalist tail piece. Yes, I know our wonderful Protectors of the Highways frown on these things. After all, short mudguards have been costing lives…yes, that must be it. The Nissin four-spot brakes are strong and very easy to use, and importantly the ‘Blade-sourced forks cope with the brakes considerable power even over the BMX tracks that pass for roads in Gippsland. 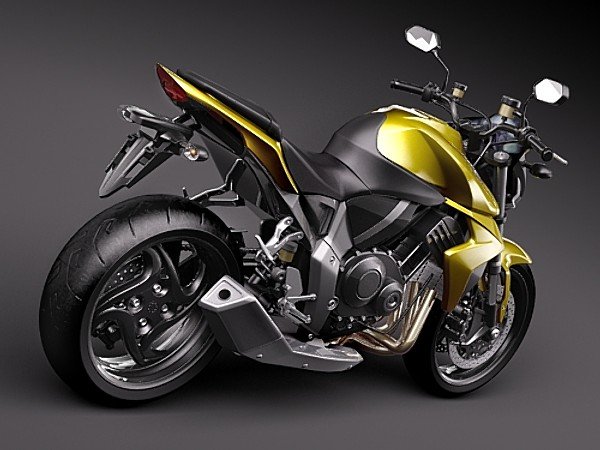 On release the CB1000R was praised for it’s chassis, quick steering and build quality, and lambasted by a great deal of the press for the soft engine. Having been lucky enough to spend a few thousand Ks on a Ducati 1098 Streetfighter S, and following a quick spin on Aprilia’s flat-barred RSV4 attack dog. I believe there is certainly a place on this earth for rabid, big-power naked bikes. Despite being some of the most exciting motorcycles available, the ludicrous pace they are capable of is at odds with their riding positions. It just comes down to plain old aerodynamics having their way with the steering at those custodial paces.

Or I should go join an embroidery circle. The latter may be advisable .

In no way is the Honda slow, with around 120bhp at the tyre and Honda’s clichéd linear power curve. It is merely not the psychopath that had been unrealistically expected by many. It’s a Honda. You can invite it round to dinner and it will bring the right wine and be polite. I get the feeling the aforementioned Italian animals can also come for dinner. But they may drink all your vodka and overturn the dining table before the night is through. 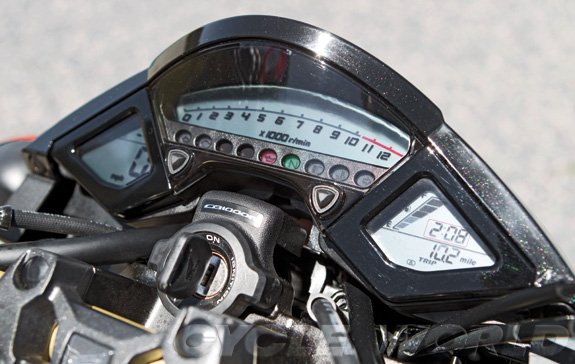 Comfort is excellent. I ploughed a 900km-plus day from Sofala in NSW to the hills east of Melbourne with a hangover you could saddle and ride. I barely twitched in the seat.

Tank range seems to hover around the 250km mark, and although I am not a man to ride deep into “fuel bar flashing” zone, I did manage 289kms before everything went… um, quiet. Strapping gear to a tailpiece the size of a pack of Stuyvesants is certainly challenging, but eminently possible; and I’m talking camping gear and everything that goes with that scenario.

The CB1000R was not a sales success for Honda MPE Australia. This was primarily due to the bike being priced around $18K on release. Eventually it was rebated back to around the $13K mark as a model run-out. There are very few on the secondhand market (so few, in fact, that Redbook only have a new price valuation) and a 2009-complied bike is the latest model you will find. Scarcity has kept secondhand the prices high. You would expect to pay $9-11000 for a used bike. This particular bike was advertised at $10790 on road.

And black is the only other colour option available in Australia. 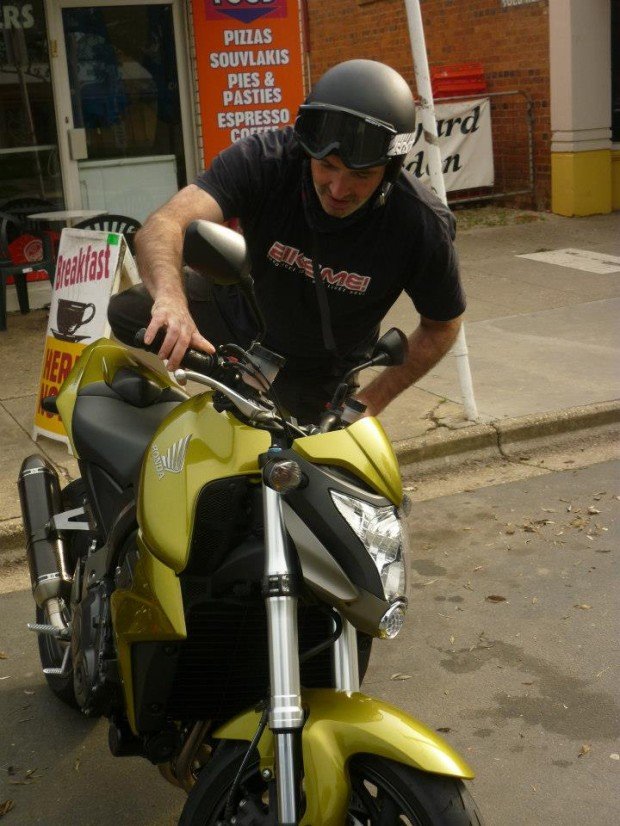 This is actually Nick. Beaut bloke.

The CB1000R compares well to its only direct competitor in the 08-09 year model, the Kawasaki Z1000. The single-sided swing arm, superb fit and finish give the Honda a premium feel the big Kwaka can’t match. In terms of dynamics, it is simply a better-balanced package. The Triumph Speed Triple of the same era compares much better in terms of premium feel in the mid-priced , big-bore naked market. However the Trumpy asks a lot more of its pilot in terms of input and effort and simply can’t match the Honda’s quick steering. To call the the CB a UJM (a tag that fitted the CB900 Hornet it replaced quite well) would be selling it very short. I can’t see ownership being anything other than the best part of the Honda cliché. Put fuel in it, put a key in it and go riding. Fast. 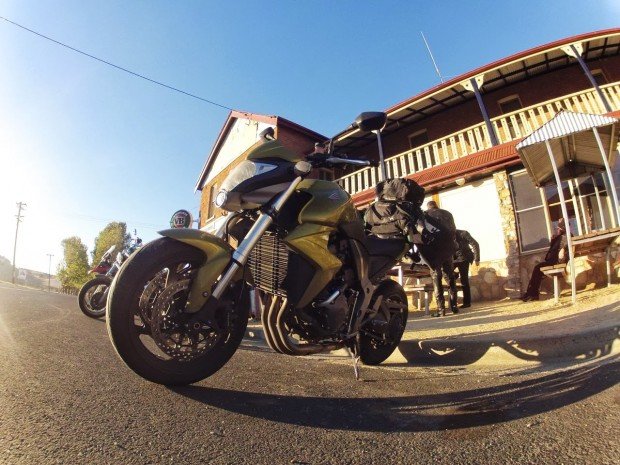 Here it is being bilious and green.

When you’re not riding with a will that will get your QC off the golf course, it does what inline four Hondas are supposed to do. You go and meet nice people on it. All it requires of you is you turn up, really.

I’m sure it will be tagged by many as a bland Honda. There is a solution to that.

Go and chase some superbikes on one and I am sure you will be pleasantly surprised.

Nick Cruth Nick suffers from PTSD and poverty from many years in the Bike industry. There is always a price to pay for free motorcycles. With the help of his BikeMe! brethren and small batch whiskey, things are improving.