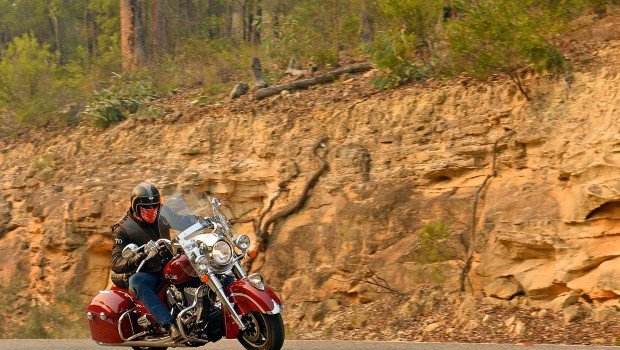 The speedo indicated an appalling speed.

I slitted my eyes and glanced down again.
Yep. An Appalling speed.

Woodbury was still ahead of me, but that was fine. Better he go clanking to the wall in police-chains than me.

Still, he was on the little Scout 60, so being ahead of me on the new Springfield was very impressive.

As they say in the classics, the big fellow was movin’ like the lice were fallin’ off him. 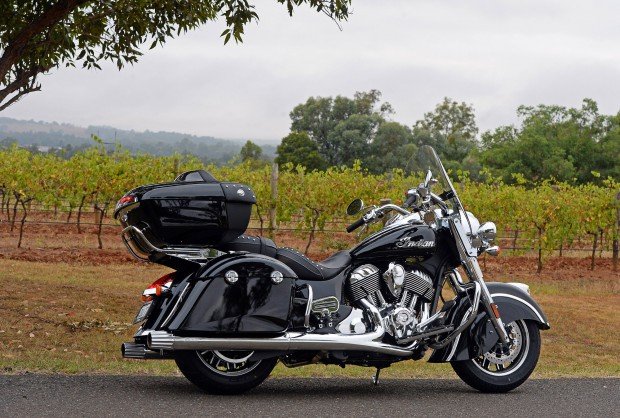 This is the fully-loaded Springfield. That stuff in the background is un-made wine. 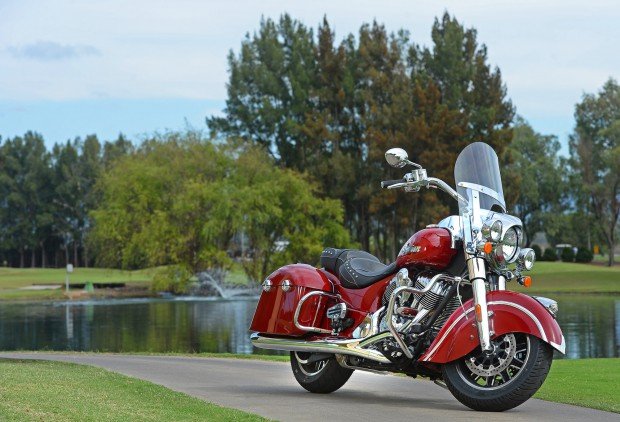 This is the Springfield without the top-box. That stuff in the background is un-made beer.

But then so was I. And so were Hedgie and Matho, who were behind me.

That never happens. Except on cruiser launches.

And it was happening right there and then, at the launch of the new Indian Springfield, which also wonderfully incorporated me riding the entire range 0f 2016 Indian models.

And I can put my hand on my heart and say there was not a group of Indian motorcycles anywhere on this planet that were ridden faster or harder over those two days.

The entire 2016 range had been comprehensively and thoroughly tested.

A glorious détente had been achieved. Normal workday tensions had been eased via vigorous applications of throttle.

Which is as it should be. 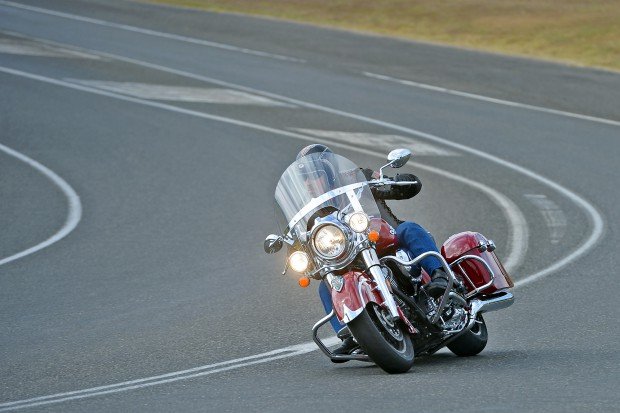 The screen does not allow chicks to see how hot you are. 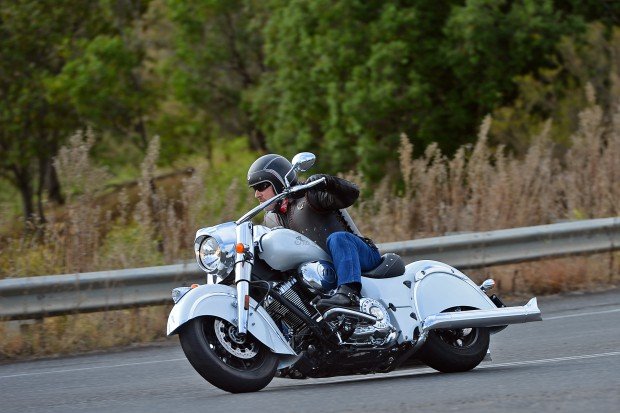 I loved the white one. It’s not a Springfield. But it’s white, with fishtails.

Now then, a little context, yes?

Firstly, cruisers are the only bikes which can be ridden to their absolute limits on public roads. They are also pretty much the only bikes on which I am competitive with the rest of the Australian press corps. A solid ten years of running from the police on a temperamental Shovelhead now stands me in very good stead.

Secondly, Indian showed great wisdom (and courage) in allowing the press corps to pass the lead rider, who was a) unfamiliar with the road; and b) a native Victorian, and thus completely obsessed with hidden speed cameras, of which there are none in NSW. But I didn’t tell him that until the end of the launch. 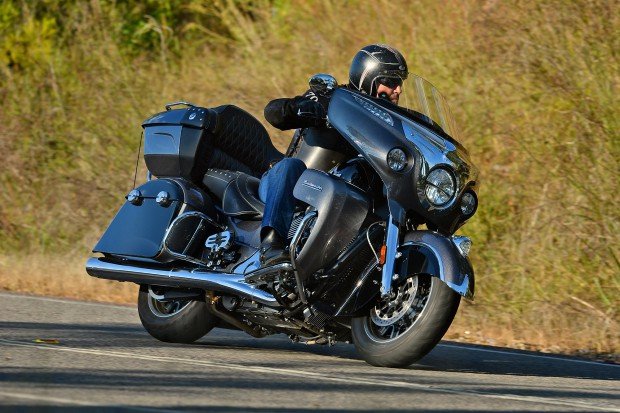 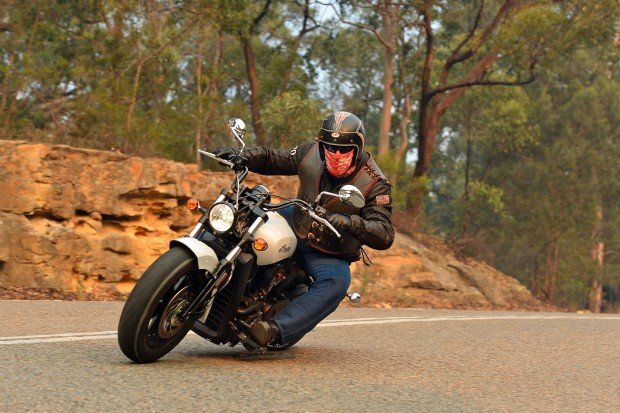 This is the Scout 60. In virginal white. 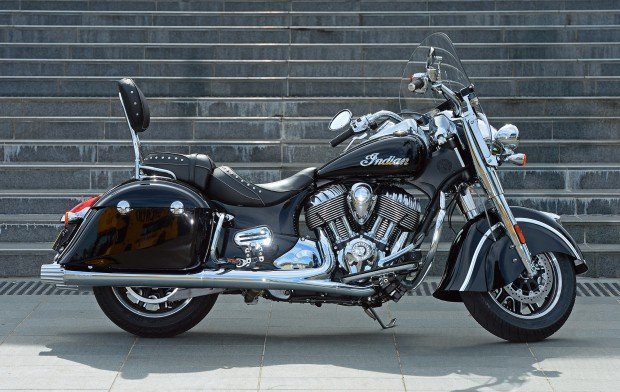 The Springfield in gloss black. With a leaning post for mummy.

Ordinarily, we are compelled to stay behind the lead rider at a press launch, and at cruiser launches, this can sometimes be a little frustrating, as the normal pace is somewhat staid.

But on this launch, which went up the infamous Putty Road and ended on Day One at a lovely Hunter Valley inn, which had a golf course, a dark blue pool the size of a footy field, and two-inch thick steaks, no consolation was required.

All that was required was that we ride what is traditionally a hard scratcher’s road on bikes that really aren’t designed for scratching, but acquit themselves remarkably well when called to do just that.

I also have to tell you that the blokes from Indian had no idea what was going on at the pointy end. They certainly would not have condoned it, and when they read about it, they will most certainly frown. 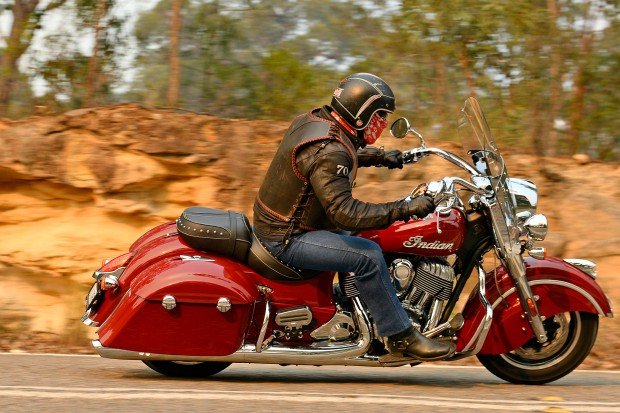 The ground-clearance is great. And my face-rag matches the bike. Winning! 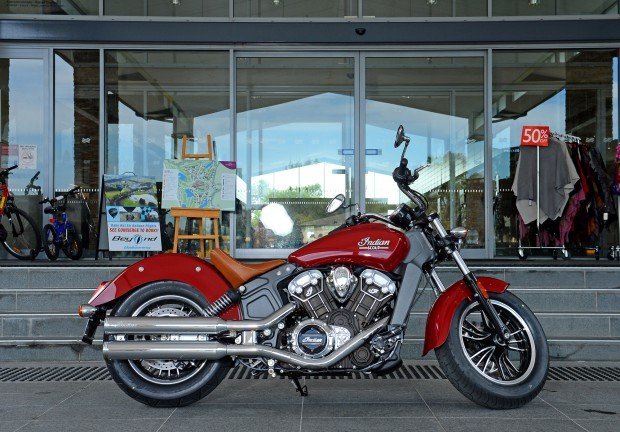 The big red Scout. And a sale on resort wear! 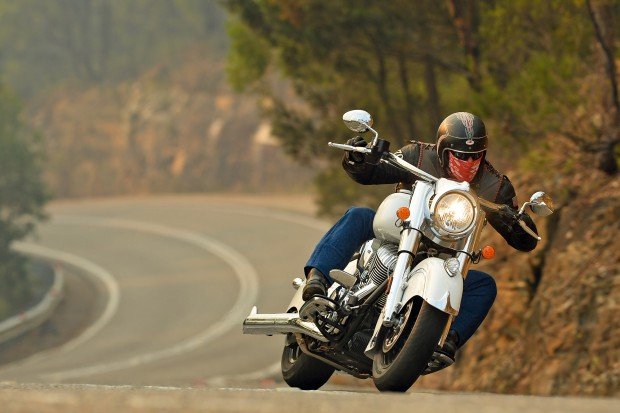 In my defence, I have to state that when a large crazy man passes you on a small white Indian Scout, and you’re sitting astride the metallic majesty that is a fully loaded Springfield, a chase will ensue.

But enough about my vanities.

Let us discuss the new Springfield and the rest of the 2016 offerings from Indian.

The Springfield is a new model. It is aimed directly at the Harley-Davidson Road King.

Bit of a bullseye, too, I reckon.

This is a truly stunning, capable, comfortable and majestic (yes, there’s that word again) cruiser.

How does it differ from the flagship Chieftain and the base model Classic?

The Chieftain has 25 degrees of rake, 150mm of trail, a 1669mm-long wheelbase and all the hard-luggage a traveller might need.

The Classic and the Vintage have 29 degrees of rake, 155mm of trail, a 1729mm-long wheelbase, and you have to tie your shit to the back, unless you have the Vintage, in which case you can pout it in the leather saddlebags.

It has 29 degrees of rake, 132mm of trail, a 1702mm-long wheelbase, and comes with panniers and an optional top-box. 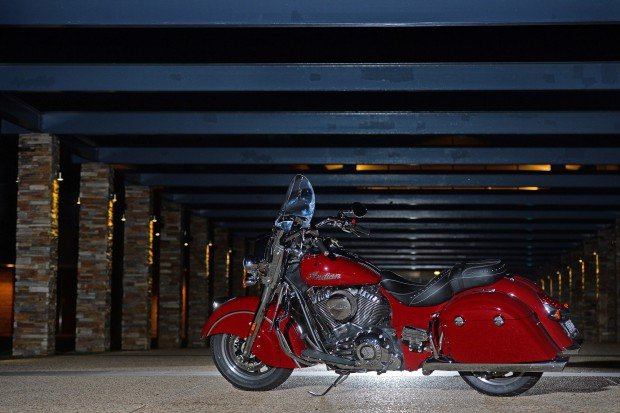 The photographer must have wheeled this Springfield into here after we went to bed. 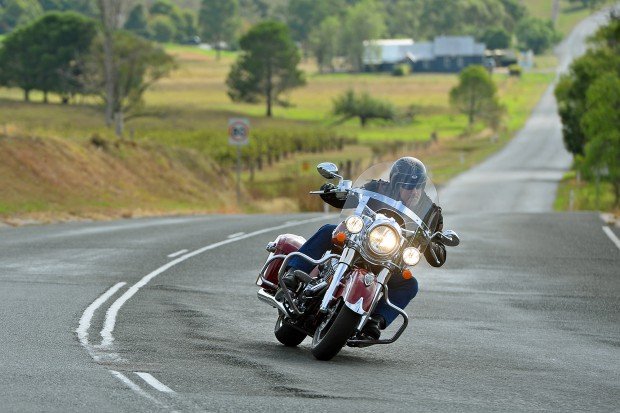 What does this mean on the road?

I was wondering that myself as I belted along after Woodbury, on a day so gorgeous it could have been a postcard.

If you’re MotoGP racer, minute changes to rake and trail will make a big difference at Valencia or Laguna Seca.

If you’re riding a big cruiser, you may notice that a steeper rake (25 degrees as opposed to 29 degrees) will cause the bike to turn in a little easier.

Then again, you may not. After all, you need to ride them back to back and at a goodly pace through some twisty bits to pick the difference. 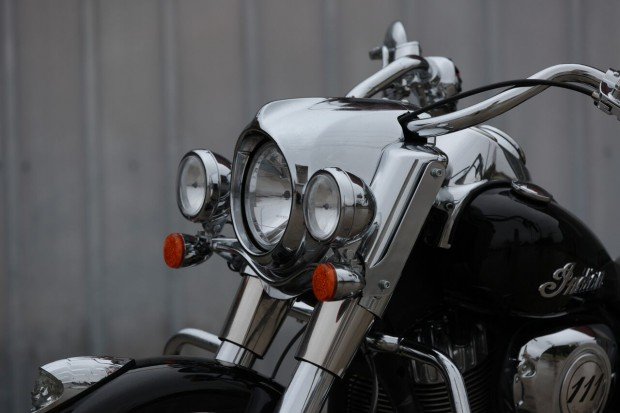 I love the crested headlight. 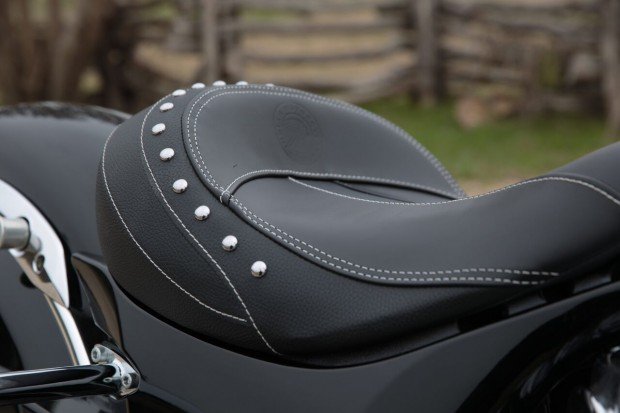 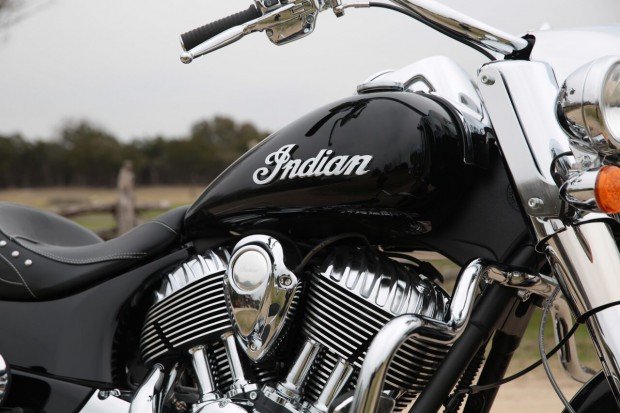 But buyers should be comforted to know that Indians can be punted very, very hard. They have class-leading suspension, a brilliant 111-cubic-inch motor, a sound and precise gearbox, good brakes, spot-on ergos, and ride head and shoulders as the best American V-twin cruiser on the roads right now.

Big call? Yeah, maybe. But I’ve ridden them all.

There’s a special place in my heart for the Indian Dark Horse (you can read about it HERE), which I actually covet, and would put in my garage tomorrow.

The Springfield is essentially the same bike, but it’s more touring oriented and can be fitted with a range of screens, and luggage options, and while it does come in black, it’s a glossy and less-menacing black than the all-matte-all-night Dark Horse. 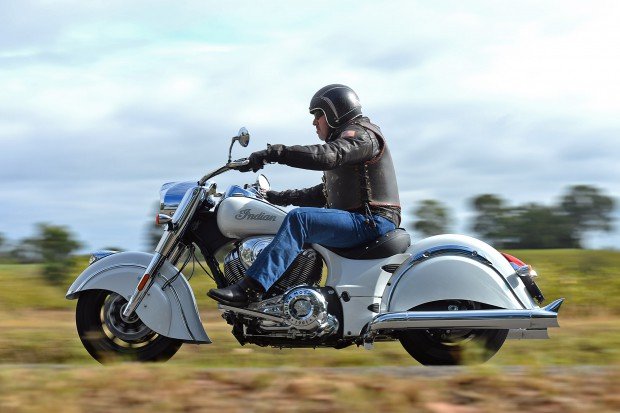 I spent some time on the white one. It made me feel pure. 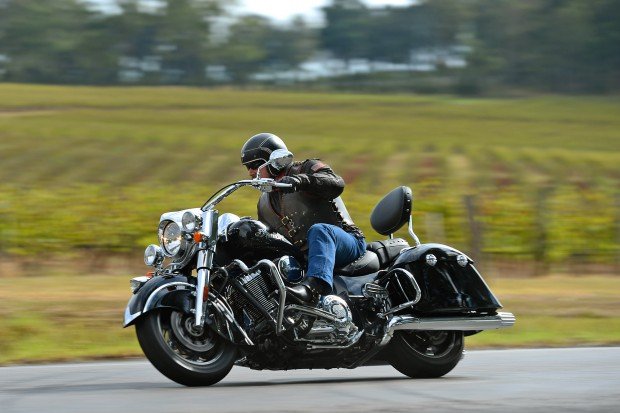 It could be used around the wineries as a transport vehicle for drunken mummies. “Hop on and hang on, love.”

I rode the whole range, including the flagship Roadmaster, and despite my misgivings about virginal white paintjobs, I very much enjoyed the all-white Vintage with the killer ‘beach’ handlebars.

I was pleasantly surprised by both the Scouts, who produced a good turn of speed, sounded throaty, and were happy to hurtle along with their throttles wide open for lengthy periods of time.

As was the entire range – a testament to very high build-quality.  I say once again, we were not gentle with them. They got ridden like horses stolen by Mexicans.

It really was a very spirited day of riding, and at the end of it all, nothing was leaking, everything was idling normally, and we stood around grinning at each other because it’s really quite invigorating to hammer these big ladies around at full throttle.

You don’t need to be doing 250km/h to excite yourself on a cruiser. So you can’t.

But you can easily get over-the-old-ton (160km/h) velocities on the Indians without it being harrowing and terrifying.

Ground clearance is excellent, and you really have to be on it hard and large before you start grinding footboards, or footpegs in the case of the Scouts. 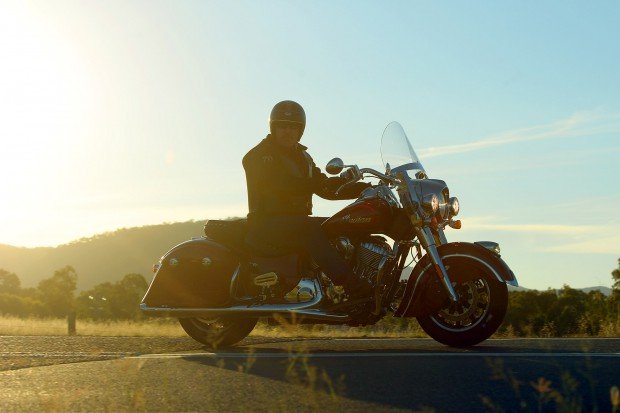 I was not a fan of the Perspex screen which I found reflected too much of the chrome and tended to vibrate a bit when you were on it…but then, I was probably on it quite a bit. It’s OK at 100km/h. Taller blokes were complaining about wind buffeting, but at the perfect crusier-riding height of six feet, I experienced no such issue. I just didn’t like the screen because it vibrated too much. So I took it off.

Anyway, I expect you’d like to know how such hefty ladies dance when you’re neck deep in Sydney’s Peak Hour traffic?
Pretty damn fine, as I discovered.

We’d stopped at the roadhouse on the Newcastle freeway to get fuel, and airline departure times were mentioned.

The blokes from Victoria had flights they had to be on in a few hours, thus it was decreed that I should lead the charge into Sydney and deliver them to the Ashfield showroom by the fastest direct way possible, for my traffic kung fu is strong.

It’s not like the others didn’t have an equal level of mastery on this battlefield. I just knew where I was going.

And so it came to pass that Woodbury, Withers, Hedgie and I hit it and hit it hard.

Sydney traffic became as nothing to us, and if you think you can’t lane-split effectively with an Indian, you’d be wrong. It was as invigorating a ride as I’ve had in many a long year. I like riding with professionals. They are predictable.

“I have no idea how you guys maintain that level of speed,” one of the Indian blokes said to me after he had arrived at the showroom. “I’m just terrified of speed cameras.”

“Welcome to NSW. They have to signpost ours,” I grinned at him. “And local knowledge is everything.”

“You saw that Highway Patrol parked on the freeway?” he asked. 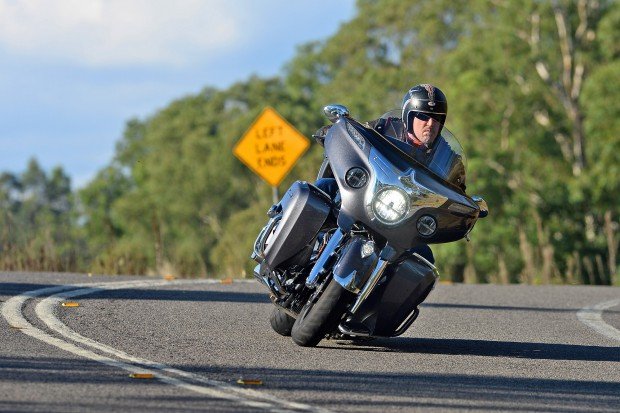 A man could ride a long way on this.

“I did. He is part of Operation Freeflow. He sits on the side of the road for hours scanning rego plates and making sure he can respond if there is an incident. He’s certainly not interested in a bunch of riders doing maybe ten kay over the limit, which is not to say we were speeding. We were not. We were just riding in a way that would not impede traffic, so we were doing our bit to assist in the freedom of…um, stuff and things.”

“It was fantastic to see,” he smiled.

“It was fantastic to do,” I smiled back.

Over the next day or so I gathered my thoughts and considered what I needed to write about the Springfield and the rest of the 2016 range.

I guess it comes down to what you need to know, especially if you’re in the market for a new American cruiser, and you’re considering the Indian range.

I’m of the view you should consider it very seriously.

Because what you should know is that the Springfield is a hugely capable and comfortable cruiser, and a direct shot straight into the guts of Harley’s excellent Road King.

Is it the right Indian for you?
Only you can answer that question, and you now have quite a few models to choose from.

The big cruisers are majestic (yes, that is the word for them) and the Scouts are sweet-sounding, lightweight rocketships – relatively speaking of course. 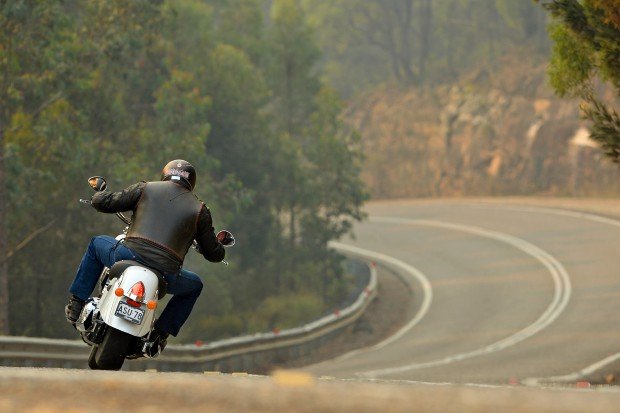