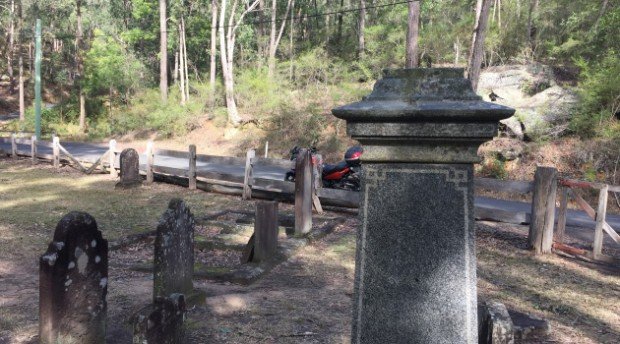 It’s good to be by water. As long as you don’t get any in your mouth, of course.  I think it’s a natural part of the human condition, and very therapeutic. Remember that movie where Jack Nicholson gets arrested and pleads insanity and gets sent to the rathouse and it’s run by Hillary Clinton and she hates him and he takes all the rats fishing and they start to get better?

And then Hillary’s people lobotomize him. Sad!

I remembered the plot, if not the name, so after a stressful week I headed for Wiseman’s Ferry on the ‘Strom, and crossed the Hawkesbury River, and turned west. The road follows the Hawkesbury River until it gets to where the MacDonald River joins it, and then it follows that. It’s a dirt road, which suited me fine.

It’s scenic, and you have the river on your left for about twenty kilometres. It relaxed me a little, but it wasn’t as therapeutic as I thought it would be. I remembered then that the rats on the boat were killing fish, which I wasn’t; and they had a stripper on board, which I didn’t. I remember from my early days that both of these are good stress relievers.

The road turns to tar a little before the hamlet of St Albans, and I stopped at an old bush cemetery to stretch and commune with the dead. It was very peaceful. The dead don’t talk much, which also suited me fine. I watched the birds. A pair of black faced cuckoo shrikes perched on a wire by the road, and a spangled drongo alighted on a tombstone. You don’t see one of THEM every day.

St Albans has a pub, the Settlers Arms. It was crowded. I parked near a R1200GS, bought a beer and sat at a picnic table near the bikes. A Chinese couple asked in broken English if the rest of the table was taken and I said “Please. Sit. Be my guest.”

They sat at the other end of the table. The guy went and got food and drinks. I sipped my beer. A guy in a Dainese touring jacket came out of the pub and walked towards the R1200GS. He said hi, and asked if I was just out for the day, and told me that he had decided earlier that it was such a nice day that he would take Silver for a ride.

“You named your motorcycle?” I asked, and he nodded happily.

“Me too”, I said. “I call mine Grass Mud Horse. It sounds better in Mandarin.”

The Chinese guy coughed suddenly, and some of his drink went on his woman’s food. She glared at him. Dainese guy said “are you okay?” and the Chinese guy nodded.

Dainese guy said “Well, nice to meet you”, put his helmet on and left. Chinese woman gave up glaring at Chinese guy and started glaring at me.

I know when I’m not welcome. I rode over the bridge to the west side of the MacDonald River and headed south. It’s a pleasant winding tar road. Twenty kilometres on I was stopped in a queue waiting for the Webbs Creek Ferry.

A sign said “NOTICE. OCCUPANTS TO REMAIN IN VEHICLE”. Someone had painted over the “OCCU” with white paint.

I was home within the hour. The girl-child was watching Shokugeki no Soma on the television. “Hi Dad,” she said.

“If a man in a Dainese jacket types Grass Mud Horse into Google and there is no-one around to hear him, does he make a sound?” I asked.