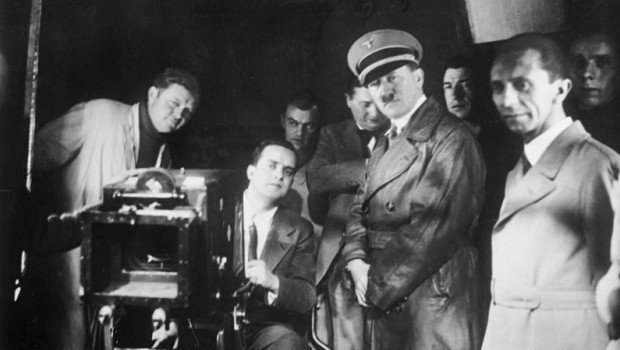 Never, ever, ever underestimate the power of propaganda. It is relentless and awesome in its effectiveness. The results are all around us – poisoning our clarity of thought and trampling whatever innate logic we once possessed.

Once upon a time, bike riders had a certain cynical immunity to it. We laughed at the horseshit geysering from the distended bottoms of spin doctors employed to keep us tuned the ‘correct’ wavelength, and went about our business.

But not any more.

Those who could think for themselves are dying out, perishing in the tar pits of evolution like so many trumpeting mastodons. And they are being replaced by creatures with minds forever numbed into complacency and conformity.

As motorcycling has expanded its market and become accessible to people, who, if there was a God, would have bought cars instead (or possibly died of some supremely painful cancer), the propaganda suddenly found itself planted in some rather fertile ground.

There are now motorcyclists who publicly condemn and damn other motorcyclists for speeding, lane-splitting, not wearing a helmet, riding in shorts – hell, you name it, if it doesn’t fit with their government-funded brainwashing, it is evil incarnate and must be stamped out.

At the moment, most of this neo-Bolshevism is confined to Internet forums awash with beginners, spastics and infantile overlords with delusions of wit. Once in a while, some impish bike magazine editor will publish a letter from one of these chromosome-depleted jeeters, but that’s surely only for comedic effect and not because that good burgher’s opinion was valid.

To be valid, an opinion must be properly informed. Otherwise you are merely repeating propaganda (ie. Speed Kills, The Road Is There To Share, P-Platers Need To Be Chemically Sterilised Before They Slaughter Our Children, Pictures Of Women In Bikinis Are An Affront To The Sanctity Of The Earth Mother) that has been designed to get you to think like that.

Nodding your head in agreement like a mule at slogans requires none of that and is much easier.

I know that some of you are frightened and need to be held. The world is a spooky place and there is great comfort to be found in certain beliefs – ie. My government always has my best interests at heart, insurance companies are there to help, my vote counts, if we ban something it will go away, pictures of pretty girls in underpants destroy the social fabric of our civilisation, etc.

It’s a lot less comforting to properly inform yourself that the government views your interests as an impediment to its agenda of rule, insurance companies are not your friends, your vote doesn’t count cos you lack any grasp of what you’re voting for, prohibition never works, and pictures of pretty girls in their undies only make fat ugly chicks feel inadequate.

That is the cold hard truth and you know it.

If you do not, then you live in a propaganda-based denial.

This manipulation of your opinion must be rejected like you reject the bile of Political Correctness, religious zealotry, and line dancing.

Motorcyclists who have opinions based on nothing more than catchy PR slogans and in-depth viewings of commercial current affairs programs on their TVs, must be made to understand that their opinions are worthless, cos they are not really opinions at all. They are nothing but the kow-towing of a slave to the directions of its master.

Motorcycling was traditionally the realm of those who enjoyed a certain sense of visceral freedom, both of movement and of thought. It will always be that for me, but like I said, the tar pit awaits my bones – and if the next generation of riders keeps swallowing the propaganda without question and repeating it back as ‘informed opinion’, then all is ultimately lost.

Motorcycling would have become totally mainstream and its adherents nothing but herd animals for whom all the thinking has been done.

The propaganda would have done its job. Acceptance will be total, and the gross lie of ‘public interest’ will rule the colourless void my son will be forced to live in.

One immensely famous man once observed: “…the rank and file are usually much more primitive than we imagine. Propaganda must therefore always be essentially simple and repetitious…it must confine itself to a few points and repeat them over and over.” Another immensely famous man viewed it thus: “Propaganda is a means to an end. Its purpose is to lead people to an understanding that will allow them to willingly and without internal resistance devote themselves to the tasks and goals of a superior leadership.”

These men were Hitler and Goebbels, and in this, they were dead right.