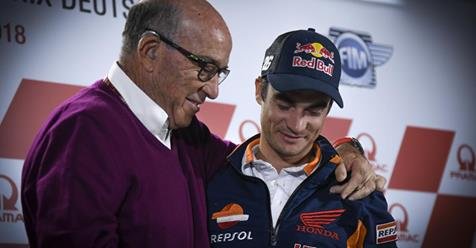 “What will the Clinica Mobile now do with all those plastic dwarf collarbones it has bought in bulk to replace the ones you turn into powder every third race?”

I have not given you permission to retire. How can you possibly imagine I would? Of course I understand you can no longer be a Repsol and that you must make way for the Greatest Repsol of all time (me, not that grinning six-horse-toothed puta), but you cannot retire.

Who will Carmelo dress up as Sailor Moon now? And do not say Rabat because he does not have the legs to carry that off.

There are many other things you can do and still be in MotoGP.

Firstly, you could take the criminal Redding to his see his parole officer every week. He should not be allowed to walk the streets without supervision. You are so short he will think you are his little brother and not rob you.

Secondly, you can take the dog-murderer Crutchlow to see an eye specialist. And when they have sewed his eyes straight, it will be your job to see that he finishes in sixth place all the time.

Obviously, that is a position you are both familiar with, yes?

Thirdly, I think you will be happy to hold my cape when I sweep onto the starting grid at each race. I will get a shorter cape to make up for the fact you are no bigger than a wheel, but I think if you can hold your arms up over your head and wear some platform shoes, it will be OK.

I will be honest with you. I am now on the cusp of winning this championship and the next four in a row. It will lessen my pleasure if you are not there to see this. Think of how worthless you will feel if you cannot bask in the glow of my sexy, sexy butter.

Imagine how it will feel not to be present when I send the Yellow Puta a bus ticket to the old people’s home in Tavullia where they will bathe him kerosene and make him eat soft gnocchi made with the meat of street-cats.

I tell you honestly, Benni, you simply cannot retire. It will not be the same without you. What will the Clinica Mobile now do with all those plastic dwarf collarbones it has bought in bulk to replace the ones you turn into powder every third race?

Is it now up to me to be the voice of reason and dignity in disputes between that weeping millet-bag of misery in my team, and that terrible French circus acrobat who wishes he was in my team?

But if you must go and grow tomatoes and raise chickens like an old man who is only the height of a pair of boots, then let me be the most famous person to salute you and remind you that you never beat me.

You, Benni Ponderosa, will be remembered as being the shortest dwarf never to have beaten the Great Mamba of Sparta.

I think that will be your legacy.