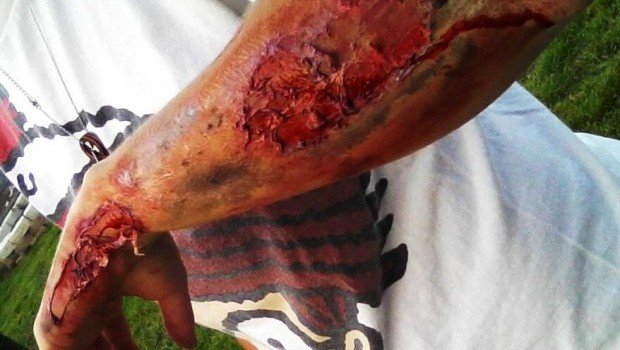 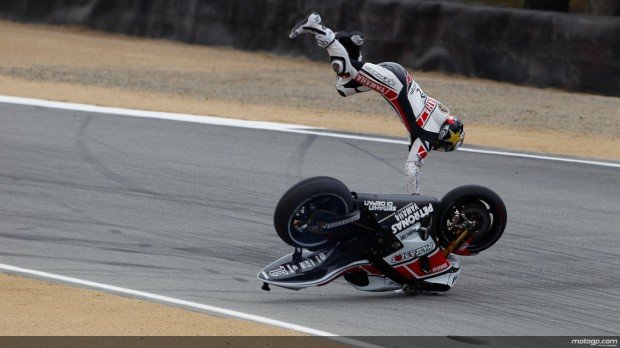 BIKE ME! is a place where you’ll encounter some oft-repeated statements and questions. If you’re new, you’ll be asked your thoughts on a range of subjects. Is there a place for beetroot on a burger? Is the movie 300 the height of awesome? Who among the current crop of MotoGP racers are kings among men, and who are nail polish-wearing, limp-wristed girly men?

If you’re new, and you decide that going for a ride with some of the members sounds like a splendid way to pass the time, then you’ll be told the same two things. The first is to show up on time, because no one will wait for you no matter how well you can provide excuses for poor time management. The second is to not break Rule #1. And because you’re new and probably aren’t aware, Rule #1 is rather simple: Don’t fucking fall off.

To best equip you, dear reader, with a working knowledge of what happens to those who break Rule #1, I have undertaken to examine what data is available and provide it to you in a creamy, gluten-free, easily digestible form.

Should you find that the bike has ceased handling like it’s on rails, and that creamy wave of torque has chosen to dump you head over arse, there are three factors that will come into play: What you hit, how fast you hit it, and what part of your body you decide to hit it with.

There is one thing that in most situations you can’t avoid hitting, which is the road. Due to the sheer fuckery of gravity, you will always find your arse sliding across the bitumen. When you hit the road, you will be subject to impact injuries as gravity makes you its bitch, and abrasion injuries as friction fucks your shit up. 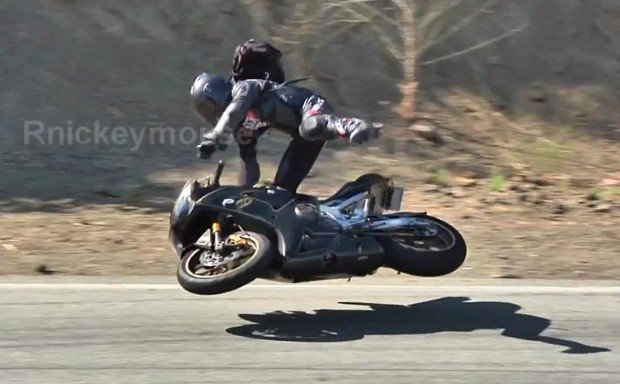 This has gone so magnificently to shit, it’s hard not to be in awe.

The degree of impact injury when you encounter the road surface is less dependent on the speed you are travelling, and more dependent on which method you’ve used to break Rule #1. If you’ve lost the front and find yourself low-siding, chances are the impact force will be low, as you will suffer a gradual, mediated fall as the bike slides out from underneath you. A common injury encountered where individuals fall is a “FOOSH” injury, which refers to a “fall on outstretched hand” where your hand is used as a breakfall, resulting in the transfer of energy into the wrist, radius, and ulna. This can result in soft tissue trauma to the surrounding connective tissue, as well as fractures to the bone structures. This is not ridiculously painful, and the feelings of shame for ending up arse over tit will usually overwhelm any pain you will feel for a while. It will sneak up on you though. The upside of this, is that your arm absorbs a fair amount of the energy, so while you may need to switch wanking arms for a few weeks, in a lot of situations you may get away without any other serious injury. 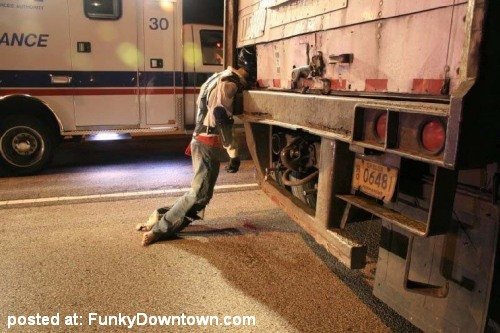 Do try and avoid head-butting stuff. Even with a helmet.

If it’s always a race (and it is) and your ham-fistedness while seeking a podium has fed too much power into the rear wheel, you may find yourself losing traction then briefly regaining it. What occurs next is the cause for the utterance of “OH FUCK” from anyone observing your antics, as you are launched into a near-earth orbit before tumbling back to the ground. Alternatively, if you’ve been riding along and decided that you’d like to occupy the same space as, say, a car, some armco or a friendly kangaroo, you may also find yourself tumbling through the sky before impacting the road. Chances are that your impact force will be rather high in these situations, as your body has time to accelerate briefly before you impact the road. This is where you’ll really fuck yourself up with a FOOSH injury alongside a broken collarbone, a fucked hip, or a smashed head, depending on how you land. 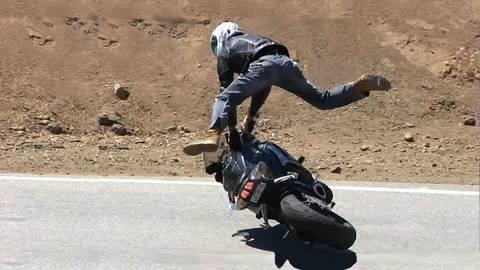 A classic high-side. You cannot hear the screaming. But it is there.

And this is all before you start to slide.

Now that you’ve got a few nice fractures and some soft tissue damage to go with your wounded pride, we’ll add some gravel rash to the mix.

Gravel rash, or road rash, occurs when skin is in contact with the surface of the road as the body travels at speed. The surface of the road is rather jagged at the micro level, and as you slide across it, your skin will be subject to an experience not far removed from that of cheese being grated. If you were moving the cheese at 60km/h or greater. As you can imagine, you will lose a fair bit of skin as this happens. If you’ve managed to fuck yourself up with particular efficacy, you may also experience incredible pain as the surface of the skin is scraped away to the level of the nerve endings. Additionally, the friction will generate heat, which can lead to minor burns. 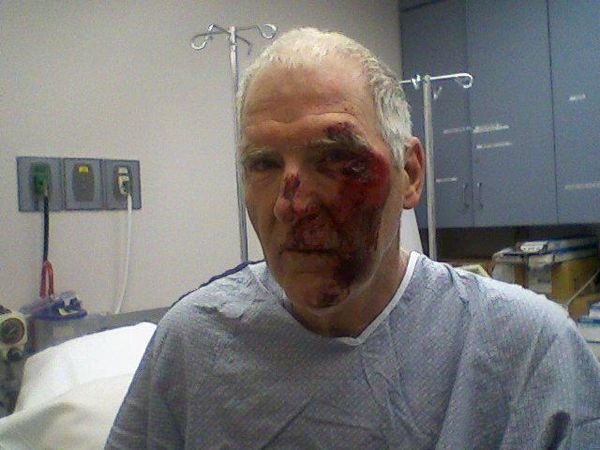 Try not to face-plant. Chicks dig scars, but not ones that look like this. Unless they’re on tequila, in which case you’re on.

Serious cases of gravel rash can require skin grafts, as damage is done to not only the surface layers of skin, but the dermis below. This will mess with things like blood flow and nerve innervation resulting in the loss of the ability of the skin to heal. But hey, chicks dig scars, so you’ll have that going for you, which is nice.

If you’re wearing full leathers, decent textile, or some fancy Kevlar lined shit, chances are your gear will save you from most if not all harm due to abrasion. This gear is designed in a lot of situations specifically for its abrasion resistance. If you’ve got leathers, they do a beaut job of sliding along all kinds of shit while providing a barrier between your skin and that nasty, evil bitumen. This does still generate heat, however, and it’s not unheard of for very minor burns to occur. If you have some textile gear, abrasion resistance varies greatly on the type and density (measured in denier) of the fabric used. 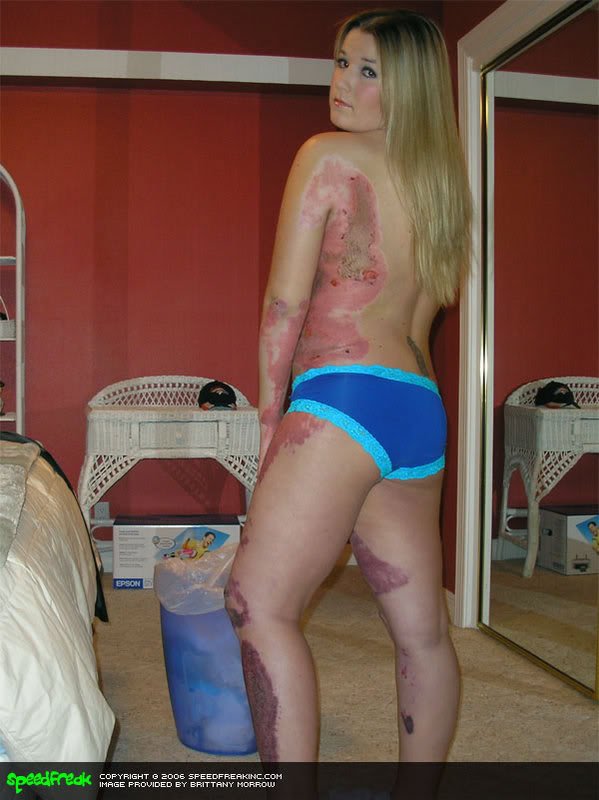 Brittany Horrow has become the poster-girl for the ATTGATT zealots. It is not hard to see why.

If you’re cruising along with your T-shirt on, handing out tickets to the gun-show before you eat shit, well, now you have a date with the wire brush to remove little souvenirs from your freshly fucked-up skin. This is an excruciating process as a wire brush scrapes along exposed nerve endings and damaged skin, removing the little bits of gravel that decided to call your dermis home. 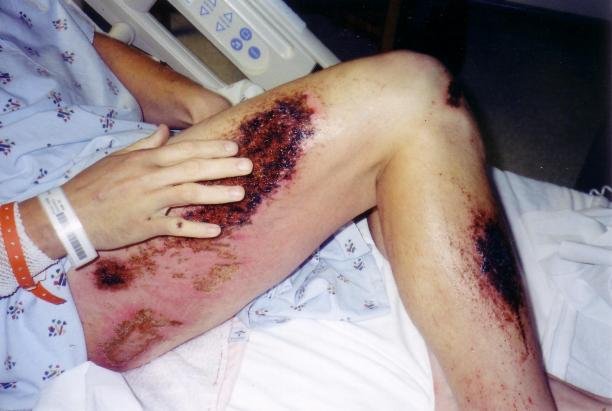 This is when it starts to get really itchy. Do not scratch it. You will regret it if you do.

So after you have fallen down and rolled along for a while, all that remains is for you to stop. If you’re lucky, this will be due to the friction between yourself and whatever surface you find yourself tumbling along. If you’re unlucky, the environment will step in to end your tumble prematurely. This is where the speed you were travelling at before your riding glory so unexpectedly came to an end will come into play. 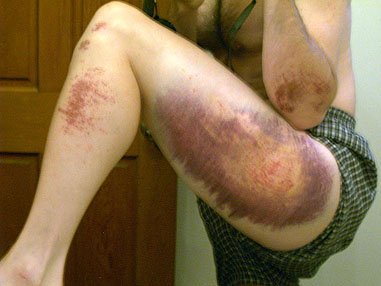 Bruising looks really cool after a few days. Like a crazy painting done by a mad man with his own filth.

Motorcyclists are susceptible to a whole gamut of injuries when they come to a stop suddenly with the aid of the environment. Impact at speed to the head or chest can be life threatening. If you smash your noggin into a tree at 100km/h, you’ll likely do some damage to your brain as it isn’t capable of handling deceleration terribly well. Given the fact that it’s consistency is close to that of cottage cheese, it will slam into the inside of your skull at great speed, which will cause damage to the structure of the brain, alongside swelling. As your skull is essentially a closed environment, swelling is generally agreed to be rather bad.

If you use your abdomen as an anchor to halt your progress, the outcomes can be varied. The biggest risk is that you’ll cause trauma to your lungs or the surrounding pleura, either by smashing them around inside your thoracic cavity, or snapping off a rib and sending it on a bloody holiday to lungtown. This will cause a tension pneumothorax, where air essentially leaks out of your lung into the pleura, and isn’t able to re-enter. The buildup of pressure will reduce the ability of your lungs to inhale or exhale, while venous return of blood to your heart is hampered as veins in your chest become kinked. Long story short, if someone isn’t around to stab you in the chest, you’re a wee bit fucked. 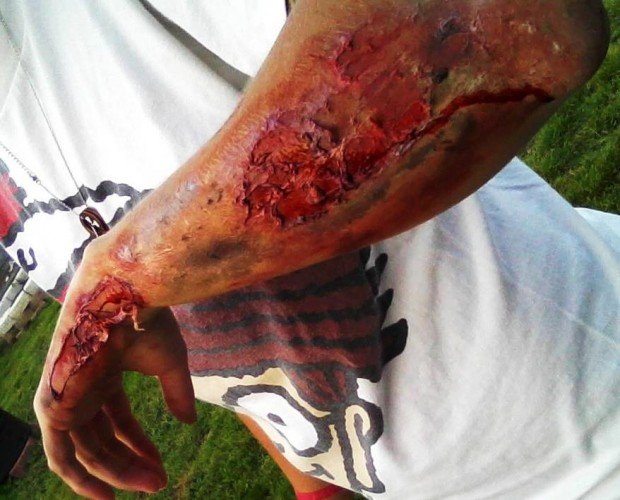 This is road-rash make-up. Cool, huh?

Best case scenario is that if you’re playing a game of chicken with a tree, you use your legs or arms to soften the impact. You’ll likely fuck them up rather completely, but you’ll still live on as a mangled mess of bone and flesh. The higher the impact energy, the higher the chance of compound fractures, dislocation, and connective tissue damage. The degree of this will determine how well you’re able to do every day things like eat, drink and take a piss.

If you’ve had a low speed fuckup, this is where you get up, brush yourself off, and prepare for everyone to ridicule you mercilessly. If you’ve highsided at great speed and slid into the Armco at umptillion miles an hour, this is where after you’ve come to a halt as a bleeding, horrific abstract of the person you used to be, you worry about blood loss. The ridicule comes if no one has to testify in court. 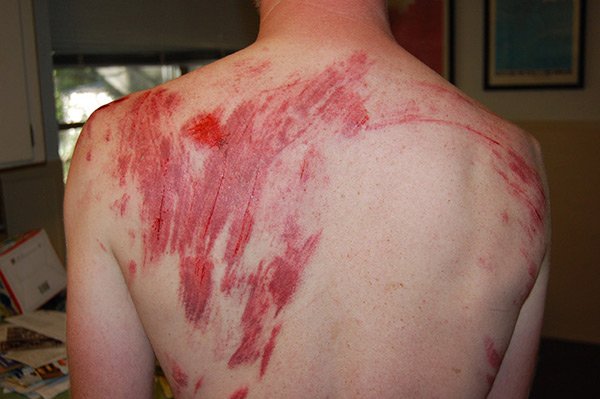 Beautifully done. Not too deep. Should heal nicely.

Internal blood loss is the big worry, as it’s termed as uncontrollable bleeding. There is little that anything other than surgery is able to do to prevent the loss of blood inside your body. Use the time you have left to guilt everyone into not hitting on your missus.

External haemorrhage is a different kettle of fish, as unless you’ve managed to really do some damage to multiple sections of your body, it’s the kind of thing where painful, direct pressure can usually stem the flow long enough for paramedics to pump you full of drugs and saline.

Of course, there is a way to avoid all this unpleasantness.

Nick B NickB spends most of his free time convincing people he's not as much of an idiot as he appears to be. He also rides motorcycles and studies paramedicine, making him a handy fellow to have around if you crash. You'll just have to wait for him to catch up.