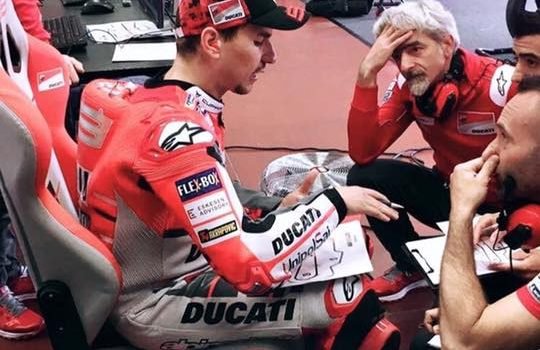 “We can’t go outside because Rossi’s fans will kill us all like rats, put your head on a pole and run through the streets of Scarperia e San Piero screaming his name.”

I cannot squat here anymore. My pelvis has turned into bone-paste and all the veins in my legs have collapsed like the Venezuelan economy.

The crew and I have been kneeling here so long that Paolo has soiled himself and can no longer abide the feral stench coming from his pants. He has to hold his nose.

We have been in Mugello for the past eight hours and we have been sitting here in front of you for seven-and-a-half of those hours.

We can’t go outside because Rossi’s fans will kill us all like rats, put your head on a pole and run through the streets of Scarperia e San Piero screaming his name.

So we sit here. In front of you. And a bit below you. As you commanded.

And what are you doing? Well, I know what you’re not doing.

You’re not riding around Mugello at the speed of a thousand raped apes, smashing lap records, and leaving long liquorice lines of melted rubber in your wake.

You’re not telling us what needs to happen to your Ducati so you can ride it like that. Even that idiot Simeon, who could not come any further last if he started the day after the race, and who hasn’t shifted his vintage 900SD out of fourth gear since Qatar, offers us some insight.

“It scares the shit out of me in Turn Five!” he yelps.

“It feels like I’m going to crash in Turn Two,” he whines.

“It’s making a strange “GGLLEEERRRRRGGHH” noise when I pull the clutch in,” he says, his eyes rolling in confusion.

So we make adjustments and we send him out again, wailing like a widow and trembling like a shitting dog. Even Tits Rabbit feels sorry for him.

You, on the other hand, want to talk about what a massive arse-goat Rossi is, how he stole your training methods, and how you’ve been pissing into Dovi’s energy drinks for the last month.

The only time you mention the bike is to tell us it needs to be a different red colour. “A faster red colour with more blue in it,” you said an hour ago. I know because I wrote it down next to the other instructions you’ve suppled.

“Teach the Mad-Eyed English puta how to make the corrida then kill him like a bull by driving a sword through the back of his neck. Olé!”

But just so you know, the only adjustment left to make to your bike seat is to take it off and push it deep into my colon so I will look like I’m pregnant with a toaster.

There are no more telemetries available. You already have all the telemetries. Stop asking. Seriously.

What you do not have are any fast laps. On any track anywhere on this earth. And the longer we sit here while our bones turn into cheese, our sphincters relax, and our bladders surrender their contents, the less chance there seems to be of you putting in any fast laps.

My head hurts, George. There is a pounding behind my eyes, I smell burning hair, and in my mouth there’s the taste of metal. It’s possible that I have sprouted a brain tumour in the last 20 minutes.

I really hope that’s the case. Because then this ruined raft of misery that is floating upon this river of Spanish tragedy and blown by the cold winds of fuck my life, will soon end.

And I shall be free.