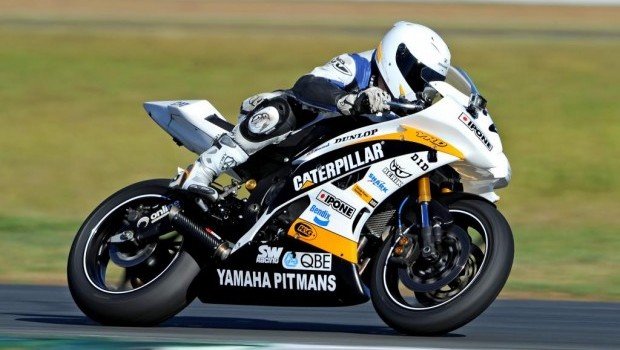 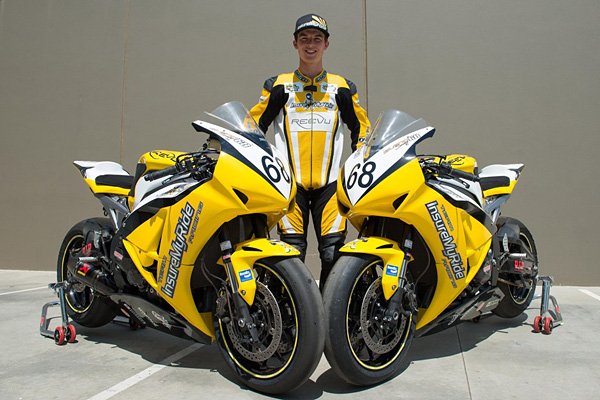 Glen Scott stands ready to take on all comers.

You’d have to be some kind of cross-eyed glass licker not to see that Australian motorcycle racing is in the toilet.

And it’s been there for some time.

Which is a bit of a shame, because the racing itself is as fabulous as it’s ever been. From the fire-eating top predators in the ASBK series to the fearless and mostly beardless young lions bashing fairings in the Superstock and Supersport classes, there is some graveyard serious competition going on out there.

Now I am utterly disinterested providing any more publicity or fuel or even a despairing sigh for, to and at the endless and utterly boring-as-fuck shitfight between Yarrive Konsky and Terry O’Neill and their competing racing series’.

But I’ll tell you what I am interested in.

I am interested in big crowds attending the racing. You know, crowds like the ones who used to attend the Castrol Six Hour at Amaroo, or at Oran Park, or at Bathurst, the true and spiritual home of the Australian Motorcycle Grand Prix.

It’s a not all that hard to pin-point why people stopped coming to the races, and why crowds have dwindled and continue to do so. The goldfish-brained Internet generation is certainly an element, but the Supercar promoters are aware of this and are dealing with it. Shitty facilities and stands? Yep, that is a factor. Insanely overzealous and expensive policing? Very much an important deterrent to people going to events.

But on a more base level, there is a combination of factors. 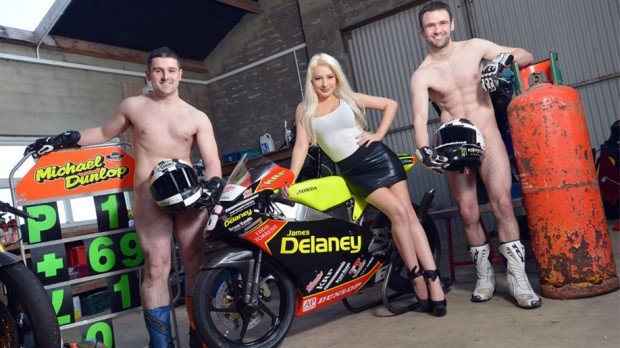 The Dunlop brothers in England get their gear off, surround a nice blonde with their nudity and support a charity every bloke can understand. Top class!

1. Promotion and public relations that appears to be run exclusively by the cortex-free inmates of some sheltered workshop in a faraway non-English-speaking country.

2. An utter dearth of anything for the public to do at the racetrack except watch the races, which they can’t really see all that well thanks to the fact that there are no big screens. And no, two stunt shows by Lukey Luke, as brilliant as he is, is not enough. Don’t people like live music anymore? Are bike shows old hat? Do swap meets suck that many balls? Would a racing or lifestyle memorabilia show be interesting to some people? What about a photo exhibition of old racers/bikes/racing? How about a barber who does straight-razor shaves? Burn-out comps? Air-brush artists? Dog breeders? Clowns? Dancing girls. Gypsy fortune tellers? A mariachi band?

3. A similar dearth of anything for the public to spend its money on at the racetrack (apart from the insanely exorbitant entry fee). No team T-shirts, no real team merchandise, no decent food, no bike gear, no bike bling, no nothing, apart from some wanderer flogging Sons of Anarchy crap and bandannas with skulls on them. Yes, I know there is the odd team truck there, but it’s not like any of them radiate bon homie and welcome the wandering punters with killer promo chicks happy to pose for pictures with their kids. It breaks my heart to see beaut racers like the sparklingly wonderful Sophie Lovett trying her best to sell a few Team Kawasaki items from a small table at the back of the pits, while still trying to conduct a race campaign. Are you kidding me? Is that what this sport has come to in 2013? How about the controlling body takes some of the millions of dollars that are poured into its coffers by the racers and the government and maybe shell a bit of it out and actually pay some interesting people to come and hawk their wares at their race meetings? Would that work better than demanding insane amounts of money for people to run stalls or even enter the track? 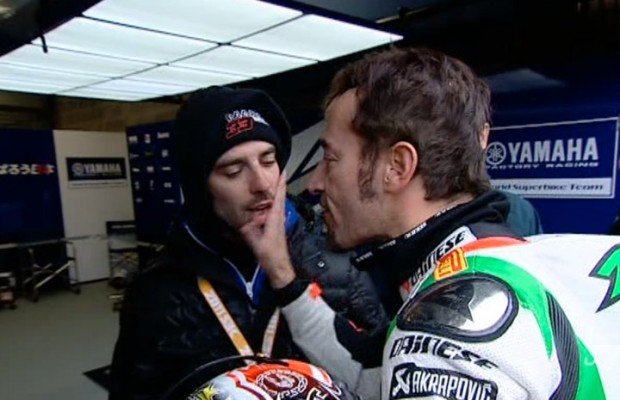 Max gives Marco a bit of a slap in the pits. In front of the cameras. The man is a self-promoting genius.

Or is this all too fucken hard? Couldn’t anyone be fucked doing or organising any of this? Is it that no-one knows where to start with this kinda stuff? Or is it that none of the promoters has a fucken clue and exist in some alternative reality where it is deemed that the racing itself is enough to draw the massive crowds?

Yeah, that’s what I figured. It has to be one of those things, huh?

And actually, the people who benefit financially from all these races don’t actually give a shit because they still get their money from the racers and the teams to hold these amateur-hour, village-shit-heap events, which, coincidentally, feature some of the best motorcycle racers in the world. Racers who love racing so much they will race for free and still pay all the bullshit fees demanded of them by the sports controlling bodies.

And there’s certainly no glamour.

So that leaves the racers and the punters to make things work. Because as sure as shit smells in the sun, the myrmidons who run Australian motorcycle racing aren’t about to suddenly get better at it.

What do we punters want?

Great racing? Sure. We got that.

What else do we want? 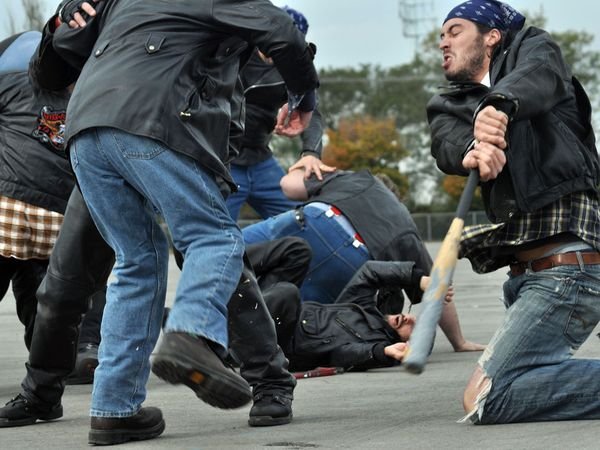 “Pass me on Turn Four again, ya prick!”

We want drama. We want conflict. We want to know the racers as human beings whom we care about and have opinions about and are therefore interested enough about them on an abstract personal level to come and see them race.

We wanna see Glenn Allerton being restrained by his pit crew as he goes the wild war ranga on Wayne Maxwell. We wanna see Wayne telling Glenn to have sex with his race suit and questioning his parentage in the media and out the back of the pit garage. We wanna see Stauffer and Waters pushing each other on the grid, and later throwing bike parts at each other in the pits. We wanna see Glenn Scott and Levy Day boxing on in the shitters after Race One. We wanna see Phillis dropping the Peoples’ Elbow into Gilesy’s guts at the podium ceremony. 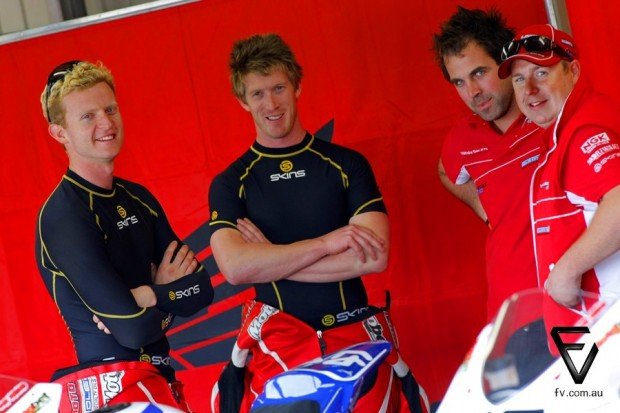 We want, nay, we demand to see personal drama and individual conflict. We want to see the soap opera behind the racing. We want the Biaggi/Rossi war. We want the Rainey/Schwantz cage-fight. We want team-managers and crew-chiefs engaged in vituperative shit-slinging matches in public and out loud and proud.

What? That kind of behaviour will upset the sponsors?

I would think the sponsors would be more pissed about the empty grandstands and shitty marketing they’re getting for their hard-earned money, than seeing a pair of racers throw their toys out of their prams. I know I would be. 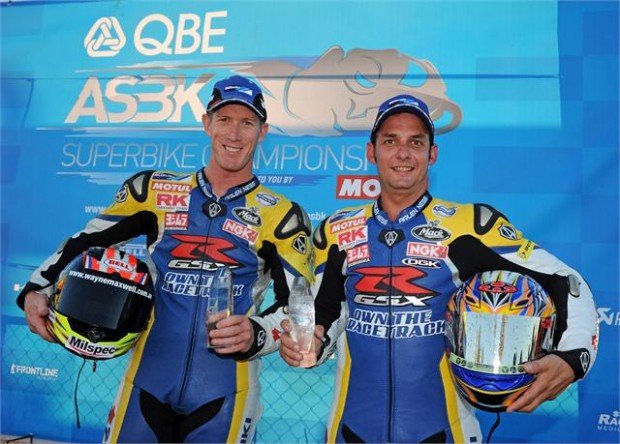 Robbie Bugden (right) looks like he could go a few rounds. Good on him. Maxwell should find out, cos he looks pretty handy too.

But fuck them if they get upset.

There are always other sponsors who understand the power of the draw of a genuinely engaging personal spectacle married to some brilliant death-defying high-speed competition.

Ask yourself how many sponsors Rossi lost during his very public shit-fights with Gibernau and Biaggi. What about Schwantz and Rainey?

Wasn’t Wayne Maxwell the bloke who was filling in Hector Faubel during the 2010 Moto2 race at the Island?

How great was that? Best thing he ever did in terms of self-promotion. Suddenly, the faceless superfast racer is a real, emotion-filled human being.

And that is precisely what Australian motorcycle racing needs. And right fucking now. 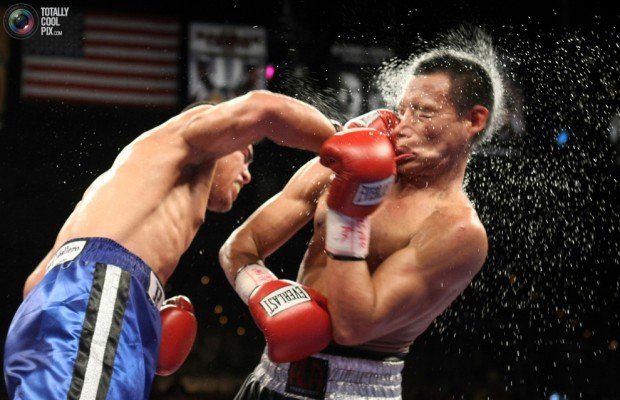 This wouldn’t happen if he had had a helmet on.

You racers want crowds? Then give the crowds something to care about. Give the crowds your humanity. You’re already risking your lives to race to empty stadiums and indifferent promoters.

What the hell have you got to lose?