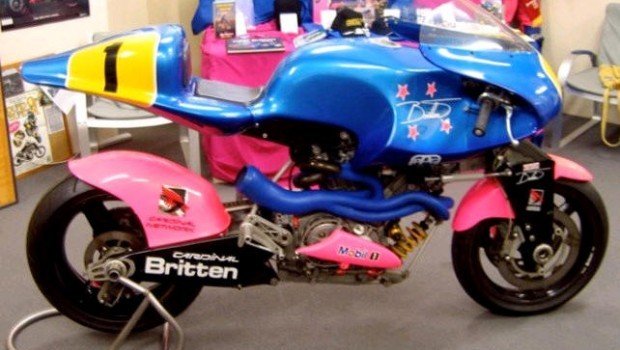 Easter Races at Mount Panorama meant production cars (James Hardie 12 Hour race) and a spotty local boy is watching the races on that Saturday. In between the different car races a different bellowing note caught my attention and a blue and pink rocket screamed under the Dunlop Overpass and into Murrays Corner. The blur then boomed the full length of pit straight on its back wheel before diving through Hell Corner and then again leaping on to its back wheel and pummelling up Mountain Strait until it disappeared over the crest. I remember the faint booms as it traversed the Mountain and made another pass or two. It was like an awakening urge that I had felt at the start of puberty. Not sure what it was, or what to do with it, but man, I liked it.

I saw this strange motorbike in the pits later and grabbed a poster that went with all the other posters I grabbed from all the car teams. After taking all those posters home and poring over its detail of this very strange motorbike about which I knew nothing it was supposed to go on the wall with the dozens of pictures. Sadly the poster disappeared during one of Mum’s cleaning pogroms, and the memory was all I had. Although my best mate had stuck his to the ceiling of his room.

Arriving in Christchurch, New Zealand late one recent evening, I found myself questioned by the immigration officer. Translations provided for those unfamiliar with the Australian and Kiwi dialects.

To which I replied in fluent Strine (Australian): “Yiiiir, heah ta hav arr look et Jahn Brittenz boikes” (Yeah, here to have a look at John Britten’s bikes).

The immigration bloke muttered. “Arrr? John Britten, clever bloke he was” and sent us on our way. We were in New Zealand as a treat for a visiting American friend, but on the top of my list was to visit the Britten museum. 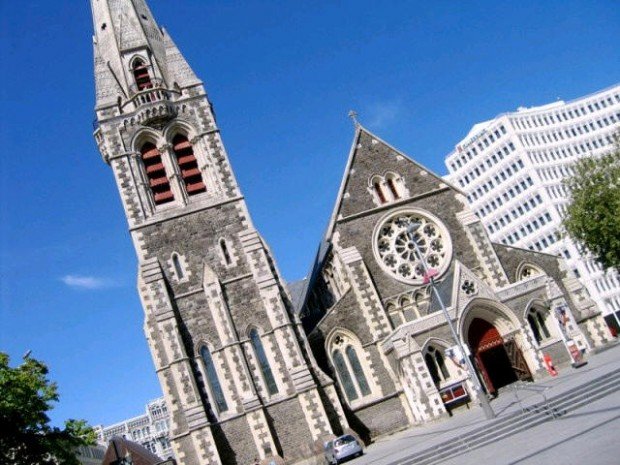 The centre of Christchurch is Cathederal Square. A lively, fun public space where all and sundry meet. 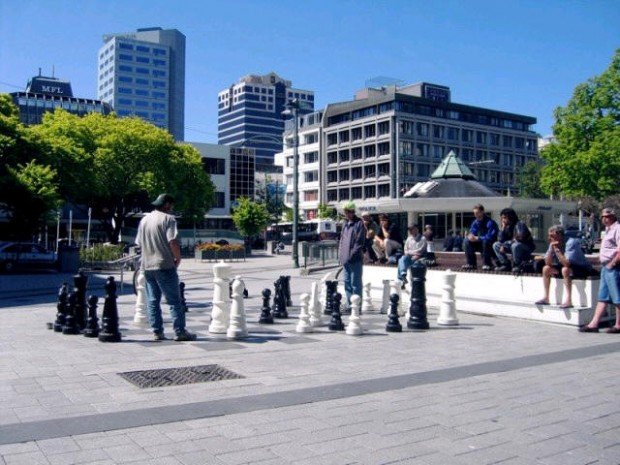 Now we all all know Kiwis like their contact sports, and I wanted to wait around to find out why this bloke needed to wear a helmet to play chess.

But I had other matters to attend to.

Behind that big cathedral was the end of my journey. 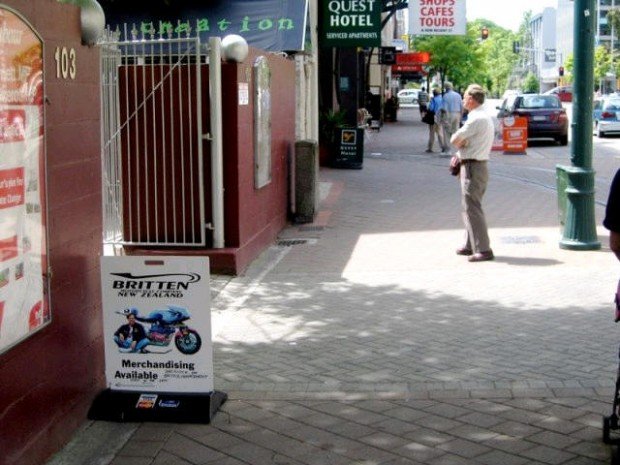 This modest entrance led to the offices of Brittco Management, John Britten’s property development company. Upon enquiring with the lovely lady at the front desk as to where I could see the Britten display she cheerfully led me up the corridor to the room.

I entered the room and a deep rush of elation that I wasn’t ready for. For before my eyes, in the middle of the room, was the Cardinal Network Bike, also known as Number One. The ten surviving bikes are all commonly known by their build number or the Race Team than ran them. 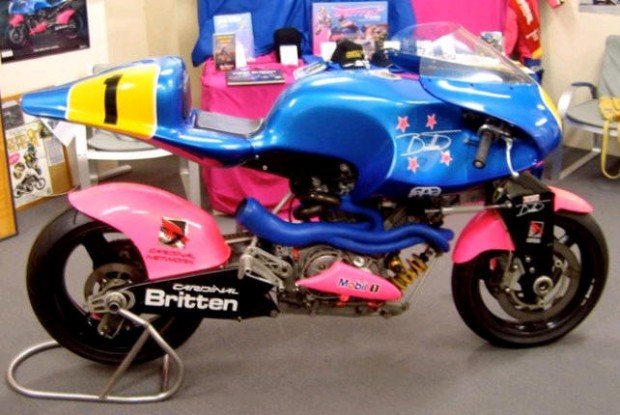 Also here was the first V-1000, the first bike they took to Daytona. 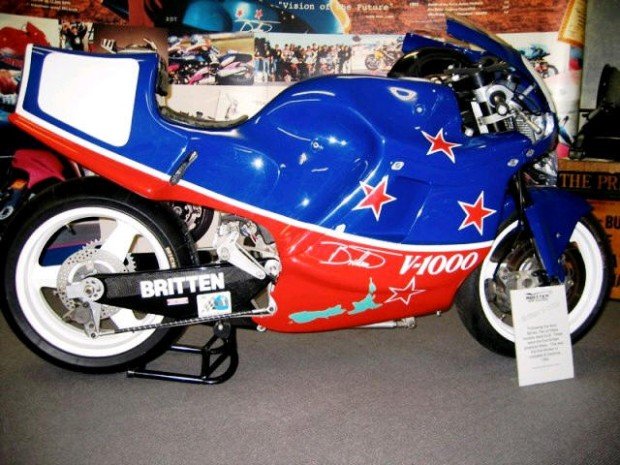 With the tingle easing, I slowly circled this mythical beast. We’ve all done it. Pored over a motorcycle, admiring detail and workmanship. Soon enough I was down on hand and knee peering up into its innards. The suspension layout, and the Hossack type front end. How on Earth did such a small team come up with such a magnificent feat of engineering? 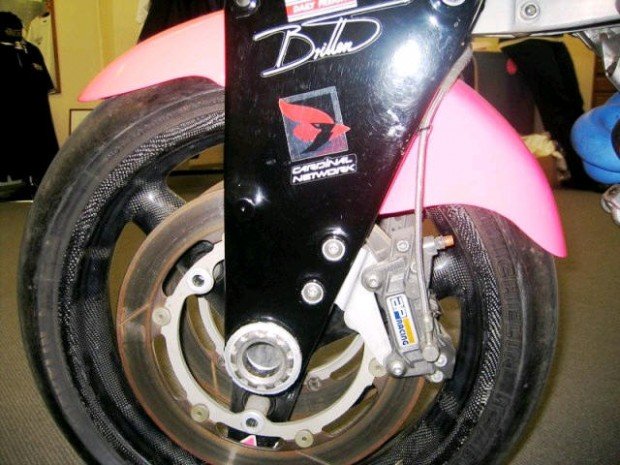 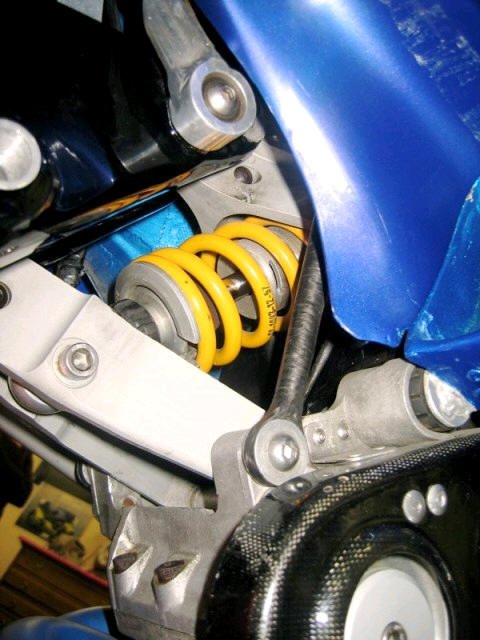 Looking up to the front suspension wishbones and shock 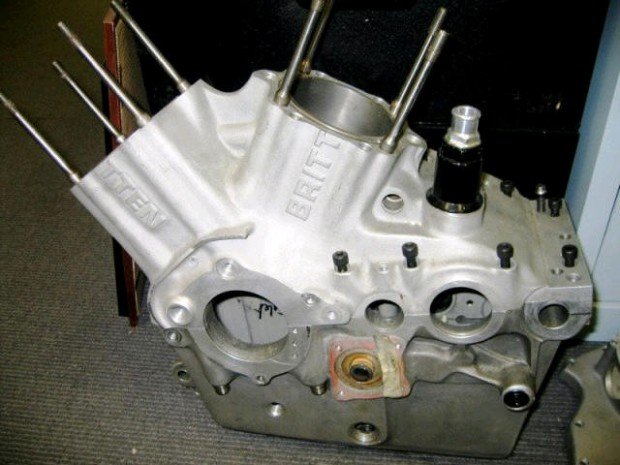 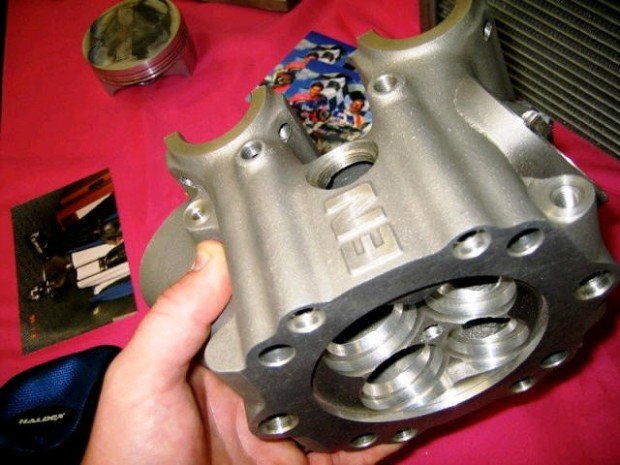 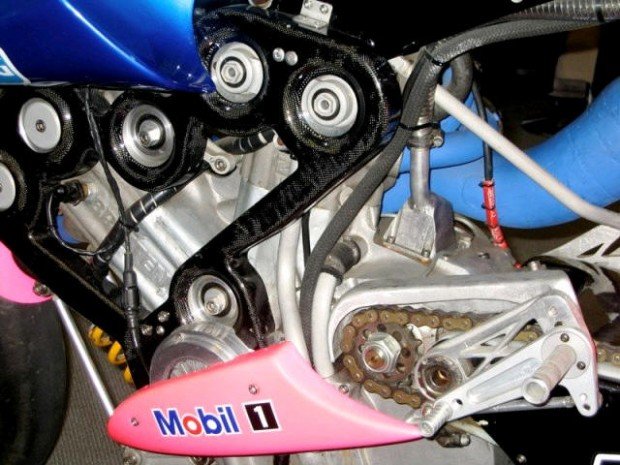 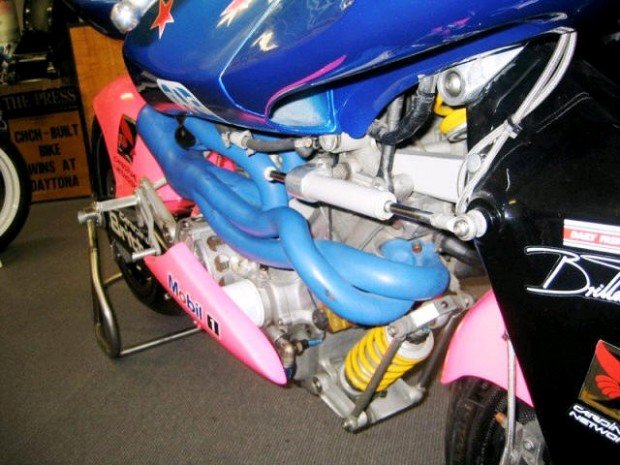 Rear shock is IN FRONT of the engine, centralising mass. Linkage runs underneath the crankcase to the swingarm.

Then I asked if I was allowed to sit on it. Stepping up onto the peg and throwing a leg over, I settled into the tiny seat. Like all race bikes, it was built for racers the likes of Dani Pedrosa, not 6 foot tall beer and pie fed boofheads like myself. I look like ate Dani Pedrosa with an egg and chips for breakfast! 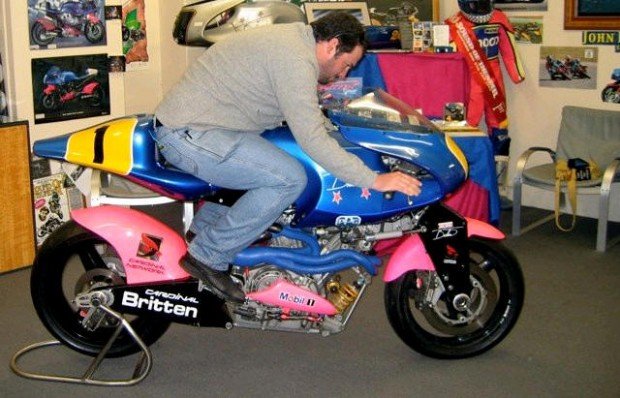 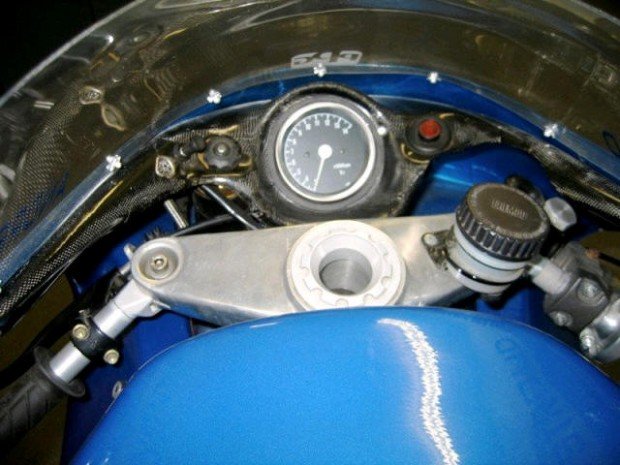 The view of the cockpit. Note the lack of fork legs… 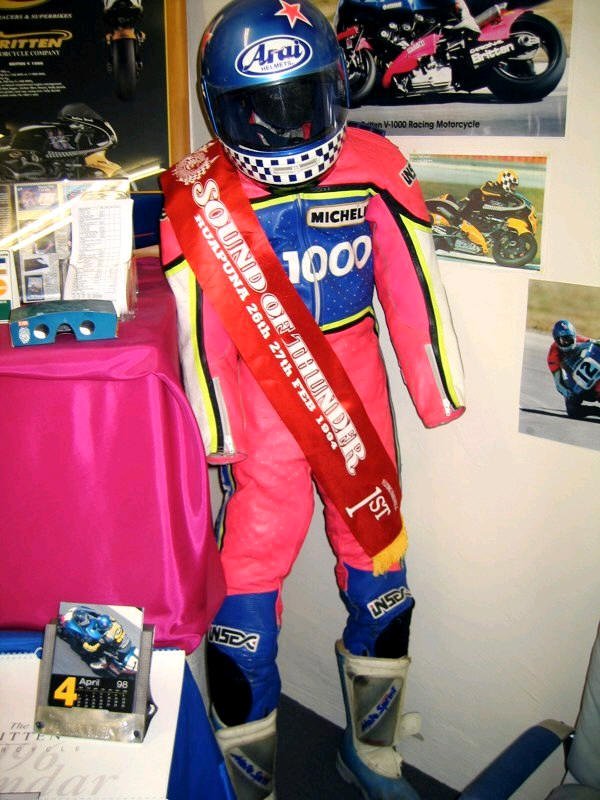 The room itself is a humble tribute to the amazing story of John Britten, his team and the bikes he built and raced. The promotional material is interspersed with many personal photos taken of the the team after hours and in the workshops which are a great window into the journey these people.

The secretary remained in the room and patiently answered my many questions about the bike and the race team, with a knowledge that would more than impress the most avid bike nut.

While the Britten V-1000s were the main thrust of the operation, other little projects sprouted on the side lines. Here is a 600cc single cylinder fuel injected motor they were experimenting with. 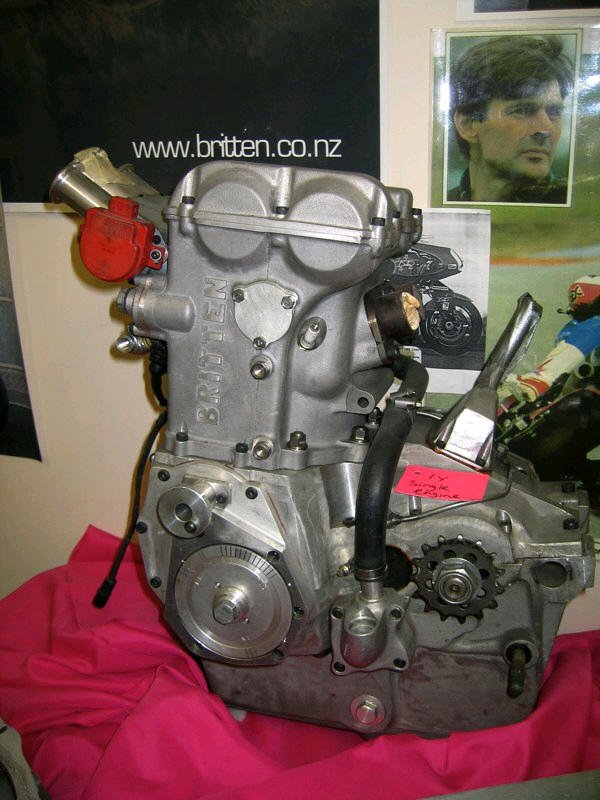 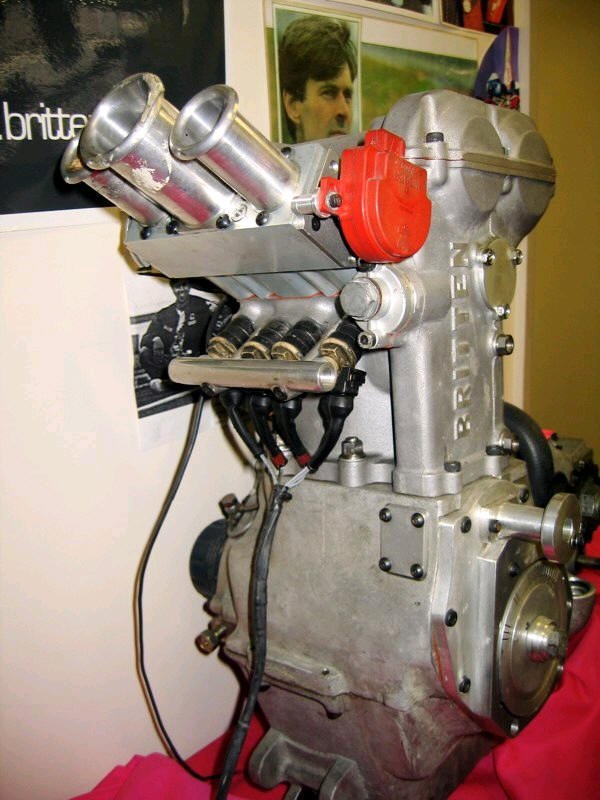 Three induction trumpets, four fuel injectors. Oh and wait, the air goes in the front and then out the back!!! 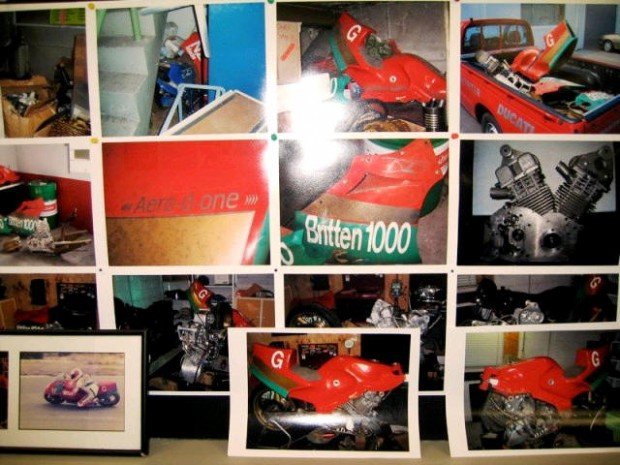 Currently the Aero D One Bike has been rescued from being forlorn and stuffed under a stair case and is undergoing a full and detailed restoration.

The secretary told me stories of the visitors to the museum. I was surprised to learn of the number who pass through their doors, all with a tale to tell of how they come to know the Britten. Many Americans who saw the bikes race in the US. Others had seen them race at the Isle of Man. Some are just fans. School groups frequent the display and learn what a Kiwi can do.

And what of the state of the Britten Motorcycle Company today? The lovely secretary described it, most eloquently, as ‘dormant’. The moulds for the body work and the engine tooling were only designed for a limited production run. This would have to be reproduced at great expense plus the fact that nearly 15 years of motorcycle design and development has passed since the Brittens were built. She did mention that there have been various discussions and meetings over the years as to a feature film (a la Worlds Fastest Indian), but little has eventuated so far. They still receive plenty of orders for T-shirts, posters, and other merchandise which keeps things ticking over, but my guess is that the Brittens are now, rightly so, a part of modern motorcycling folklore.

The personal photos taken behind the scenes of the team and people involved lend a real personal feel to the display. This was more than a machine of metal and Composites. This was an an engineering adventure.

So if you ever find yourself in Christchurch, do pop in. Its well worth a look.