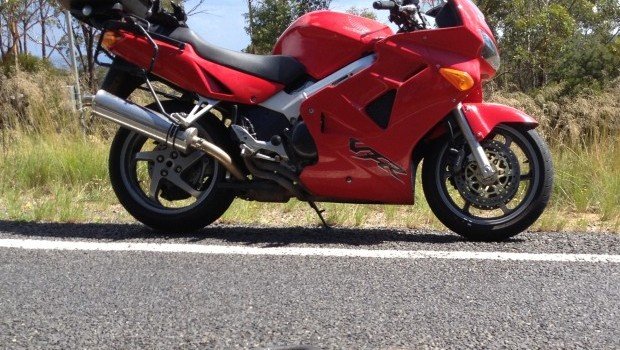 I rode from Sydney to Lithgow this afternoon. I took my VFR800, because I haven’t ridden it in a while and I didn’t want the battery to go flat.

It’s very high and light compared to the K1200RS. You feel like you’re sitting ON it rather than IN it. The K1200RS has a very low seat height, made possible by that brick motor.

It took me a while to stop tooting the horn when I wanted to turn left, because my K1200RS is of that vintage when BMW were hiring progressive thinkers fired by the UN or something, and they used buttons for the indicators, putting them where other manufacturers put the horn button.

The signs on the M7 said that the bridges were closed at Richmond and Windsor, but I’d seen them open on TV. So I kept going. The river was high at Richmond – maybe a metre below the bridge road surface. It didn’t look like it had covered the road overnight. There were people all over it taking photos.

The Bells Line of Road was damp in spots but OK. I stopped for petrol at the BP past Berambing. The fuel cap wouldn’t open. I opened my seat and got out the tool kit. It took ages, because I’d forgotten what you have to do to get the seat off a VFR800 after you’re put the key in the seat lock. There’s a secret lever behind the helmet hook. The tools were a bit corroded, like they’ve never been used. Bloody Hondas.

I used the screwdriver to lever the fuel cap open. Then I put the nozzle in, and ten litres later it stopped pumping. I closed the cap, put the key in my pocket and went into the office and told the girl there. She said she guessed they might have run out.

She came out and put a padlock on my bowser. She told me the pump a few metres behind me would give me premium, so I pushed the bike backwards a few metres. The filler cap wouldn’t open. I tried using a key from my keyring, because I was in a bad mood by now. It didn’t work. I forced it using the bike key in the lock, because I wanted the bike key to break so I could start kicking things and using some new Serbian curses Boris taught me. It worked in that the key didn’t break and the cap opened.

Leaving Lithgow to come back I did the horn thing again. Bloody BMWs. The climb up past the POW memorial on Chifley Road looked dry, so I passed a few cars on the inside and revelled in the sound of the V4 on the pipe and under load.

A few kilometres after Bell a highway patrol car signalled me to pull over. I pulled over and took my helmet off.

Apparently VFR800 riders are notorious winebibbers and scofflaws. I was asked how much alcohol I had drunk today. I told them none. I was asked to address a machine which one of the police held near my mouth. I was asked for my licence.

The one who handed me back my licence asked if I had had any trouble on the road today.

“What sort of trouble?” I asked.

“Any sort,” he said enigmatically.

I put my helmet on and started my bike, wondering what that was all about. I decided it was his idea of small talk. He should stick to the weather. There’s been plenty of it lately.

My VFR800 came with a Garmen Zumo GPS. It started nagging me to fill my tank around Richmond, when I still had about 250km of range left. I remembered in the settings somewhere you could turn that off. I decided I would do that so I didn’t have to reset my GPS every time I filled up.

I turned on to the M7 again and tried to find the setting. I went through all the menus twice but couldn’t find it.

I got home and told my daughter I’d been pulled over by the Highway Patrol.

I told her I didn’t get arrested or tazed.

It’s what passes for conversation in the Internet age.