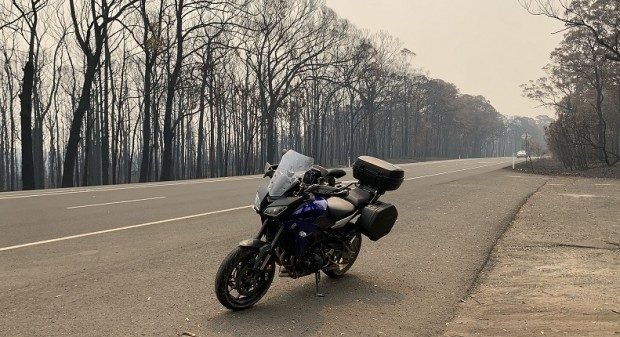 I rode out to Cowra the Friday after Christmas to join Woodduck’s Woodstock TT. The bushfires had taken a heavy toll on the Bells Line of Road. The road was open, but the authorities had reduced the speed limit to 60 km/h for its length.

I’d reached Lithgow and was heading west on the main street when six bikes crested the hill in front of me. They all had the same profile. “What sort of cockwombles”, I asked myself, “all buy the same bike?”

They passed. They were all highway patrol FJ1300s.

It was double demerits time until January 2. I took back roads: Tarana, Georges Plains, Barry, Neville. The Neville pub was closed, but I recognized the Fireblade outside it. It was The False Boris. I told him it wasn’t that far to Woodstock and I would go to my motel at Cowra, book in and then ride to Woodstock and drink beer with him.

I did. WoodDuck and Cipher and Mark arrived. I had dinner and more beer and went back to my motel. I got back to Woodstock at 0800 the next day, and half an hour later we were on the glorious Reg Hailstone Way. The five of us spent the day chasing each other along winding roads with occasional beer stops. There were no bushfires down there, but the air was smoky and the drought was hitting hard. What little grass grew was brown.

I left the lads at Trunkey Creek and headed up past Sallys Flat to Ben’s place. I drank beer and ate with him. We went over the road to the sheep farm and shot kangaroos. They were all in bad condition. Their ribs and hip bones were showing. Times are hard when kangaroos are doing it tough.

I headed back on Sunday. The temperature was around 42. I took back roads. I stopped at Tarana for beer. There were two highway patrol bikes coming from Lithgow when I left. I’ve never seen highway patrol on that road before.

There were four highway patrol bikes in the McDonalds car park at Lithgow. I rode most of the Bells Line of Road on cruise control in a state of paranoia.

It was hotter the next Saturday when I decided to ride up to Singleton to visit Boris. The Putty Road was closed and I didn’t want to ride the motorway, so I went up there via Wollombi and Broke. The bushfire damage wasn’t too bad. It was 46 degrees most of the way according to the gauge on the Yamaha. I stopped at Broke and drank 600ml of water.

The sign south of Singleton said the Putty Road was open. I rode it south for about 20 km and bought fuel at Bulga. A helicopter passed over trailing a water hopper. It was 48 degrees.

I kept going south. Five kilometres further there was a tree down over the road. There was no way to pass. There was a Rural Fire Service truck parked on the other side with lights on. I did a U-turn. I passed two RFS trucks on their way to chainsaw the tree.

I cut across to Broke at Milbrodale. It was 46 degrees all the way to the freeway. It got a bit cooler around 1800. I started feeling sick after a while, and I pulled in to the rest area just before the Hawkesbury River. There was a highway patrol car giving breath tests to everyone, but he was busy when I passed. I stopped about fifty metres on.

The temperature was down to 41. I took my helmet and jacket off. I swallowed a few mouthfuls of warm water. I still felt sick, and now I was dizzy too. I sat in the gutter.

The sun was low and there was no shade. I walked up to the toilets and used one. The water tap outside delivered cold water. I washed my hands, and drank a few mouthfuls, and splashed my face and hair.

There was a picnic table between me and the bike. I sat at it for a while. After about five minutes I felt really bad, and vomited discreetly on the ground. The highway patrol didn’t notice. It was just water – I hadn’t eaten since breakfast. Ten minutes later, it had dried up.

I felt a bit better. I had a bit more water. I put on my helmet and jacket and rode home. It took about an hour.

The girl-child was watching TV. “Hi Dad”, she said. I told her what happened and said I thought I had heatstroke.

She sprang into action. She got some ice in a cloth and applied it to my head. She got a big glass of cold water and told me to sip it slowly, and said I should have a cool shower when I stopped feeling dizzy.

“You’re very good at this”, I told her gratefully.

“I know”, she said. “We had a dog in with heatstroke a couple of weeks ago.”

She’s working as a veterinary nurse these days.

“I bet he recovered really well, with you looking after him”, I said.