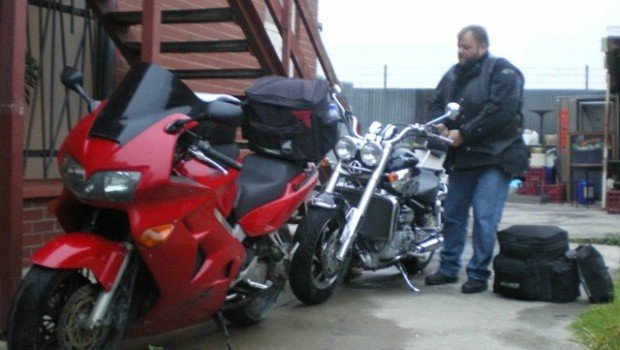 TRAVELS WITH THE DOOR II 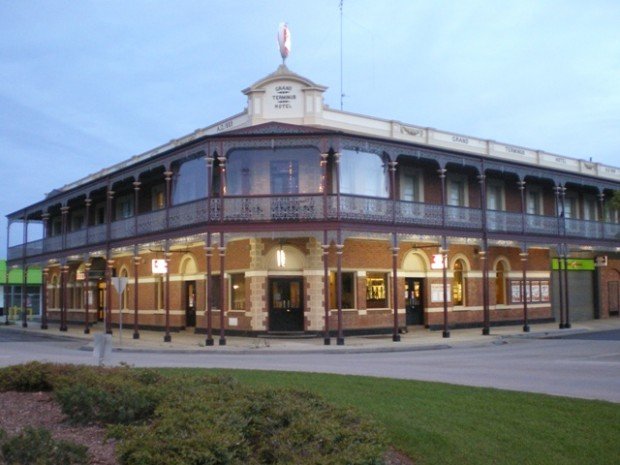 The Grand Terminus is a grand old country pub where you can get a room for $55 a night. The Door and I are greeted in the car park by Roger, an avuncular septuagenarian on a BMW K1200. He insists on buying us a beer.

We stow our bags and have a beer with Roger. We have a shower and change, and come down and have more beer with Roger. Roger is retired, but his hobby is buying repairable write-offs from insurance companies, fixing them up and selling them. Roger makes good money doing this, and has so many bikes in his shed up in northern NSW that he is seeing a real estate agent tomorrow about buying a new house in the Bairnsdale area. One with a bigger shed. Then he’s riding to Tasmania for the BMW rally.

Roger knows lots about bikes, especially BMWs. The Door is interested in a GS. Roger talks him out of it. “For what you want, you’d be better off with a DR650”, he says.

We decide to go to dinner at the Lake of China.

Eating with men is good. Efficient. Within three minutes of sitting down we have ordered three meals and a bottle of red to share. Roger tells old army stories and explains why The Door needs a DR650. He and The Door exchange business cards. We eat well, and then go back to the pub and drink beer and bourbon. 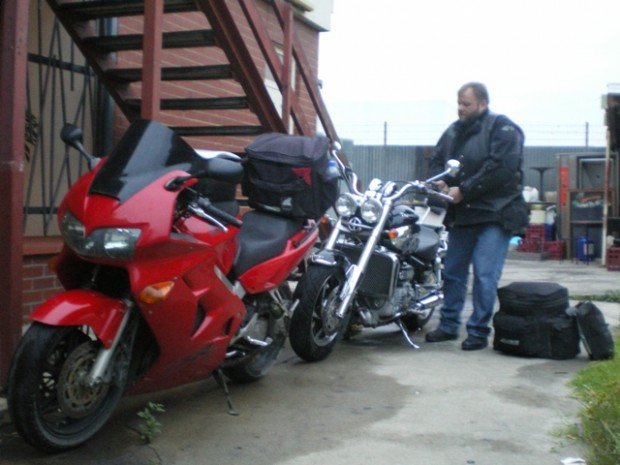 The Door loads his Rocket at the Grand Terminus

We roll out at 0700. The Door pops a celebratory wheelie.

We turn off the highway and blast along scenic country roads, pausing to trickle through pretty country towns. We have breakfast and gas up at Traralgon. The Door approves. “At first I thought ‘Where the fuck is he taking me?’, but after a while I really started to enjoy those roads, and I didn’t care.”

I have cocked up. I meant to stop at Moe, further along, but I missed a turn. We get out on the A1 motorway. I cock up again and miss a turn. We go maybe 100km too far west. We eventually work it out and turn south through Pakenham and back east.

We finally arrive at Phillip Island. Just before the track we are pulled over by the police. There are a lot of them, all Highway Patrol with their bikes parked nearby. They are pulling over every motorcycle. They are not pulling over any cars.

“This is a licence check”, says my one. “Licence please.”

I give him my licence. He spends a minute or two writing my details down on a clipboard, then returns it. He gives me a pamphlet as well. “You can go.”

“Why are you recording licence details?” I ask.

“Because”, he replies, “I am a member of the Victorian police force and you are obliged to comply with my reasonable requests. And to give you a pamphlet on motorcycle safety. Alrighty?”

I am not sure I follow his logic, but I decide not to pursue it further.

Ten minutes later we are pulling up at Turn 12. There is a sea of BIKE ME! t-shirts. 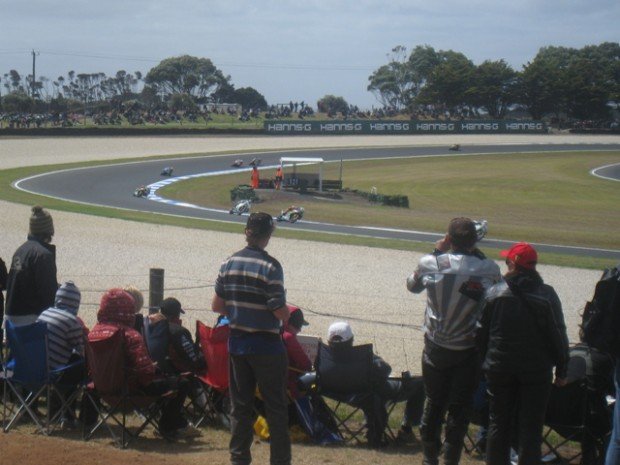 WSBK Phillip Island: the scream of the engines, the bang of the power shifters, and if you don’t like the weather, just wait an hour

One of the first people I see is Island Mick. I shake his hand and tell him about the police. “What did the pamphlet say?” he asks.

I get the pamphlet. “Apparently you’re not allowed to distribute these without seeing a motorcycle rider’s licence”, I tell him. “Got your licence on you?”

Mick shows me his licence. I check the date, and give it back with the pamphlet.

I socialize, and take photos. I go for a beer, and am pleased that the choice is no longer Victoria Bitter or Victoria Bitter. They have Boags. I buy one for me and one for J.D. 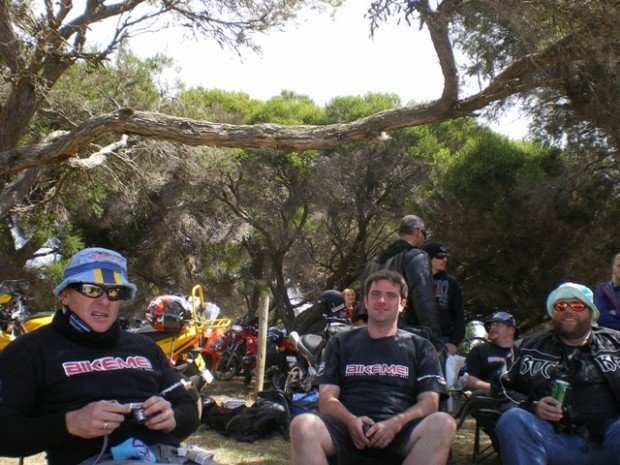 Semi-final of the Gay Hats event. Competition was fierce.

Unusually for a post-teenager, J.D. can text and eat simultaneously 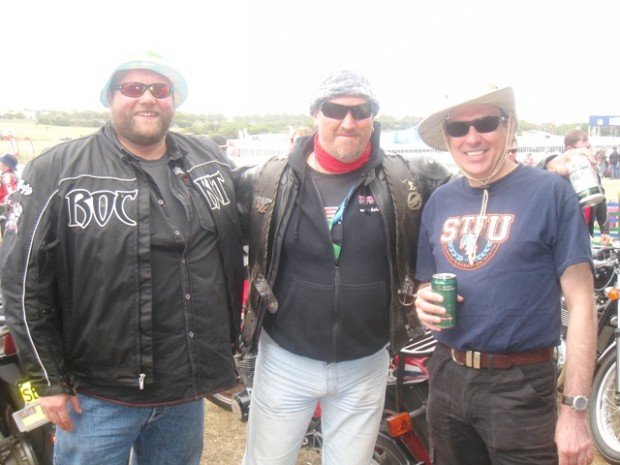 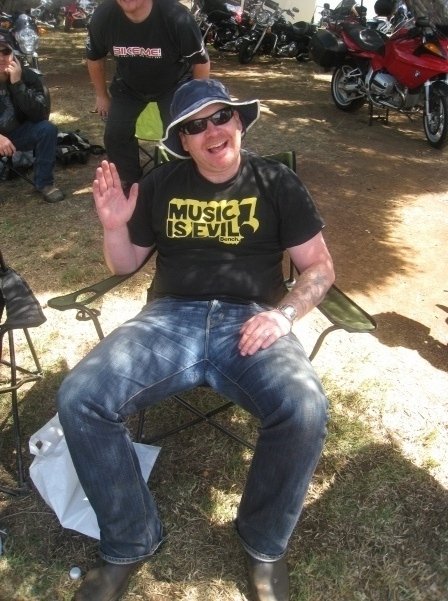 Biffa: on the side of the righteous

The Door and I are both a bit over dirt roads. I get Sandy to check my planned route to Mansfield. She pronounces it dirt free. “Good ride”, she says “This bit here is the Black Spur.”

The Black Spur is legendary among Victorian motorcyclists, and I just lucked on it. I’ve never ridden it before. I mention it to Boris. “It’s fabulous”, he declares. “It’s even worth doing slowly just for the scenery.”

Biffa is here, and suffering from a hangover. He has drunk forty bourbons and then gone to sleep and snored like forty bastards, so his throat is sore too. He smiles as long as people don’t talk too much or come too close. He twitches slightly when the superbikes come out of turn 12 on the pipe.

Scrambles has come down by car as a passenger, as his motorcycle rider’s licence was confiscated by the Organs of the State forty six seconds after he took delivery of his Speed Triple and carried out a brief performance test in front of a Highway Patrol car. He has three weeks of confiscation to go. He says he will load up his bike and ride to Queensland the day he gets it back. 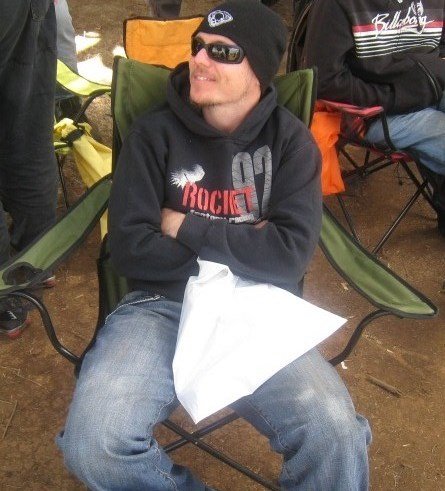 Bluesy is here: he has ridden down with some mates and pitched tents in which to sleep. He says the food at the track is crap and the beer is expensive, and he has been doing shuttle runs on his FZR bringing back steaks for the barbecue and beer to drink while cooking.

Crew is here. He has ridden down a few days earlier and has been exploring Victorian roads and drinking booze with the locals. I point out The Door. I tell him how refreshing it is to ride down with someone who doesn’t fall off his motorcycle on the Bonang road. Crew responds with a cruel and crude epithet.

The racing is exciting. In the first race there is less than 0.8 seconds between the first three places, and Leon Haslam wins by 0.004 seconds. In the second there is less than 0.9 seconds between first and fourth place. Leon Haslam looks ready to take it as well, but Carlos Checa passes him at the last minute and manages to get 0.3 seconds in front of him at the finish.

The last race ends. The Door and I join the exodus. Signs say blue lanes are in operation, and we ride out with thousands of other motorcycles, four abreast at times.

The Door pops a celebratory wheelie.

We head for Pakenham again and points north.