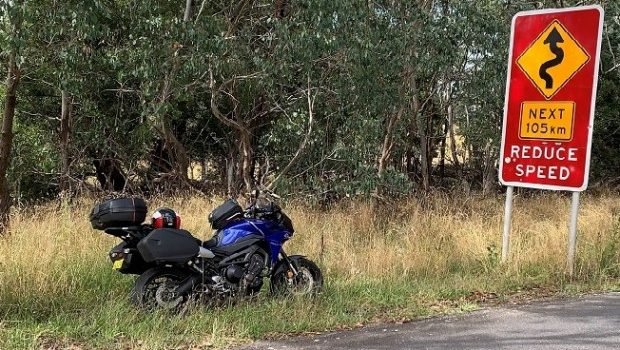 I stopped just after the Victorian border and parked my bike in front of the sign on the Bonang Road that says “105km Winding Road” for a photo. It is the tradition of my people. It is what binds us together.

It was getting cold. I put my winter gloves on.

It was day two of my Snowy Mountains ride. It started on Monday at the bike shop getting a new set of tyres on the Tracer. I scrubbed them in up Macquarie Pass and through Kangaroo Valley, and then turned west at Nowra to ride the Nerriga Road. There were a few spots of rain. Then I got to Braidwood, and it rained solidly all the way down the Kings Highway to the coast at Batemans Bay. Also, there was lots of traffic, including a truck going down the hill in low gear. I got very wet.

The rain stopped. I continued south. I was dry by 16:00, so I stopped in at the Dromedary Hotel at Central Tilba to blow the froth off a couple with The False Boris and his merry men. That night I stayed at Bega.

Tuesday I headed for Candelo and Mount Darragh. I’d never ridden the Mount Darragh road before, and it was spectacular. I stopped at Bombala for fuel, and got the waterproof lining for my jacket out of the pannier and installed it. Then I stopped for the photo op and glove change as noted above.

I’ve ridden the Bonang Road several times. It was as good as I remembered. After a stop for fuel at Nowa Nowa, I rode the Great Alpine Road to Omeo and then the Mount Hotham road to Bright. Both were spectacular. I’d never been through Mount Hotham before.

I booked in to my motel at Bright, and then discovered that the keys to everything except my motorcycle ignition weren’t in my jacket pocket where I always keep them.

Maybe they fell out when I was zipping the lining into the jacket at Bombala. I called the service station. They checked their forecourt and said there were no keys on the ground.

Maybe they fell out when I refueled at Nowa Nowa. I called the general store. They checked their forecourt and said there were no keys on the ground.

I called the Bombala police station to see if anyone had found them and handed them in. They hadn’t.

I contemplated another three days without changing underwear or brushing teeth.

I had spare luggage keys at home. I checked Maps. It was a six and a half hour ride home. I would have to wait for someone to get home from work and let me in, which would make getting the keys and coming back a two day exercise. I called family and said I might be coming back tomorrow night.

I rode up to the pub to think, and have some dinner and beer. It was there that I remembered that I’d opened the top case to change my gloves on the side of the Bonang Road. Maybe I’d lost them there?

I got an early night after drinking the Irish whiskey in my hip flask. I got up at 04:00. I had a shower. I checked the weather. BOM said it would be cold. The thermal lining for my jacket was in the big bum pocket, so I installed it. I drank a few cups of motel room instant coffee. I left at 05:30, about 90 minutes before sunrise.

The plan: ride the 480 km to the sign. Check if the keys were on the ground. If not, assume I’d left them in the top case and they’d vibrated out, and ride down the Bonang road looking for them. When the GPS said ETA home was 20:00, abort and go home.

The headlight on the Tracer is surprisingly good. I never knew. I’ve only had it two and a half years. I was scared of hitting wildlife, but I didn’t see any until the sun was up and I was approaching my 200km Corryong fuel stop. A wallaby hopped along the right hand side of the road heading east like me, I braked hard, and it jinked left, because of course it would, it’s a wallaby. I missed it and continued.

Some way past Khancoban a pair of wallabies ran across in front of me and I braked hard and looked for the rest of their mob, but didn’t see any. It got colder – down to 8 degrees.

I pulled in to Bombala, 240km out from Corryong, around 11:00. I refueled, and half an hour later I was back in Victoria in front of the 105km Winding Road sign.

My keys weren’t there.

I took a deep breath. I put my helmet on and headed south on the Bonang. It was the slowest I’ve ever ridden on that road. A few hundred metres on, just before the Delegate River Road turnoff, my keys were on the road.

I did a U-turn and stopped. A couple of guys on sports bikes pulled up to see if I needed help. I waved them on.

I picked up my keys. They’d been run over at least once. The garage and mailbox key were bent pretty badly, and the clips I use for clipping my ignition key back on the ring when I park were broken, but my luggage keys were straight. I opened the top case. I drank deep from the water bottle in there.

I rode back to Bombala to re-plan my trip. I felt like sweet American whiskey for lunch. The Imperial was closed. The Globe was closed too. The Bombala Club was open. I signed in and ordered a double Wild Turkey on ice.

I called family and said I wouldn’t be back that night. My original Wednesday plan had been to leave Bright and ride Granya Gap before heading to Jindabyne. I dropped Granya Gap from the plan and booked a motel in Jindabyne. I got a killer deal on line: less than eighty bucks.

I was in my room with my bags by 16:00. I was hungry. The motel was out of town. Apple Maps said there was a brewery two minutes walk away that sold food. I walked for two minutes. I ordered a half litre of Golden Ale. It was most satisfactory. I ordered a lamb skewer. It was very tasty, but over-salted. “I see what you’ve done there”, I thought, and ordered another half litre of Golden Ale. 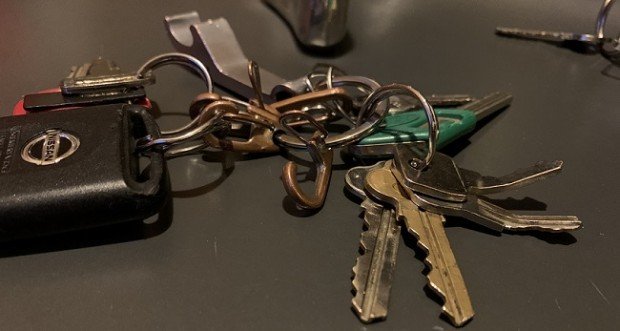 I’d never ridden Brown Mountain before. It was great. There was a shower or two as I approached Batemans Bay, and I turned west up the Kings Highway to find that it was wet pretty much all the way. Again.

The motel I’d booked in Goulburn was dodgy. I asked if I could have a ground floor room, and the guy said I had to cancel the on-line booking first, which I did on my phone. Then I offered him my credit card and he said they only take cash. He upped the price. He didn’t give me a receipt.

There was a gate at the back of the car park that let you in to a public car park, and the other side of the public car park was the rear entrance to the Hibernian Hotel. I went in there at 17:30 and ordered a beer and a steak. I was told later by a local that the Hibernian sold the best steaks in Goulburn. Mine was good meat and perfectly cooked. I had another beer.

I had a leisurely breakfast on Friday and headed out to Crookwell after 09:00. From Crookwell to Trunkey Creek is some superb swervery. I cut east below Bathurst to O’Connell, and arrived at the Tarana Hotel at 11:50 for morning beers. It was shut.

I proceeded east. I’d been riding much of the last two and a half thousand kilometres on lonely mountain roads with drop-offs that meant if you went over you might not be found for months. My pace had been measured. It was on the Bellbird Hill descent into Kurrajong that I touched a footpeg feeler on the ground for the first time on the trip. The right hand one. It’s always that one. I blame road camber.

I waved my wallet over the reader for the car park door mid afternoon. I stopped outside my garage. My neighbor Neil was in his garage, removing the rear fender from his Softail CVO. I hadn’t seen him in weeks. “Hi Al”, he said. “Where have you been?”

“Just back from a five day trip in the Snowies”, I told him.

“Just got out of hospital”, he said. “Went trail riding, ended up with six broken ribs and a punctured lung.”

“Come to think of it”, I said, “my trip was pretty good really.”