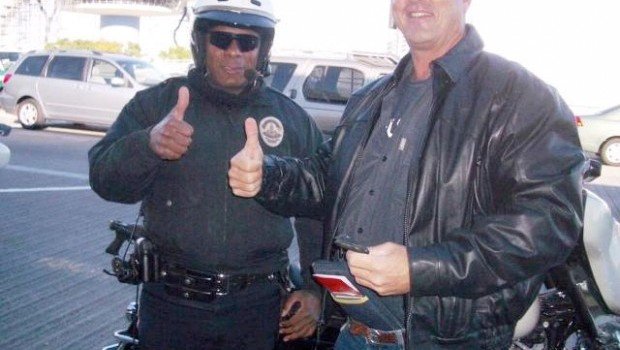 So, you have decided to take a motorcycle tour of North America?

Here are a few suggestions and tips that may come in handy.

This is not going to be a guide to Disneyland, Hollywood, Las Vegas or New York. No, it’s about touring the scenic back roads of America on a motorcycle.

Oh, alright, there’s going to be a bit on Disneyland and Hollywood and Las Vegas, nothing on New York though, which is no fit place for the motorcycle enthusiast.

Visas and Passports, the War on Terror and Naughty Things in your Past 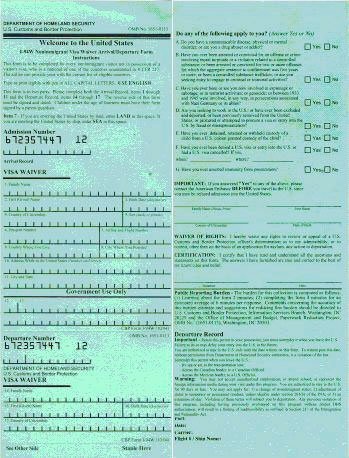 OK. Before you go, there are a couple of things you need:

You are going to need a passport. Make sure it has a minimum of one year left on it before it expires.

You might consider obtaining a new passport if your old one has, say, North Korea or Iranian visa stamps in it. Just a thought.

It may come as a surprise to many but you do not need to apply at an Embassy for a Visa to the U.S, you merely have to fill out a couple of little cards on board your flight detailing your name, birth date, passport number, where you intend to stay (just put down a hotel, get the full address first, one in L.A will be fine) and any transgressions you may have committed against the State.

FFS, do not put down “journalist” as your vocation. “Company Director” will do nicely.

Some of the questions asked are risible. Moral Turpitude? Were you a Nazi between 1933 and 1945? Are you mental? A drug addict?

Hmmm, now question “B” (moral turpitude) may have a few readers worried. Just say no.

Trust me on this.

REMEMBER, YOU ARE ON A HOLIDAY. (You need a business Visa otherwise.)

Really, unless you are on a watch list, any minor (and a lot of major) transgressions in your past will not show up on any database the US Government has access to. The Commonwealth Spent Convictions Scheme, which was created on 30 June 1990 by Part VIIC of the Commonwealth Crimes Act (1914) prevents this from occurring.

When you arrive you will have to swipe two fingers on a fingerprint reader and have a digital pic taken. No biggie.

Next you are going to need an International Drivers Licence. Sure, it’s not strictly necessary as you can use your normal Australian state issued licence, but once again, trust me on this.

If you do happen to get pulled over you will more than likely encounter a LEO ( Law Enforcement Official) with minimal knowledge of international licences. 99.99% of the time they will scratch their heads and give you a warning. (More hints and tips LEO related in a further chapter. A cooperative attitude, a winning smile and a broad “G’day mate” go a long way towards your goal. Small trinkets in the form of a stuffed toy koala, tanned kangaroo scrotum or Aussie flag sticker work wonders here too).

Now equipped with your passport and licence, it’s time to decide on your carrier. Jet carrier that is. You will find really cheap off-brand airlines that advertise US tickets for as little as $1500-$1800. Be very careful. They generally go via Taipei, or Goatfuck Kazakhstan and take 38 hours to get from Australia’s east coast to either LA or San Francisco with additional weirdness in the form of ticketing arrangements and flight times.

Far better to pay the extra and get accosted by the trout faced bun tossers and sour faggots onboard Qantas unless you can score a business class upgrade where you will be treated with sickening sycophancy by the same hags and fags. 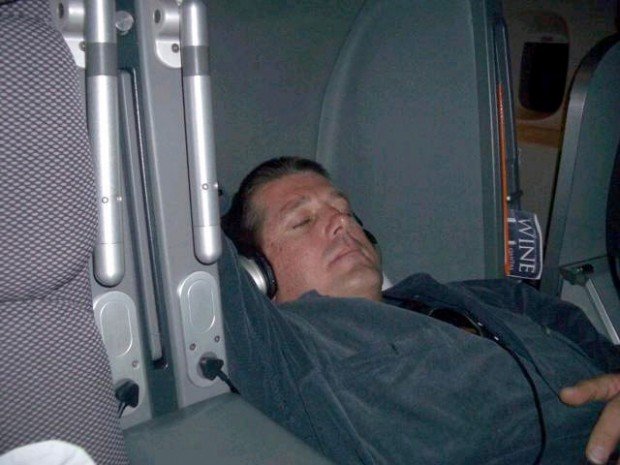 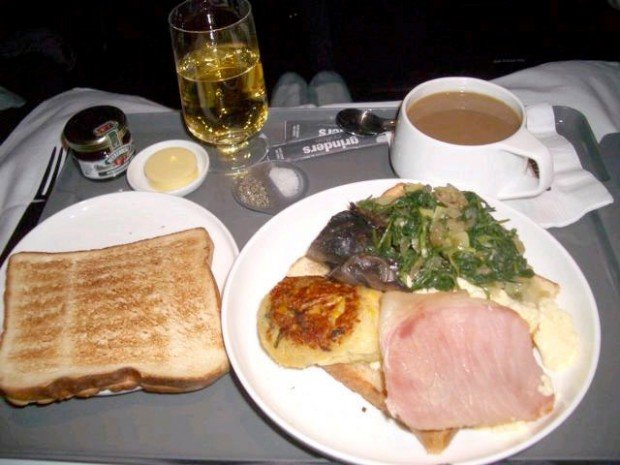 This too is Good

Hmmm. Then again, Branson’s Virgins should be flying by the end of the year.

Either way, if you are flying economy, you definitely want an EXIT ROW AISLE seat. Exit row so you get more leg room, and aisle so you can get up, stretch, piss, wander about a bit without having to climb over dumbfuck sitting next to you.

Do not have more than three alcoholic drinks on the entire flight, even if you are sitting next to Damien Devil Spawn.

See if you can score some Valiums, muscle relaxants etc for your flight over. Just roll ’em up into a scrap of paper (so it won’t show on X-Ray) and tuck it into your shirt pocket.

Oh, you will be wearing a shirt with a pocket, long sleeves if you have tattoos, long pants and a fresh haircut, you will also have removed all facial piercings and be wearing shoes, you slob. See below.

Now, I’m going to take it that most will be flying into Los Angeles, a pestilential hellhole with an even worse airport. It truly fucken sucks. Fucken. So here’s the go.

Elbow your way to the front of the scrum when you finally get let outta cattle class (it’s horrible what a couple of hundred of the great unwashed can do to the interior of a 747 on a long haul flight, it stinks too), and stride to the immigration gates. You definitely want to be up the front as there’s probably another couple of flights from Asia or the Middle East landed just in front of yours or just about due to land and these flights attract a bit more scrutiny and can hold you up.

At this point all you want to do is get through Immigration & Customs and get outside, so walk real fast, not so as to draw attention, but motor anyway. Study the lay out of the Airport before you arrive, it’s in the back of the Qantas mags on board.

Welcome to Jamaica. Have a nice day. Oops. Wrong joke.

This is where your cunning ploy of NOT GETTING PISSED on the flight pays off as does your choice of a neat and tidy appearance.

I recently chortled with schadenfreud at the sight of two unwashed hippies, one wearing a fucking Bob Marley T-Shirt with dope leaves rampant, the other sporting a Che Guevara T-Shirt, both dreadlocked, cargo shorted and bethonged, off their tits on something, I’m guessing spacecake, getting grilled then led away at the Immigration gate.

Don’t forget, the US Customs/Immigration guys are seriously well trained and motivated. They do not fuck around. If the individual officer does not like the look of you, stiff shit, you ain’t getting in. Play by their rules, be polite and humble, dress the part and you will have no worries.

The nail that sticks up gets hammered flat but that is not to say your inner freak has been stilled. Right, here’s a picture, this is how it’s supposed to go.

If you find yourself being led away to a rendition flight bound for sunny Guantanamo, you have failed. Epically.

O.K. You have gone through Immigration, now it’s time for customs. Just go through the “NOTHING TO DECLARE” line even if you have a carton of fags and a bottle of Bundaberg OP. Rum.

As an aside, Bundaberg OP. Rum is the only bottle of alcohol, (of which you are allowed one each) to even consider bringing into the US. Piss is cheaper in the States than it is at an Aussie duty free store.

Same goes with cigs, unless you smoke rollies, Champion Ruby etc, or Benson & Hedges, two brands which you cannot get in the U.S. It’s cheaper to buy ’em in the States.

You can bring in something like a kilogram or two of rollie tobacco or 250 cigs or bulk cigars. Look it up at the Duty Free store at the Aussie airport.

If you do smoke rollies, make sure you have brought heaps of packets of Tally-Ho’s, Ventis etc as they are stupidly expensive in most parts of the States; I’m talking up to $5.00 a packet of 36 papers.

Of course in bumphuck towns, some people still smoke rollies, and you can get tobacco and papers (try about $1.25 a kilogram!) but in most places papers are used for joints.

Once outside, you need to pay attention to where you are. Assuming you have landed in L.A., you are on the bottom road level. This is the arrival level. When you depart the US (if you depart from LAX) you will be on the next level up, directly above where you are when you arrive.

There are all sorts of scammers outside at U.S. Airports, complete with official looking name badges and shit. The Seppos call ’em “solicitors” so don’t be surprised when you hear announcements over the PA stating that you are not obligated to give money to “solicitors”. You will more than likely be approached by these dudes offering you help, directions etc. Be firm, don’t give ’em any dosh, they understand NO.

There’s heaps of cops at the airport any way, so don’t feel intimidated by them. The cops will give ’em a BLIP on their sirens and move ’em along.

The Cops at the airports are pretty cool too, especially if you ride.

Go talk to ’em if they don’t look busy, they are stoked to rap about bikes. 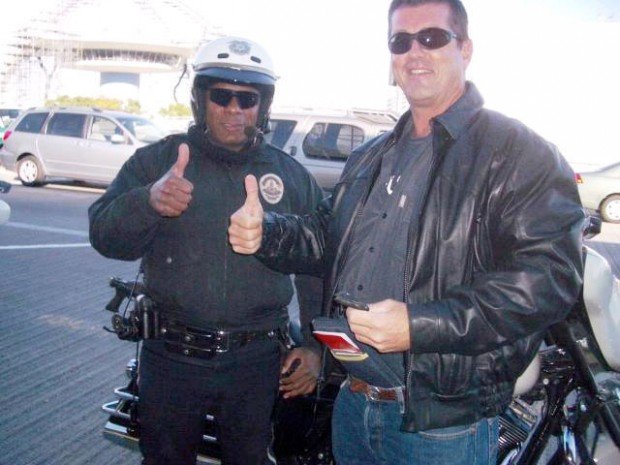 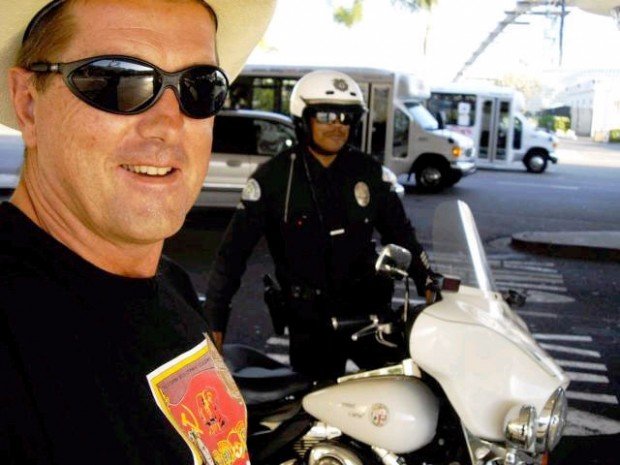 Now, to the crux of the matter: The Touring of North America by the Motorcycle Enthusiast.

There are many options open to the touring motorcycle enthusiast. Everything from the simple rental, to shipping one’s own machine over, to outright purchase of a suitable mount.

The main things to take into consideration are obviously budget and length of time intended to devote to the pleasures of motorcycling.

If you are only going to be in America for a week or ten days, frankly you are wasting your time reading this guide, just google “Harley Rentals” and be done with it.

Go on, away with you.

Now, for the committed tourer, one who can devote more than a week or ten fleeting days, read on to the next article.