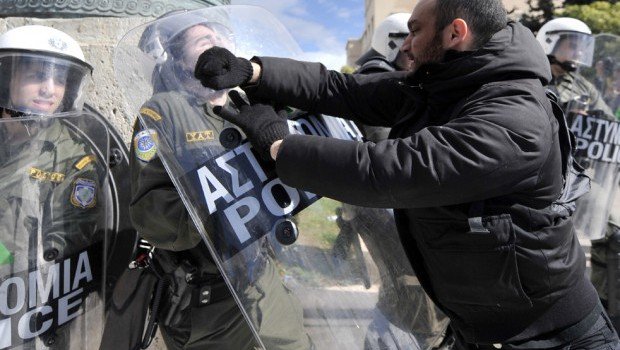 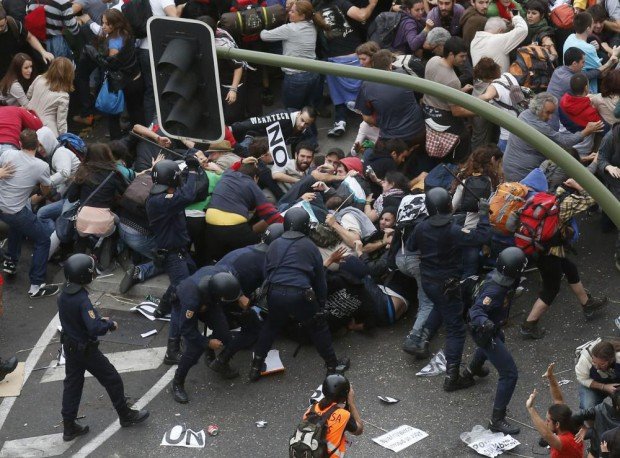 Whether ’tis nobler in the mind to suffer

The slings and arrows of outrageous fortune,

Or to take arms against a sea of troubles,

And by opposing end them? To die…”

The recent enactment of the Vicious Lawless Association Disestablishment (VLAD) Act in Queensland has caused a great deal of angst and whining within various sectors of the normally complacent, apathetic and ignorant motorcycle community.

Most of the screeching is coming from well-intentioned people who have not actually read the legislation, or if they have, they have not understood it.

People who should know better are even calling the VLAD “Anti-Bikie Laws” when the Act is, in fact, no such thing. The world “bikie” or “motorcyclist” does not appear anywhere in the Act. To refer to it as “Anti-Bikie” demonstrates a vast ignorance and is counterproductive to fighting the battle that needs to be fought.

The VLAD Act must be fought on principle.

It is a vile and insidious piece of legislation which is an insult to Australians, the rule of law, and to the basic human right of free association.

That is why it has to be fought by the entire Australian community, and not because and by a bunch of social riders who spend their weekends tooling around various Queensland coffee shops, vaguely aping the colours of one percent motorcycle clubs, have got their colostomy bags jammed up about their illusory “freedoms”.

I can assure you that fighting the VLAD Act has nothing to do with Ned Kelly, the Eureka stockade or the battles our diggers fought defending the interests of the British Empire or the US State Department.

That aside, sectors of the motorcycling community have once again spared no effort in demonstrating why the various state governments hold them in contempt, or why they could not be any more stupid if they drilled a hole in their worthless skulls.

Within days of the legislation being enacted, on-line petitions were started. Now for a petition to be presented to parliament, it must contain a minimum of 10,000 signatures all of which must be from the residents of the state whose parliament is being presented with the petition. Did this happen? Did it shit. 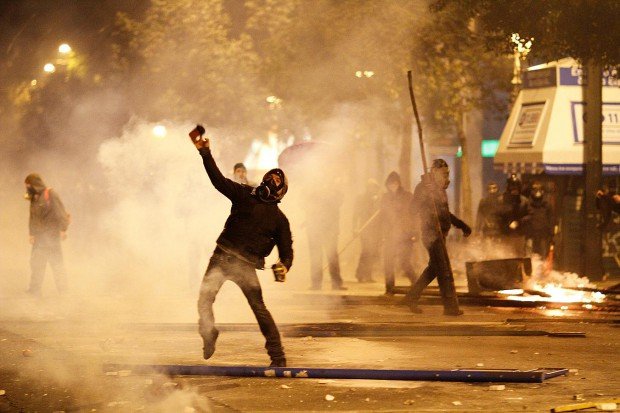 Where is the strength of your convictions?

Sure, signatures were amassed. But how many of those signatories actually lived in Queensland is the question. It’s a fair bet it wasn’t 10,000 of them. Thus the petition will prove to be useless.

Well, the usual brace of retards from Victoria, both failed presidents of the execrable MRA Victoria who are now thumping a similar useless tub of crap, felt it was right to instigate the appallingly-named “Freedom Rides”, imagining this to be a valid form of protest.

Members of the larger social motorcycling clubs immediately jumped onto this bandwagon of retardation. Which was a nice change from them kow-towing to the Queensland Police Force’s insane demands that riders register their ride so that the Queensland cops will not inadvertently inconvenience them when they set out for their weekend lattes.

The irony of this is so rich it makes me gag. The very fact that these “motorcyclists” feel they need to co-operate with the cops in this regard (though no legislative imperative compels them to) which is in and of itself a massive inconvenience, is hugely insulting.

Their behaviour and response to the Queensland Police’s registration demands is disgraceful and shameful.

Now about these Freedom Rides.

The Motorcycle Council of Victoria waded in by heroically sitting on the fence. It cannot decide if it supports the Freedom Rides, or if the Freedom Rides are not worthy of support. Perhaps it will seek legal advice from Maurice & Blackburn in this regard. It is too early to tell.

The Motorcycle Council of NSW has wisely remained silent on the issue, but since it is unable to elect a chairman, or find a way forward at this point in time, that is not surprising.

So what is the problem with a bunch of like-minded people riding to the various state parliament houses on December 1?

Let me explain, since so many motorcyclists are too dumb to grasp what is at stake. 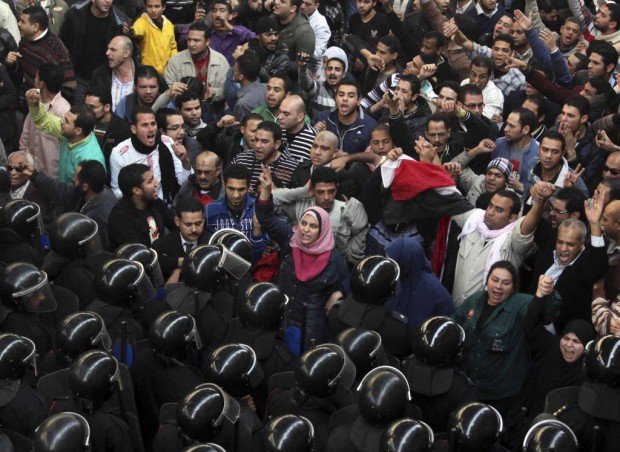 This is People Power. Anything else is horsecock.

1. December 1 is a Sunday. Queensland Parliament is closed and in recess. There will be no-one there but cleaners and security staff. All the other parliaments are likewise shut.

2. Motorcycle protests have never achieved anything in this country. Ever. The few successes that riders have had did not result from a bunch of self-aggrandising fools honking their ignorance through a megaphone to a small crowd of equally deluded idiots.

3. The media will shoot several seconds of pack-riding footage, a few cutaways of tattoos, rings, Southern Cross and Biker By Choice patches, a few seconds of some fool speaking to the crowd, the crowd responding with expeltives about Newman or the Anti-Bikie laws, there might be a few sound-grabs of some bearded ignoramus demanding his freedom to be a bearded ignoramus on his bike, then a cutaway to Newman or the vile Attorney-General Bleijie explaining to the camera that these laws are only targeted at “Criminal Motorcycle Gangs” (note the emotive language) and that someone has to care about the families of Queensland and that they are only doing what Queenslanders want, then another cutaway to bikes riding in a pack. Mum and dad will not even stop chewing their KFC during this 30-second broadcast at the end of the news. They will shrug and get on with imagining that the VLAD Act does not concern them. Cos these are “Anti-Bikie Laws”, dontcha know. Fucken bikies. They deserve everything they get for being scary bastards.

4. No purpose is served by riders in other states riding to their empty parliament houses on a Sunday to “protest” the laws of another state. None. What is served is the self-promotion of the organisers and instigators of this crap.

No media-liaison. No professional press releases explain the purpose of these rides. Nothing but stupidity and amateurism.

Will these rides change anything?

Will these rides raise the public’s awareness of the issues at stake?

Not a chance. Most of the protestors don’t even know what they’re protesting about. There is zero chance of the public grasping it.

The organisers of these rides have no control over what and how the media will present these rides. And you can guess how they will be presented, can’t you?

And the bottom line is that a simple ride to any parliament house is not a protest.

You wanna protest? Then fucking protest. Picket parliament. Picket Newman’s House. Twenty-four hours a day, seven days a week. Demonstrate your displeasure with passion and conviction. Be prepared to be capsicum sprayed, trampled by police horses, battoned like a slave, and hauled off to jail for those beliefs. 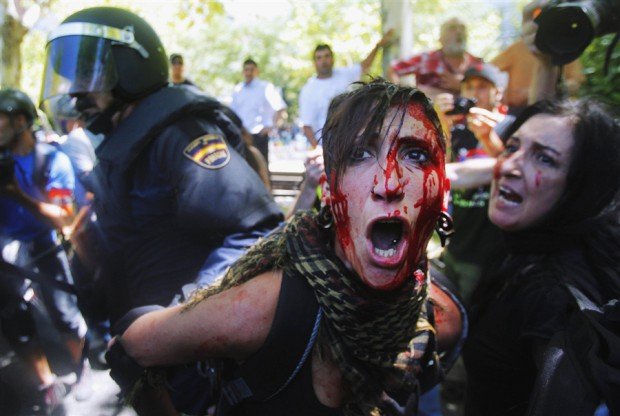 Let me show you “protest”.

Or just fuck off with what is nothing but pre-planned bullshit tokenism.

What else has happened?

Well, the Australian Motorcycle Council has started to ask for donations for a possible High Court challenge at some indeterminate future time (which is hugely problematical), but to its credit, was the only voice at a recent meeting with the Queensland police which did not agree that motorcyclists should register their rides with the Queensland cops. And for this you have the wonderful Ms Eva Cripps to salute. That woman has more balls than the entire collective of tattooed, vest-wearing pirates who came to that meeting with their heads bowed in supplication.

But that’s about it. Oh, there’s lots of howling on social media. But that’s just more worthless tokenism.

What can be and should be done?

Well, if 1000 people wrote three emails a day to all of the members of Queensland parliament and followed up each email with demands for answers, and also sent two registered letters a week to Newman and Bleije and the police commissioner (registered letters must be signed for), and those 1000 people did this every week until the bureaucracy exploded under the weight of correspondence, that would help.

If those same 1000 people sent letters to all the Chambers of Commerce and the Federal members that are concerned with small businesses, as well as the tourism boards and to the various Japanese travel agencies who send tourists to Queensland, and they did this day in and day out and explained what effect the VLAD Act will have upon anyone who dares venture into Queensland, the effect would be staggering.

But guess what? None of that is as sexy as saddling up and riding with your brothers of the fucking handlebars to an empty building, congratulating yourself on having done your bit, then going home and whining on Facebook about something more needing to be done, is it?

Do not be stupid and imagine this is a free country. It is not. You have only the freedoms you are permitted to have by your rulers and nothing more. Stop kidding yourself.

And stop being lazy, apathetic and stupid.

Though I know that’s a big ask.