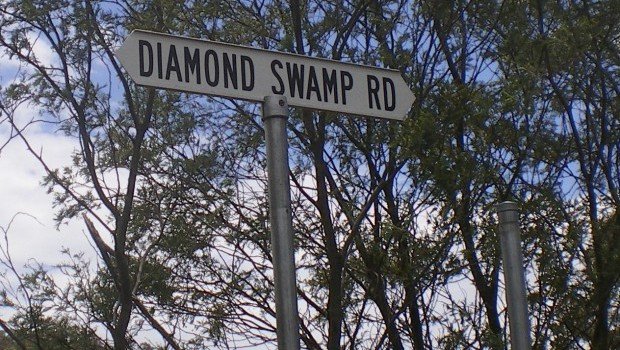 The moon was full and high in the west when I rolled out Friday at 0225. I followed it down the M2 motorway.

I’d taken Wednesday off and gone exploring the excellent roads around Orange with Bubba. On the way back, on the lonely Tarana Road, I noticed that my tailbag was unfastened. I stopped and fastened it, and rode back a couple of hundred metres looking for anything that might have fallen out. Two hundred kilometres later, I was home when I noticed that my Kindle Fire wasn’t in the bag.

It’s got over a thousand books on it. It’s a pain in the arse to replace.

So I told my wife that I was leaving at 0200 Friday to look for it, because the weather forecast said it would rain all day Saturday up there. She rolled her eyes. To her credit, she didn’t suggest I take the car.

The M2/M7 was deserted. Likewise the Richmond road. Heading west from North Richmond, I wondered where the cop would be. The Bells Line of Road winds through the mountains and lots of trucks come in from the west. Occasionally one falls over. The road gets patrolled aggressively.

There was a Highway Patrol car parked in the BP service station. A cop was coming out of the servo with a cardboard tray of food and drinks. Ha! I increased the pace. There wouldn’t be two.

It’s good, riding at night. The traffic is light, the engine seems to run sweeter, and my motorcycle has two headlights.

The moon dropped below the horizon near Lithgow. I continued out on the highway and stopped near Kelso at the BP. I filled my tank and tried to buy a coffee. The servo attendant said no charge, and help myself, so I did. The cop patrolling the Great Western Highway drove past while I drank it.

It was pretty well 0500 and first light when I turned on to the Tarana Road. I went slowly, watching for kangaroos. After a while, I saw one on my right. She ran in the same direction, and I buttoned off and let her take the lead. After a while, she turned across my path. They always do that. Stupid ‘roos. That is why they die.

She kept on the left side of the road, with the fence to her left. There was an open gateway in the fence, with a dirt road through it. I dropped back to first and accelerated hard to panic her, and she cut left and skidded on the dirt. Sometimes when you do that they roll, in an explosion of legs and tails and stuff, but she handled the slide and exited left.

I found where I had noticed my undone bag on Wednesday. I couldn’t find a Kindle Fire on the road. I continued on to Tarana. Something small and fast ran in front of me, close enough that I was surprised I didn’t hit it. I saw a flash of white. A rabbit, maybe, with a white tail.

More ‘roos, but not as close. Magpies and grass parrots and rosellas swooped across the road, and a magnificent sunrise did its stuff behind them.

I turned north at Diamond Swamp Road. I’d never ridden it, but I’d seen it on the map, and I knew it ended up back on the Great Western Highway. It’s a good road, and I will ride it again.

The GPS told me that the next turn on the right was Curly Dick Road. I decided I would stop and take a photo of the sign. I stopped. The signpost was there, but someone had stolen the sign.

Then back on the highway, and Lithgow, the climb up Scenic Hill warming the tyres, and through the devastation caused by the recent State Mine Fire. I decided that if I was pulled over by the Highway Patrol, I would MacBeth them:

“Upon this blasted heath you stop our way

With such prophetic greeting? Speak, I charge you.”

…and see if they vanished like witches. Worth a try.

A little after 0600 by now, and a great time to cross the Blue Mountains on the Bells Line of Road. The engine runs sweetly still, the traffic is almost non-existent.

Western suburbs commuter time hits as I approach Blacktown. I lose maybe ten minutes being in roadworks where I can’t pass. Then it’s the M7/M2 and a game of 120 km/h leapfrog with a guy on a Multistrada.

“You okay?” the boss asks, looking at his watch.