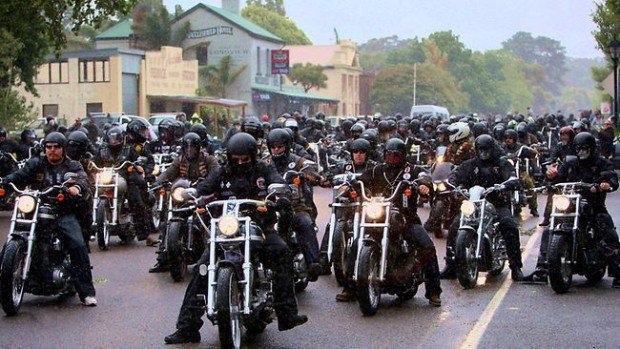 THERE’S NO FREEDOM IN TRUTH

And you’re not intimidated by this?

There’s no let up.

And it’s working. It was always going to work and that is why those who rule us do it.

I speak of the demonisation of outlaw motorcycle clubs and their members.

Of course, like any demonisation process the government undertakes when it finds it needs to tighten our slave collars a notch, it is based entirely on lies.

Do I need to list the flood of bullshit we have been fed in the last two decades, or are you across that and somewhat numb to it all? Well, don’t be numb. Numbness is only good when your dentist is cruelly spearing your gum-meat with a hooked prong. The rest of the time numbness plays directly into our rulers’ hands.

You have been lied to about almost everything in recent times.

On the world stage, you have been lied to about the Balkans conflicts, the invasion of Iraq and Afghanistan, the Israelis, the Russians, the Indonesians, the Greeks and the greatness and goodness of monotheistic religions. Everything you have been told about these things, and everything you imagine you know about them, is a lie.

The truth is invariably the polar opposite of what our rulers want you to think. And the truth is certainly there if you would but care to look past the nauseous torrent of spin that gushes from our infantile media like a geyser of over-simplified mass retardation.

You see, the media, like our rulers, likes you to be stupid. And it encourages you to remain that way. Things work better for them if you just accept what you’re told.

As for those who do question and do seek out the truth behind the lies, well so what? There are not enough of them to make any difference to the status quo.

Many of us know the truth and we are just as enslaved and powerless as those who live and believe the lie.

The difference is that our slave collars chafe us. We have not yet padded them up for long-wearing comfort.

The Serbs were not the only bad guys in the Balkans, the Iraqis did not have weapons of mass destruction, the Afghan fighters were created by the very same people who then invaded them, the Jews are not to blame for the endless attacks the Arabs inflict upon them, the Russians are not the evil from the East, the barbarous Indonesians are not our friends, the Greeks did not have it coming to them for being lazy bastards, and both Islam and Christianity are the living manifestations of despair and evil.

The same is entirely true for outlaw motorcycle clubs and their members.

They are not at all what you’re being told they are.

It’s a fact that these organisations and their members are responsible for less than .06 per cent of all crime in Australia. The cops themselves admit that.

But that has not stopped the various state governments, cheered on by the media (whose fall from any grace it might once have had is total and vile and without any end), from waging a relentless war upon their existence.

Why? Because it’s easy to do so and it makes it look like evil is being fought.

The fact that there are more criminals within the police ranks, sitting on our parliamentary benches and ministering to various religious flocks than there are in one percent clubs, is entirely irrelevant.

The evil that lives in normal society is hidden and treacherous and tears at the very fabric of human society and decency. But it is simply too vast and monstrous to ever be addressed.

It’s much easier to crusade against outlaw motorcycle clubs – who have very little to do with normal society.

For here are men who openly and honestly display themselves for what they are. A brotherhood of like-minded individuals, easily identified and proud of what they represent. And they are inward-looking and self-absorbed. They are certainly not out to destroy society, for without society, their could be no anti-society.

You don’t get it?
You’re not meant to.
You believe what you’re told about them by a feckless government and a shitful media?
You’re an idiot without redemption.

They are searingly honest about what they are.

And what they are is nothing more or less than a highly structured organisation that looks scary to society. Which only demonstrates how vapid and stupid society has become, since it is more terrified of a man with tattoos and a leather vest, than it is of a corrupt policeman, politician, or priest.

Certainly, not every outlaw club member is without sin.

But as the much-maligned Slobodan Milosevic stated about his people during his engineered trial in The Hague: “We Serbs are not angels; but we are not the devils you make us out to be.”

Understand that you will only know what you want to know.

And if the only thing you want to know is what you’re told by people with a vested interest in controlling your every thought and action, then your very existence is an insult to humanity.

I far prefer to acknowledge the wisdom of Hunter S Thompson, one of the greatest iconoclasts we were ever privileged to share time and space with.

“Weird heroes and mould-breaking champions exist as living proof to those who need it that the tyranny of ‘the rat race’ is not yet final.”

But don’t worry. Your next serving of cheese is coming right up.