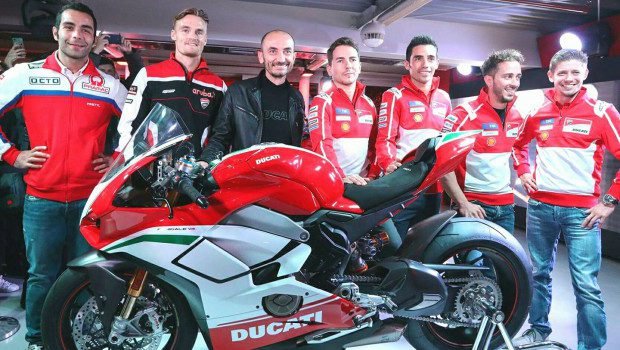 ” There is a big Casey shrine in Matthias’s office. He lights lots of candles in there every day and makes the sign of the cross over every one.”

Have you had a stroke? Is that what accounts for your inability to smile at people who plan on buying a new Ducati? Yes, I know EICMA is a huge pain in the culo, but it comes with all those millions of Euros Matthias is paying you.

I spoke to Lin about this before the event and he told me he used to have YSP (Yamaha Smiling Practice) for you before every EICMA. Rossi, he said, was a natural and would smile for his fans even when he had intestinal worms. You, on the other hand, always look like a, how did he put it? Una goccia che lecca pazza fuori da un posto…um, “a goat licking piss off a post”.

How is Matthias meant to put this in the Annual Shareholders Report?

Then we have Chaz. I think Chaz is Matthias’s youngest nephew on his wife’s sister’s side. Chaz comes from a village in Saxony and every day he carries a dairy cow on his back for a few hours. He says it makes the cow give better milk.

Next to Klaus is Claudio. Or as Mathias likes to call him, ‘Mein dünnes kleiner italienischer Golum’ – and Claudio is happy because Claudio has worked out where to put all those MotoGP engines from 2010 onwards which Ducati doesn’t want anymore, and has saved Matthias millions of Euros.

On the far right we have Casey. You remember Casey? He doesn’t remember you, but I’m pretty sure you know who he is. There is a big Casey shrine in Matthias’s office. He lights lots of candles in there every day and makes the sign of the cross over every one. And he is not praying to God, George.

Next to Casey is your team-mate Dovi. Matthias will build another shrine in his office if Dovi wins on Sunday. It will not be as big as Casey’s shrine, but it will have candles in it as well.

And next to Dovi is Michele. See? I told you Michele was not a woman even though he has a woman’s name. Matthias also likes Michele because he doesn’t know who Michele is. There is no budget allocated to Michele, and just between you and me, he’s actually racing an old Honda we’ve painted red and put Ducati badges on. No-one knows or cares. But Michele is happy, as you can see.

Are you happy, George? You are not smiling, so I’m guessing you’re not. Would it have killed you to fake a smile? Could you not have imagined Rossi cartwheeling through the Sepang grandstand with all seven of his legs flying off into space?

You can’t still be in mourning for Uccicio? Is that it? Are you still writing Crutchlow’s name in merda on the door of his motorhome? You know if he catches you doing that there’s going to be a problem. At the moment Cal thinks its Smith, but he also sometimes thinks it’s Zarco because the French have always freaked him out, and he says he can see cheese in the merda.

Look, I’m going to have to schedule another photoshoot before the weekend. Don’t make me put the special happy medicine into your water, OK?

You can do this, George. I have faith.