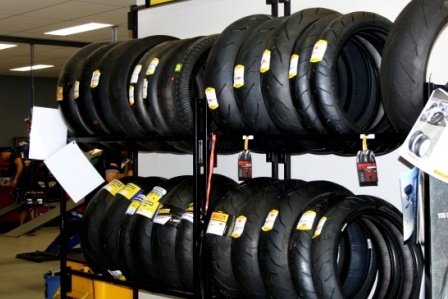 Have some of you shaved apes been bleating about how slippery new tyres are? You have, haven’t you?

And some of you have even fallen off on those slippery new tyres, then further demeaned yourselves by having your letter commemorating the occasion published in a widely read magazine.

And this is after the nice man in the bike shop told you to “take it easy” until you’ve done a few kays on your new tyres, wasn’t it? If you appeared especially stupid, he may have even put a bright sticker on your tank telling you once again about your tyres, in case you weren’t paying attention before. And this is not because he cares about you.

Privately, he burns with hope that you’ll skid into the back of a tank the second you’re out of sight of his shop. But he tells you about your new tyres cos he doesn’t want you, or your estate, to sue him.

So what do you do after he’s told you this and put a sticker on your tank? Do you “take it easy” for a few kays as instructed?

Of course you don’t.

You crash. Or you almost crash and scare yourself. Or you rub the sides of your tyres with sandpaper and clip off the pointy bits with nail clippers and write to magazines so’s other people can delight in your life as an arsehat.

At first, I thought youse were having a lend. Or that you snuck away from some idiotic internet forum where retarded beginners wonder about which glove to put on first, or if the rain’s gonna hurt their bike.

Then I realised you were actually serious – and I wondered yet again why so many of you suddenly decided you ought to ride bikes, when riding bikes is really not something people like you should be doing. And especially when those bikes are fitted with shiny new tyres.

Motorcycling obviously scares and befuddles you – and if that is the case, you’ll probably die or be maimed in the very near future. Which is entirely a matter for you, and a wondrous act of natural selection for the rest of us.

If shiny new tyres are impacting negatively on your “enjoyment” (though that’s perhaps the wrong word, so feel free to use “sufferance” instead) of motorcycling, there’s a fair chance other important stuff bothers you as well.

Ready to get their hate on

Not able to take any responsibility for yourself and your actions when dealing with virginal rubber, you nonetheless have strong views regarding passive safety equipment and how vital it is to every rider’s safety. But because you’re also a bovine idiot, you cannot grasp the distinction between “feeling safe” and actually being safe.

Cos you are not ever safe on a motorcycle.

People like you are too befuddled and frightened to ever be “safe” on the damnable things. And your riding days are numbered as a result – but as we’ve already established, this is not necessarily a bad thing for the rest of us.

Quite frankly, unless riding bikes makes you burn with passion, sing with delight and laugh with madness, you have no business doing it. Unless lashing through corners thrums glee through your being, and life-affirming acceleration bathes you in glory, you should get while the getting is good. It just ain’t for you.

Look, I know you thought it was cool and your mates had bikes and there is, admittedly, a certain perverted thrill to pulling on the gear and making sure you “look” the business to people who don’t know what the “business” actually is (like your mum and the chick in the hatchback who will one day crush you like a bug beneath her alloys), but if you were really honest with yourself, you’d be forced to admit the whole motorcycling caper is actually quite frightful.

Especially when you get those slimy new hoops.

Now don’t get upset. I’m one of those riders who don’t wave at you in traffic. I have issues. I hate pushbike riders clogging up major roads, hairy women, bad beer and cats – and I wear an open-face helmet, so I don’t know all that much about certain things. I also don’t think that “going for a ride on Sunday” means tooling along the most heavily policed roads in creation, at or near the speed limit, to a coffee shop frequented by people like yourself, so we don’t have a common philosophical ground to stand upon either.

Getting upset with my views and writing outraged letters will not avail you. I still will not wave at you while I’m paying attention to riding like it meant something, and you will still be wiped out cos you’re frightened and befuddled.

So don’t waste what little time you have left on that spooky, new-tyred motorcycle being all pouty with me. I love motorcycles and the riding thereof – truly, madly, deeply and honestly. Motorcycling is demands that – you’ve gotta love it beyond reason so that it finally makes utter sense.

So I’m not the problem.

Me not waving at you is not the problem.