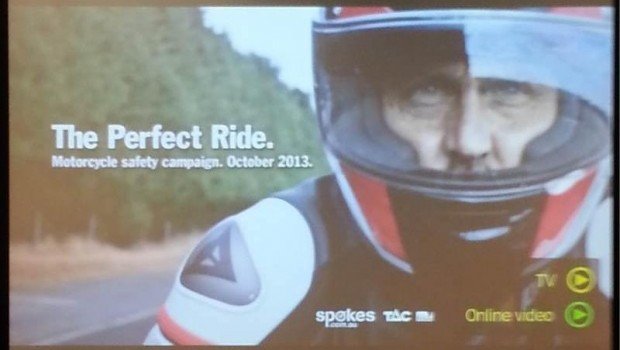 It’s something that we all seek; that ride where everything is just perfect. It doesn’t matter if it’s blisteringly hot, freezing cold, teeming with rain or perfectly clear, dry and temperate. The perfect ride can be found in any one of those situations when a series of inputs combine and form that feeling in our heaving brain.

On the 8th of Oct, 2013, the Transport Accident Commission (TAC) officially launched its latest motorcycle advertising campaign and dubbed it ‘The Perfect Ride’.

Yeah, right. What would TAC know about that kinda stuff?

I brought a healthy dose of skepticism and took a seat among a throng of Victoria Police representatives, a few TAC staff and a handful of media and interested persons. Interestingly, the TAC staff were rather pleased I had come in by bike and seemed to be genuinely interested in how the ad would be received by a rider outside their think tank and advisory groups. I was genuinely interested to see if they’d learned anything from the shaming that came as a result of the parliamentary inquiry into road safety that took their previous advertising ‘Reconstruction’ to task.

The TAC Minister – Hon Gordon Rich-Phillips MLC, informed us that the focus of the campaign is recreational riders. We were told that 80% of riders ride on the weekend for pleasure and were reminded once again of the statistics surrounding motorcycle registration numbers (4%), number of kilometres travelled (1%) and the relationship to the road toll (15%) and trauma costs for the TAC (20%). Which was nice, I thought.

For the first time attention was being focused on the very serious injury aspects of road safety as well as the mortality figures. The previously heard terms such as ‘vulnerable road users’ came out but I detected some recognition of factors that riders have been aware of for years; those being to ride within your abilities, hazard perception and risk mitigation. These were the key themes of the new campaign and had me cautiously optimistic about what I was to see in the advertisement.

The television ad was produced without regard for the fascist wishes of the Queensland police service and depicts a group of three riders having a ride on some nice roads. The TAC ad superimposes a turning vehicle, a merging vehicle, gravel mid-corner and a car that is over the centre-line of the road and how this would affect the group of riders. It highlights a series of risks and then has you to think about your own riding in similar conditions and how you’d deal with that risk. A remarkably grown-up approach and my initial reaction was that it wasn’t a bad ad and blissfully free of fluro.

We were then introduced to Mr Rick Williams who is an instructor with Armstrong Rider Training and who was involved in the production of the ad as well as four riding tutorial clips that are on both the http://www.spokes.com.au website and the TAC You Tube channel. Rick was once a a construction worker until he decided to get intimate with a stone wall while avoiding skippy on a ride several years ago. During his months in hospital he thought of his opportunity to learn from his mistake and how he could help teach others so that they may learn from his experiences, hence the change of career. The tutorials are there to be talking points about good habits and highlight how quickly things can go wrong. Rick also sings the praises of appropriate protective gear. These are largely aimed at the new or novice rider but there is something there for everyone, really. 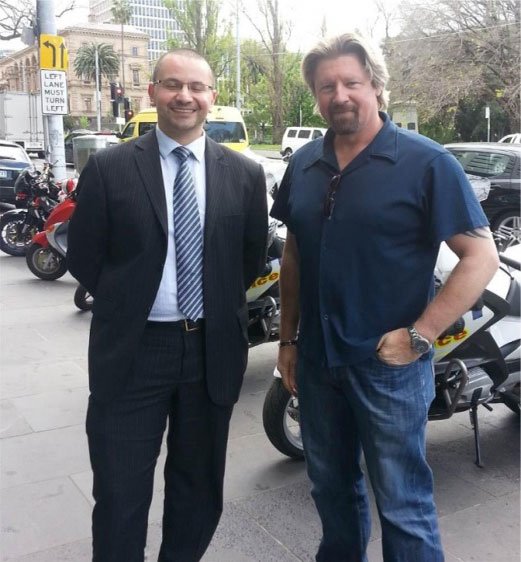 I give the TAC and involved parties 7/10 for this campaign.