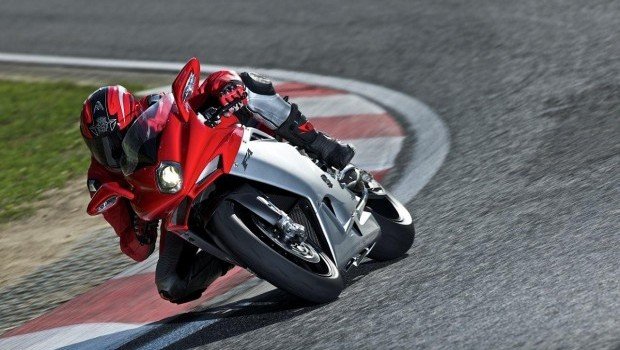 Does your wickedness know no bounds? Are you completely without pity? Have you no sense of propriety?

How can so much base cruelty reside in such a compact package?

You have cursed me and I am truly damned.

And as long as Don Tamburini’s seditious red sex-rack sits in my garage, demanding I mainline its growling evil until my arteries burst and police snipers farewell me with well-placed rounds, I will remain that way.

And you, sir, are totally responsible.

What the hell’s going on here?

Why is that red thing still hunched in the shed beaming its sexy-time sorcery at me?

Why haven’t you asked for it back? Surely there is someone else you know who needs his neatly-piled shit kicked all over the paddock?

Don’t you know that I’m irresponsible, cynical, arrogant, and offensive? I drink, I gamble and I’ve been with loose women.

I have absolutely no business riding an MV Agusta 312R.

Mr Feeney, the cops look at me like I’ve stolen the damn thing. I have tattoos, for Christ’s sake!

What the hell were you thinking when you gave it to me?

Don’t you understand that I do not have the coping skills for this?

Have you forgotten how these bike-test thingies work?

He doesn’t set up bloody house with it!

It’s like suddenly attempting a meaningful relationship with a long-legged, perfectly-featured, centerfold sex-princess after a lifetime of dating fat-chinned mooters who smell like ulcers. But, as you well know, sir – exotic and dangerous girlfriends are not long-term prospects if a man wants to retain his sanity. A night or three, sure. Perhaps an extra few weekends if you’re still in denial each time she kicks off her $200 panties, pours Cointreau down her belly and starts dancing on the coffee table in six-inch heels. But certainly not longer.

Surely a man of your wisdom and experience would know this? You’ve surely got the look of a man who’s seen some things.

Well, I’ve seen some things, too.

Just the other week I saw this stunning girl actually stop as she was crossing the street, walk over to where I was sat at the lights, put her hand on my arm and say in a voice tinkling with sin: “That is the hottest bike I have ever seen.”

Had I been 20 years younger, I would have shown her that it was indeed the hottest bike in the world by sticking her on the back and seeing her fabulous leg-skin blister from the radiant heat of its exhaust system.

But cos I was sweating like a gnu, and she spooked me, I only made fish-noises at her until she walked off.

As you can see, Mr Feeney, my coping skills are just not up to dealing with over-stimulated bank tellers – and I shudder to think how embarrassed I’d be if it happened again – especially as the summer heats up and office girls wear less, strut more and become bold enough to stalk me while I’m minding my own business and baking in traffic.

And then there’s the criminal intensity this two-wheeled wog-fetish has injected into my riding.

Well may that Nicky Hayden ask, “What’s up with that?”

Cos ever since I realised that pain was just a sign of weakness leaving my body, not a damn thing.

After all the miles we’ve done, the pain has either gone or ceased to matter – and thus transcended itself. All my meaty stuff that used to hurt, no longer hurts. Some of it just goes automatically numb when I pull the ignition key out of my pocket; the rest seems to have acclimatised to the ergonomic challenge – which I freely admit is a vital part of the whole MV encounter. The world’s most intense riding experience quite rightly treats one’s comfort levels with contempt. Riding MVs ain’t about gently cradling one’s jelly-filled glutes, or allowing one’s creaky old-moll blood to go where it wants.

Riding MVs is all about riding MVs. Deal with it, or admit it is beyond you – because you are too much of a passionless (but practical) butt-cork – and go out shopping for frocks.

You, Mr Feeney, have known this for a long time, haven’t you?

And you still gave it to my fat arse?

But I have dealt with it. I am frock-free.

In 30-odd years of motorcycle riding, this is the first motorcycle I can say that about.

And thus while it resides in care, my life becomes an ever-deepening pile of shit and madness.

Say Hi to the Husky Chix for me.