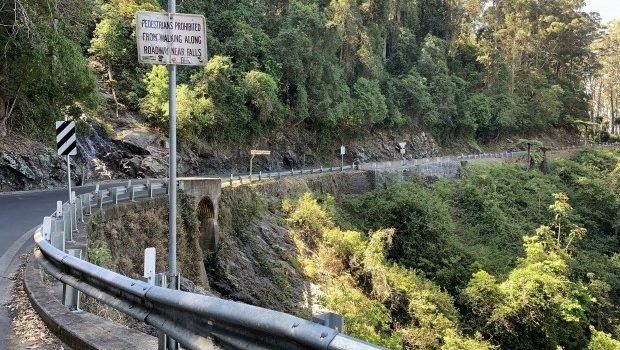 Gonzo and I stopped for coffee at the Grey Gum Café on the Putty. It was raining a little when we left. I had my earphones in. The Rolling Stones were soliciting the delivery of dead flowers. We rode a measured wet race. We were maybe thirty minutes behind time.

Boris sent two text messages before we stopped, and left to scrape our remains off the Ten Mile and kick our bikes into the table drain. He saw us as we stopped for fuel at Singleton. We brought him up to speed.

“The plan is”, I said, “to pay homage to capitalism by lunching at the Bank Hotel at Dungog.”

He nodded and reached for his ignition key. I pointed at him. “Follow him”, I told Gonzo.

The road was bumpy but scenic, and good in parts. The lamb cutlets at the pub gave uniform satisfaction, as did the beer.

We headed for Walcha. We stopped a couple of times and told each other we should take it easy from now on and then got back on the bikes and didn’t take it easy. 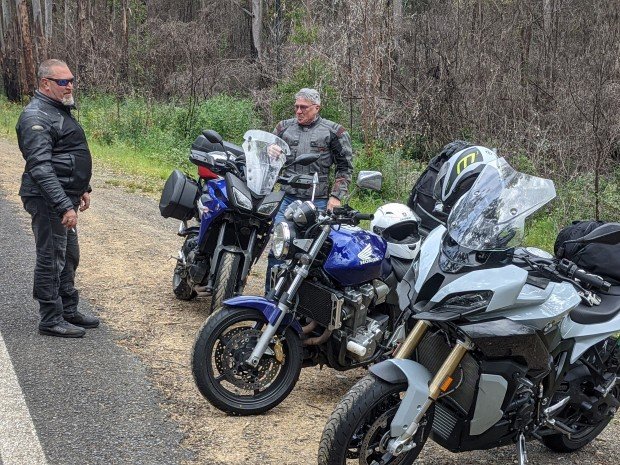 “We’d better take it easy from here on.”

Andy at the Walcha Motel said he hoped we hadn’t made dinner plans because he’d cooked a big pot of spag bol. We told him we’d join him for dinner after washing the dust of the road from our throats at the pub.

We had a couple of beers. We stopped by the liquor store and bought four bottles of good wine. We drank two with dinner, and went outside to take in the night air with the other two and tell stories. When they were empty Andy found a bottle of port. When that was empty we went to bed.

I felt a little dusty the next morning.

Andy got his FTR out for Boris, and Boris gave Andy the keys to the BMW S1000XR. They went for a ride around the Walcha test loop. Woody and Mick and Mrs Mick turned up.

We rode the Oxley Highway. It’s magnificent. I wore earplugs instead of earphones. You have to concentrate when you ride with that lot. We stopped for coffee at the Gingers Creek roadhouse. 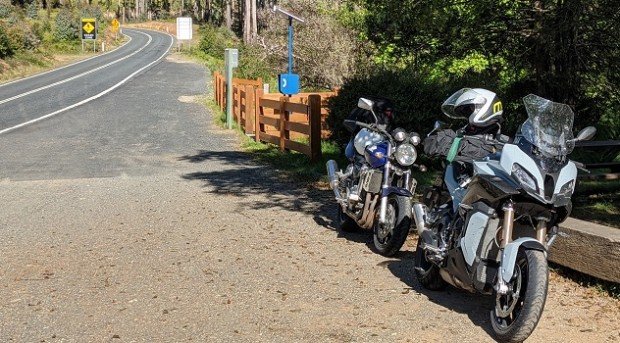 The bit after Ginger’s Creek is even more magnificent. Boris had to be back that afternoon to take care of business. He turned around at Long Flat and went back to ride it again. The rest of us stopped at the Travelers Rest for morning beers. The pub cat was asleep on a bar stool. “Is he okay with strangers?” I asked the barmaid.

“He’s a pussy”, she said. I’d worked that out. “He’ll let you rub his belly”, she added. I took a photo of him and texted him to the girl child. She replied “I LOVE him!”

“What’s his name?” I asked the barmaid. 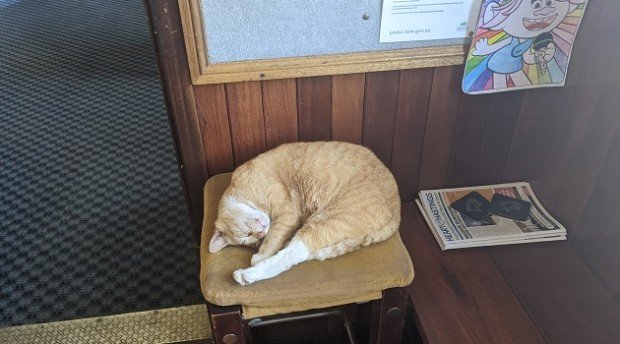 All that killing takes it out of you.

Gonzo left to go back to Sydney and attend a funeral. “The plan is”, I said to the others, “to pay homage to capitalism by lunching at the Commercial Hotel at Dorrigo.”

We rode north up the motorway. I had the earphones in. Bob Dylan was on the pavement thinking about the government. The motorway was tres boring. It was lunch time way before Dorrigo, so we stopped for lunch at the Federal Hotel at Bellingen.

The Waterfall Way from Dorrigo to Bellingen is magnificent. We took the Tyringham Road from Dorrigo. It’s windy but a little rough. A big carpet snake went across the road in front of Woody. Woody and I stopped at Dundurrabin for an hour to visit a mate and then took the Nymboida road to Goulburn.

We all stayed in the same motel at Grafton.

“The plan is”, I said the next morning, “to pay homage to Snowy by lunching at the Lunatic Hotel at Drake.”

Woody knew a shortcut that bypassed Glen Innes. The road west from Grafton over the Gibraltar range is magnificent. We stopped at the Raspberry Lookout and enthused. I told Mick and Woody that I went for a slide on some loose gravel on the road at one place and they said they did too. I told them I went for a second slide on the gravel ten metres later. They looked at me as if I was a slow learner. I told them the rear tyre let go for a second as I was setting up the right-hander before the lookout near the parked red car. Mick said his did too. Whatever it was, Woody missed it.

I put the earphones in for the ride up the New England Highway to Tenterfield. Alvin Lee was going home.

It’s not an intense ride. I put the earphones in again. Phoebe Snow recommended everybody get in the mood and let the good times roll.

We diverted through Lawrence, where we stopped at the tavern and drank a beer and watched the river flow. I calculated that I’d crossed or traversed eight mountain ranges so far.

“The plan is”, I said the next morning, “to pay homage to capitalism by lunching at the Commercial Hotel at Walcha.”

“That’s past our place” said Mick. “We’ll stop for coffee at Ebor and say goodbye.”

We rode the Nymboida road again. The weather was a little cool. We got to Ebor. It was bloody freezing. Mick said when it’s snowing at Uralla and you think it can’t get any colder and you go for a ride, it is somehow colder in Ebor. A surly woman took our order and it took close to thirty minutes to supply coffee and tea. I looked at the GPS. It said we were thirteen hundred metres above sea level. We drank our drinks and said our goodbyes.

I put the earphones in again. Eric Clapton was knocking on heaven’s door. We rode the tail end of the Waterfall Way. I turned off to Walcha. I arrived at the Commercial a bit after midday. So did Gonzo. We each had a shot of Tennessee whiskey and a beer to warm ourselves. We had lunch. We decided that we should ride the Port Stevens Cutting. We chose Nundle as our base. Gonzo called the pub and booked two rooms. We had another beer and left.

I’d never been to Nundle. It’s a scenic ride in. I had the earphones in. Half Man Half Biscuit were complaining about bad losers on Yahoo Chess. Gonzo is a whimsical man at times, and diverted us to the Hanging Rock lookout on the way in. It had nice views, but none were of a rock that appeared to be hanging, or appeared to be capable of having a rope attached in order to stretch the necks of the recalcitrant. 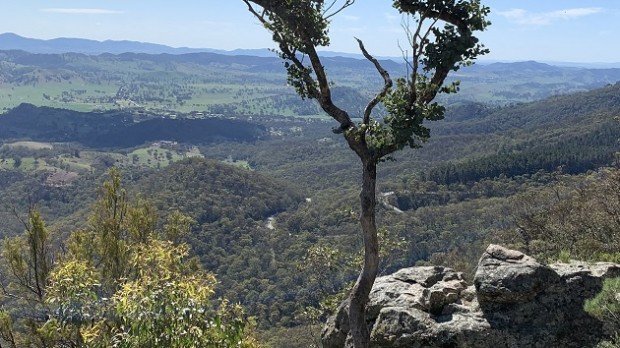 We got rooms at the pub. There were lots of Ducatis in town for the Virtual Thunder Rally. Apparently instead of nine hundred people turning up, a mere thirty do, which makes it virtual and okay. We had three or four beers. We had a spicy shiraz with dinner. Gonzo had a large hip flask full of Glenfiddich 18. We drank it and started on the pub’s supply of Glenfiddich 12.

I felt a little dusty the next morning. 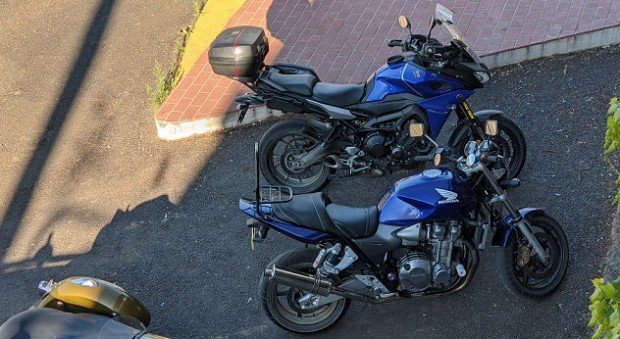 What did I do, to be so white and blue?

We retraced the scenic ride in and found the Port Stevens Cutting. It’s a road worth riding. The altitude peaked at thirteen hundred and twenty metres. The scenery was spectacular up there. The surface was good. It was cold.

I put the earphones back in for the Bucketts Way south of Gloucester. It’s low intensity. Harry Manx was complaining that he can’t be satisfied.

We stopped at Raymond Terrace for a pie. We were two and a bit hours north of Sydney. Gonzo said he was going to listen to podcasts on the way home. He said don’t bother to stop if I saw him stop.

I put the earphones in. Men at Work wondered who it could be now.

The last two hours to Sydney were tres boring too. I counted the mountain ranges I’d crossed. Ten if you count Port Stevens Cutting and Thunderbolts as one. Average: two per day. Life could only be better if there was a MotoGP on the television that night.

There was a MotoGP on the television that night.