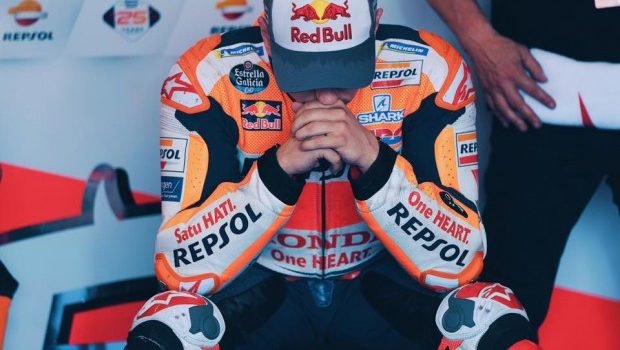 “The choking started when that rubbish Honda he has given me to ride once again took off its brassiere and put its floppy orange Satu Hati Mati Fatis into the gearboxes.”

I am very concerned about Poo-eegah. He has not stopped screaming and crying and kicking for several hours now. I can hear him over the singing of Ricky Martin in my headphones.

Gigi was bad when he made the big mistake on race-day. Sometimes he would pull the hair from his face, but he did not make as much noise as Poo-eegah.

It is the choking sounds that are most disturbing. Maybe he has put his tongue in his lungs, I do not know. I am not a doctor.

I think the choking started when that rubbish Honda he has given me to ride once again took off its brassiere and put its floppy orange Satu Hati Mati Fatis into the gearboxes. The gearboxes cannot take such a load.

I told him this. He made the noise of the polar bear at me. “GRAGHGHRALL!” like that. So I go and make the excellent race because I am a champion and then just as I was preparing to overtake and make the good rhythm at the front, the bad thing happens.

Is not a big problem for me. I could still make the overtake and probably win. But I take pity on Poo-eegah. He curls up and trembles whenever I bring the stupid Honda back and there is terrible liquid coming from behind the fairing and it has eaten its Satu Hati Mati Fatis.

So OK. Never mind. This is the stupid first part of the season that doesn’t really count. We go to stupid countries where nobody likes us, but the Mad-Eyed English Puta likes to wrestle the crocodile and the cow, and eat from the gravel, so we go.

Now we go to my country. Everybody loves me there. The king is my friend and both my fans can climb the fence and make the cheering for me. The Mamba is the racing eagle of the mountain cliffs in Spain. Now the championship can truly begin! Now you will see the butter glisten and the hammer dance.

But there must be more improvement with the orange rubbish Poo-eegah makes me ride, Ramon. I know you do things here in the garage. I am not sure what they are and they are not very important. But I know you speak the Eskimo language with Poo-eegah. I see you holding him often, like a wife who has a husband who drinks and goes with whores because he cannot help himself.

So next time you are rocking him in your arms, say to him: “Poo-eegah, the Repsol Grande di Mamba Gloriosa y Stupenda y Spartano Magnifico has had enough of the exploding rubbish. He needs stronger Satu Hati Mati Fatis and more robust gearboxes in the high-stress mechanical areas of the telemetries.”

Write down if you cannot remember because it is very technical.

And thank you for bringing me always the fresh towels for my neck-sweat.