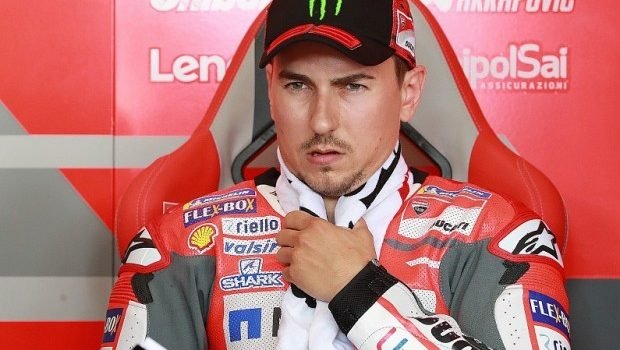 “The boy-whore, Bautista, has dyed his hair purple for his next job, which is dancing on dirty bars while sailors push money into his golden underpants…”

Has he gone yet? Madre de Dios, surely he has left by now? And about time too. His ears had been blocking out the sun.

I have been telling you to get rid of him and his dinner-plate ears and his impossibly attractive wife for months now. And now that I am leaving to be the Supreme Repsol I find out you finally did what I told you to do.

As always, Gigi, your timing, like your haircut and your breath, is mierda.

What purpose did he serve anyway? The money you paid him could just as well have gone to me, you know. His Spanish was terrible and he refused every milkshake I offered him. All he did was tell me how he fast he used to ride that Ducati rubbish you idiots then inflicted on me.

I had to spend an entire season re-developing the ergonomics to a proper championship level. I am very good at things like that, but even then it was not easy, you know.

And all the time he would be there, looking over my shoulder as I completed detailed technical drawings for the team and making stupid comments like: “Why do you need that carbon-fibre pole to go up your arse?” and “That cushion on the tank is going to fly off.”

He was also constantly whining at me to use “More throttle and less brake” and saying things like “It’s just a bit of rain. You won’t melt, ya big sook!” and “Jeez, mate. How about some effort? You’re not here to fuck spiders, you know.”

What kind of uncivilised, tray-eared, Austrian tarantula raised him? I am now even more glad to be going to the Bushidos at Repsol. They would never be stupid like you and allow him to breathe the same air as a champion like me. The Bushidos would get him air from somewhere else. There would not be enough Satu Hati Mati Fati Bati to go around at all.

OK, so now we are in Valencia, where the gypsies grow the sour oranges and steal the German cars from the tourists. But since I have decided not to compete for the championship anymore, I think it is best no-one races on Sunday. There is no point. I would have won, and everybody knows that, and I have to ride my first Repsol on Tuesday, so I need to focus on that.

The Championship is over, Gigi. Everybody is finished, you know. Look around the paddock. The Criminal Redding has already sold everyone’s spare leathers and bought an old van to sleep in next year. The boy-whore, Bautista, has dyed his hair purple for his next job, which is dancing on dirty bars while sailors push money into his golden underpants, and that sobbing idiot who had the irreplaceable honour of being my team-mate is busy trying different brands of waterproof mascara for the farewell dinner on Sunday. I can see him through the window.

All that is left is to see if that filthy Yellow Puta can be crushed into a shameful third place by his team-mate – the one named after a stray horse from an old airport movie where oily men played games with balls.

Oh, and we must all wave goodbye to the Dwarf Puta as he pushes his wheelbarrow full disintegrating collarbones to Austria. That will not take long because he is short.

And no-one really cares about that. So why are we racing then? I mean, apart from showing myself to the people who came to see me, what is the point?

They need to drink water as much as they need to see me ride like the Mamba de la Furia as I roar SSSSSS-CHAH! with my wings spread like the spears of the hunting shark! The cheering and clapping is all for me, Gigi. So do not pretend it is for you like last time, OK?

I will write my farewell letter to the team on Monday night. Make sure you give a copy to everyone.

Remember, you were all rubbish before me, and to rubbish you will return when I leave.