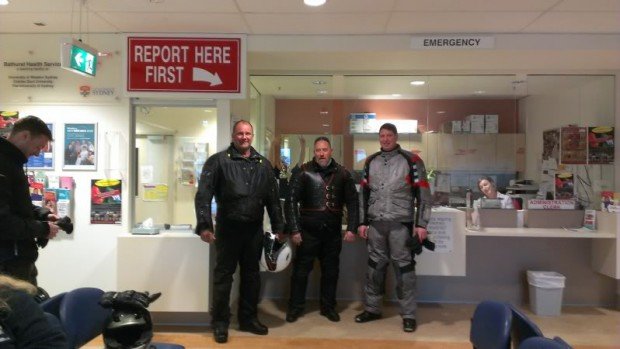 I hate telling my wife of my idiocy. I go to great lengths to avoid doing so. It is best that way. For everyone.

But especially for me.

Like when I recently embedded a beaut VROD into the side of a mum-taxi.

As I sat in the gutter being fed water and gentle condemnation by the local fire brigade, all of whom took turns gazing wide-eyed at my bloodstained radius and ulna peeking at them from the remains of my wrist, I got my phone out. They were about to cart me off to hospital and I needed to inform my wife about what was going on.

So I rang my son.

“Great. Look, I’m alright. I’ve had a bit of an accident. I think I might have broken my wrist, but I’m fine. They’re just gonna take me to hospital for a check-up. Could you let her know I’m fine and I’ll call her a bit later?” 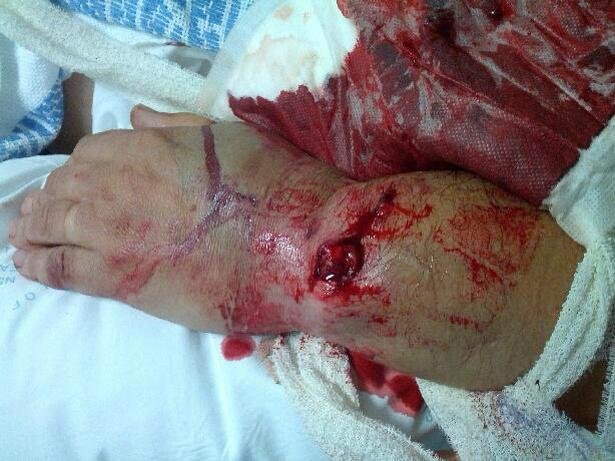 I was not exaggerating.

Then I rang my mate, Al.

“Al,” I puffed. “I’ve smashed myself to bastard buggery and back. There’s bones sticking out of my arm-meat and they think my neck’s broken. I will require lawyers, guns and money. The shit has hit the fan.”

Now I’d like you to note the difference between the two phone-calls.

I have no problems confessing my sins openly and honestly to my friends. But there are times when a full and detailed confession to the wife is counter-productive.

My mates are not my wife. They do not require a gentle, roundabout approach when being informed of a catastrophe. They need all the information, succinctly delivered, so that whatever action needs taking can be taken. Wives, by contrast, do not need all the grisly details force-fed to them in a teeth-clenching 30-second sound-bite. It is always better if they come to their knowledge gently and kindly and in the fullness of time.

I am not alone in understanding this.

Just the other week a kangaroo leapt into the side of my mate, Bluey, as he was hurtling down the Ilford-Sofala Grand Prix track. Bluey ended up with a hole in his arm from a broken mirror-stem and was sporting a nice neck-brace as the Sofala ambulance crew loaded him into their happy-van for transportation to Bathurst.

“Don’t tell my wife!” he shrieked from the gurney as another mate produced a phone and offered to call his missus. “She’s with the kids at the school musical. It’ll only wreck her evening. I’ll call her…um, tomorrow.” 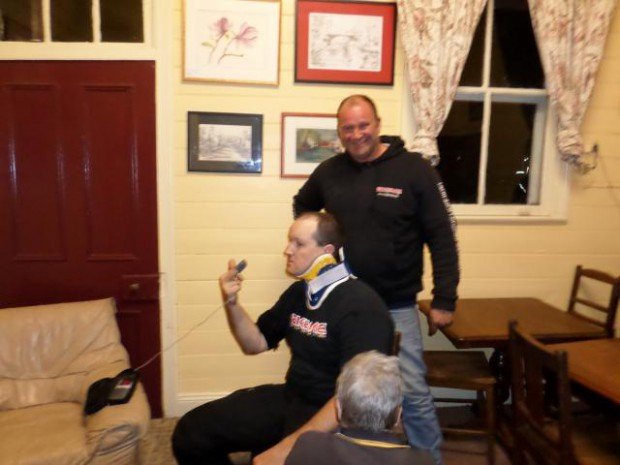 Pete and Bluey (seated) being ministered to in the Sofala pub.

I beamed with pride. Such self-sacrificing selflessness! Such a generosity of spirit! Here was a man who truly loved his woman.

Because that’s what it’s really all about.

If it is in our power, we will do anything we can to spare our wives any unnecessary anguish when we’ve messed up on the road.

If you can, make sure you’re the one making the phone call.

Stay conscious. Make the paramedics dial the number if you can’t. Keep your tone light and pleasant.

In terms of horribleness, if the cops call your wife to advise her of shit having happened, it’s as bad as it gets for her.

Right up there next to that call, is the hospital contacting next-of-kin to come and tell them to make arrangements with the local funeral home or wheelchair supplier.

It’s a little less horrible when a mate calls the wife and tells her you’ve been in a crash. And even if Pete’s internal organs are being gently pushed back into abdomen by the paramedics, his first words to her better bloody well be: “Hi, Tracey! Pete’s fine, he’s just had a bit of a spill and they’re going to take him to the hospital for check-up.”

And at the bottom-end of the awful-scale is when you yourself call Her Imperial Majesty and advise her that there has been a slight interruption to the program and that normal transmission shall resume shortly, and could she, if she has time, pop over to the hospital and maybe say “Hi!”.

So that’s what you need to aim for.

Of course there have been occasions, albeit rare, when I have left home on a bike and returned in a ute. Having self-diagnosed and established that hospitalisation was not required and that there was nothing going on that a few days on the couch couldn’t repair, I have found these to be the best in terms of wife-husband-motorcycle relationships.

The wife gets to vent her spleen at your failure to remain on the road and the massive inconvenience your subsequent convalescence will cause to the family paradigm, and then her instincts will kick in and she will nurse you back to health with the selfless devotion you would expect.

But make no mistake. That spleen-venting is vital for her. She simply has to tell you what a spastic you are. After all, she is massively relieved that you’re alive and not maimed, and because she is a woman, this relief will manifest itself in her telling you what an atrocious dickwad you are for falling off your bike. She’ll wipe your arse and change your pus-filled dressings later. But she first has to express her relief that you’re alive and that she doesn’t need to sign up to e-Harmony or go trawling through nightclubs in a short skirt.

And then there’s the whole Brownie Points situation. Following your accident, you are now deep in the red. It matters not that you may well have been high into the black before your get-off. The second the steel kissed the tarmac and you floppy-dolled yourself into Casualty, your Brownie Points were flushed down the shitter and off her perpetual scorecard.

It’s how this shit works.

And I’m not sure I’d have it any other way, quite frankly.