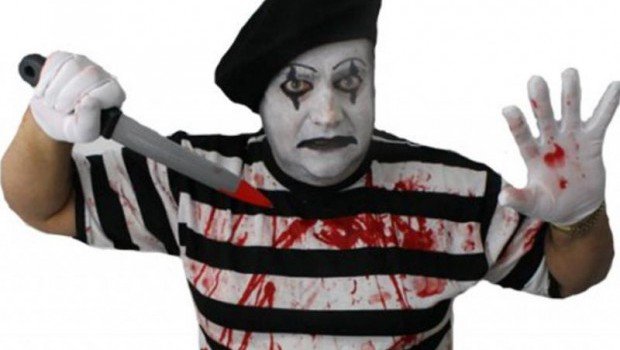 It was Open Night at the school, where the various faculties demonstrated their facility for the benefit of potential new students. My daughter was in one of the demonstrations.

I was late. A work emergency had kept me back, and when I was trying to make up time on the way there, two learner drivers got in my way when I took a shortcut. It was a hot evening. I was wearing a vented jacket, but it’s black and absorbs heat; and I was sweating like a whore at Mass when I arrived at the school.

My wife was there in the school hall, and a new teacher was asking if he could help her. She explained that she was the mother of one of the girls in the demonstrations.

”May not be the one to discover a cure for AIDS”, I chimed in.

The teacher looked at me as if I was a sweaty-jacketed helmet-carrying tool of the patriarchal oppressors. I decided I would try to put him at ease.

There were banners on the wall containing the names of the school houses. One was “Browning”. I gestured at it. “Ah, Browning”, I said. “Named after John Moses, I presume.”

“Barrett, you say?” I replied. “I think I fired one of her fifty cals once. Sweet piece.”

He excused himself. To get a glass of water, he said.

A small orchestra started playing down the front. There were maybe fifty people sitting near them. We took the Rosa Parks seats. They played a jazz number. The Chinese chicks that did the solos played like they were in pain. I wondered if their families still bound their feet.

Then there was a dance number. They wore black, and danced against a black background. It was called “When We First Met”. I would have called it “Walkabout in Coal Mine”.

Then my daughter danced the cha-cha, and the fifty people down the front left to go to the next exhibit. Another fifty came in and sat down, and the whole thing started again.

They did this six times, and I pulled my smartphone out and used its web browser to look for light coloured vented jackets that would reflect the heat of the Global Warming. It appears Dririder make a suitable garment.

We went to dinner at Tokyo Loco afterwards. I took my bike, and they took the bus, which was good because I had time for a quiet beer at an outdoor café while I was waiting. I told my daughter over the donburi that I had arrived late, but I was glad that I got to see all six of her performances. She asked why I was late.

I told her I was kidnapped by mimes on the way, and they kept me prisoner and did things to me, and it took a while to escape.

She looked interested. “What sort of things did they do to you?” she asked.

I drained the last of my Asahi Super Dry, and met her gaze.