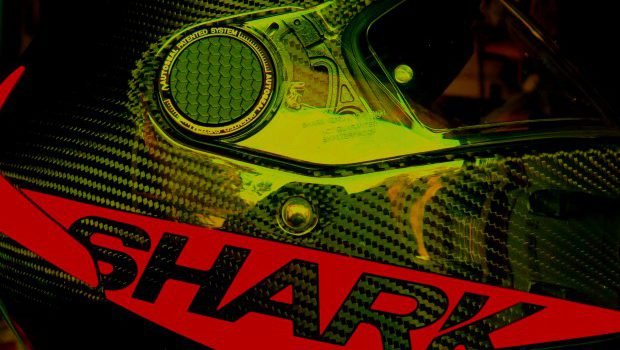 I’m not, as you may know, a fan of full-face helmets. And giving me one to test complicates my life in many ways.

Firstly, I find myself having to actually look after the lid. It’s new, it’s pretty and shiny, and at some stage it has to be photographed, so I nurse it like one of those gumbies who carry their lids around in soft bags.

And this gets on my tits. 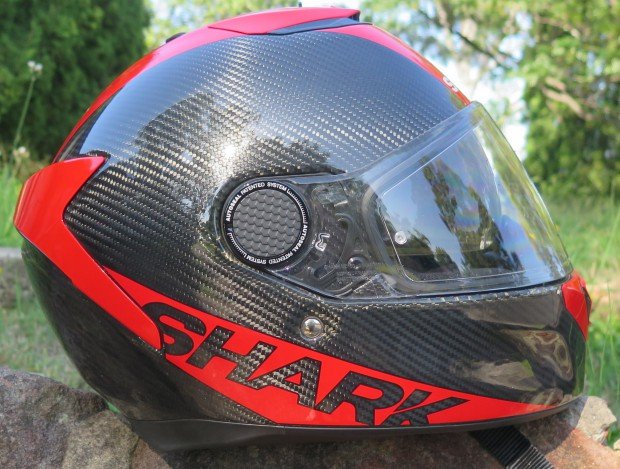 Secondly, I can no longer just leave it on my bike for hours while I drink my life away in houses of ill-repute. No-one would ever think of stealing my old open-face, but this shiny carbon-and-war-red unit? Man, the gypsies would be on this like seagulls.

So those are my First World full-face problems.

The lid itself is sensational. 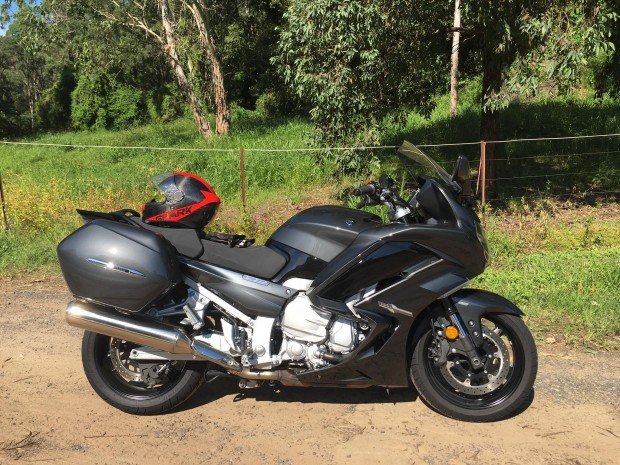 It’s light, weighing in at some 1300gm and is a composite of fibreglass and carbon-fibre. And you really can’t beat light for a helmet. The lighter the better, every time.

It comes Pinlock Maxvision ready with a Pinlock Maxvision visor included, and I am rather infatuated with its internal slip-down tinted visor. A lot of lids have them these days, and they’re a good thing if done right, obviating the need to replace your tinted visor with a clear one when you’re continuing to ride into the night. 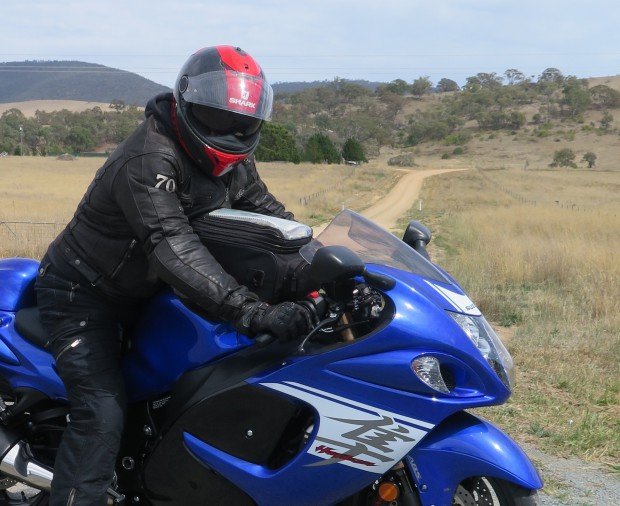 It doesn’t match the Hayabusa (but what does?), but this is what it looks like with the internal visor down. 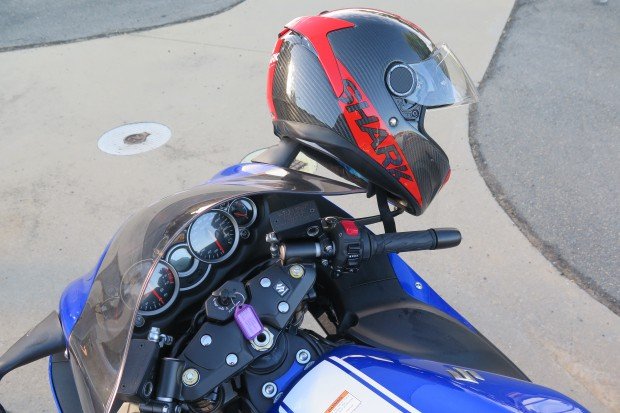 Apparently, you shouldn’t sit your helmet on your mirrors. It summons bad spirits or something.

The one on the Spartan is operated by slider on top of the helmet, comes down all the way across the opening, and does not sit on my nose. And I can also ride around with just the tinted visor down and the external clear one raised. Sure, there’s a bit of whistling going on, as you would expect, but around town it’s fine. Lots of air, but still great eye-protection, and I can scratch away at my face as much as I like.

But once the speeds rise, the Spartan comes into its own. The visor clicks down and the almost-silence is quite welcome. Yes, this is a quiet lid for me. Your head might be shaped like an eggplant and you might have issues, but I did not.

It’s got good venting on top of the helmet and on the chin-piece and you can actually feel the air being fed into the lid and onto your head. 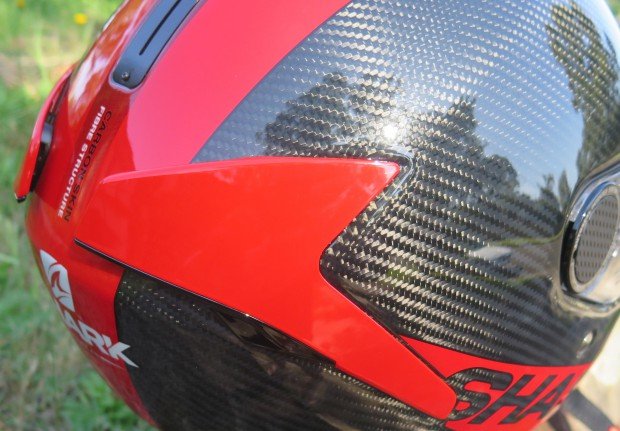 Sexy spoilery things. Air comes out underneath them.

It also has two cool spoiler-thingies on the back and while I have no way of establishing if they actually provide any downforce, I have seen some very speedy speeds with this on my head and there was no lift or vibration.

I used it in pouring rain on a mad run up the Putty at a goodly rate of knots and found it didn’t leak. 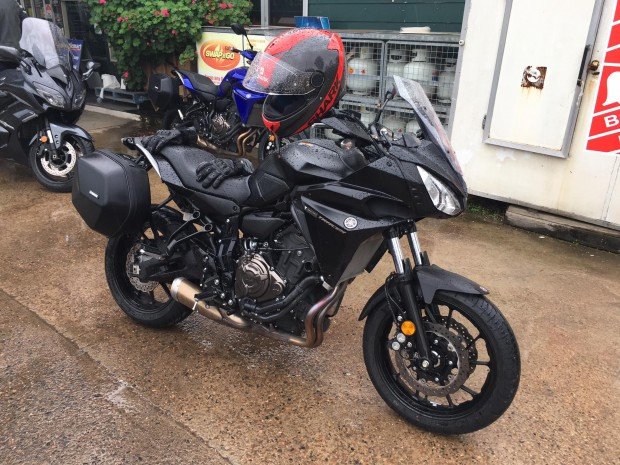 Here it is being water-tested.

I also banged it to the Tumbarumba TT, firing it to Thredbo and back, and then home. I almost crash-tested it when I hurriedly pulled over to take a leak and realised I was traveling a bit faster than I should have been in relation to the cliff I was headed towards.

I came to like it very much on those trips. It didn’t annoy me and I didn’t want to heave it into a field – something I have been known to do in the past. It came off my head with ease, went on with ease, and sat snug without pushing on my skull-bones.

In the interests of a comprehensive test, I have even worn it around town and in Peak Hour traffic, where I found it impeded my ability to scream abuse at drivers and chain-smoke durries.

I have now owned it for about three months and it doesn’t smell at all like a chamberpot, so I’m thinking the plush, washable interior is doing its sweat-wicking stuff quite well.

But most of all, I like it because it looks really cool – all carbon-fibrey and red (you can get in all-black and white-and-black), and I do pause to admire myself in shop windows from time to time. 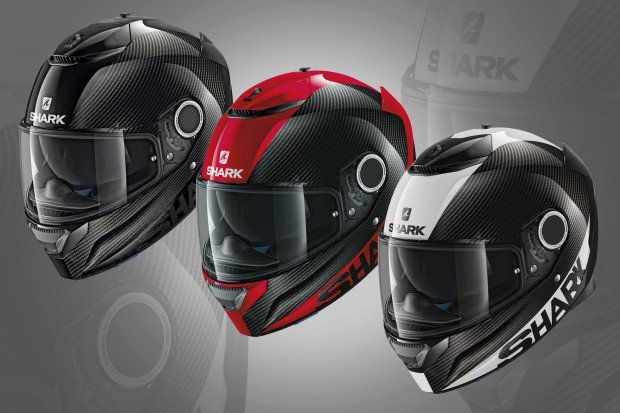 These are the three colours it comes in.

It’s also ready for you to install those infernal communications devices if that’s your thing, but I know nothing about that and probably never will.

WHERE CAN I GET IT FROM? Shark lids are easy to find, but if you’re struggling, contact Ficeda HERE.