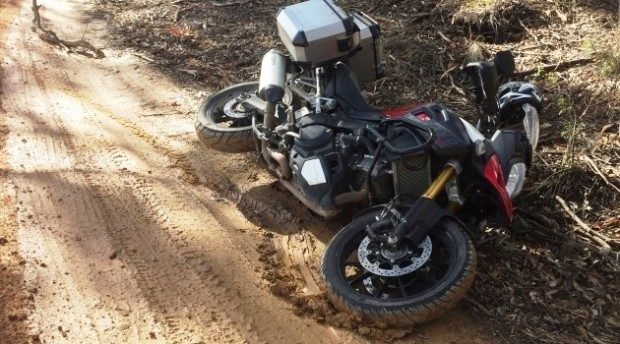 I went for a ride with Gonzo the weekend after the prince’s red-headed stepchild married the stripper. We stopped for lunch at the Gold and Fleece hotel at Windeyer. They ask your name when you order lunch there and I was going to be Max Power, but Gonzo ended up ordering and told them his name was Bill.

I didn’t get it either.

“Come to Ben’s with me on the ninth”, I urged him. “We will drink whiskey and shoot kangaroos. Ben says the place over the road is over-run. He shot twenty three the night before last and thirteen last night.”

Gonzo said sorry, and he’d love to, but he’d accidentally bought a Volvo on the Internet and had to fly to Townsville to pick it up.

“That was very careless of you”, I admonished him.

We had lunch, and I split my front tyre on the dirt roads on the way home. We tried to patch it and with two plugs in it I managed to ride it a while, but it didn’t hold and I left it outside the bike shop at Lithgow. Gonzo doubled me home on his CB1300.

I got the bike shop to put a new tyre on it, and went up by train to pick it up the next Friday. The train fare was eight dollars fifty. It was outrageous. They didn’t even have a bar.

I went to Ben’s the weekend after that. It had been drizzling rain for four days and the road was pretty slick in the clay sections. On one of them I headed for the dry stuff on the left because the road turned and I didn’t want to collide head-on with something coming the other way. There was some dead tree in the way which made the angle a bit sharper than I liked, and I lost the front when the tyre tread filled up with wet clay.

The bike fell over. It was really slippery, and I couldn’t pick it up. Petrol started pouring out of the breather tube. I had mobile phone reception, just, and I called Ben. I was only a kilometre or so from his place. He came down in the 4-runner with young Tyson from up the road.

Young Tyson was sixteen. He had a Yamaha trail bike. He looked at my bike. “Nice bike”, he said. He looked at the clay and the front tyre. “That tyre”, he said, and snickered.

“How’s your adventure working out then?” asked Ben.

They got the bike up. I rode it to Ben’s. “That was hilarious watching the front wheel in my mirror when you were steering out the front end slides”, he said when we got there.

We had dinner and mounted the spotlight on the 4-runner and got the rifles. Ben made us all swear not to shoot each other, and we went hunting. Ben had the radio tuned to the only station you can get out there, 2JJJ.  They had a feminist academic on talking about the problem of “incels”. She said it was caused by men who regarded women as vending machines into which you could insert “kindness tokens” and sex would come out.

We howled with laughter. Admittedly, we’d been drinking.

“There’s a roo” said Tyson, who hadn’t been drinking and was manning the spotlight.

“Put a kindness token in his head, Al”, said Ben.

You had to be there, I guess. We shot kangaroos for an hour. Then we went back to Ben’s place and poisoned ourselves with American whisky.

It was a severe poisoning. I wasn’t up to riding until midday the next day. Ben followed me to Sallys Flat in the car in case I crashed again. I didn’t, but it was still pretty slippery.

There was a ten kilometre traffic jam outside Lithgow. I didn’t want to lane split with the panniers on, so I made a U-turn outside the prison and detoured via Rydal.

I rode into the car park under my apartment around 17:00. The guy from upstairs was cleaning out his garage and had a pile of junk outside. “Hi Al”, he greeted me. “Where have you been?”

“Out west”, I told him. I gave him the salient points. “Crashed on clay. Shot some ‘roos.”

He checked out my bike. “No damage”, he said.

“That vacuum cleaner broken?”  I asked.