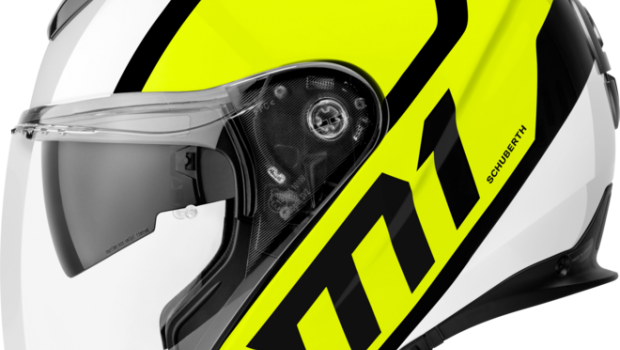 My brother Alice summed this helmet up perfectly after hearing me rave about it.

“It sounds like a helmet for people who hate helmets,” he said.

I will explain why in a second, but there’s a few things you have to know first.

So firstly, thanks to the rationalisation of Australian helmet laws, you will shortly be able to buy Schuberth helmets in this country rather than ordering them on the Internet and hoping for the best. The first container is already on its way.

Secondly, before you buy your next helmet, you really should look long and hard at these German-made marvels – for they are indeed both wholly made in Germany (Magdeburg) and utterly marvelous, and they deserve your attention.

I had long heard about Schuberth helmets.

It was some kind of mythical uber-helmet unavailable in Australia, but everything I read told me it was arguably one of the finest, if not the finest helmet in the world.

It was only available in Europe and the USA, but I was intrigued by the brand, so I looked deeper… 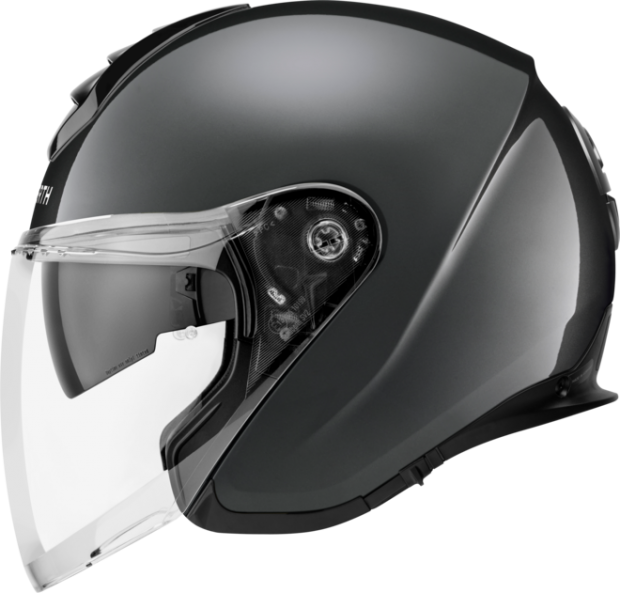 It has all the benefits of both an open-face and a full-face.

I saw Schuberth had been making helmets since 1929. The company began in 1922 and was a joinery that made beer crates. It was run by Fritz Schuberth, who also happened to be director of the national Jürgens Brewery, so I was immediately pleased to know beer was involved in its history.

And it is a history rich with milestones.

Schuberth entered the helmet business in 1929 when it patented a leather inner-liner for military helmets. It created its first industrial safety helmet in 1952 and its first motorcycle helmet, the Aero, in 1954.

In 1976 it made its first full-face helmet and in 1979 it made a patent application for its one-handed-operation flip-up visor. In 1986, two things happened – the first was Schuberth became the first helmet manufacturer to use a wind-tunnel in its helmet-construction process, and the second was it invented a new ventilation system with an advanceable visor that prevented insects entering the helmet.

In 1998, Schuberth debuted the flip-up helmet concept at INTERMOT and was also the first helmet to get both DOT and ECE approval. Two years later, it entered Formula 1 racing on the head of Nick Heidfeld. The following year, there was one on the head of Michael Schumacher, who wore a Schuberth lid for each of the five championships he won driving for Ferrari.

In 2014, Schuberth purchased the Italian fabric and carbon specialist, Teca25, and the following year it became the exclusive helmet for all the competitors in the Red Bull Rookies Cup. The same year, Schuberth developed an entirely carbon-fibre helmet in co-operation with the Mercedes AMG Petronas Formula 1 team.

In 2016 Schuberth premiered its invisible communication system, the SC1 (Schuberth lids have all their comms inside the actual helmet), which it had developed in conjunction with Sena. And in 2017, for the 12th time in a row, Schuberth took out Motorrad magazine’s Best Brand award in the Helmet category. Also, this was the year Schuberth introduced the SF1 Pro, the lightest helmet in the world of car racing, and more importantly, this was the year it gave me a helmet to try… 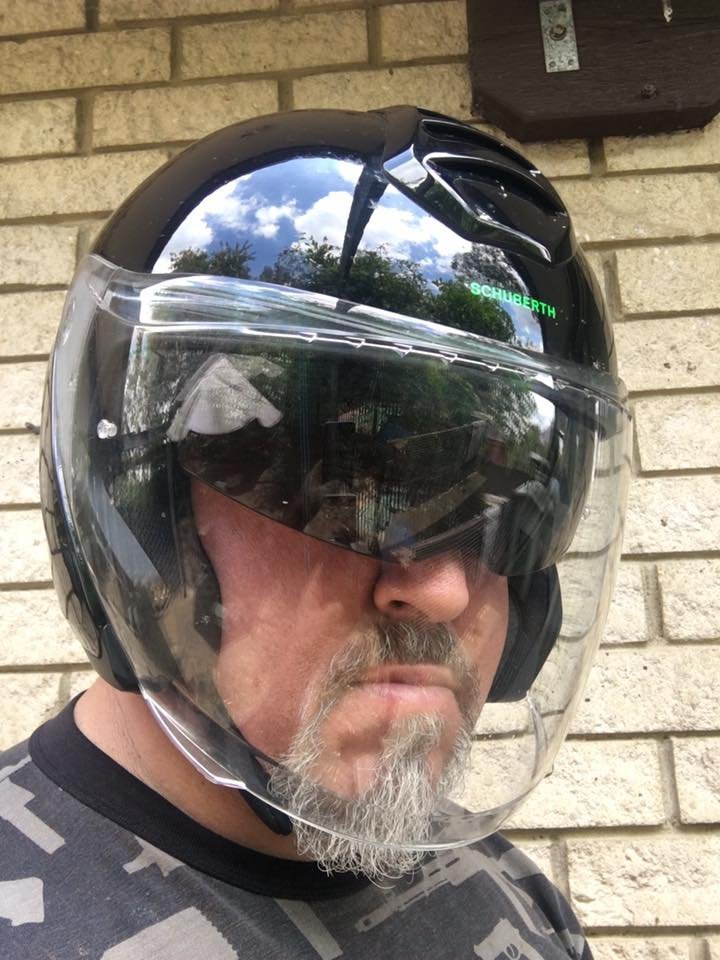 Both external and internal visors deployed. 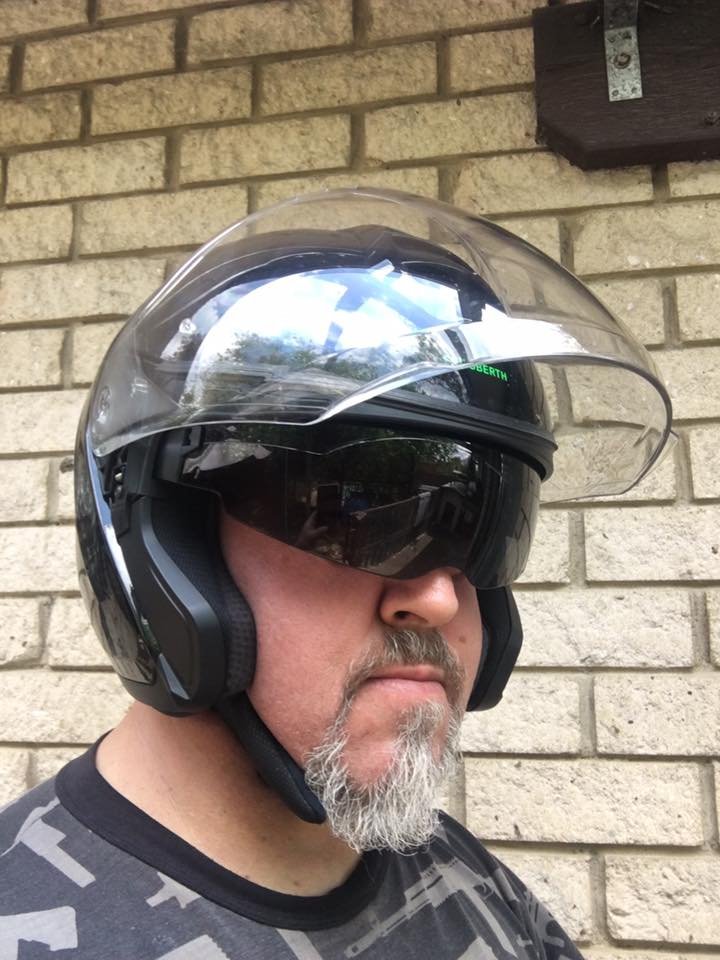 Just the internal visor down. But even when that external visor is up, there is no lift and no buffeting. Aerodynamics, bitches. 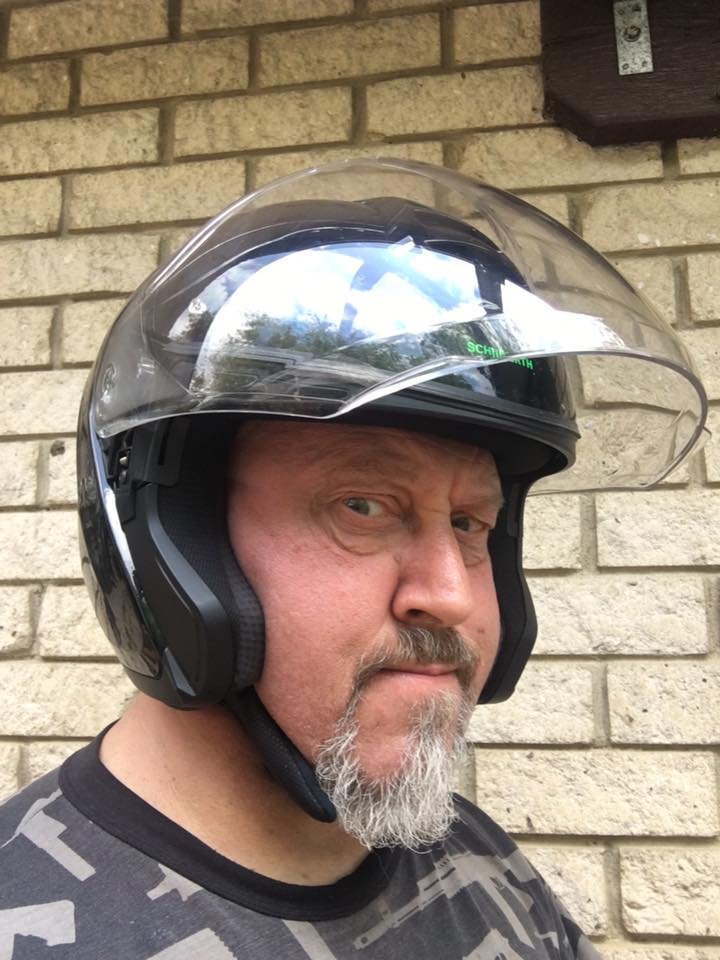 Both up. And you can wear sunnies or prescription glasses, no worries. I’m not wearing any, so you can see the pain and suffering in my blue eyes. Not from the helmet, of course. Just in general.

SO ABOUT THE M1

Behold the M1. The helmet you wear if you hate helmets, and I surely do hate them. Actually, I hate being made to wear them more than I hate the actual helmet – after all, they have saved my life once or twice.

But surely if you have to wear a helmet, you would choose a lid that is the epitome of comfort, protection and practicality? Of course you would.

And while I will eventually review a full-face lid, I prefer open-face helmets (for lots of reasons), and this Schuberth M1 is the best open-face I have ever worn. And I have worn them all.

Here is why it is the best, and no, it’s not the colour. I don’t always get to choose the colour of the lids I try.

Touch it like you’d touch your girlfriend when she’s got her play-undies on. Feel it. The quality of its finish is second-to-none. This is a top-quality bit of gear, both inside and out.

It fits properly and sits right where it should sit on my head, ie. Low on my forehead and high above the base of my skull so it cannot snap my neck in a crash. 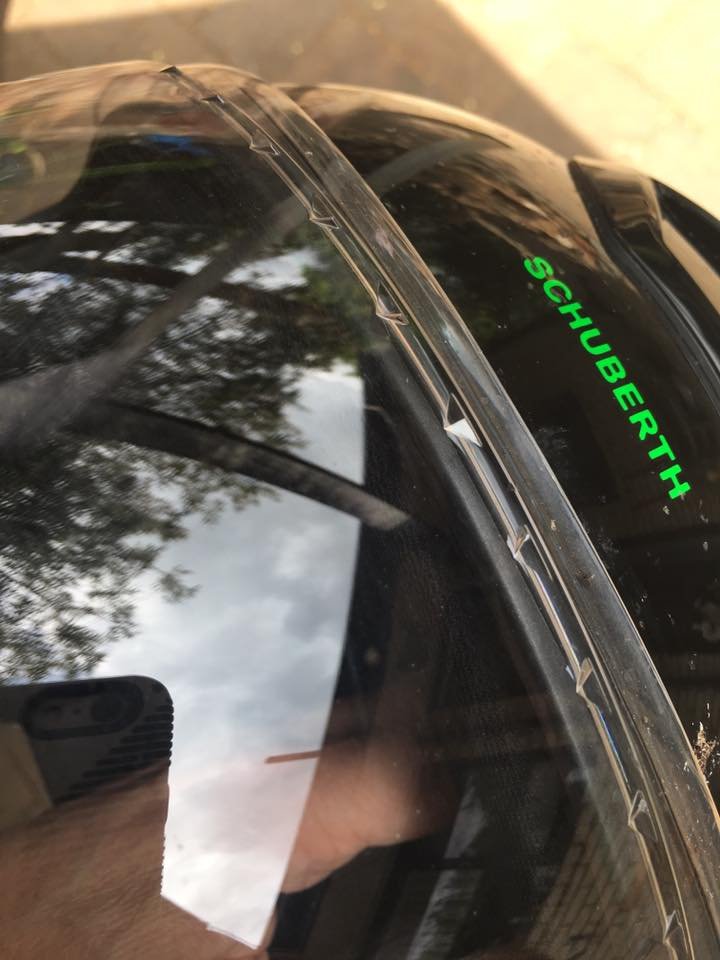 See the little triangular carbuncles? They are the wind deflectors. And that’s a bug I killed the other day.

It comes ready to be fitted with internal communications. Yes. Internal communications. Like the Germans would make something that would hang off the side of your lid like a tumour. Nope. Everything is already inside the lid. Speakers, mic, the lot. All you need to do is add Schuberth’s SRC communications system. Which you can of course then swap from lid to lid if you have more than one Schuberth helmet.

The M1 fastens with a ratchet strap, which I very much prefer over the traditional double D-ring set-up. Super easy and fast to get on and off.

The insane clear visor is insane. Fully dropped, it’s almost like wearing a full-face helmet. Your entire face is protected from rocks, bugs, birds, and flying truck tyres. You’ll also notice the strange array of carbuncles on the visor’s top edge. These are wind diffusers. This means the helmet does not lift. Even when the visor is fully up, it does not lift. This did my head in. I tried riding with visors a while back and when you put them up as you’re riding, the wind gets under it and threatens to tear your head off. Not this one. If it’s fully up, you can still belt along at 140-160 and it feels like it’s not there. You can even turn your head. The combination of wind diffusers and clever wind-tunnel design is just so evident in the visor alone, never mind the rest of the helmet. 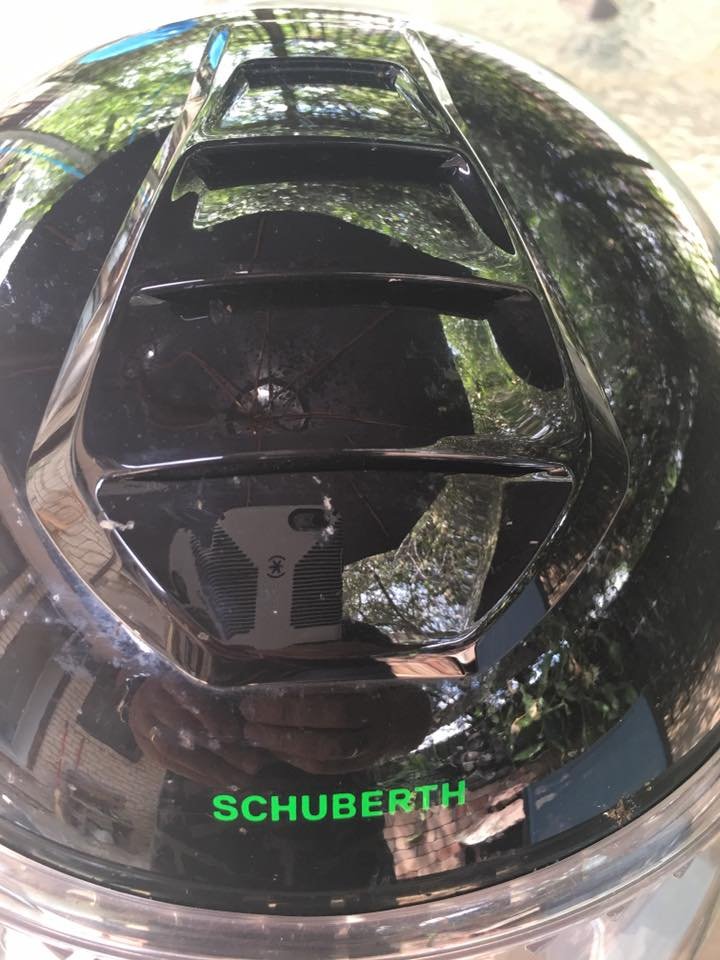 This sucks in all the air in the world and provides a constant air-flow throughout the helmet. But water doesn’t get in. 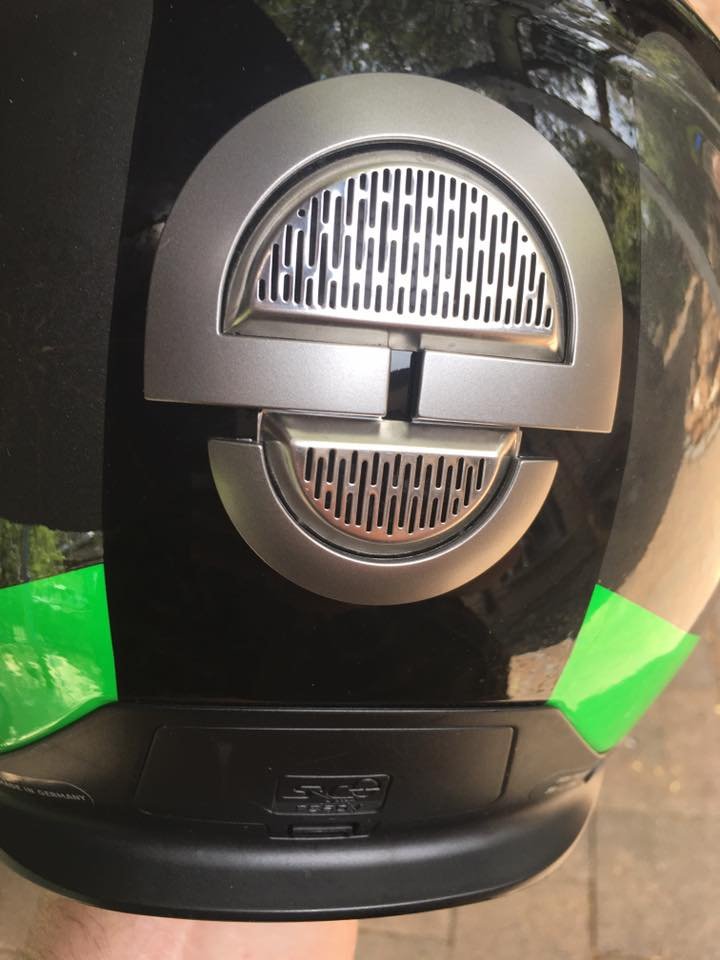 This is the exhaust vent at the back of the helmet. It sucks the evil spirits out.

And the visor is magnificent from a vision standpoint too. It is made of thick, injection-moulded, and entirely scratch-proof polycarbonate. It’s classed as Optical Class One, which is the best there is. There is no distortion, even if the visor is half-raised and you’re looking through it at an angle, things still look perfectly normal.

The external visor is Pinlock ready and available in four tints apart from clear. And you can get a titanium peak or a black peak if you want a peak.

The helmet also has in internal tinted visor that drops down via a button on the side of the helmet. I found this to be the only iffy thing. The only way to deploy the internal visor is via the button. But you also have to use the button to to raise it. Failure to use the button to raise the visor will cause the wires that do the job to have a shit-fit. So do not push it up with your fingers. It’s a small thing, but it’s important to remember to do this. You can get this drop-down visor in five different tints and you need no tools to change it out. 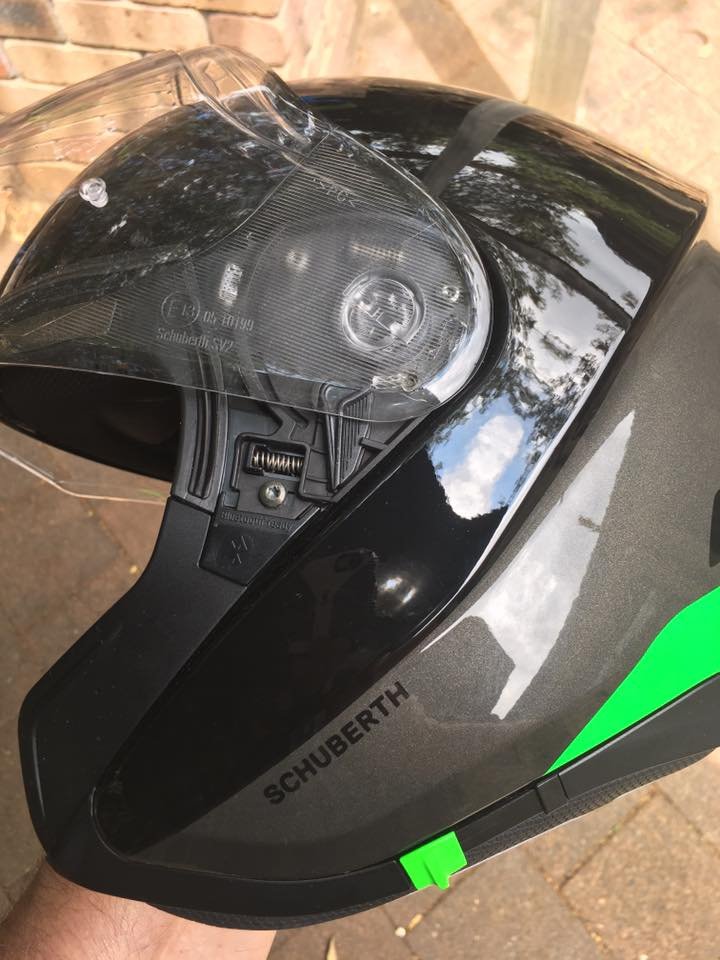 Visor action is smooth, not notched and feels very solid. the visor seems to ‘lock’in place whatever angle you put it on. No, I do not know why it works. It just does. It might have something to do with the spring. And there’s that green button to deploy the drop-down tinted visor. You must use it.

The ventilation is crazy good and it is constant. At times it feels like you’re not wearing a helmet thanks to the amount of air being fed into the big vent at the crown, and siphoned out via the silver grill-vent at the back. I rode in the rain and no water came in, so that can only be sorcery. I don’t know. Water should have come in the vents. But it didn’t. So sorcery. Oh, and you can choose from a black vent or a grey-coloured vent.

Yes, the lining can be removed and washed. But the lining is entirely seamless and consists of five ergonomically-formed cushions. The lining breathes and is antibacterial, and you can get it in grey, or a tan colour if you have a special beard and like to wear girl-pants. 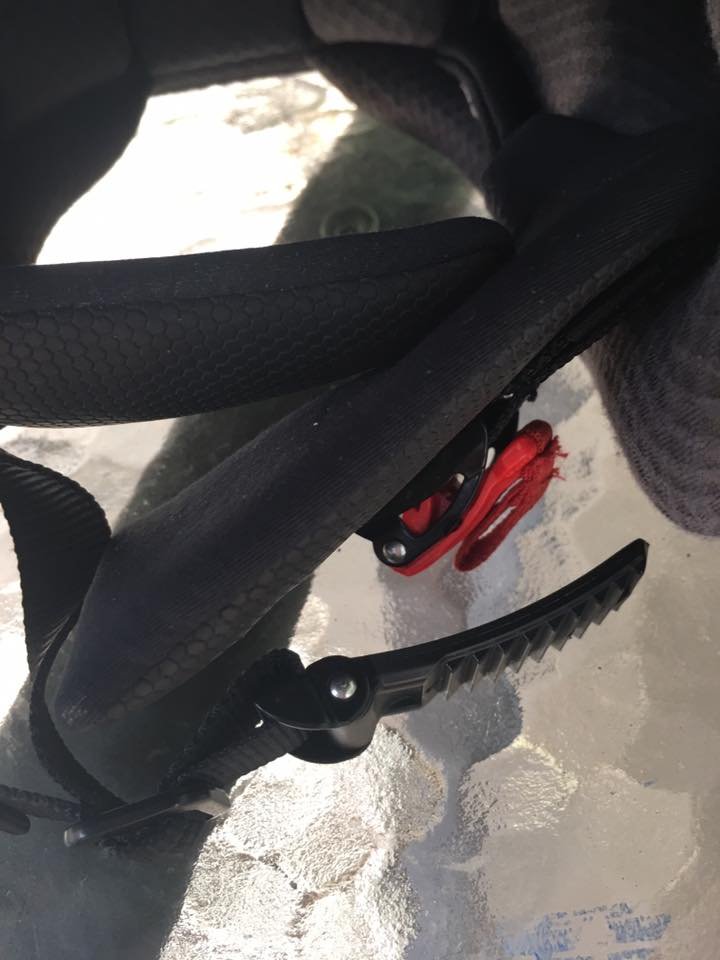 The ratchet-fastening system. Works sort of like a seat belt. 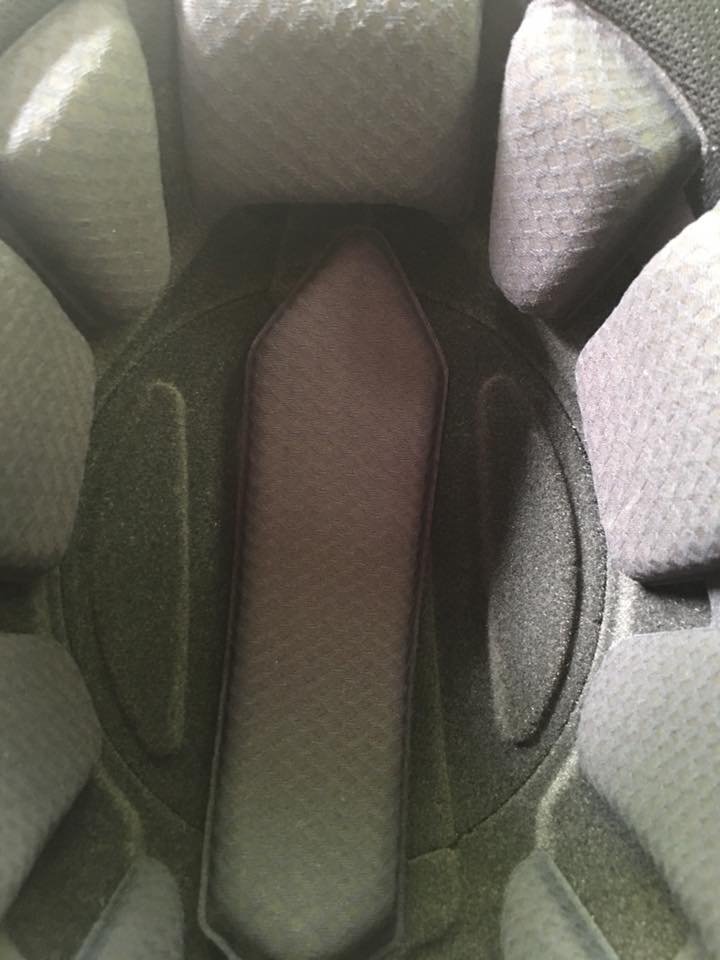 The inside is luscious and seam-free.

Is it quiet? Weirdly, yes. As much as an open-face can be quiet, this one certainly is. In fact, with the visor down, it’s quieter than some full-face lids I have worn. With the visor up, there is wind noise, but less than you would get with a normal open-face. Makes me wonder how silent the Schuberth full-faces are.

Yes, it is glasses-friendly and I wore sunnies most of the time I had it on my head. But I also tried it without the sunnies and was very pleased with how little air was blasted into my contact-lens-filled eyes when both the visors were deployed, or just either one. 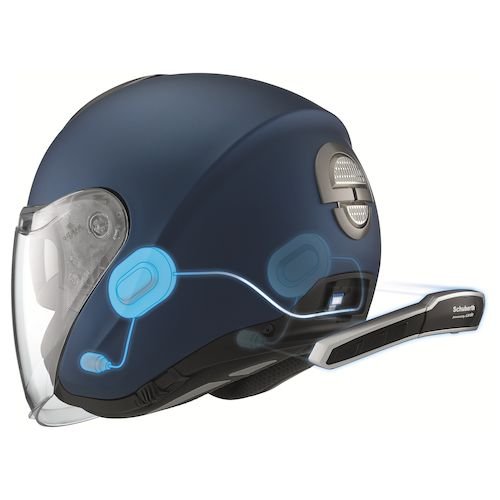 And finally, there’s the weight of the thing, or lack thereof. The external shell is some resin-impregnated fibreglass caper that weighs in at 1350gm, give or take 50gm. That is seriously light for a helmet with two visors, and that’s down to it’s unique Direct Fibre Processing construction method, which you can explore HERE.

I have now done about 2500km in the Schuberth M1. In the rain, at high speed, and commuting around town. There’s no doubt in my mind. This is the best open-face helmet on earth.

WHERE CAN I GET IT FROM? Nowhere, just yet. But very shortly, Schuberth helmets will be available from Procycles in Sydney and Andy Strapz in Melbourne. More retailers will be coming on board as time goes on. Feel free to come to the Sydney Motorcycle Show (Nov 24 -26) at Darling Harbour, and see the whole range of Schuberth lids. For the moment, you can register your interest on Schuberth Australia’s Facebook page HERE.