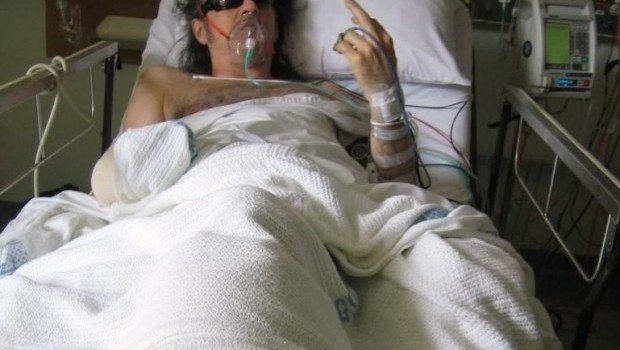 I arrived last night as he was being wheeled out.

“No worries”, said the orderly. “We’re taking him down for a cat scan. Come along.”

I have ridden many miles with Bly, and never suspected he may be full of cats. I got in the lift with him and three orderlies and my daughter. He took up the most room. He said hello to us both.

We went down one floor, and the orderlies conferred with this stunner of a blonde health care worker, and then they pushed him in to a sort of annex or grotto.

“So”, I said. “Pub lunch, morphine, helicopter ride. Can life get better?”

“Didn’t get a bloody window seat, but”, said Bly. I don’t know where he gets this ‘but’ at the end of sentences thing. Probably from his trips to New Zealand. Or maybe he’s one of the few people who read Benelli Bob’s posts on the forum.

“Anything I can get for you?”, I asked. He absently clicked on his morphine release thingo.

“Nothing wrong with that one a minute ago”, I said.

“Make sure they’ve got pictures”, he said.

I hope he IS full of cats. I’ve got something in .22 WMR that really helps. And I’m all about helping, me.