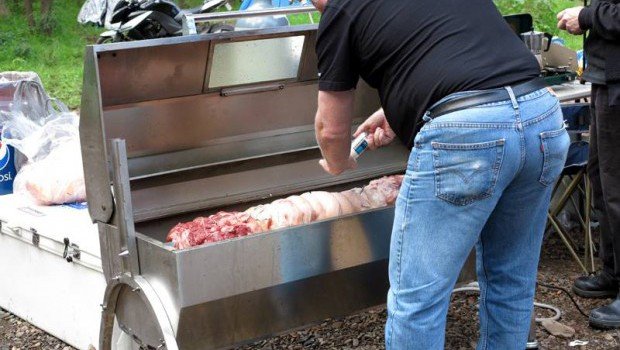 I rode with half a dozen others to the Capertee pub, where we waited for a batch of Victorians to arrive. It rained a little, and the roads were wet. I purchased some warming fluids, and stepped outside. Stiv asked me what I was drinking. I told him it was Glen Moray.

“What is this Glen Moray?” he asked.

“It is whisky made from eels”, I told him.

He went inside to buy some. Serbs. They’ll drink anything.

I left before the others, and rode to Sofala alone. The weather cleared, and the roads were dry from Ilford on. I went into the pub at Sofala, gave a couple of hundred to the barmaid, and told her that anyone in motorcycle gear should drink free until it ran out.

I had a couple of beers and greeted arrivals. I told Canning that the Turondale Road was a fabulous piece of swervery and nearby, and he should go home that way. He said he had other plans for his homeward trip, so he left to ride it forthwith. I rode out to the camp site and pitched my tent.

There were kegs of beer. We drank. Two large fires were lit. I greeted more arrivals. One was Canning. He agreed that the Turondale road was as advertised. Rob showed me the lamb cooking on the spit. It got dark. Rob bellowed the dinner invitations.

Rob’s invitations are Anglo-Saxon, bawdy, profane and scatological. He eschews the use of five letter words, unless he is indicating the plural. We ate lamb on bread rolls, and drank more beer. We sat around the campfires and told stories. Some fireworks went off, courtesy of one of the out-of-state arrivals. I asked him if they were legal in his state. He rolled his eyes.

It rained a little overnight. I slept well. We were woken by Boris calling Azan. “Allāhu akbar, Allāhu akbar”, he bellowed. “Ash-hadu an-lā ilāha illā allāh!” We kicked the fires into life, and Rob started cooking bacon and bumnuts.

Gonzo had arrived earlier. His Ténéré was badly damaged, and possibly a write-off. He said he had worked a late shift, left Sydney at 0200, and hit a kangaroo near Ilford around 0330. He hadn’t fallen off. He showed us photos of the dead ‘roo. He had some of the contents of its intestines on his boot. 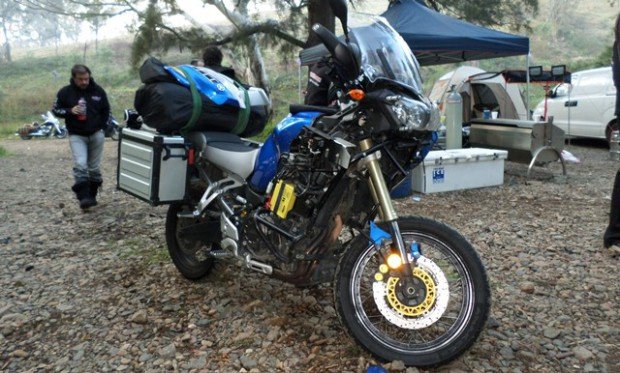 Gonzo killed the ‘roo without dismounting, but there was some battle damage.

We went into town. The pub opened at 1100. We had a few beers, and inspected the track in preparation for some street racing.

The Pilgrimage Slow Race is run for the length of the pub. It is run in pairs. The last person to the finish line who has not touched a foot to the ground wins. 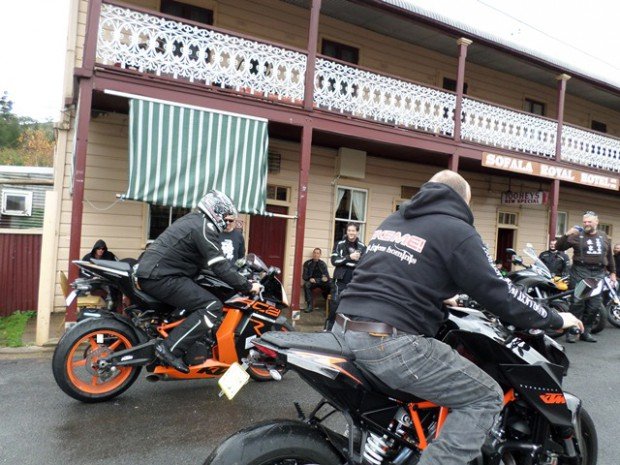 We went back to the camp site at 1300. There were Feats of Strength, involving speed, momentum, crashing, bunjee cords and a jumping castle. Swifty won. There may have been some cheating. 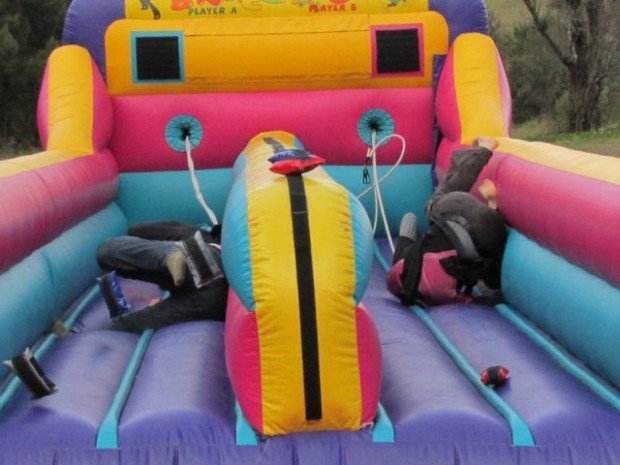 There were Feats of Strength

I took a few Victorians out around 1445 to show them the Bylong Valley Way. We rode to Bylong, continued east over the mountain past the railway bridge, then turned around and came back. It got dark on the Ilford road. ‘Roo time. Two or three guys passed me. I rode at close to the speed limit, and on the centre-line where I could. Three or four of the others followed me, doing the same thing.

I came over a hill to see the reflective piping on a jacket moving as its owner waved his arms up and down. At the bottom of the hill was a small bridge. Bly’s Streetfighter was on its side. The rider was on his hands and knees. He got into a sitting position against the side of the bridge as I stopped. It wasn’t Bly. He was dazed. His limbs looked straight, and I couldn’t see any blood. We asked him if he thought there was anything broken. He shook his head. He took his helmet off. It was Bluey. He had swapped bikes with Bly. He was in shock. I said it was triple-zero time. Canning said there was no mobile phone reception. A car stopped nearby. I told Canning to get some lights on: people go pretty fast along that road. Some guys started dragging the Streetfighter off the bridge. I left to go to the pub.

It was about ten kilometres. I rode there and called the ambulance. A few minutes later Bluey arrived. A truck had stopped to help, and he was on his feet, so they had decided to drive him in. There were paramedics in town, and the pub had an ambulance radio. The ambulance arrived about fifteen minutes later. They were nearby when they got the call, and didn’t have far to come.

One of the paramedics asked Bluey how old he was. He said forty-one. I told him the triple-zero operator had asked me on the phone how old he was, and I said about forty. Bluey said “Yesterday, you would have been right”.

They checked him out and said he would need a couple of stitches, and put him in the ambulance and drove him to Bathurst.

I went to the camp site. I had a late dinner. I told Gonzo he was better than Bluey at killing ‘roos. I told Bluey’s story around the campfires. It was repeated endlessly, like an episode of Midsomer Murders.

There was the traditional awarding of Teh Awesome. Teh Awesome is a shirt which bears the device of a wolf’s head, and is passed on at every Pilgrimage. One does not own Teh Awesome. One is merely its custodian until the next Pilgrimage. It went to Andrew from WA for reasons which I have trouble recollecting now that I am sober. 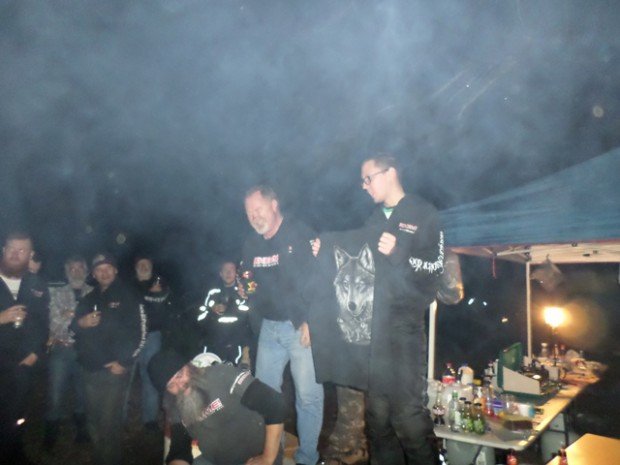 Teh Awesome was awarded.

More fireworks went off. We put about a metre and a half high of logs on the bottom camp fire. Harry was drunk, and his Indian blood started to assert itself. He insisted the fire needed some suttee. I told him I would go look for a widow. Sadly, I was lying to him. I went to my tent.

I disassembled my tent and packed my bike next morning, and queued for breakfast on hearing the Anglo-Saxon call. I ate. It started to rain. People started to leave.

It is traditional on Sunday mornings that some ride to Mount Panorama, each with half a brick, a toilet roll and a beer. They build a cairn from the bricks, surround it with blazing toilet rolls, and drink a toast to the old days. Some of the dinosaurs remember the old days. The younger ones have probably typed “Bathurst motorcycle race riots” into Google at some stage, and been pleased to find that they referred to probably the only race riots in history that contained a race track and no dusky chaps.

We skipped it. I rode home alone. I got wet. It was cold.

Still, an interesting way to spend a weekend. As previously noted, the alternative at my age, apparently, is golf.