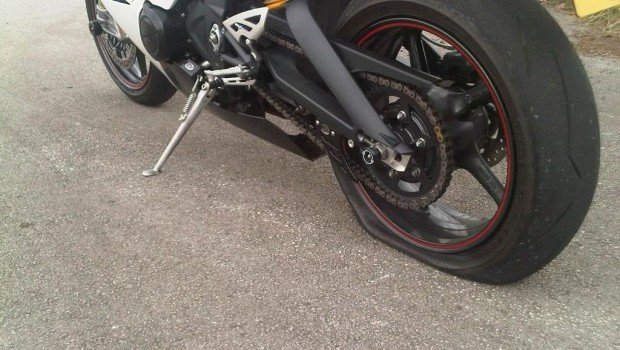 A few days before I was due to return the K1300S it told me it had a flat tyre. It’s electronically clever like that. I’m sure I would have worked it out for myself a few hundred metres down the road, but I was grateful its electronic brain discovered all was not in ordnung with the rear hoop.

No big deal, I figured. It’s just a flat. I am in the staff garage, and all of the vast and manifold resources of Australia’s finest motorcycle magazine are at my disposal. I have plugged dozens of tyres on the sides on dozens of roads, in conditions ranging from hellish to “Give me a lighter, I’m burning everything”, so an hour inside a nice shady garage in the middle of Australia’s biggest and beautest city was hardly gonna test me, was it?

So I walked the 50 metres from the bike to the stairs that lead to the basement lift foyer and went to see Shieldsy on Level 20.

“Here,” he said, tossing me a recently opened and thoroughly used tyre repair kit held together with duct tape. “You can fix it with that. I think the ADB blokes have a pump.”

“Thanks,” I said and went back to the basement, where I found the small screw that was slowly letting the air out of the rear tyre and pulled it out. All the air came out with it, which is normal and a road I have travelled before.

I reamed out the hole with the provided hole-reamer, affixed the gooey black tyre plug into the tyre-plug pusher-inner, and made ready to apply the rubber cement to the plug from one of the two well-flattened tubes, which is when everything started to go slowly, but irrevocably, to bastard hell.

Both tubes were empty. Mildly concerned why anyone would bother keeping empty tubes of rubber cement on hand, I hoped the gooey tyre plug and the freshly reamed hole would bond happily without the aid of the shit that should have been in the empty tubes, pushed it all into the hole, stared at the resultant umbilical protrusion fiercely, then went back upstairs to see about getting some air.

I approached one of the ADB guys and asked to borrow the pump Shieldsy had told me they possessed.
“We don’t have any pumps,” I was told.

Fair enough, I figured. Shieldsy was clearly being misled by the wholesale lies the dirtbike guys have been telling him about being the custodians of air pumps.

I then wandered off to see Justin, the editor of 4×4 magazine. I was still buoyant with hope. Professional four-wheel drivers are the boy scouts of the motoring world. They are prepared and equipped to winch and repair their vehicle after it has fallen into a lava-filled caldera full of melted mountains.

“Do you have an air-pumping thing I could borrow?” I asked Justin.

“It’s your lucky day,” he grinned. “We’re testing compressors. I have lots of them. See Tim, he’ll give you one.”

I saw Tim and he did indeed give me one â€“ a large one in a black box sporting a spectacular blue high-pressure superhose.

“Bikes have got 12volt batteries, don’t they?” he asked.

“You’ll need one to run that thing,” he smiled.

I lugged the compressor back to the basement and discovered that not only does the K1300S’s battery not live under the seat, but the blue superhose did not want to click into its place on the compressor. The former did not concern me all that much. A little searching and asking would soon reveal where the Beemer’s battery was hiding, and maybe I was doing something wrong trying to connect the hose to the compressor. I am mildly retarded and criminally impatient when it comes to mechanical things and it was possible my ham-fisted antics were responsible for the hose not clicking co-operatively onto the compressor.

I picked up the compressor and hauled it back upstairs (well, I could hardly leave it in the carpark, could I?) and found Rennie.

“Mate, could you give us a hand?” I pleaded. “I think I may be doing something wrong with this compressor thing.”

Being a kind and generous soul, Rennie immediately took pity upon me and agreed to assist.

“How’d you go?” Tim asked as we were walking out.

“You wouldn’t have a spare battery?” I joked, and was amazed when Tim grinned and produced a 30kg chunk of stored electrical anger that looked like it just came out of a Kenworth.

“It’s fully charged,” he said. “That should see you right.”

I gave Rennie the compressor box and grunted my way to the lift with the Lord of All Batteries mashing bruises into my thighs.

“Thanks for helping, mate,” I said to Rennie as we descended into the basement.

“No worries,” he shrugged. “It won’t take long, and it’s easier with two people.”

Or so one would have though.