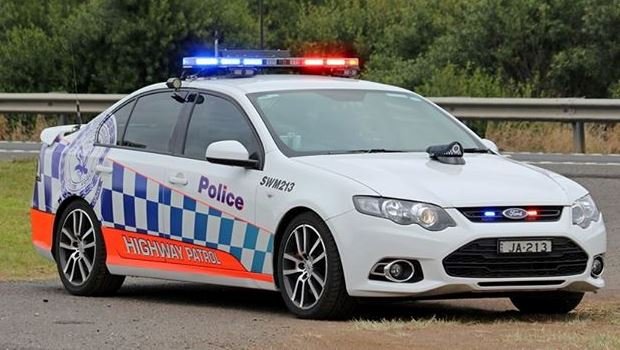 Three southbound Highway Patrol cars passed me on the way north, but it was raining and I was going slow. It was clear at Broke, and I was looking forward to riding the Bylong Valley Way on the way to visit Ben when I got the SMS about email not working.

My smartphone wasn’t picking up email, so I figured there might be something in it, and I turned around and rode back. The first cop was booking the pair on the Harley-Davidson that left Broke a few minutes before I did. The second one got me.

The road was empty except for me. Then he appeared, and lit up his lights. I gave him my licence and he asked me if I had drunk any alcohol today.

He asked me if I still lived at the address on my licence.

The third cop passed while mine was sitting in his car doing whatever they do sitting in their car. Then my cop gave me the bill for two hundred and fifty four dollars, told me I had something weeks to pay, and left, probably to go home and beat his wife or celebrate the job satisfaction that comes from being a tax collector with a gun working a river of gold.

It started to rain again when I left, and the fourth cop wasn’t interested in me. I rode back to the office in the rain, while doing the numbers on why the stapo would have four cars on the sixty kilometres of road between Freemans Waterhole and Broke. I knew the car cost around two hundred and seventy five a day in depreciation, and I knew the cop cost another two twenty or so, and I knew the cop got performance managed if he wrote less than twenty tickets a shift, and I knew from bitter experience that exceeding the speed limit by over ten was worth two fifty four. Two fifty four times twenty was five gorillas revenue, I figured; direct cost of maybe six hundred. I know people who would kill for margins like that.

Which explains why the NSW Police Force occasionally does, I guess.

I rode the hundred kilometres of rain back to the office and fixed the bad Internet connection. I called Ben and told him I would be late. I went direct west this time. The rain stopped half way over the mountains. I stopped at Kelso for gas, and called Ben and gave him an ETA. I rode the Turondale road north as dusk turned to night. There were lots of ‘roos and a young wombat, and it was dangerous and scary, but there was no percentage in that, and so of course there were no Highway Patrol there.

Ben met me where the road turned to dirt in his Toyota, and led the last twenty kilometres to beat a path through the fauna.

I survived. Past Bell on the Bells Line of Road, there was a woman on the outside of a blind right hander waving her arms. Shortly after was a pair of crashed cars. It looked like they had brushed sides where the passing lane stopped being the passing lane, only a few minutes ago. No-one seemed hurt. A couple of other cars had stopped. I figured everyone carries a phone these days, and the NSW Highway Patrol’s crack invoicing team would be arriving in minutes, so I didn’t stop.

I got home about 1400. It was Fathers Day. I was given presents, and taken to dinner at the Brazilian churrasco.

I ordered a steak. It was fabulous.

I ordered an Eisenbahn. It was fabulous, too.

I ordered another Eisenbahn, and drank a quiet toast to Roberto Laudisio Curti.