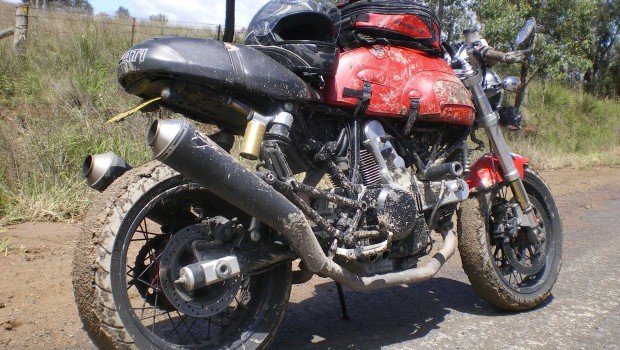 A couple of years ago I told Bly I was going hunting with my brother, and the Happy Hunting Grounds was near the end of the Bylong Valley Way, and I was leaving my place on my motorcycle Saturday at 0730. He said he was in.

It was a weird day. We encountered twenty or thirty of the Porsche Owners Club on the Wollombi Road, and carved them up like so much maguro.

A bit after Wollombi, we were on fast cruise and encountered a dirt section. There were five or six other bikes on it, and they had slowed to about 40km/h. We continued at fast cruise, and were in the middle of passing them when the one I was passing decided it was too bumpy for him, and he would ride on the right hand side of the road. He didn’t check his mirrors. I missed him by maybe a hundred millimetres.

He chased us. He arrived at the service station at Broke about a minute after we did, pulled up as we were filling our tanks, and started yelling about idiots that ride on dirt at a hundred miles an hour. I don’t know why he was raving about miles. The country has used the metric system since 1972. Maybe he was a foreigner. He was exaggerating, anyway. We wouldn’t have been going faster than eighty five of those old things.

Then he gathered up his skirts and disappeared in a huff. “What’s his problem?” asked Bly.

“He wanted to ride on the wrong side of the road, and he nearly had an accident, and it’s my fault”, I told him.

There were a couple of dirt sections on the Bylong Valley Way back then. We hit a freshly graded one after a brief but violent rainstorm. It was slick. I nearly dropped the VFR800 several times, and Bly DID drop the Ducati SportClassic. I couldn’t stop to help him because the stands wouldn’t hold the bike up, so I had to watch him mud-wrestling the sexy beast. We stopped when the road stopped being dirt and took a photo of Bly’s bike. 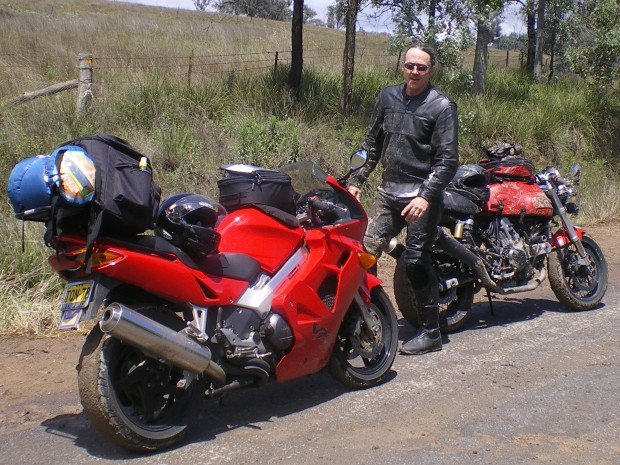 We stopped a little further along and took a photo of a crashed car, too, and everyone thought it was so hilarious that the Supreme Riding Soviet put it on the BIKE ME! calendar next year. 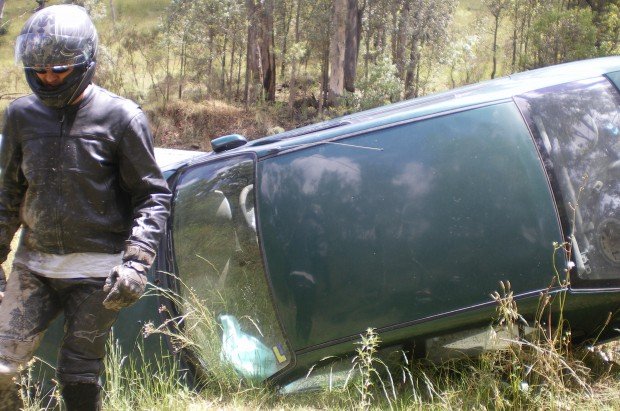 “Cut ME off, will you? Ford-driving faggot.”

Then a bee stung Bly on the neck. He said later it wasn’t the best day he’d ever had.

I farewelled Bly at the gate to the Happy Hunting Grounds, and entered and found my brother. I told him I was going to change, and then we should hunt. “Screw you, hippie”, said my brother. “I have your .308 here, and there are goats on that hill.”

So I rode off with him in his Toyota, and shot a nice goat, and towed it back and butchered it in my motorcycle pants. Then there was the whiskey to drink and the fire to light and the dinner to make in the camp oven and more whiskey to drink and a tent to pitch. In retrospect, I should have done that stuff in a slightly different order. 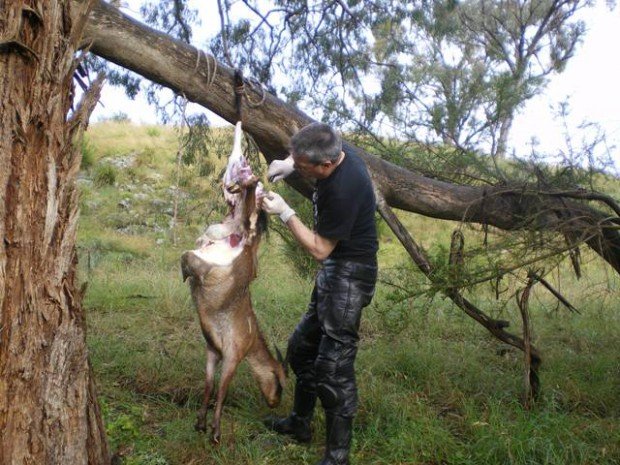 I left early the next day, and my hangover was pretty well under control by the time I hit the Bells Line of Road.

At work on Monday I was with people who could not comprehend that I might like to carve up the Porsche Owners Club and ride the Bylong Valley Way on a motorcycle and hunt for food and drink strong liquor when there were lots of guns around. They asked me what I did on the weekend. I told them it was a quiet one. They said theirs was too.

I went to my brother’s place the next Saturday morning and picked up a leg of my goat and cleaned and oiled my .308. I took the goat leg home and cooked it in the Weber with potatoes and pumpkin and kumera and served it with green beans and South Australian shiraz. It was good. I opened a second bottle.

At work on Monday I was with people who could not comprehend that I might like to cook feral goat that I had shot the previous weekend and drink strong Australian wines in amounts frowned upon by medical professionals . They asked me what I did on the weekend. I told them it was a quiet one.

They said theirs was too.