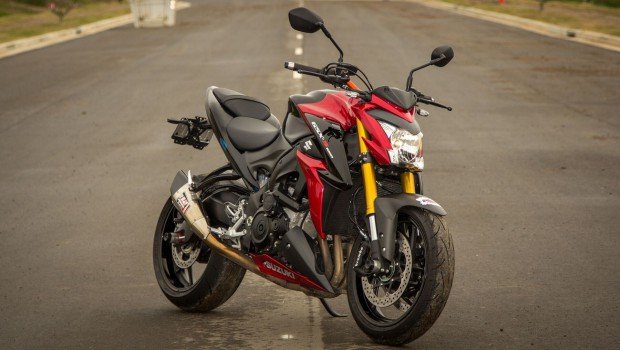 Once in a while, a special bike comes along.

A bike that re-defines my parameters.

Stupid parameters that now lie in a broken pile somewhere in the back of my yard where the weeds grow.

Worthless parameters which have been destroyed and redefined by the PTR Suzuki GSX-S1200. 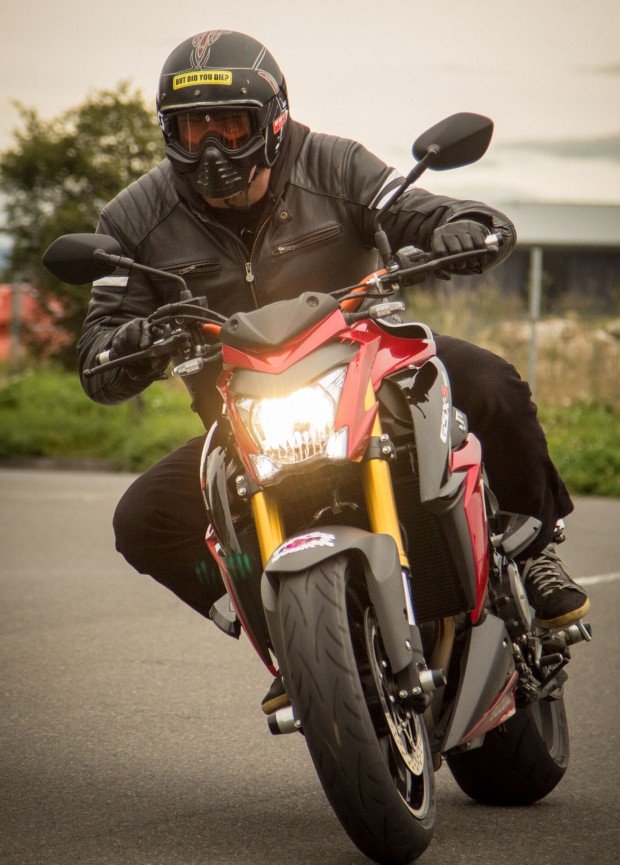 This is the first of them. And if there are any motorcyclists left on this earth, it will not be the last.

Many of you will know of Phil Tainton.

He has a facility at Wantirna South, a suburb of Melbourne. From within this facility (called PTR which stands for Phil Tainton Racing, but could just as easily stand for Perfectly Tuned Replicants or Piles of Tasty Rides), Phil takes normal motorcycles and…well, weaponises them.

He’s been doing this for the last 30 years.

Racing legends like Steve Martin, Grant Hodson, Troy Bayliss, Peter Goddard, Shawn Giles, Craig Coxhell, Josh Waters, Troy Herfross, Matt Moss and Daryl Hurley, have all seen what happens when they turn the throttle on a PTR-built race bike. As have countless lesser lights – normal riders who understand that truly modifying a bike means a bit more than putting on a tail-tidy and a pipe.

I am one of those lesser lights. Some years back, Phil conspired with me and Suzuki Australia to create the B-Czar. He took one ordinary B-King and transformed it into a carbon-fibre-clad, Öhlins-sprung, 212bhp rocket-sled that had Shawn Giles shaking his head in in delight after belting it around Sydney Motorsport Park. I gave it to Gilesy to ride because I simply didn’t have the correct amount of skill required to give Phil any constructive feedback. Phil needs to hear more from his riders than a litany of Serbian, Russian, Greek and Italian swear-words, crazed eye-rolling and hyperventilating.

I ended up buying that bike, primarily so I could hyperventilate, roll my eyes and cuss at it in private. And so I could say that I owned Phil Tainton masterpiece – because that is what it was. It was like owning a Rembrandt. 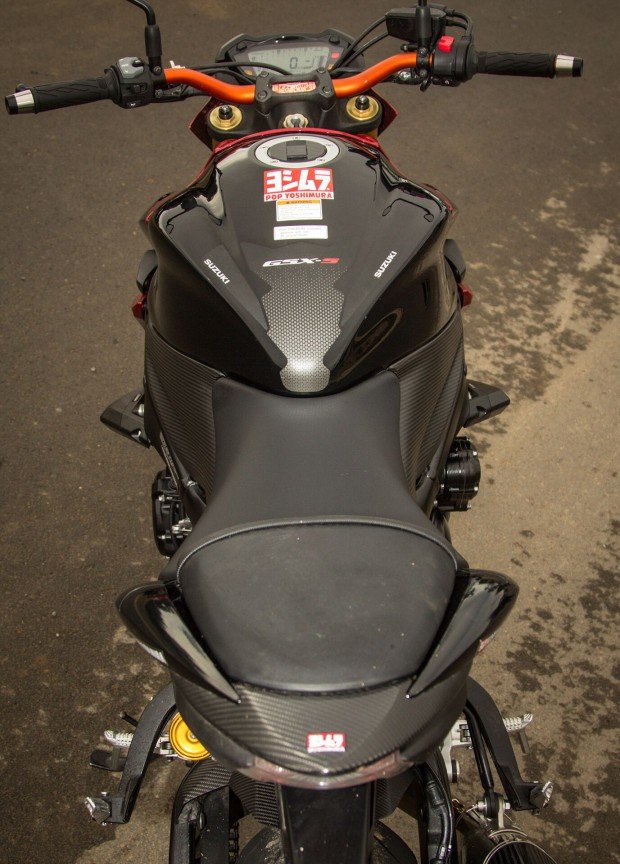 Comfortable, fast, and non-threatening to look at. Almost.

And now Phil has created another Rembrandt.

He has taken one perfectly good Suzuki GSX-S1000 and turned it into something otherworldy – but not so’s the casual observer would notice.

Like all great works, the devil is in the details – and in this case, the details hidden inside the engine cases. And it’s a hell of a devil – the kind of fiend that has yellow claws and red fangs and huge head-cutting shoulders, and is at your beck and call each time you need that kinda crazy.

There’s a list at the end of this piece which itemises the engine internals. Read it. Try and grok what it means.

I spent three weeks riding it. And I still can’t quite comprehend it. The PTR GSX-S1200 is so far removed from normal high-powered, road-registered motorcycles, it occupies another stratosphere altogether.

But as I said, to the casual observer, it’s just another GSX-S1000 with a can. 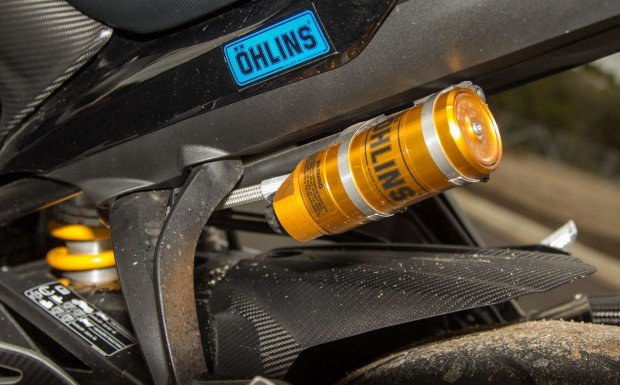 This is the shock PTR custom-built for the GSX-S1200. I reckon they’ll throw in the sticker for free if you’re polite.

And then you thumb the starter button.

Straight away you know something is not right.

The normal even Gixxer idle is not there. Instead there’s this grumpy, but heartbeat-regular GRR-GRR-GRR sound as those amazing internals begin to bathe in cold oil as they steadily warm themselves up for sexy time.
That’s the foreplay. And foreplay is important when there’s so much going on inside the cases.

With two bars on the temperature gauge and the idle now an even GRRRRRRRR, it’s clobberin’ time.

But only if you want it to be. That is the beauty of what PTR builds. Unless you decide it’s time see the Face of God, you’re just riding a perfectly fuelled and mild-mannered motorcycle – albeit one that sounds like it’s going to tear off heads and shit down necks. Most people won’t know what they’re hearing when you ride casually by. But some people will. Those people will hear you ride past and those people will know that what they’re hearing is something diabolical. 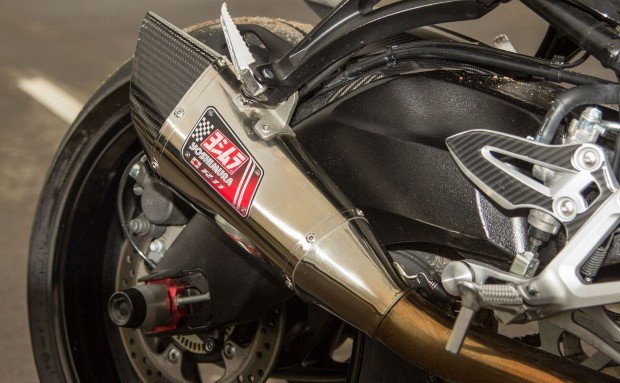 Sing, so the world may dance to your song. Or run and hide.

There’s no lag. Nothing is spooling up. Fuel is not being looked for by ECUs. Everything is there all at once and all the time. Instant bloody everything.

It delivers all the really dark stuff that lives on the other side of exhilaration, and it delivers it upon the instant.

The rear wheel is getting 205bhp (145bhp stock) punched into it and there is 142Nm (106Nm stock) of torque at 9000rpm, with a very slightly curved but mostly flat delivery from 7000 to 11000rpm. So it is totally sweet to ride in a wide-eyed, fast-breathing, evil-grinning kind of way. 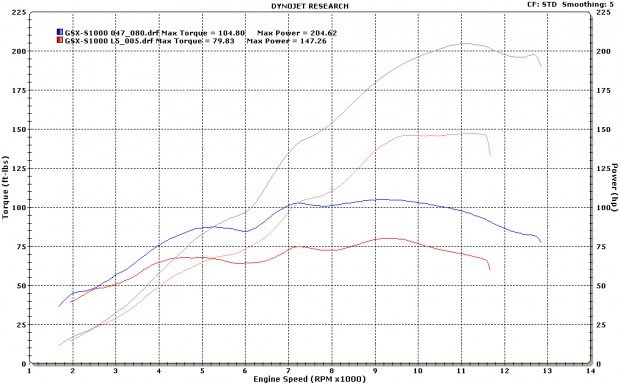 The red line is stock. The blue line is PTR.

And that never gets old. And you never get used to it. This is the kind of bike you will never tire of or become blasé about.

Sure, there are any number of stock weapons out there that will turn your brain into crud and your guts into sauce.

But not like this. Open the throttle on this and you’ll instantly know what ‘serious’ really means.

I did not turn the traction control off…, well, I did. Once. Then I turned it back on again.

The stock GSX-S comes with switchable traction control which you can turn off. And maybe you should now and again. But this PTR thing churns at the road with such vehemence, with such relentless intent, having traction control is kinda mandatory. Ride it in anger and you will see the TC light winking at you like an amber blinker in those micro-seconds you’re actually taking your eyes off the road. 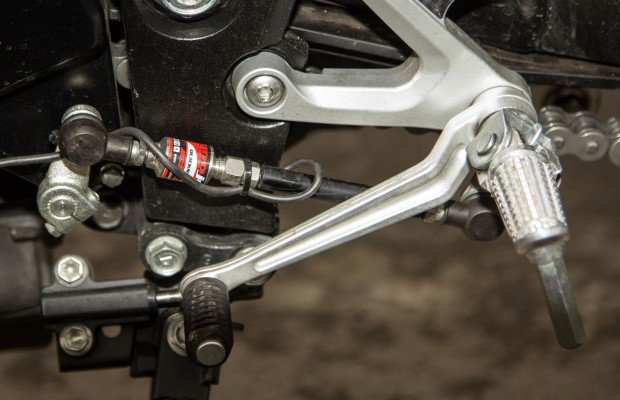 How to make an already superb gearbox more superberer.

I do not know what its top speed was. I would be lying if I said I saw anything more than 240-and-a-bit. But then I don’t care what its top speed might be. I just care that this will out-accelerate everything on the road, in pretty much any gear you happen to be in. You don’t even have to worry about the clutch. There’s a quickshifter that takes care of that nonsense for you. All you have to do is keep the front wheel down and hang on. Maybe think about what prison food is like. 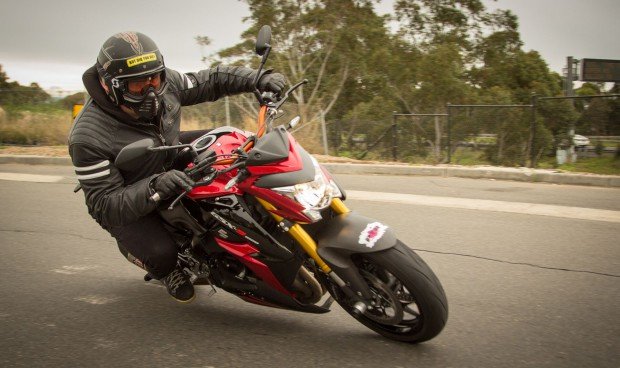 Are you watching, Vinales? I hope not.

Naturally, Phil is not just going to let all that power and glory romp freely about the place making a menace of itself.

Great suspension is crucial when great power is being provided.

It’s almost endlessly adjustable and if the bike was mine, I’d spend a bit of time getting it spot on for me. As it was set when I got it, there were no issues. It didn’t push me wide coming hard out of corners, the back-end didn’t chatter when I was being silly, and it didn’t nose-dive like a Stuka when I was death-braking into bends I had no business being in at the speed I was doing. 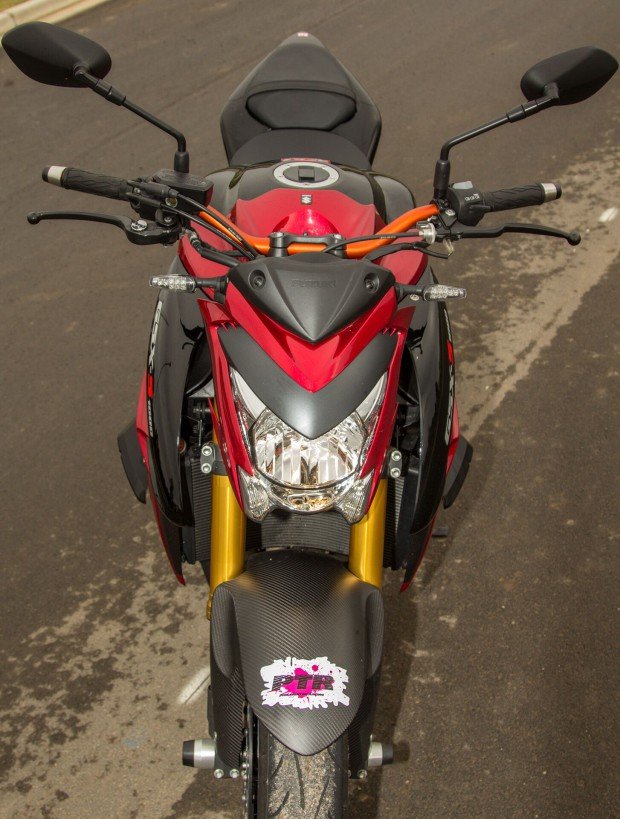 I spoke to Phil briefly about this wonder he had made, and what the hardest bit of the build was to get right.

“Only the whole thing really,” he laughed. “Actually, nothing was exceptionally hard. It was a relatively straight-forward engine-build after I did the numbers and I got the bore and stoke ratio I wanted. Of course, Öhlins don’t make a shock for it. So the one that’s on it I made and developed it on the shock dyno. I got a pretty good handle on shocks these days.”

Here then was a bike, complete, in every sense of the word.

There is not a rider deranged enough to wish for more power, better suspension, better brakes, or better handling from a road-bike. I’m pretty sure that such a thing is not even possible.

The stock GSX-S1000 is already a beaut package out of the box. You can read about my time with it HERE.

It’s brilliantly priced and offers more bang for your buck than just about anything else.

But this…this is next level stuff. 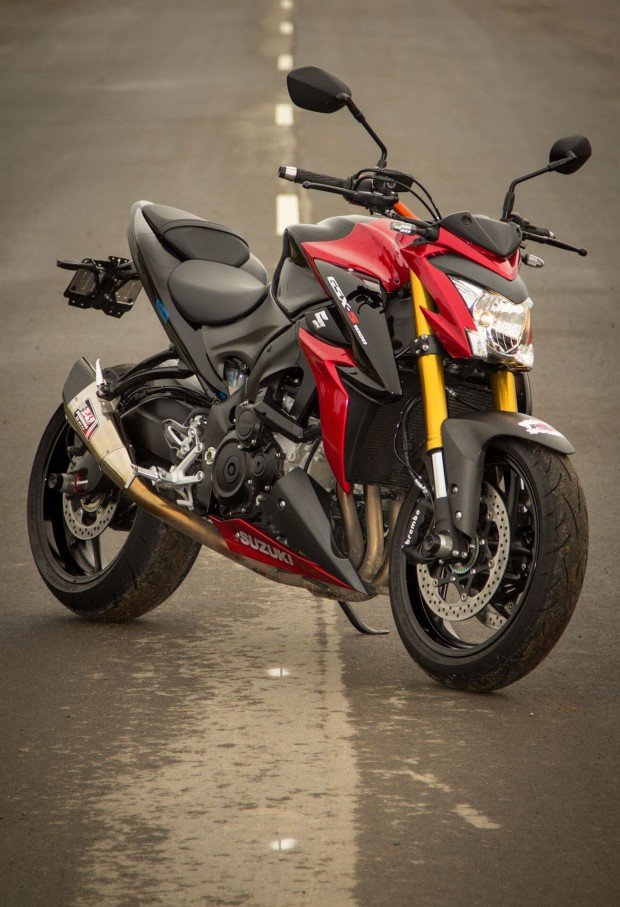 Phil Tainton has built a bike that has utterly ruined me for every stock factory offering I have ridden thus far.

They are all as dust.

This doesn’t make them bad bikes. It just makes them stock bikes.

But as I trust I have made clear, this GSX-S is not a stock bike. And cannot be compared against stock bikes.

They are what they are. This is what this is.

And it is astonishing.

From this day forth, everything I ride will be consciously measured against this stroker.

And it will be found wanting.

Thanks, Phil. You fiendish, heartless, cruel and utterly brilliant bastard. 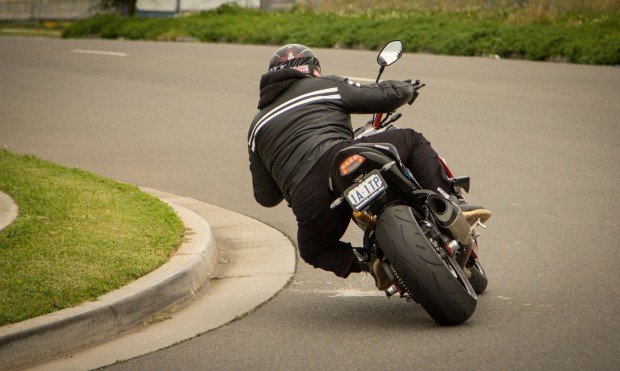 But naturally-aspirated engines that have been bored and stroked…well, they are a glory

And please don’t give me some tired old whine about how expensive it all is and why anyone would do such a thing.

Of course it’s expensive. Going fast has always been expensive.

And as to why anyone would do such a thing…heh.

Tell me you don’t know of a dickhead who’s spent more on an engagement ring. 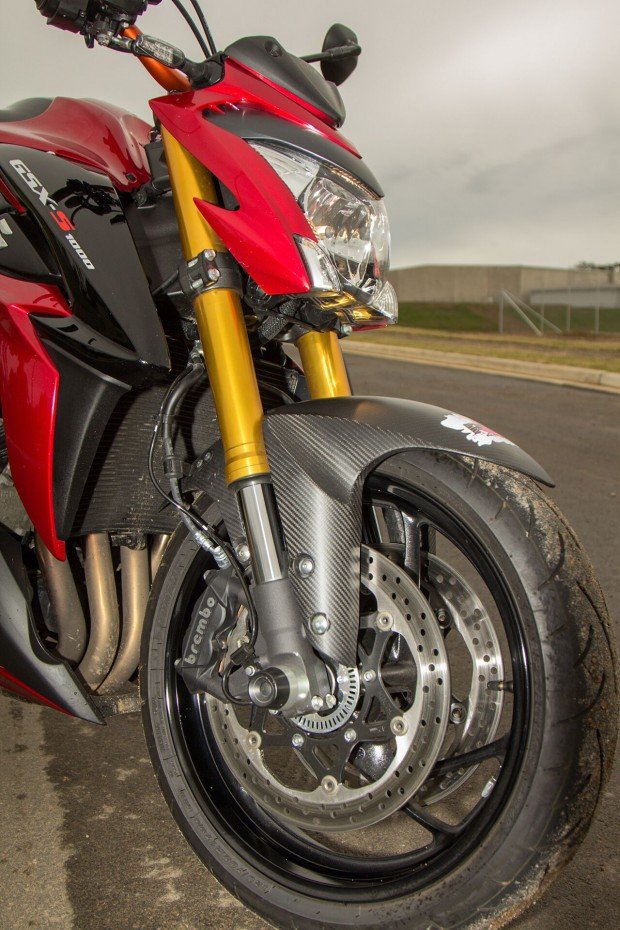 The gold standard in front suspension.

None of that engine stuff is any good if you can’t ride the bike. That is why smart people don’t skimp on the suspension. There’s no point in having a 4000Nm of torque and 6000bhp if your chicken-strips are palm-wide plains of shame, is there?

There’s fancy bits and pieces all over the bike. I spotted a quickshifter, tail tidy, blinkers…and then I didn’t even bother. The quickshifter is wonderful and very welcome, the rest is bling for bling’s sake. It costs what it costs. Once you’ve spent all that money on the engine and the suspension, you’ll stop caring about little things like blinkers.

Please note that none of the above includes the cost of labour necessary to fit it all up. You, of course, are free to put it all in a box, take it home, crack open a beer and have a go. I shall pray for you.

Or you may visit PTR HERE.