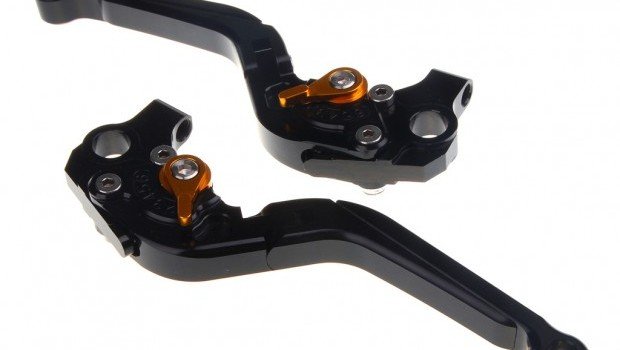 I bought some cheap Chinee levers for my VFR.

It started when I decided I should replace the brake lines because they’re twelve years old, so I bought some stainless steel braided lines.

The entire job was a disaster.

My garage workspace is congested and poorly lit, and while moving the bike into the right position early in the piece I didn’t push the sidestand forward enough and it fell over and bent the clutch lever into a stupid shape that reminded me of that idiot cartoonist that draws the Shrinking Morning Herald calendar that everyone got until they started charging money for it.

I got a bloody great big shifter and tried to straighten it, and it snapped. The lever, not the shifter.

So I went on line and bought levers from motorcyclepartsale on eBay. They are like my friend Ross’s cheap Chinee levers, except they fold upwards like an F15 Tomcat’s wings, and they are adjustable for length like the NBN budget. They cost $48, from memory.

I left the length standard. I tested the folding upwards by pushing them idly with my gloves when bored. I adjusted them with the built in adjuster. It works fine.

The brake lines work fine, too. There are eleven of them on the VFR thanks to the Dual Combined Braking System, and they take about a billion years to bleed, although I installed Speedbleeders at the same time. I replaced all the pads while I had everything apart. I rode to Lithgow to visit the aged relative today. The brakes had bedded in nicely by the time I got back.

I remember when I had my BMW, the manual said to replace the brake lines every two years. I just checked the Honda manual, and it said to inspect them every six months and replace them if they are damaged. The whole exercise was probably a complete waste of time, or a metaphor, or something.

But, back to the levers. They work well.

I have noticed that when I grasp the left one, the clutch disengages, and when I grasp the right one, the brakes apply. This is substantially in line with my expectations, and I shall be clicking the feedback link and advising eBay that the product was as advertised, and delivery time was as expected.