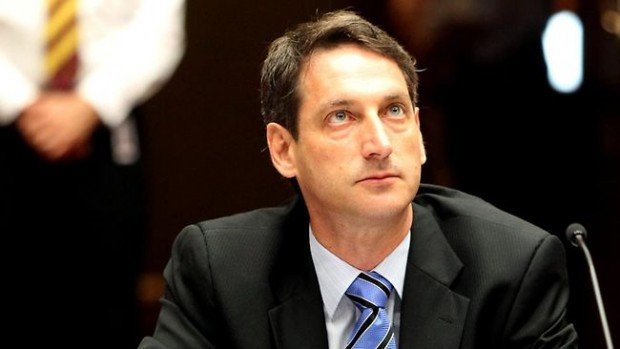 It would surprise no-one in NSW to know that the current Roads Minister, Eric ‘The Bus Lane Blaster’ Roozendaal, is quite a shiny melon.

When some 10,000 car-driving cat-rapists were recently smashed with speeding fines for doing far more than the well-posted 40km/h limit through Sydney’s sexy new Lane Cove Tunnel & Revenue Providore, Eric’s first reaction could’ve been paraphrased as, “Suck shit, peons! Go to court and moan about it.”

The cat-rapists were outraged. They immediately got onto the talkback radio czars and voiced their outrage, which echoed through the airwaves and were eventually heard by Premier Morris Iemma – the very same Morris Iemma whose government recently got re-elected with the catchy election slogan “We’re crap, but we’re trying.”

Morris spoke, probably somewhat sternly, to The Bus Lane Blaster (yep, Eric got nailed a while back for illegally using a marked bus lane for his personal transportation purposes), and the cat-rapists witnessed his complete volte face the next day. All their fines would be quashed and another 1000 speed signs would be installed near the tunnel, probably coupled to fireworks, massive klaxon horns and dancing girls, just so the excuse “I didn’t see the sign” could not be trotted out again.

Now I know that other states have their own highly-qualified road-king shitcocks to worry about, but wither goes NSW (and to a lesser degree, Brackistan), there go they, so pay attention, cos things are getting very Berlin circa 1936 here.

Two new ‘initiatives’ are being placed on the The Bus Lane Blaster’s publicly-funded desk. The first is a reflection of Brackistan’s nauseating (but lucrative) privately-operated hidden-speed-camera cash cow. Last year, Brackistan raped $81 million from road-users’ wallets via 601,970 speeding fines. Over the border, NSW only managed a scabby $33.4 million via a pathetic 350,524 speeding fines.

Obviously, this was quite an unacceptable state of affairs as far as NSW was concerned.

“Yes, God. The bastards keep speeding. I will smite them on your behalf.”

So despite reams of evidence from all over the world that speed cameras do not reduce the road toll, The Bus Lane Blaster has agreed to apply his appalling intellect to consider whether privately-operated unmarked speed cameras would be a good idea in NSW. I only have to look at the comparative balance sheet above to guess what the outcome of his ponderings will be. Thus far, NSW has legislation in place prohibiting unmarked speed cameras being used. But legislation is not an immovable object – and the fiscal indicators are very rewarding.

The second initiative before The Blaster is somewhat more appalling. It comes from the true power behind the political throne, ie. The fascist-criminal bureaucracy that is the NSW Road and Transport Authority (RTA). This pack of mincing degenerates has decided to split itself in two – very much like the parasitical germ it actually is. One part will continue its money-grubbing practices of registrations, stamp-duties, making up hysterical lies to feed the government, etc. The other half will adopt a position similar to the Ministry of Truth in Orwell’s prophetic 1984. The aim of this new branch of the RTA will be to change how people ‘think’ about speeding. The stated purpose of this Manichaeistic bullshit is to make speeding as socially unacceptable as drink-driving and the non-wearing of seatbelts.

How this will occur is still a matter for conjecture, but it will doubtlessly involve vast sums of your tax dollars in the production of television commercials designed to make you repent of the evil you do when you go faster than the arbitrary sign on the side of the road decrees. Cos…um, like that is proven to work.

And there is now an entire bureaucracy being set up to make it so, because as this same bureaucracy has stated time and again, there is “carnage” on our roads and this “carnage” must be halted, lest…well, lest the sun ceases to rise in the east.

Of course, the fact that there is no “carnage” on our roads has never stopped the RTA idiots and their compliant lap-dog media from boldly stating that there is.

Our road toll is tiny. Hell, if Australia would bother growing up a little and accepting that there is, on occasion, a human price to be paid for driving and riding, it would be a great social leap forward.

As it is, declarations of “carnage” are swiftly followed by ever more stringent penalties against the bug-bear of speed, which is always wrongly stated as the major cause of this mythical “carnage”.

Inattention and incompetence are the major causes of road accidents. Cat-rapists have three times as many dials and screens and phones and GPS systems to deal with in their cars than they did 10 years ago. Thus, they simply cannot be expected to actually “drive” the bastard vehicle as well, can they?

Roozendaal and his fellow road-kings know this. The RTA and its replicants know this.

The fact that they now wish to re-program the population to socially condemn something (ie. speeding) that is not responsible for something that doesn’t exist (ie. carnage), is so far on the other side of disgusting it’s just not funny.