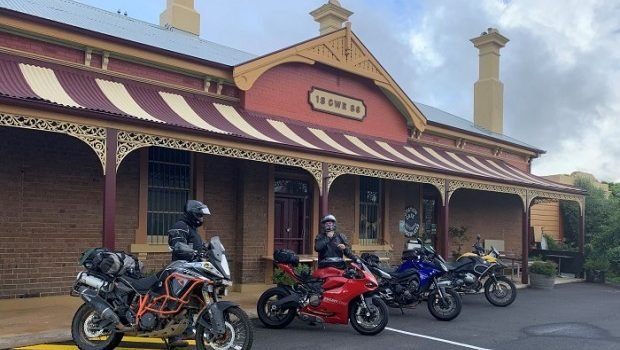 Woody had stopped for lunch a hundred and fifty kays away at Rylstone when the publican at the Newbridge pub cancelled all the bookings. Woody had eight rooms booked for the Newbridge TT. The publican notified Woody by SMS.

I’d arrived at the Newbridge pub when I got Woody’s SMS. “New venue”, it said. “The Exchange Hotel at Blayney.” Plus some obiter dicta about not being happy.

I wasn’t one of the ones staying at the pub, so it didn’t bother me that much. I’d booked at a motel in Blayney. I rode there forthwith. About fifteen clicks. Nice road in parts.

My motel was staggering distance from the Exchange. I booked in. It was about 14:00. I walked to the Exchange and ordered a steak and a beer. Both were excellent.

I went back to the Exchange and ordered another beer. In the beer garden, a fresh-faced schoolgirl with an amplified acoustic guitar sang unconvincingly of having her life ruined at the House of the Rising Sun.

Ed turned up on his KTM 1190 around three. Woody and Cypher turned up on a Panigale and a R1200 G/S respectively around four. Woody told us how the publican at Newbridge cancelled the reservation he made in July so some shearers could stay for longer. We wished a plague of boils on him and drank to that.

Don turned up on his outfit: a BMW R75/5 with Steib clone sidecar and Earles front end. 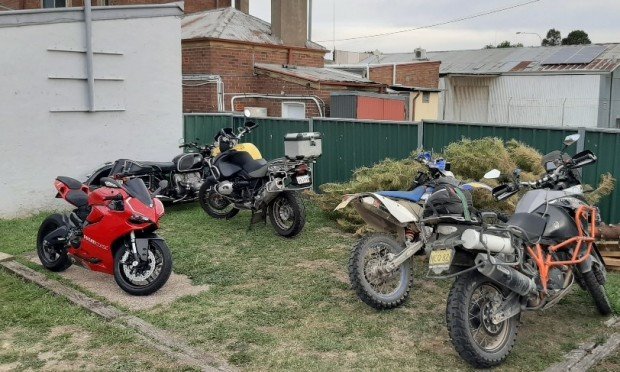 The guys on dirt bikes trickled in. I hadn’t seen some of them in years. Dan, Johnno, The False Daz, Ben, Evil Harry. We had dinner. We had more beer. We reviewed the weather. The forecast was for rain for the next two days. Woody said Race Direction would review the situation in the morning and decide on a route. 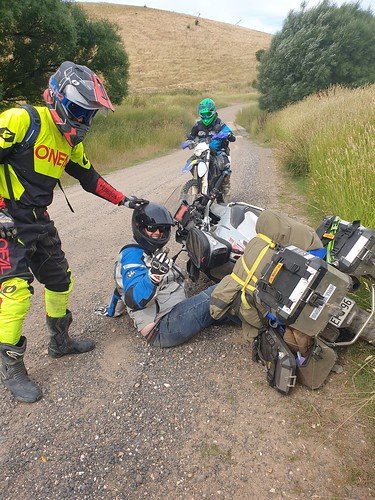 The dirt guys had their own fun on the way in.

It was late. Someone said they had some nice Scotch in their room and we should repair to the upstairs balcony outside and drink it. Some did. I went back to the motel.

The weather was nice in the morning, despite the forecast. It was also the Boxing Day public holiday, so all the breakfast places were closed. We had service station coffee for breakfast. I checked my phone.

“Checking the weather”, I told him. “I typed ’Stormfront’ into Google, but I haven’t got any location specific information yet. I’m pretty sure I know who’s responsible, though.”

“I’ve got the BOM app”, said Woody. He scanned the rain radar. He said if we headed south we should miss the rain.

We headed south. The road south from Trunkey Creek is the stuff of legend. Nice sweepers, insane tight swervery near Tuena, more of the same for twenty clicks past Tuena. We stopped in Crookwell, where there was a café open. We had coffee.

We rode from there to the Laggan pub for elevenses. It was closed.

We rode to Taralga. Both pubs were closed.

We headed north through Shooters Hill to Oberon. That’s a good road, too. The Royal was open, so we had beer and lunch.

We got back to Blayney mid-afternoon. The rain started.

We drank beer. We argued whether the Trunkey Creek Crookwell road was the best motorcycle road in the country, or just the state. Evil Harry drank lemonade and shook his head whenever someone offered to buy him a beer. The other guys on dirt bikes said they’d had a great day, and talked about the kangaroos and snakes they saw on the trail.

The dirt guys left early the next morning. Woody and Ed and Cypher and I rode to Millthorpe for breakfast. It’s thirteen clicks from Blayney. It’s a pretty place. The architecture is country town charming. There was a building opposite the café called the Grand Western Lodge. It had great old wrought iron balconies. We wondered if it was an old pub. 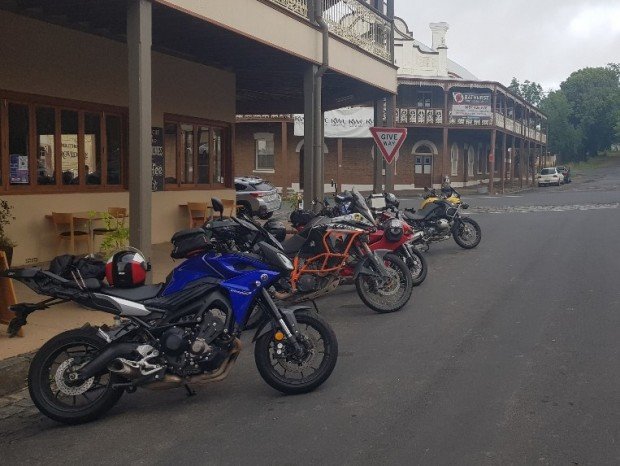 Breakfast was opposite the Millthorpe House of Horror

Woody looked it up on his phone. It appears that it used to be a home for handicapped people, and the previous operators had to pay over four million dollars in a lawsuit brought against them by their residents’ representatives for horrifying neglect, assault, deprivation of liberty, administering unprescribed stupefying drugs, slavery, and other stuff.

We finished our breakfast and rode down to the old railway station for a photo. We listed the cafes and pubs in Millthorpe. Woody wondered if he should run a TT out of there one year.

Woody and Ed and Cypher left. I’d booked an extra night in the motel. I got on the bike and went out and explored some of the roads south of Orange. There were scenic rides around Carcour, Burnt Yards, Errowanbang and Tallwood. It started to rain again, so I headed back and had some lunch. I drank the whiskey in my hip flask and read a book.

It was clear the next day but the BOM site showed rain over the mountains between me and home. I packed the bike and decided I’d do the Trunkey Creek to Crookwell ride again. It really is a fantastic road.

I went across from there to Goulburn and headed back home by the motorway. It was boring, but I didn’t get enough rain to bother to put my rain pants on.

I got home in time for lunch. Cricky’s funeral was livestreamed at 14:30.

He would have approved of the manner in which they sent him off.