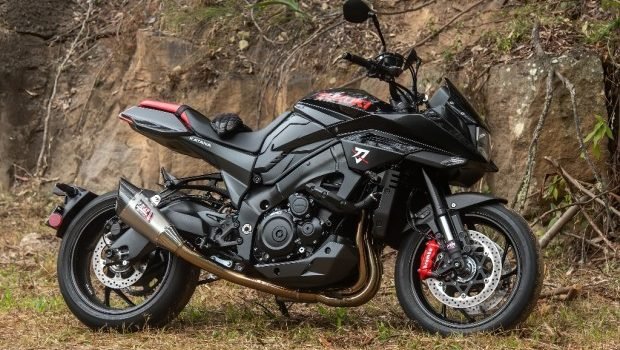 IMAGERY BY CARL HENSEL & NICK ‘WHAT’S THAT HISSING NOISE?’ EDARDS – which is when we cut the photoshoot short so I could get home before all the air left my tyre, and then I went to see Carl Hensel a few days later because Carl likes Katanas and he was good enough to shoot some statics and details. 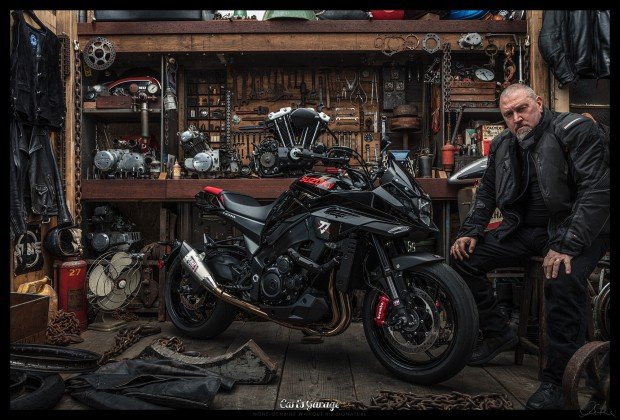 “Bring me some beer. I’m thirsty.”

I don’t get to goosebump myself over the sound of a full racing system, marvel at the improvement high-end suspension makes, or put stickers of terrible red-faced demons and swear words on the tank. 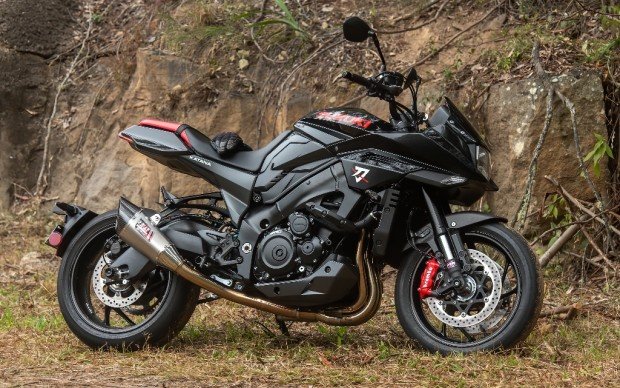 I have to ride them and review them as they are given to me. I maybe screw with the pre-load a bit if I’m having a fat day, but I usually just put petrol in in and try to return it in the same state it was given to me, minus some tyre wear.

So yes, I am blessed. 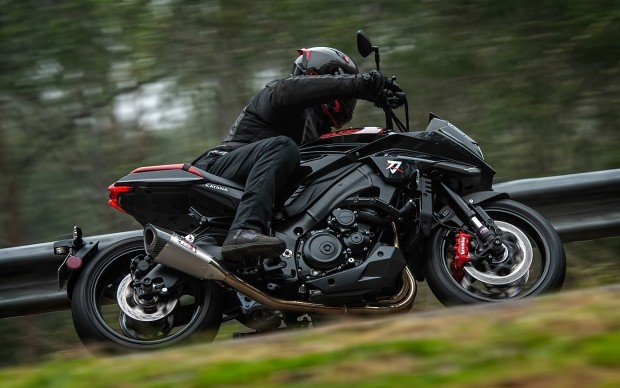 That pipe is just gorgeous,

But once in a while, I am blessed in another way.

Now and again, in the Darkness at the edge of town, the sacred forges and glistening operating theatres where Mr Phil Tainton, the First of His Name, wields his magic, fire up.

The drums pound, the naked slave-girls dance, and the night echoes with portent and power. 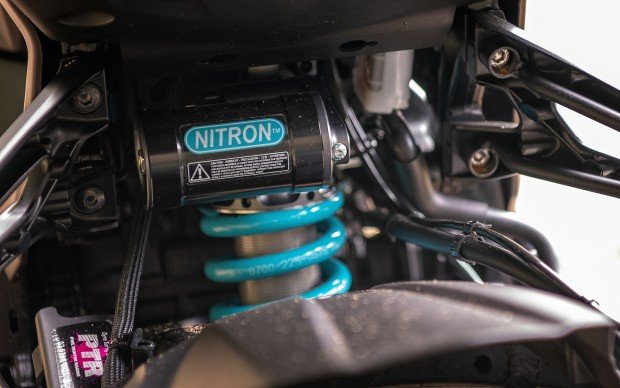 Is that not an lovely pale blue?

Twice in my life, Phil Tainton has gifted me, and the world, with motorcycles that have redefined my views on what bangs and what really bangs.

The first creation was the B-Czar – a bored-out Suzuki B-King with hand-made cams that belted 212 horses off the back wheel, and even made three-time Aussie Superbike champion, Shawn Giles, grin and shake his head in what passes for awe in racers of his calibre.

Me? I just whimpered and screamed a lot. But I ended up buying the bike because it made me crazy in all the right ways. It was that good. 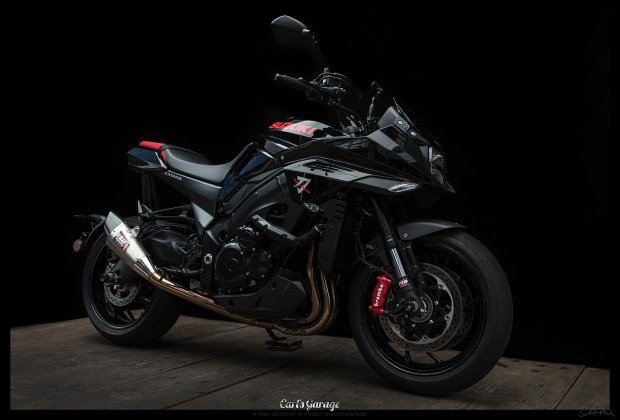 A few years later, Mr Tainton turned his talents to the well-mannered, eminently capable, but rather prosaic GSX-S1000. He burned some evil incense on that build. The slave-girls were really kicking their heels up around the fire that night.

What came out of his temple was a GSX-S1200. It had 204 horses caning the rear tyre, all the Öhlins needed to make those horses behave, and a heap of special witchcraft tuning, which is one of Mr Tainton’s specialities. 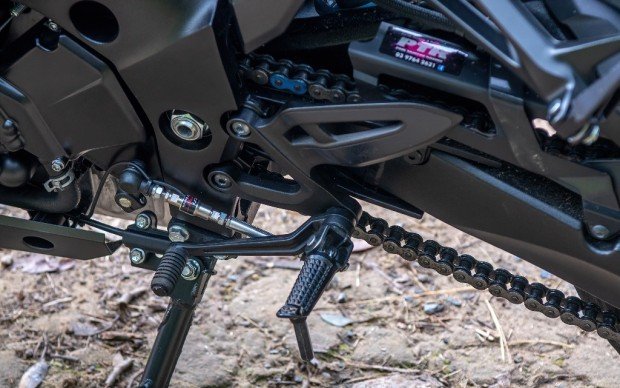 You can read about all of that HERE. Or my review of the stock Katana HERE.

What both these builds had in common was the sheer excellence and dedication Mr Tainton puts into his work. The bikes that come out of his temple are orders of magnitude better than stock bikes.

And that’s the trick. That’s the secret. 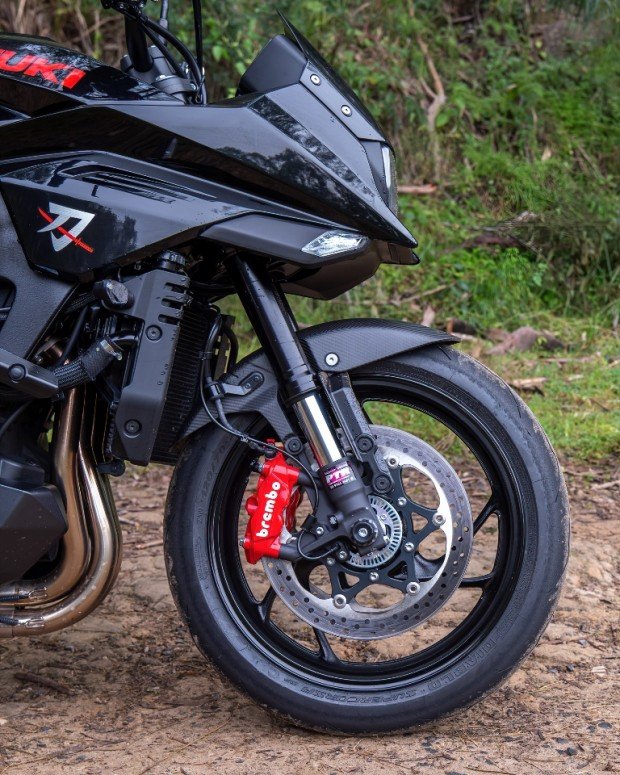 Brembos with make-up on them. The brakes are stock. They’ll do you. Relax.

Anyone can bolt exhausts and shocks to a bike, and then hammer away at the internals of an engine, maybe using a post-hole auger to bore it out, and lotsa silastic so it doesn’t leak when he puts it back together. But very, very few temples of speed do it as well, with such finesse and such attention to detail, as Mr Tainton’s. The bike that comes out is, in every conceivable and measurable way, better than stock. 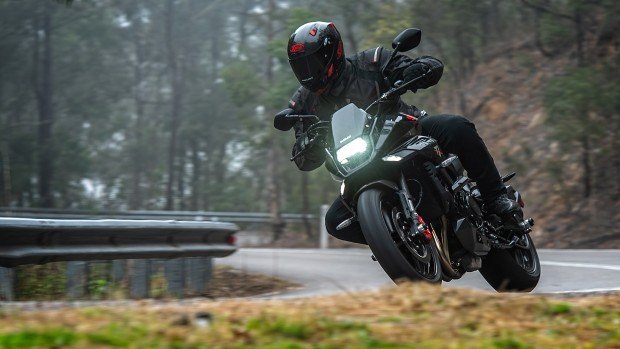 The other thing these two builds had in common was they were not cheap. The GSX-S1200 mods came in at about $15,500 without counting the bling, while the B-Czar was well north of $25K without even counting the labour.

“I have great fun doing these big-bore builds, but they are so expensive very few people can afford them,” Phil told me when I called him. “But we do them because we can.”

I said “Amen” when he uttered that truth. 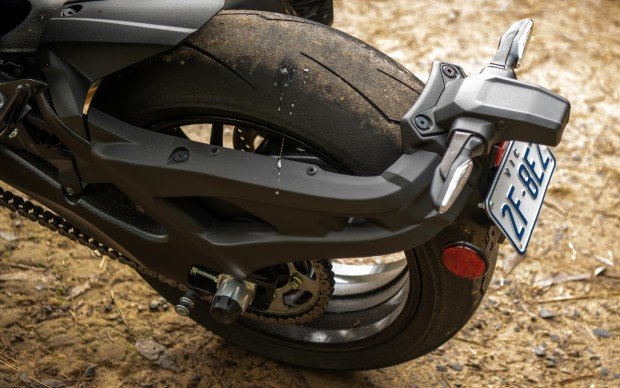 Look closely and you’ll see my saliva bubbling from the hole. And yeah, I would get rid of this bendy thing and fit a tail-tidy.

Anyway, some time back, there was talk Mr Tainton had got his hands on a new Katana. And when the time was right, the temple doors would open, and the sweaty slave-girls would wheel it out into the sun, and we would all rejoice.

And so it came to pass. The Phil Tainton Racing Katana, in Serial Killer Black with red highlights, came into this world and into my possession.

“Hot damn!” I yelped. “I hope it’s got 300 horsepowers and 1000 torques! I bet he’s bored it out to 1500cc, and the second I crack that throttle it’s gonna melt time and send the Plague-ridden Earth into orbit around Saturn! It’s gonna be huge! My wife will mourn me!” 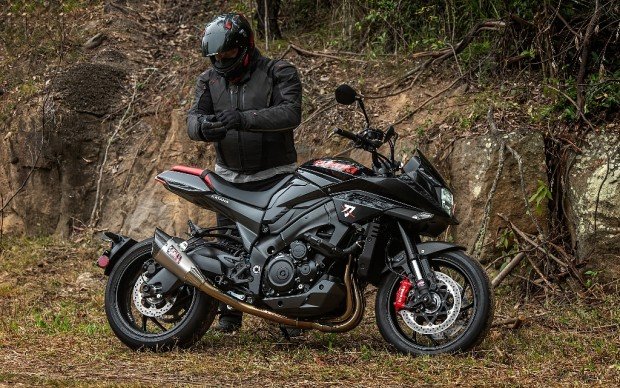 I was seconds away from spraying my face with silver paint and screaming “I live! I die! I live again!” in the finest Fury Road tradition.

I collected the bike and pressed the starter button.

Yep, there was that familiar PTR “Grr-grr-grr-grr” lumpy idle on start-up. I waited until it settled into a smooth growl because one does not demand things of such engines until their blood is hot and rich with hate, and ready. 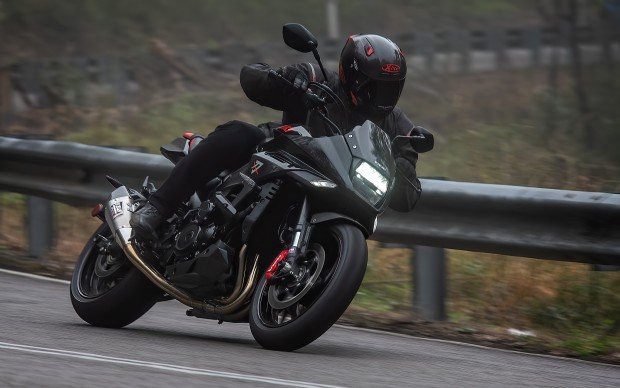 Toss those mirrors away and it’s damn fine.

The throttle response was amazing. You just need to flex your fist rather than perform an active twisting motion. No light-switch, but smooth and instant on. No hesitation. No hunting at low revs. The sound through the full Yoshi system was feral. I turned my cop radar up to 10 and prepared a list of semi-believable lies if I was stopped. Did that stop me revving the buggery out of it? Heh. You don’t know me, do you?

Through the traffic on my way to Mother Putty the PTR Katana was menace incarnate. People rolled up their windows as I lane-split, the shriek-wail of the exhaust rendering their stereos redundant.

Why is it not back-firing on over-run? I wondered. 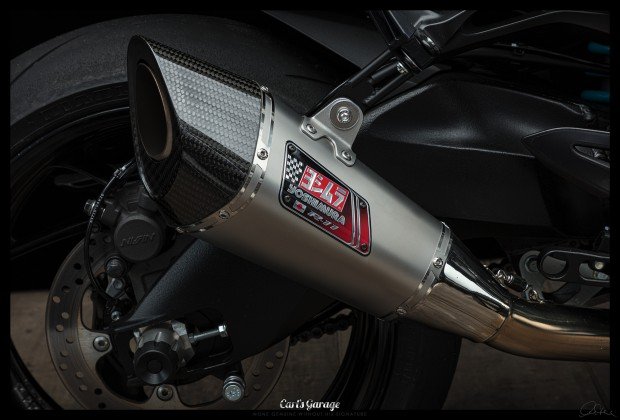 Had Mr Tainton tuned that crap out of it? Was that even possible?

I hit the Mother mid-afternoon like the vengeance of Satan.

The powershifter, the scream of the exhaust, the muscle-flex response of the throttle, all melded into a typical and wonderful PTR experience.

The bumps were absorbed rather than ridden through, and I was wondering just how much money had been spent on the shocks. Mr Tainton is as good at suspension as he is with engines, and he understands the crucial marriage between the two. There’s no point in having world power, if your suspenders turn the bike into an over-powered pogo stick and you into meat-jam. 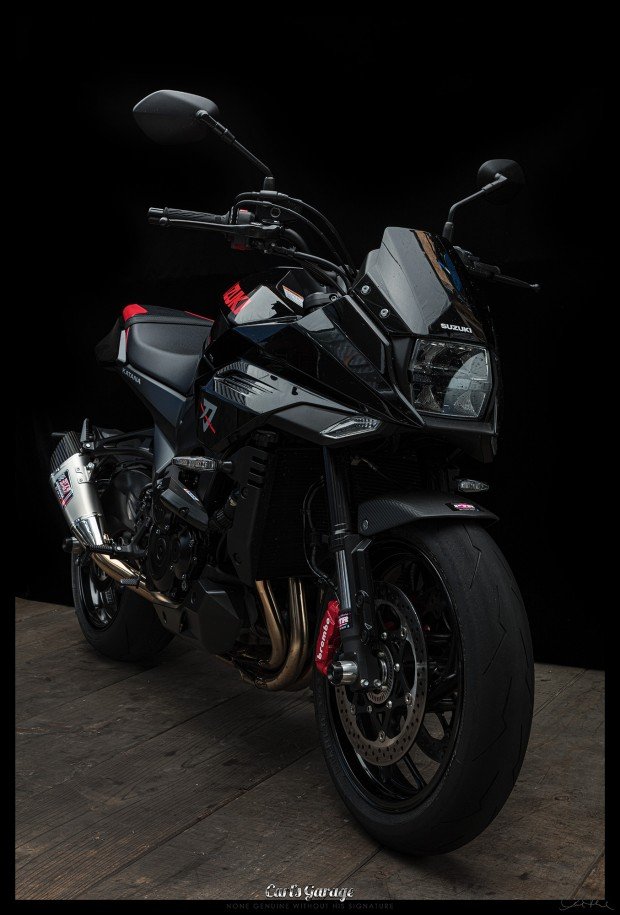 Can you see the edge of town?

What had he done to it?

Like, it went and all; it was responsive as high-end processor, but the suspension was the colour of a pretty girl’s underpants, and not the bold yellow of PTR’s traditional Öhlins… 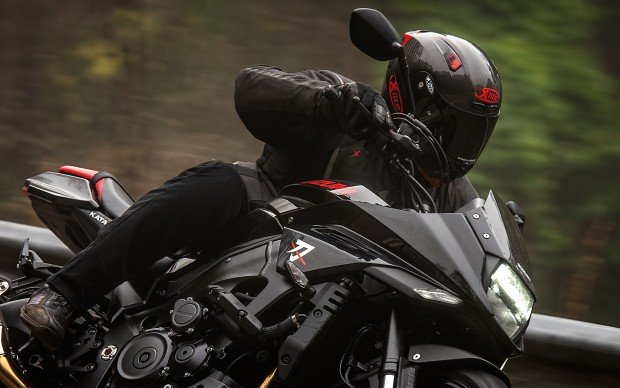 I was colour-co-ordinated to perfection on the day.

This could not be a big-bore. It lacked that mid- and high-range bowel-emptying, no-breathing madness only something with 200-plus horses offers.
I got home and called Phil.

“What have you done?” I asked. “That’s not a stroker. It goes like a comet, but it’s no big-bore, is it?”
Phil laughed, and swear I could hear the tinkle of slave-girl bells.

“I guess it’s like a povo pack,” he quipped.

“Povo pack? Bullshit. You did not cobble that Katana out of old pots, melted alloy fence off-cuts, and some chip packets. There’s nothing impoverished or poor about it. It is astonishing, and I don’t know why.”

So Phil told me, and then he sent me a list, and while it still doesn’t compute, the numbers just don’t lie. 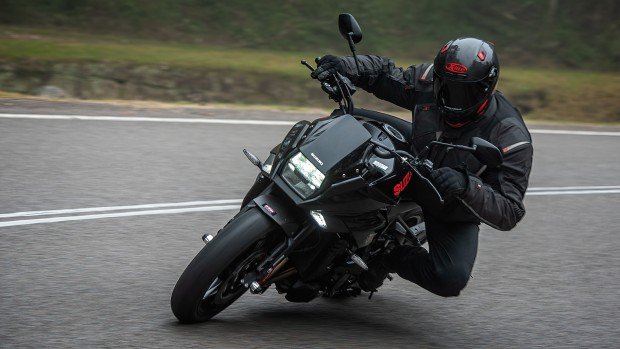 You stick that lens out a little more…go on…

Labour charges to modify, dyno and fit Nitron cartridges to Forks – $440.00
If you wanted to fit them yourself, then PTR will do the mods and mail them to you for $140.

I called him back.

“You made a Katana behave and sound and go like that for less than seven grand?”

“What I was trying to do was make it better while spending as little as I could.”

“Yeah, but this doesn’t even feel anything like a stock Katana.” 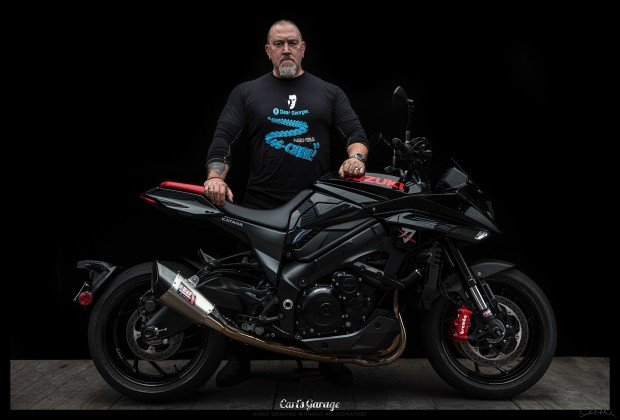 “I wanted to cure the snatchy throttle, and the hesitancy at cruising speed when you get back on the gas. All that is caused by the pollution restrictions the Japanese are forced to include. I am not bound by those restrictions. So I can make the bike as smooth and responsive as you found it to be.”

“I am amazed at how good those Nitron shocks are,” I observed.

“That was a common complain from Katana owners, a wallowing back-end. So I trick-up the Nitron shocks by re-valving them internally and then dyno-ing them. I don’t charge the customer for that.”

“And then you dyno-ed the whole bike?”

“Yes, it makes about 10 extra horses and a bit more torque.”

“That’s not a lot, but it feels like a massive change.”

“I pride myself on the tunes. The tunes are crucial. It’s vital to do it properly. And you need to spend the time to get it right. I want throttle smoothness and responsiveness, so then it’s four or five hours on the dyno. Most shops won’t spend that time.”

There is not much more to add to that, is there?
Every bike you buy is a compromise between legislation and desire. 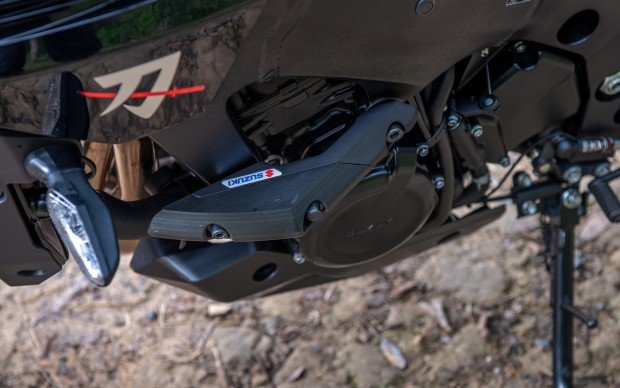 Suzuki does offer a range of bling for the Katana.

So if you want your bike to be something far in advance of what it is, and better in every way, then you need to give it to Phil Tainton.

And you can spend big. But you don’t have to spend big – and this Katana is proof of that.

I let my young mate, Harry, ride it from Grey Gums to Bulga, after telling him should the unthinkable happen, his dad was to put $30,000 in Phil’s account an hour after it happened, and $10,000 into mine for stress-related psychosis. 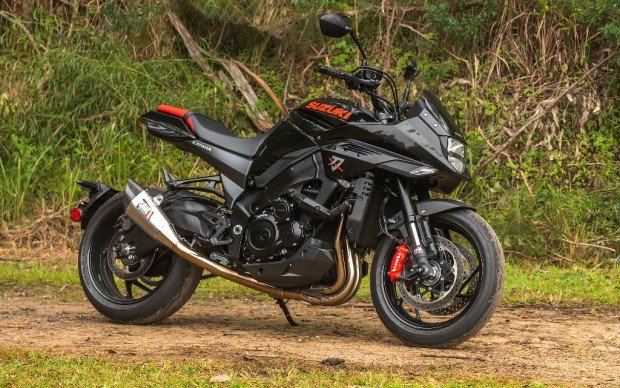 Harry owns a late-model GSX-S. He has a pipe on it. He rides very well and he’s faster than lots of people who think they’re fast. He loves his bike, but he hasn’t got a lot of spare cash because he is young and feckless, and we do have an LNP government which prides itself on an impoverished society. But Harry lusts for the work of Phil. I’m convinced he spends lots of time alone reading about the Phil’s earlier exercises in motorcycling perfection, and then cries because he only has two kidneys to sell to be able to afford anything like that.

When I told him how much it would cost him to make his GSX-S into what the Katana was, he began to fizz like a mistreated can of Coke. Seven grand is not chump-change, but it’s also not 25 grand, is it? It’s doable with only a little suffering.

Is it worth doing? 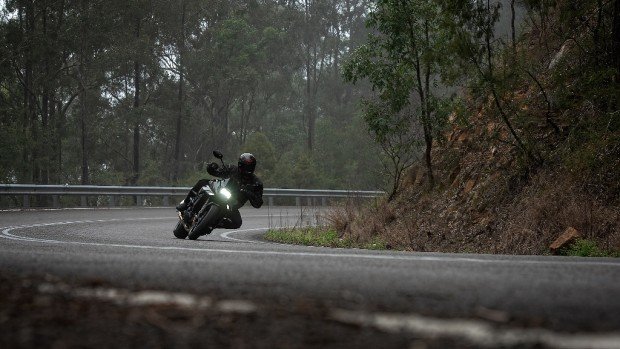 Of course it is. That is a no-brainer. Well, for me it is. Improve the suspension, remove the compromises built into a great engine, and then make it sound like demonic possession?

Yes, yes, every time, yes. For this is the Darkness at the edge of town.

Thank you, Mr Tainton. Your work, as always, speaks for itself.

You can find Phil Tainton Racing at 1/45 Gilbert Park Drive, Knoxfield, Victoria. You’ll see the slave-girls dancing in the driveway.