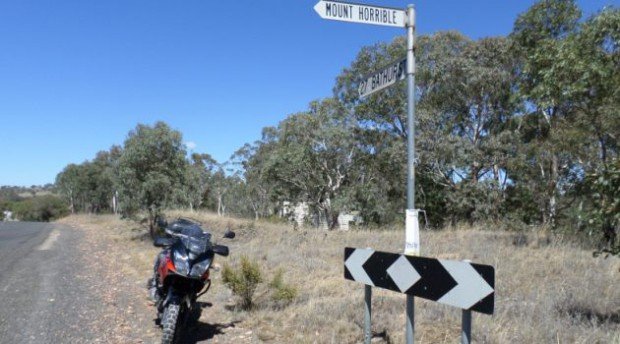 It was time for a stress relief ride. West, I thought, dirt roads. I took the ‘Strom. North of the Great Western Highway, west of Lithgow. Places have great names out there past Curly Dick Road at Meadow Flat.

I stopped for petrol before Richmond. “And where are YOU going today?” the woman behind the counter asked me.

“Mount Horrible”, I told her.

“To steal the Orb of Sandor.”

I rode the Bells Line of Road and the highway, and turned north at Meadow Flat. Out of Sunny Corner, I took the Dark Corner road, and then turned on to the dirt at Cupits Lane. A sign said watch out for everything, including bad roads, log trucks and animals. There are people who don’t?

Cupits Lane looked like a logging track. It became Eskdale Road, which didn’t. On a downhill section covered in stones the size of strawberries interspersed with stones the size of oranges, I thought maybe I should have told someone where I was going. I was glad of the knobby tyres. I wondered what would happen if I hit one of those big stones and fell off and impaled myself on the sharp branches sticking out from one of the fallen trees. I bet there’s no mobile reception. And I didn’t have any water.

About midday, I saw a lone big kangaroo hopping through the trees ten metres off the road. They’re supposed to be asleep during the day.

I pressed the “Cities” button on the GPS, and it said Limekilns was nineteen kilometres away. I kept working the road. It would have been better on a proper dirt bike, with less weight and a bigger front wheel. I figured I could handle it getting a bit worse if I dropped the tyre pressures, but I didn’t have to.

I turned left at the Mount Horrible Road to get to Limekilns and buy some water.

I was in open farmland when the GPS said Limekilns was 0.1 km ahead. I thought there had to be a cathedral for it to be a city. Limekilns didn’t even have a building.

I turned around and went back to the Mount Horrible Road. The altimeter in the GPS said I was well over 900m above sea level. A couple of times it went over 1,000m. I guess one of those was Mount Horrible. There was no sign.

It’s not a bad dirt road. It’s curvy and quite scenic in places. It ends on the Dark Corner Road: more dirt. I rode back to the highway and headed for home.

I stopped at the same service station at Richmond and got some fuel and water.

“Did you get the orb?” the woman behind the counter asked.

I pointed over my shoulder with my thumb. “In the topcase.”

Yokel. As if Sandor would leave the orb in the middle of nowhere.

I got home an hour later. The girl-child was watching some J-drama on Netflix. “Hi dad”, she said. “Where have you been?”

She is an unsympathetic and sarcastic child.

I don’t know where she gets it from. I suspect her teachers.