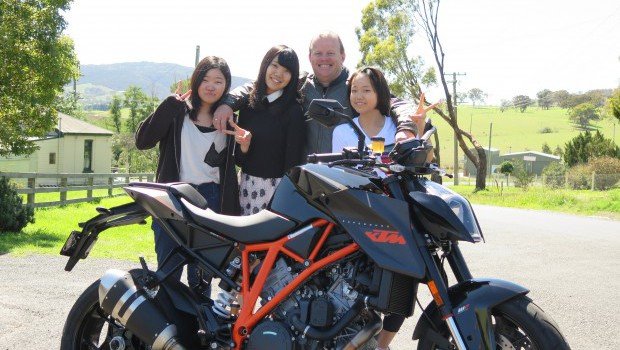 What do you do when a mate buys a new bike?

A new bike that is, so people say, the final word in naked motorcycle performance?

A new bike the Australia motorcycle press seem unable to get a local test ride on?

A new bike bought on a whim four days ago?

A new bike that was bought on a whim four days ago without any mates being consulted? 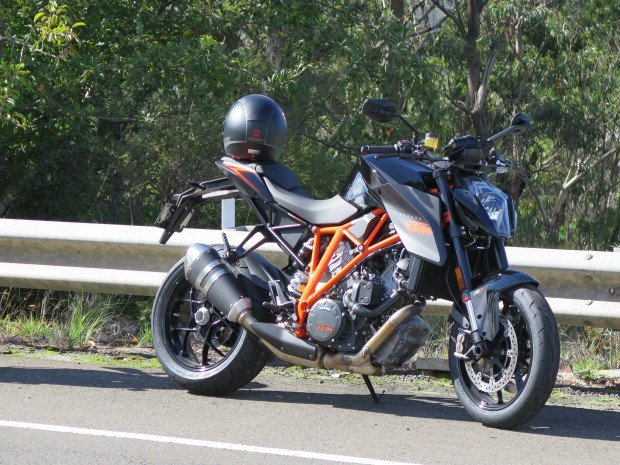 Can you see how rev-limited it is? 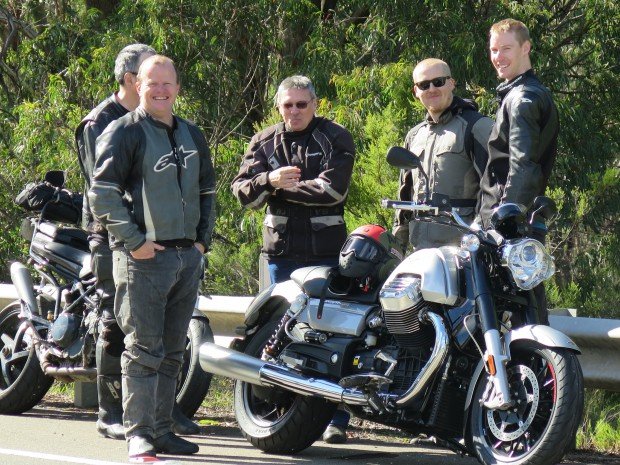 Daz is happy. That is him on the far left in the Alpine Star Jacket, officers. He is several orders of magnitude happier than anyone else there.

Well, I guess you do what men who ride motorcycles have done with mates like this since time immemorial.

You take him out and make sure he can ride it properly.

And so we did.

Al, Boon, Bly, Dan and I took Daz for a short blat over the mountains to Tarana to make sure he knew how all the controls functioned.

By the time we got to Bell, Bly and I were wondering whether we would need to buy a pair of BMW S1000RR HP4s if we were ever going to ride with Daz again. His new KTM 1290 Superduke may be limited to only 7000rpm until its first service is done, but it was obvious to everyone that 7000rpm was more than an elegant sufficiency for Daz on this day. 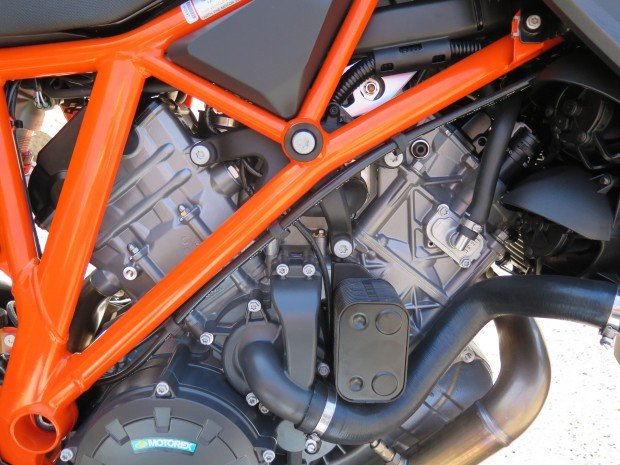 See this? It is carved from torque. Austrian torque. Which is a great deal torquier than other torque. 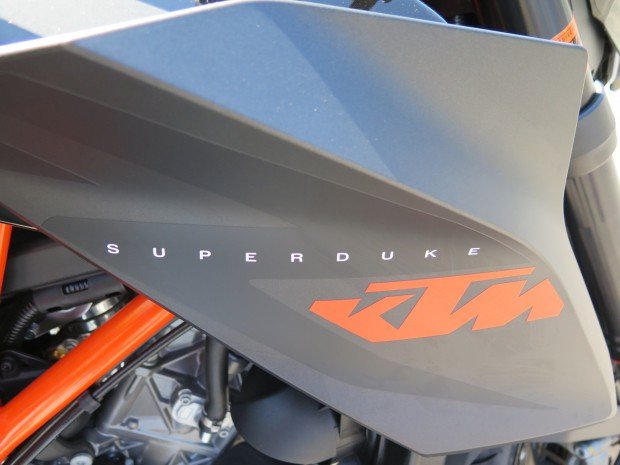 In this case, the term “super” is not overstated.

Unfortunately, 70,000rpm would not have been sufficient for the 50 or so Campbell Newman supporters and their Harleys we were forced to weave through on our way up Bells Line of Road. The speed limit may have been 80, but this herd of lard-filled, badge-plastered, outlaw-motorcycle-club hating tip-rats were just not going to go over 70. Apparently, Freedom cannot be experienced at any velocity over that.

Now I may be judging them too harshly, and they may well have just been having a parade (which would certainly account for their dreary pace), but the chaos that would have ensued had we not been at the top of our game when they suddenly encountered a metre-wide strip of gravel across the road in front of them (a straight bit), could have been apocalyptic. We were right among them, weaving our way through their formation as quickly and efficiently as possible when the Road Admiral beheld the gravel ahead and jumped on all the brakes he had so as to ease his Mega Freedom Glide over the gravel at 20km/h.

The blokes and I were doing 90.

I’m sure our subsequent behaviour will be mentioned at the next meeting. There may even be letters written to the Premier of Queensland. 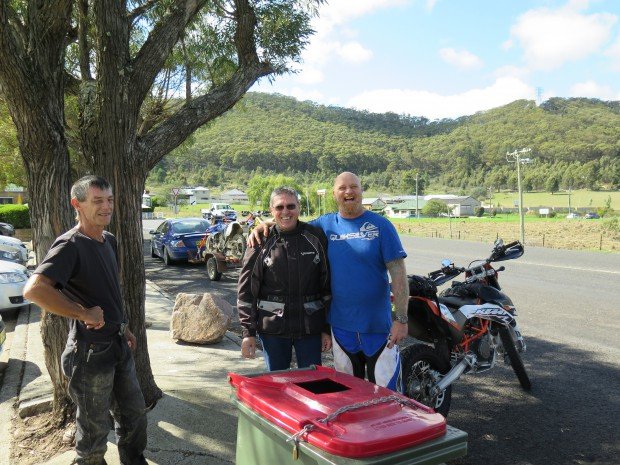 Bluey the Viking hugs Al. On the left is Bluey’s mate, whose name I forgot. But he was also a Viking. 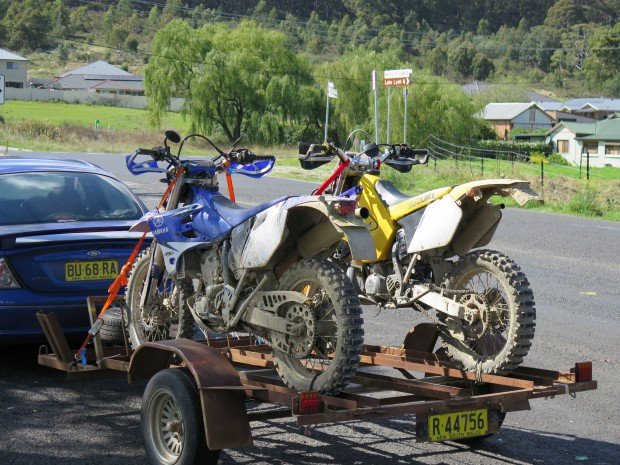 The Viking’s is the yellow Suzuki two-stroke. He says the smell makes him happy. 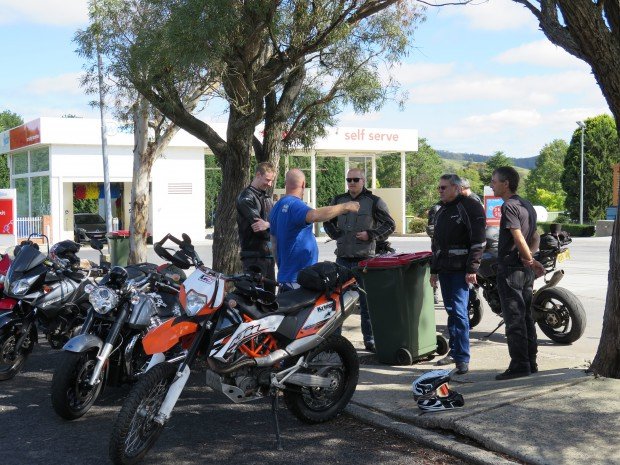 When men gather around a rubbish bin, great things are afoot.

Dan needed petrol, so we stopped at the Tarana turnoff on the Great Western Highway and were confronted by a Viking called Bluey.

Bluey wanted to know “What the fuck is that thing?” that Bly was riding, but he seemed friendly enough about it, so Bly told him that it was once a Multistrada and is now a Frankenstrada – having been thoroughly de-bumosexualed in Bly’s kitchen while he had been convalescing after an accident and taking savage experimental painkillers by the handful.

Bluey allowed that it had been improved out of sight, then explained to us that his habitual disregard of the Motor Traffic Act had kept him without a licence for that last ten years. Thus he was reduced to riding dirt bikes in state forests. He was most philosophical about this state of affairs. 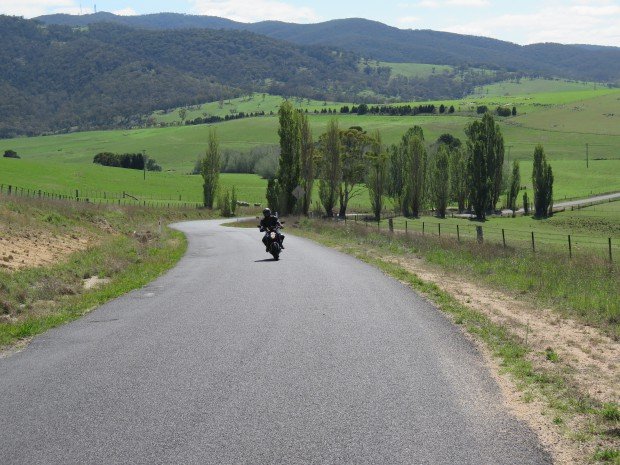 Bly International Airport Where The Big Jet Engines Roar is just to the left. 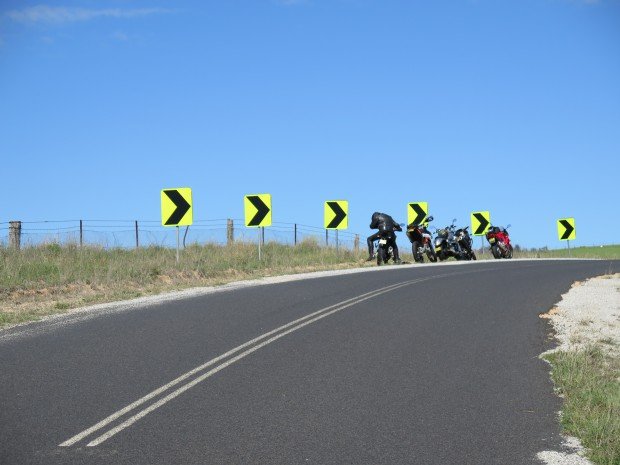 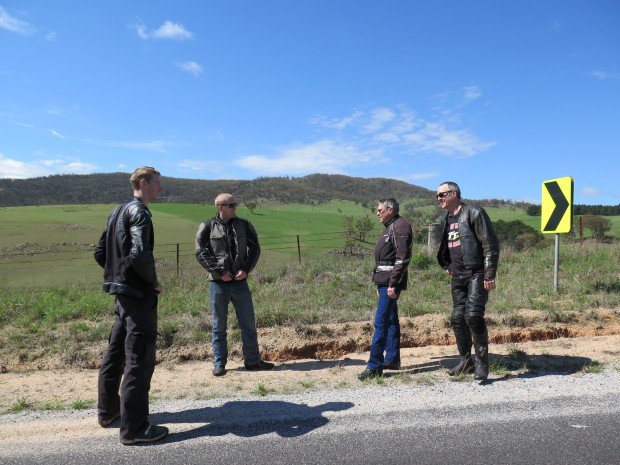 Bly refuses to re-enact his accident. He can be cunty about things like this. 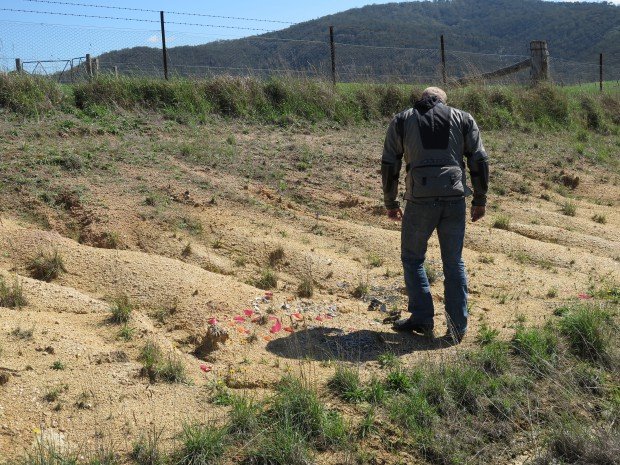 Boon thought he had located the mother lode of Bly’s old Ducati. But it was bits of car instead. Popular corner for that sorta thing.

We bid him farewell and headed off to observe Bly International Airport Where The Big Jet Engines Roar.

Happily, this is in a field adjacent to Bly Corner, where Bly jousted with a four-wheel drive some years ago, came off second best, and subsequently went on to build the Frankesntrada in his kitchen while he was insane on chemicals.

Unhappily, the local council has not yet seen fit to place a plaque there, or in the field where the big jet engines roared when the helicopter came to take Bly to the hospital on that fateful day.

I will probably have to write some more letters about that.

Anyway, it was here, as we walked around and looked for bits of Bly’s old Ducati, or fossilised patches of dried blood, that we discovered that we had lost Daz.

But this was not at all a bad thing as far as Bly was concerned, because Bly was in possession of Daz’s Superduke, so if we never saw Daz again, he would have mourned the least. Daz had swapped bikes with Bly at our last stop, and clearly over-stimulated with the wonder that is Bly’s Frankenstrada, ignored my frantic side-of-the-road wavings and sailed off in a direction that was not the correct one. 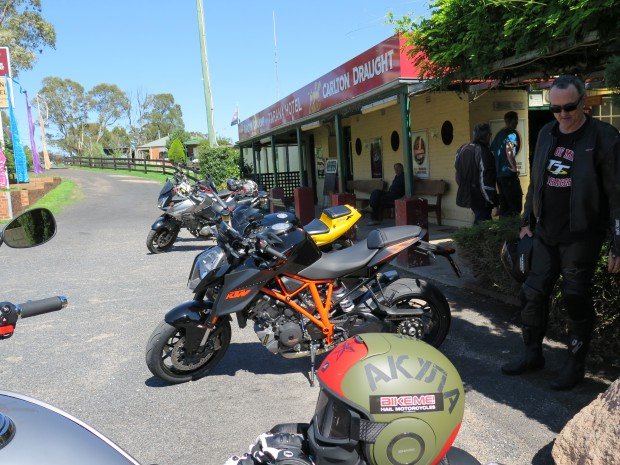 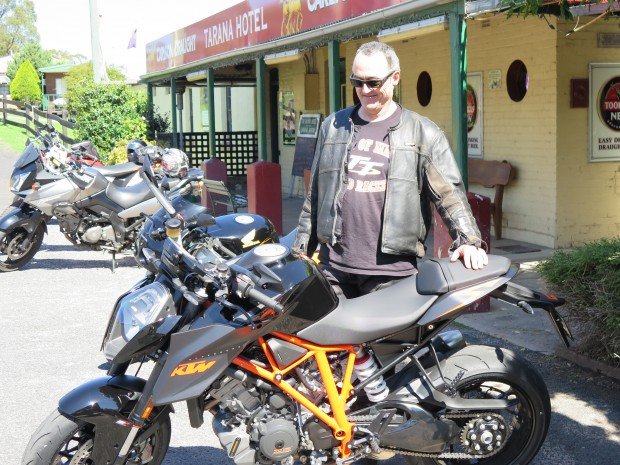 Bly, a man who briefly owned a KTM 1290 Superduke.

But Bly was smiling and I wished it was me that had swapped bikes with Daz at the last stop.

Sadly for Bly, Daz eventually found his way to Tarana and we settled down to enjoy a few beers and some lunch.

This was when I found the Japanese schoolgirls. Yes, I do have a talent for such things. In short order I had persuaded them to pose with Daz’s new “Superbayku” and they were happy to do so.

As you can see. 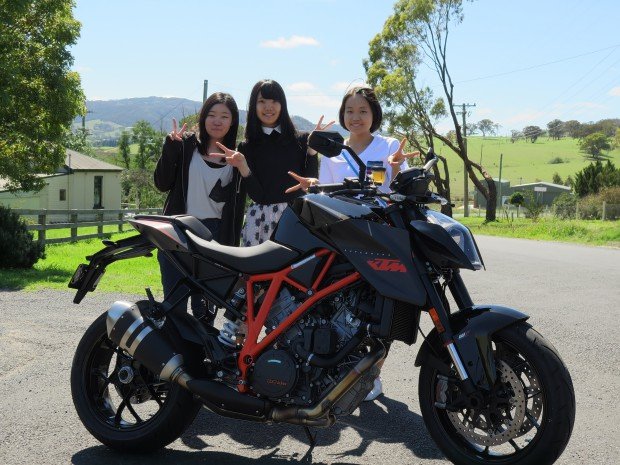 And you thought I was lying about Japanese schoolgirls. 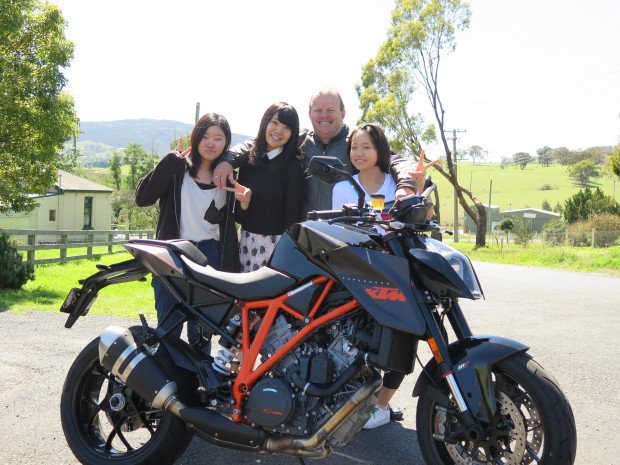 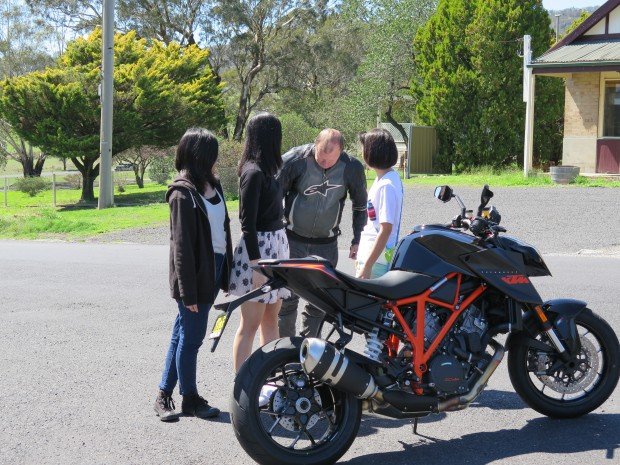 Daz is shamed by the girls into admitting he is afraid of radioactivity. 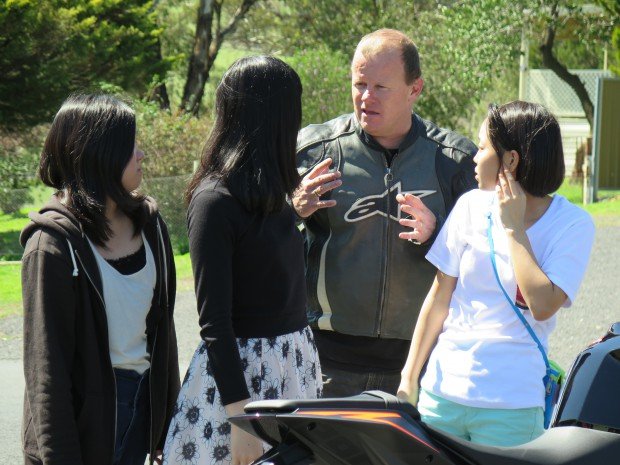 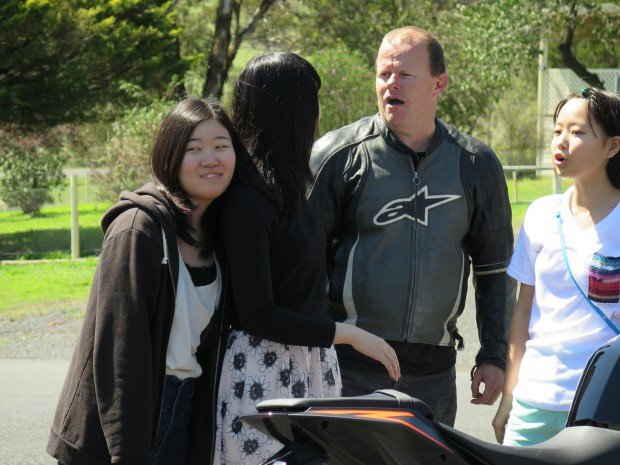 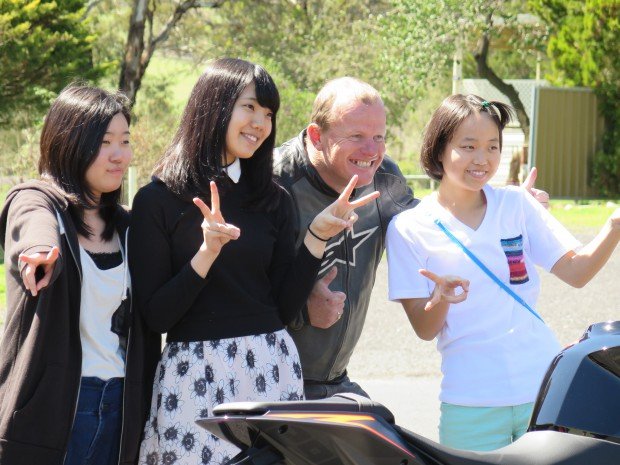 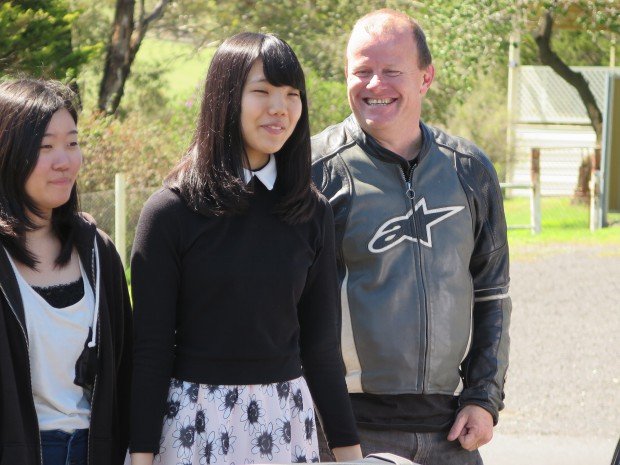 Daz, rightly concerned that they may have been radioactive, asked them if they were from Fukushima, and was relieved to discover they were from Tokyo. Boon and I immediately considered if we should ask the inn-keeper if had any eels or octopi handy.

Then a whole lot of people on cruisers appeared, and one of them had the good grace to crash at the nearby Give Way sign as he was coming to a halt. So while they all waddled about the intersection in various states of despair and confusion, we wove through them and headed for home. 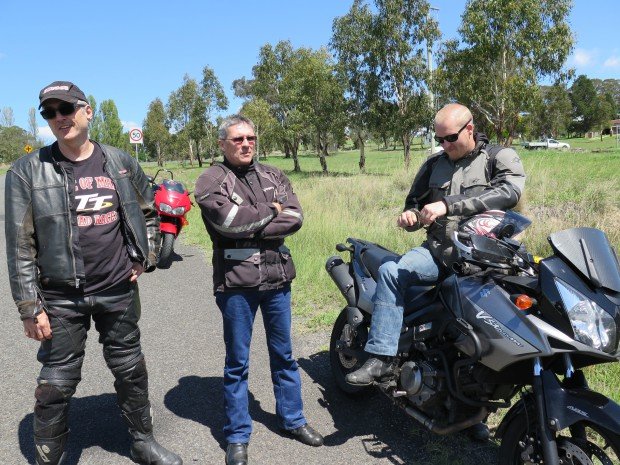 “Have they finished crashing yet?” 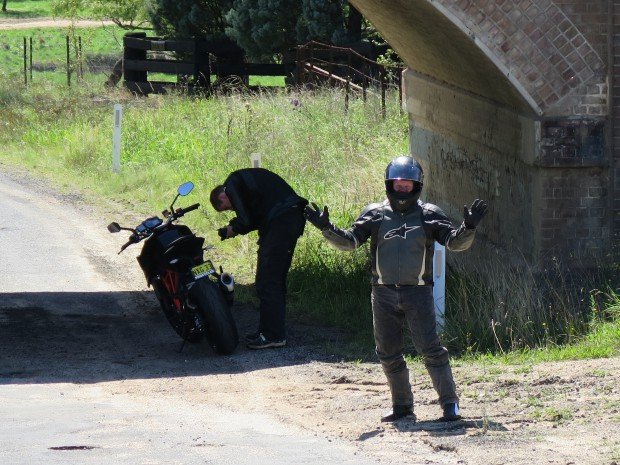 “Bring them girls down here. There are eels!” 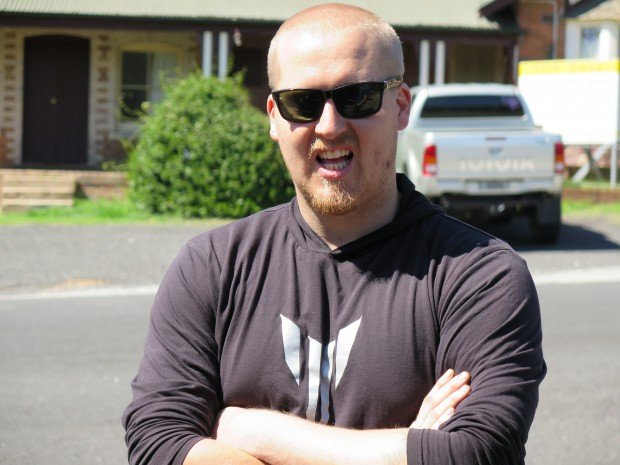 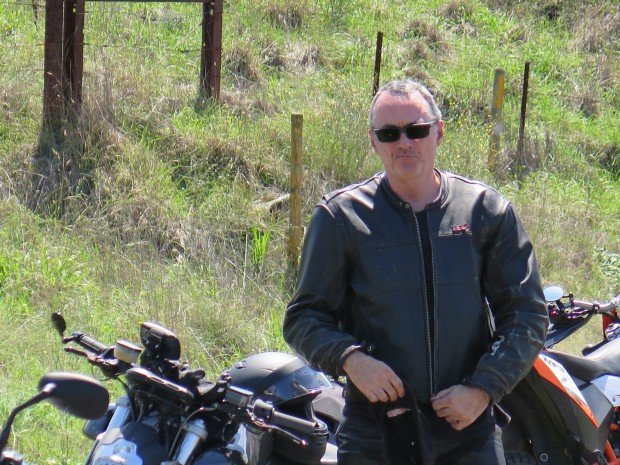 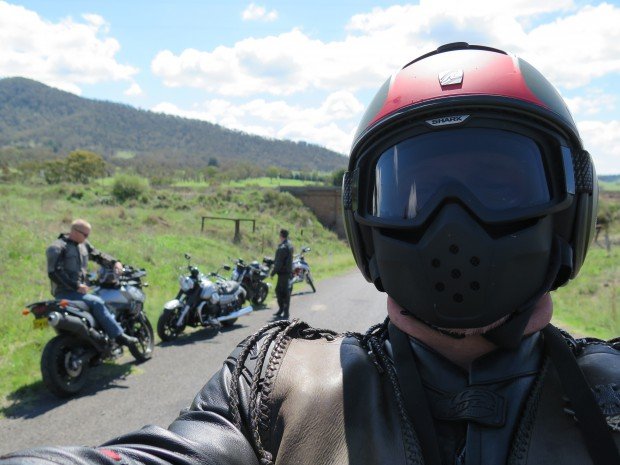 We had discovered that Daz and his KTM 1290 Superduke worked well together – and we put it all on film for you to enjoy as soon as Dan edits it all up.

And we were inordinately pleased the Sunday had provided all that a Sunday really needs to provide – beautiful scenery, great roads, smiling mates, fine meat products, cold beer, mobile chicanes, and Japanese schoolgirls.