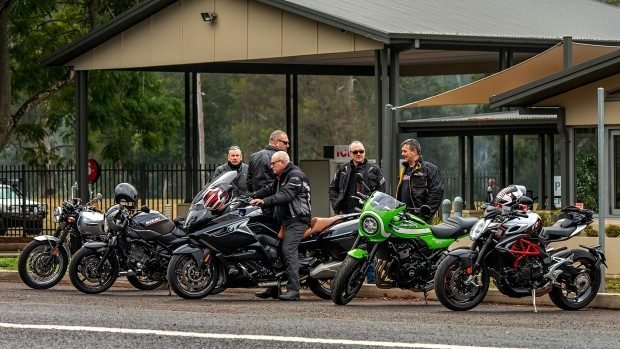 On many Sundays all over the world, people go motorcycle riding. It’s replaced church, and rightly so.
Groups of mates often ride wildly disparate motorcycles in wildly different ways, but they still ride together and remain mates because only mates can laugh at mates and get away with it.
They all have hugely differing views about what constitutes a “good” bike, and often that’s grounded in what they’ve owned before, what they’re riding now, and what they’d like to ride in the future.
These are the people whose views about bikes I am interested in. Real people with real-world skills, whose views are probably more valid than mine, and certainly more valid than the so-called professional motorcycle “journos” who will fellate farm animals if there’s an advertising dollar in it. I have long stopped paying attention to what these motorcycle “journos” (with a very few notable exceptions) think about anything at all. No-one I know even buys bike mags anymore.
I also don’t much care what racers think about bikes and never have. Magazines use racers to review bikes because they think the racer’s name will result in more magazine sales. I must remember to ask them how that’s working out for them.
Racer’s race bikes. Very few ride bikes on the road and all of them are possessed of skills denied to mortals. How can their take on a road bike be of any value to anyone shopping for a road bike? After all, what a bike does in the hands of Valentino Rossi is certainly not what it will do in yours.
With all that in mind, you’ll appreciate this is a bike review unlike any other bike review you’ll have ever read.

I plan to do a heap more of them, much like this, but with sometimes different players. Should be a hell of a ride. 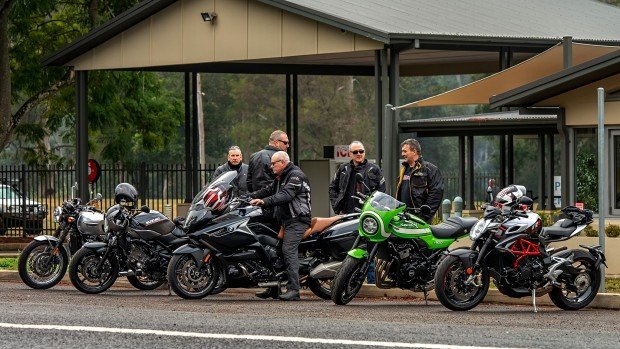 Who came apart from me? Kel, Milenko, Bly and Ed.

Where did we go? Up the Putty a bit. 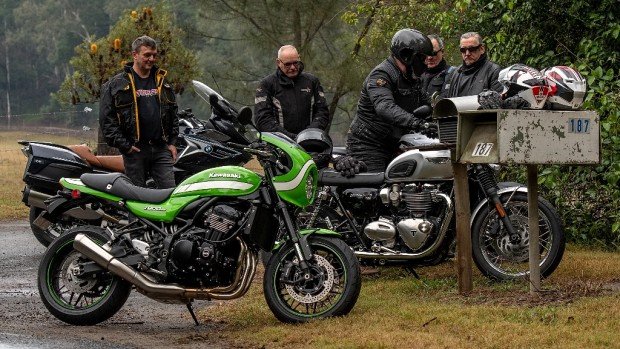 Kel: “The farmer told us to piss off from here.” “Me: “Did you tell him we’re professionals doing important work?” Kel: “Yeah…something like that…sure…” 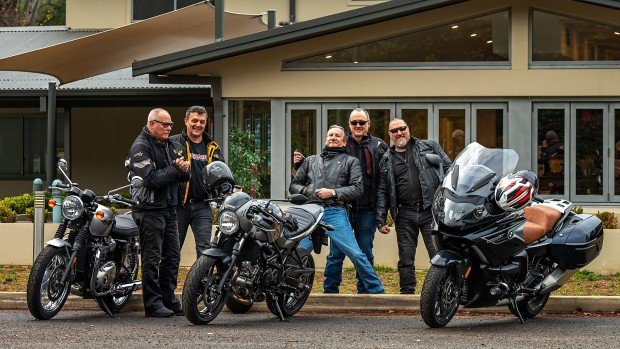 The line starts over there, ladies. Don’t be shy. 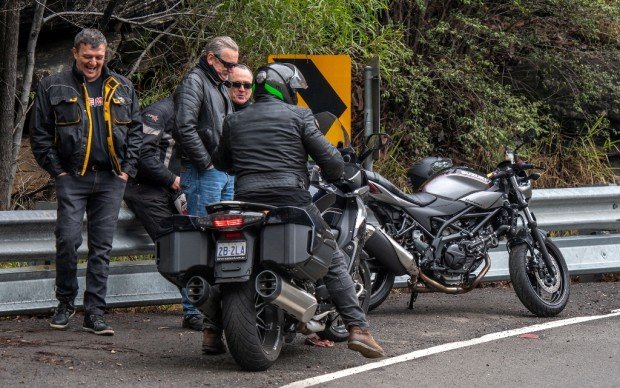 Kel: “I’m going to struggle pulling that out from under the Armco, you know.” Me: “I will keep that in mind.” 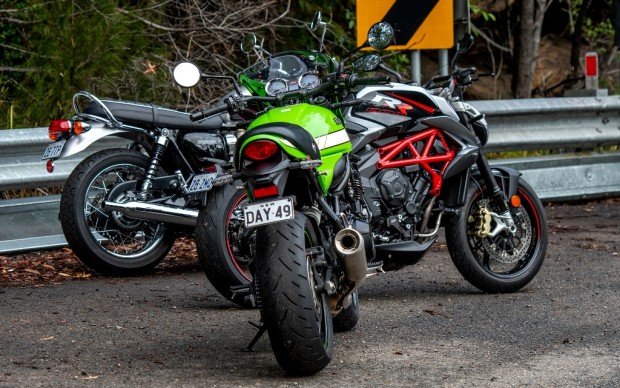 This concept actually began because I needed a favour. I had five bikes that needed to be photographed by Nick Edards, and I was still, after all this time, only able to ride one at a time.
So I called people and they came.
Why wouldn’t they? Riding motorcycles is what my friends do.
And then, even before I asked, they were offering opinions on the bikes and debating among themselves which they would ride first and next.
Elitist, brand-conscious pigs, the lot of them, I decided, as they left me with the SV650X.
The Putty was damp and greasy, but we could all see that. And these were men of vast experience and shallow pockets. None of them wanted to own what they were riding.
I had also explained to them that should the unthinkable happen, it should a) happen after the photos were taken, and b) it had best end in a fatality. Which would then save me the effort of making it so.
This is how we went… 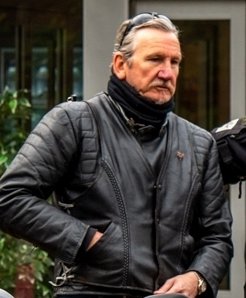 KEL
Demeanour: Cynical, leathery and cruel.
Age: About 280
Normally rides: A Shovelhead he’s rebuilt from scratch, which is just one of many bikes Kel has built, including an MV Brutale, a Kwaka 1300, a Panhead, and a Sportster.
Quote of the ride: “I’m never going to get Botox, I’m just going to wait for the stroke.”
BMW K1600GT: “No. It’s too big. Get away from me.”
Kawasaki Z900RS: “It’s just great…seriously great.”
Suzuki SV650X: “Yeah, nah…it’s hurting me.”
MV Agusta Brutale 800: “It’s terrifying. And uncomfortable. And terrifying.”
Triumph T120 Bonneville: “It reminds me of my old 68 Bonneville and it’s nothing like it at all, and thank Christ it’s not. Love it. Just gorgeous.”

HIS PREFERENCE: The Kawasaki. “It’s sensational. I didn’t think it would be, and I was all about the Bonneville until I rode the Zed.” 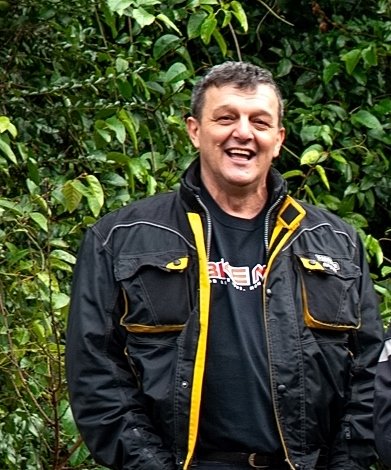 MILENKO
Demeanour: Friendly, affable and Serbian.
Age: I’m thinking early 50s.
Normally rides: The neatest and sweetest Suzuki Bandit I have ever seen.
Quote of the ride: “My back hurts. I have to ride the BMW. All the time.”
BMW K1600GT: “It’s got everything. Everything. Everything. I love it. I love everything about it.”
Kawasaki Z900RS: “I would like to ride this, but my back hurts.”
Suzuki SV650X: “It’s going to hurt my back. I will stay on the BMW.”
MV Agusta Brutale 800: “It will not be like the BMW at all, will it?”
Triumph T120 Bonneville: “My back says no. It only says yes to the BMW.”

HIS PREFERENCE: The BMW 1600GT. “It’s an amazing motorcycle. I cannot believe how good it is.” 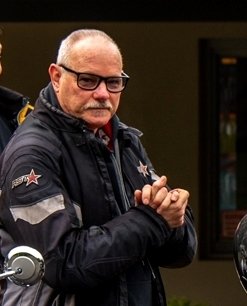 HIS PREFERENCE: The Kawasaki. No doubts. 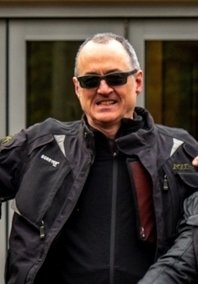 BLY
Demeanour: Owns, builds and rides Ducatis.
Age: Bly’s 3000 years old. No question.
Normally rides: A Ducati Streetfighter and a Ducati Frankenstrada he built in his kitchen.
Quote of the ride: “I wanted to hate it. I really did. But I can’t.”
BMW K1600GT: “It’s a car.”
Kawasaki Z900RS: “I really didn’t want to like it. But it’s just great. Smooth, agile – yeah, a good thing.”
Suzuki SV650X: “It feels a bit gutless, I reckon. Oh, it’s a 650? That’s why then…”
MV Agusta Brutale 800: “It’s angry at everything, isn’t it? If I was 20 again…”
Triumph T120 Bonneville: “It’s beautiful, but I don’t like the fly-by-wire throttle. It feels like it wants to keep going after I’ve told it not to keep going.”

HIS PREFERENCE: The Kawasaki, despite his initial misgivings.

BMW K1600GT: This is the world’s best touring bike. I prefer the Bagger iteration because I can vary the ergos, but other than that, the K1600GT stands head and shoulders above every other touring bike on the market. Nothing this size rides sweeter, handles sharper, or bangs harder. The level of electronics and luxury bits is wonderful. Supreme big-mile comfort that can put the fear of Deutschland into far sportier bikes. 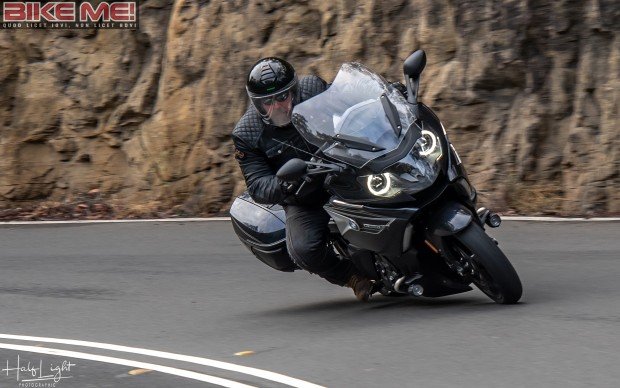 Kawasaki Z900RS: A standing ovation from me. It was not what I expected it to be. At all. A wonderful, poised and surprisingly torque-filled in-line four. Feather-light clutch, comfy ergos, and looks to die for. It’s smooth, handles brilliantly, and is as refined as motorcycle must be in 2018. Kawasaki certainly took no shortcuts making its retro bones here. We quickly worked out the awkward decal on the fairing can be removed with a hair dryer, which I would do, then I would bask in total Seventies pop-green fizziness. This bike deserves every accolade it’s going to get. Bravo, Kawasaki. 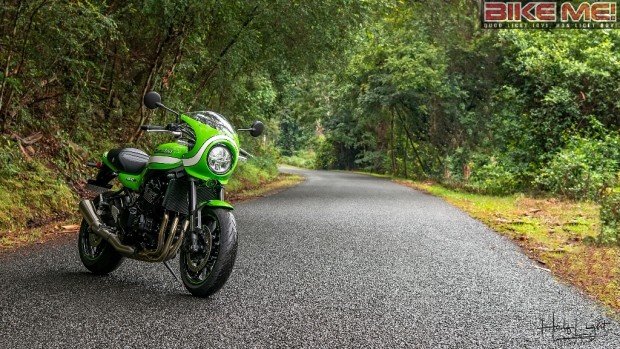 Suzuki SV650X: This is the best-looking SV Suzuki has ever made. It’s just gorgeous. The whole package reminded me of a Ducati Panatah, but without the chocolate crank, the rubbish electrics, the evil riding position, and the legendary non-reliability. This is a Suzuki. It’s made to last. A light, agile twin hewn from simplicity itself, and a real hoot to lash into bends. It’s a bike that will teach you about carrying corner speed if you want to keep up with your mates on the sportsbikes. Pure fun at a crazy good price. 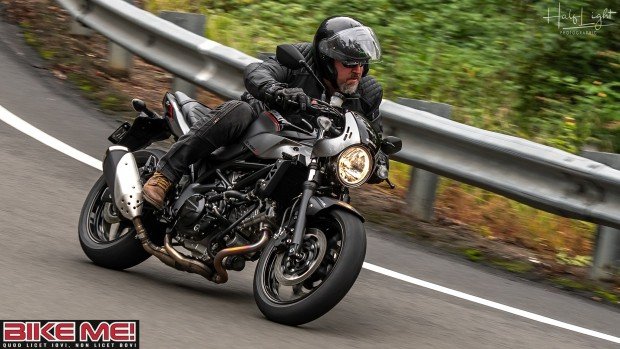 MV Agusta Brutale 800: Still the angriest motorcycle on earth, and one of the most beautiful. Each year MVs get a little more refined and a little more user-friendly, but at their essence they will always be a no-compromise Italian missile. They are not for everybody, and they’re rather proud of that. They are hugely rewarding to ride, provided you’re not expecting a bike that will cosset you, stroke your fur, and pander to your shitness at riding. Bring your A game, pay attention, set your jaw with intent, and ride the MV properly, as the Road Gods intended it to be ridden. Then and only then will you be amazed. 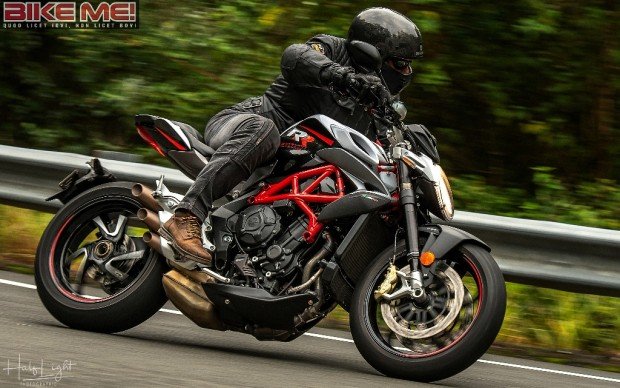 Triumph T120 Bonneville: This is my favourite Bonneville. I prefer this to the Bobber variants, and just quietly, I prefer it to the Thruxton. It reminds me of my old 1979 Tiger, but as Kel (who is also an old Triumph rider) observed, it’s nothing like that old stuff, and that’s great. I’m ever so pleased it’s not like that old stuff. Seriously pretty and beautifully finished, the Bonneville makes me smile to look at it, and it can get along quite well if you put your mind to it and apply yourself. It’s just like the old Bonnys in that regard. They could get along too – you just had to, as I said, apply yourself. But as a gentle, able and benign all-rounder, it really works a treat. 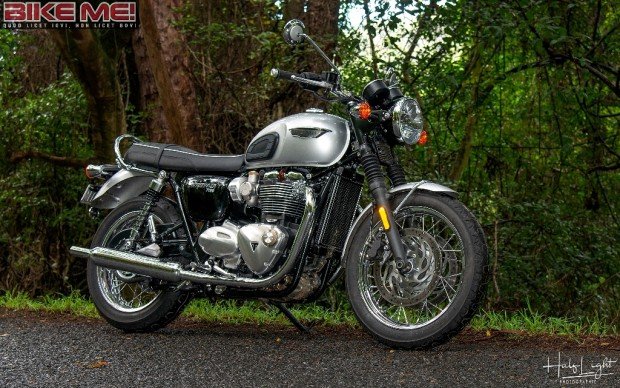