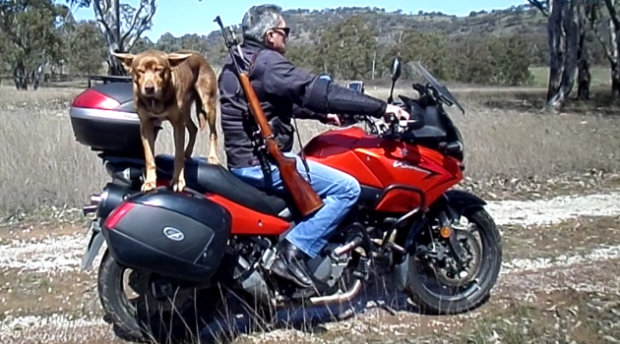 OLDIE BUT A GOLDIE DELIVERED ROADSIDE

The Bureau of Meteorology web site had said Bathurst would be fine and Mudgee would be fine, but it was getting pretty cold a hundred and sixty kilometres out from home at Capertee.

I bought some fuel and put on another layer of clothing and continued on.

Some drops hit my visor. They had ice in them.

The causeways all had water over them. My boots got wet. A pair of wallabies hopped along beside me on a long wet clay stretch, and I was glad they kept their distance, because slowing down was not an option.

I got to Ben’s place around 1500. I was pretty cold. Drinking his Dimple seemed to help, so I did a fair bit of that. Ben came home from work about 1730. He cooked the steaks for dinner out on the grill. We drank wine. “I need a dry windy night to dry out that road”, I told him. “I would not like to ride that again tomorrow.”

We had some more whisky. It started to rain softly.

We went outside to the veranda, and took the bottle, and got drunk on good whisky and played Youtube clips of music to each other. He played King Gizzard and the Lizard Wizard, and I played Half Man Half Biscuit and drunkenly proclaimed Totnes Bickering Fair to be the only love song ever to tell it like it is, and he played Butterfingers.

A light breakfast and plenty of coffee got rid of the slight hangover six hours later, and it was a beautiful day, so we went hunting. We took guns, and motorcycles, and dogs, and had a hell of a time.

“If you go back the way you came,” said Ben, “it’s about thirty five clicks of dirt. If you go via Sallys Flat, it’s eighteen. If you go via Hill End, it’s eight. I’ll come with you in the ute in case you need help wrestling with it on clay.”

We did this. The road was even worse, and the bike went sideways even more. I knew that the road to Hill End was fast and winding, though, and that the road from Hill End to Ilford was faster and more winding, so I was okay with it. We stopped at the end of the dirt so I could say goodbye and put my earplugs in.

“I have to tell you something that happened last week”, said Ben.

‘A woman came in to work and bought some stuff. I got the impression she was a farmer’s wife. She asked me if I would help her load it in the back of her dual cab ute, and I said of course I will. I took out the stuff that was in the tray and loaded it with her new stuff, and I tied it down for her because some of the boxes were pretty big.

“She asked if she should go straight home first or if she could go into town because she had some errands to run. I said ‘No, that load is tied down pretty well. You will be fine going into town. Would you like me to put the stuff that was in the tray on to the back seat for you?’

“She said thanks, and I opened the back door and noticed a set of heavy duty jumper cables on the back seat. I said to her ‘I just noticed your jumper cables. You don’t go into town much, do you?’

“She said okay, so I looked at her and said ‘Don’t start anything.’”

“Any reaction?” I asked.

“I’ve rarely seen a straighter bat played,” he told me.

The road from Mudgee to Hill End is brilliant. Likewise the road from Hill End to Sofala and Ilford. The Castlereagh Highway and Bells Line of Road are pleasant rides. I was home in four hours.

It made me recall William Blake’s quote “Great things are done when men and mountains meet.” Mind you, he also said ”Heaven is in a grain of sand.”