When I first encountered Oggy Knobbs many years ago, I was intrigued.

Why would anyone want to put skateboard wheels on the side of their bike? What’s that all about? How bizarre…

Years passed and I learned many things in that time.

I learned that Oggy Knobbs are one of the best things ever invented where your motorcycle is concerned – and they were invented right here in Australia.

Frank Hajdu is the man who single-handedly worked out a way of saving you thousands of dollars if you lay your bike down, or it gets knocked over in a car-park.

The value of Oggy Knobbs, as far as I am personally concerned, is huge. The Project B-Czar, the Suzuki B-King I did up for AMCN and Suzuki a few years back, was knocked over in my work carpark a week after I had all the carbon-fibre bodywork put on. I came to work to find it lying on its side like the very incarnation of defeat.

That’s it, I thought. It’s smashed to bits. How the hell am I gonna get all those parts replaced? 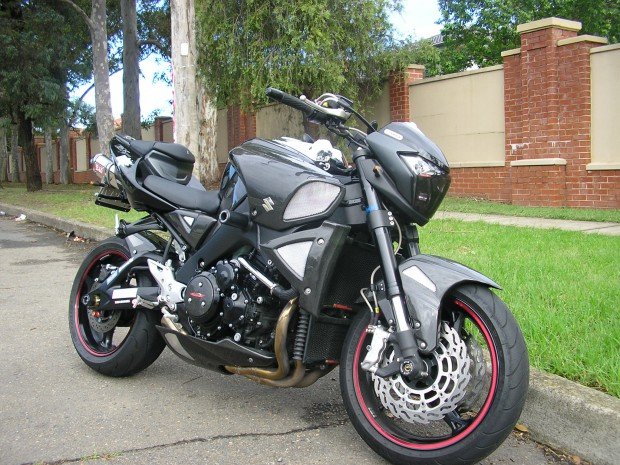 I picked it up and prepared to cry. But there was nothing to cry about. The bike was fitted with Oggy Knobs at the axles and under the tank and it was utterly unmarked. Sure, the right-hand side Oggy Knobb was vaguely scuffed, but the precious mega-dollar carbon-fibre was unmarked.

More recently, I was returning from Windsor with two mates. One, Gonzo, astride some monstrous KTM motard, was doing lengthy monos from each set of lights. Bly, astride his newly whore-up Streetfighter, was not. I was on an F6B, so I certainly wasn’t either.

But Gonzo was – and he was doing really well, until he wasn’t. He pitched the thing over backwards and it slid directly under Bly’s Streetfighter and sent it and Bly crashing to the ground at about 80km/h.

This was certainly a more vigourous ouchy than the static drop that happened in my work car-park.

Once again, Oggy Knobbs saved Bly (or actually Gonzo) from a mega-dollar bill. The bike was rideable and the damage very slight. The pricey bits – the motor, the wheels and the engine covers and front end were unmarked.

Are Oggy Knobbs a good thing?

They are far more than that – they are a bloody essential thing.

Thus enamoured of them and educated in the way of them, I asked my brother, Uncle, to venture into the wilds of Williamstown, speak to Frank about Oggy Knobbs and maybe take some pictures of how this miraculous Australian product is made.

This is what he reported…

“You cut your grass with a Victa and dry your riding apparel on a Hills Hoist. It’s the Australian thing to do.

But when it comes to shielding your beloved motorcycle from road rash, did you know that you can also shop locally?

Oggy Knobbs are made by Promoto right here in Australia.

In Williamstown, on the outskirts of Melbourne.

Frank Hadju started the company back 1998, with the first set made/designed for the GSX-R750 to protect the important parts of the bike in the event of a fall. Rumour has it the idea came from the insane world of Japanese endurance racing where competitors had fitted skateboard wheels to the bikes’ extremities to protect levers, radiators and engine casings.

And so Oggy Knobbs were born. 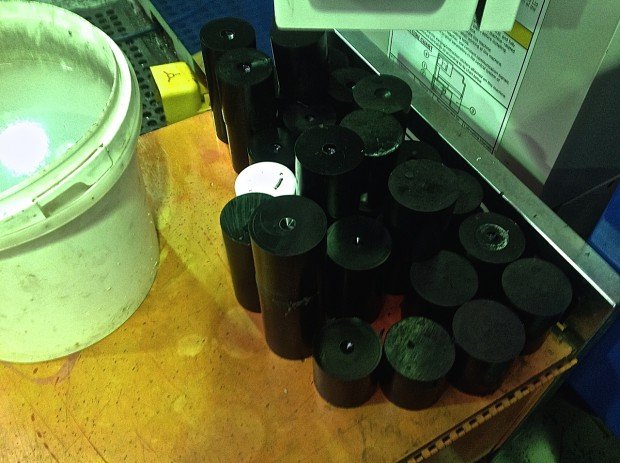 Before they have been beautified.

The idea of relatively unobtrusive crash-protection caught on and before long Promoto had developed a range of sliders for race and road bikes.

Then the new millennium saw the advent of those sexy underseat exhaust systems. Without an exhaust to take some of the abrasion in a fall, the result was damaged swing arms, fork legs and calipers. All very big dollar items.

Thus Axle Oggys were developed to bolt straight through the axle and protect these expensive buggers. 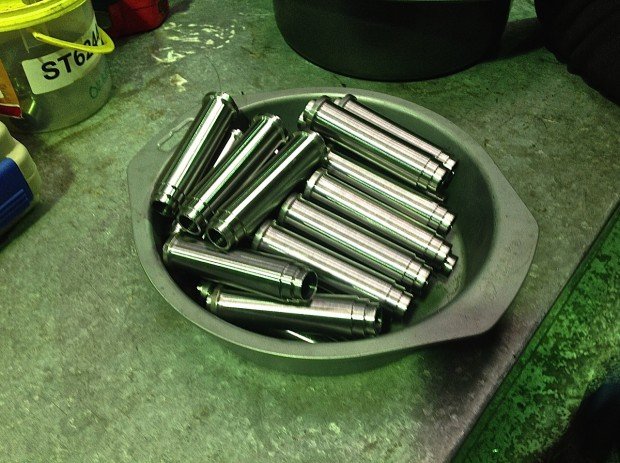 No, they are not rounds for death-cannon.

So we know they work. But why do they work so well?

Because they are beautifully made.

You can almost taste the quality and workmanship at the production facility. I was there. The finest materials are used at every point in the production process. The process is meticulous and the operation is almost personal.

Frank can spend up to 200 man-hours designing a kit for a new bike and often has to call upon contacts in dealerships to access new models. All the mounting kits are individually designed, laser cut and shaped in-house. Frank regaled me with design considerations, coefficients of pre-tensile strengths, shear angles, super-plastics, etc. I did not understand all of what was said, but I knew Frank did and that was reassuring. 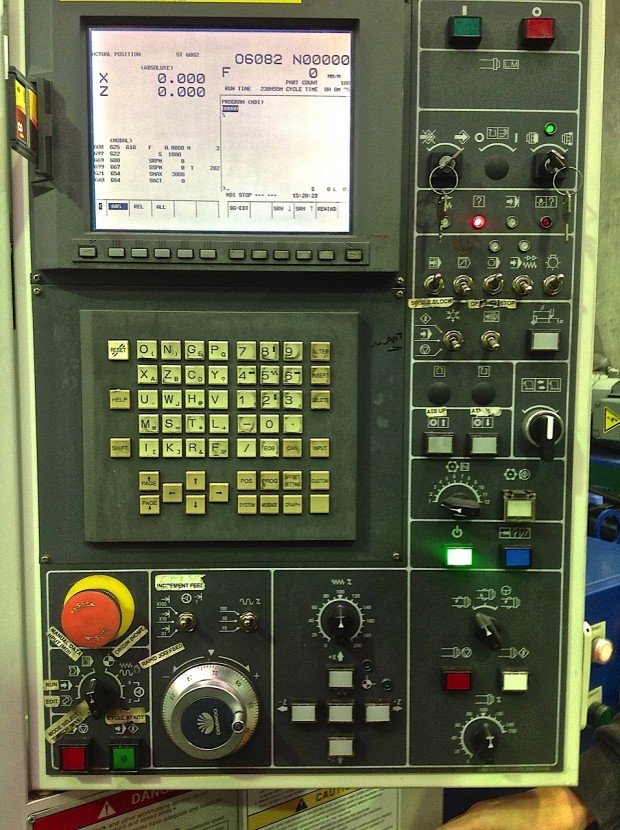 The electronic brain that tells Oggy Knobbs how to become Oggy Knobbs.

And it really is all state-of-the-art stuff. Laser-cutting, robotic MIG welding and CNC machining ensure your model-specific Oggy Knob will fit perfectly.

All the brackets are a high-tensile steel alloy, as are the bolts which have also been de-embrittled, zinc-plated and clear-chromated for great strength and minimal weight.

The plastic used in the sliders is called Acetal, which is renowned for its phenomenal durability and abrasion resistance.

Every component in an Oggy Knobb is top-shelf. 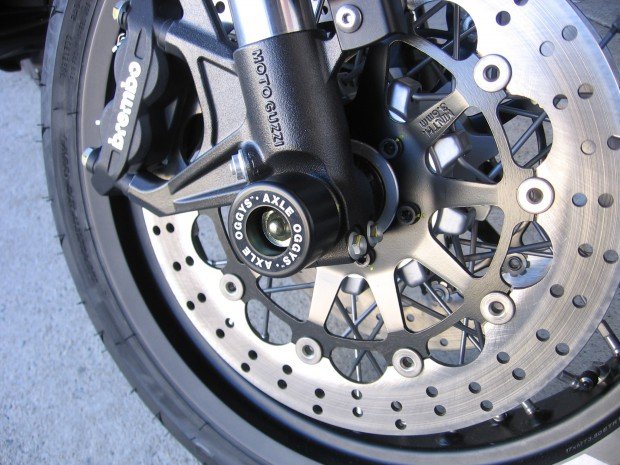 Cheaper than replacing all the stuff behind it.

Sure, you can get cheaper knock-off imitations of Oggy Knobbs on-line. But be assured they are more often just decorative rather than functional and are made by someone in China who has never even seen a motorcycle. In most cases you’d be better off with skateboard wheels and BluTak. The bitter taste of poor workmanship lasts much longer than the sweetness of a bargain.

Promoto makes a great product. It creates it locally and it does it superbly well. I saw how it was made and I met the man who designs and makes the actual Oggy Knobb. He and his product have saved its buyers millions of dollars. Just remember that the next time you’re wondering if buying Oggy Knobbs is “worth it”.”