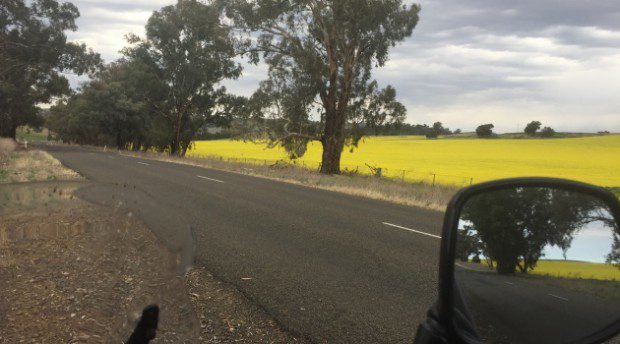 Canowindra was redolent with history, and it was my type of history. In October 1863, the bushranger Ben Hall’s gang took over the village for three days, herded the whole population and a few passers-through into the inn, and “entertained” them.

I bet it was hilarious.

In September 2017, I rode in to the town on a Sunday, strode manfully up to the door of the Royal Hotel, and pushed it. It was locked.

I got back on my bike and rode a hundred or so metres down to the Canowindra Hotel. It wasn’t locked.

I asked if I could get lunch. The bartender said here’s the menu, and the special for today is lamb cutlets. I was cold. I asked if he had red wine, and ordered a glass of merlot. He filled it right to the brim. “You pour a generous glass of wine, friend”, I told him. “How many coppers are there in this town?”

“None working today” he said happily, so I ordered the cutlets, paid, and sat down with my wine. “This is a comfy town”, I thought.

It had appeared that way on the way in. The sheep were freshly shorn and there were lambs in the flocks, the cattle looked fat and delicious, and the canola and lucerne painted the fields in patriotic colours.

The cutlets were spectacular. “Where do you get your cutlets?” I asked the bartender. “They don’t taste like the ones from Coles at Neutral Bay.”

“Ah,” he said, “the butcher’s changed hands. One of the local sheep farmers bought it. He kills his own.”

I’m thinking he doesn’t pump his meat with water like the supermarkets do either.

I called Bly when I got back. “We used to go for a day ride once a month”, I said. “Let’s do it again. Come to my place 0800 Sunday, and we will go to Canowindra for cutlets.”

The state government had put on a double demerits weekend for us. The police had set up a big roadblock at Lithgow to do random breath tests. It was inconvenient, and the one administering the test to me wanted to be a human being and chat, and asked where we were going. I lied to him. “Nice”, he said. “Ride safe.”

We didn’t, of course. We got to those secret lonely roads and rode really fast. I scraped the bash plate on the V-Strom on the road twice in corners. That thing’s going to have to come off.

The bartender at the pub said the cutlets were still on, so we had them for lunch. I asked if the town cops had every Sunday off, and he said “Yep.”

Some local guy stopped by our table and wanted to chat. He said the town wasn’t as comfy as it looked, because the late rains didn’t happen. He was going to rip out a barley crop and turn it into cattle feed. Then he was going to buy some cheap cattle from up north where they’re in drought, and fatten them on the barley, and sell them. “You can get a cow with calf for a thousand dollars”, he told me. “Last year it was two thousand.”

“Those were good cutlets”, said Bly a little later.

“I’m not that interested in fish fossils”, said Bly.

So we swapped bikes, and I rode the Homostrada to Orange while he rode my DL. We filled our tanks and I made him follow me on the way out, and showed him the Icely Road route to Bathurst. It’s winding and wonderfully scenic.

The rest of the family had gone to the in-law’s place for lunch, so I dropped in on the way home. My hair looked funny and there were bugs dying on my jacket. Everyone said hi Al, where have you been, and I said Canowindra.

“What did you go THERE for?”

“To eat lamb cutlets”, I told them.

“Why did you go three hundred kilometres to eat lamb cutlets?”

They seemed okay with that.