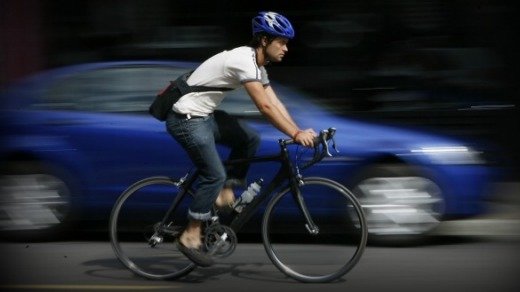 NO, THE GOVERNMENT WILL NOT REPEAL THE BICYCLE OVERTAKING LAW

There is little doubt a percentage of motorcyclists, lobbyists and media do not have a good grasp of the road rules. Those pesky regulations, which largely keep all road users safe, are somehow the target of scathing criticism, as though the rules themselves (or anything other than the rider) are to blame when a crash occurs.

Some riders confuse the speed limit with the recommended pace (hint, it’s a maximum lawful limit, not a safety guideline), or think a right of way means they can proceed merrily into the path of an oncoming vehicle because, well, right of way.

As unfortunate as it may be for those who attempt to offload personal responsibility, the road rules, as a set of practical standards for motorist behaviour, are very rarely the problem. When a crash occurs, it is practically always the fault of a human.

So what does this have to do with the newly introduced bicycle overtaking law? Pretty much everything, in fact.

A growing number of motorcyclists are calling for the repeal of a law which allows motorists to cross the centreline to overtake cyclists, provided it is safe to do so. The law exists in various forms in New South Wales, Queensland, Tasmania, South Australia and the ACT.

Those calling for a repeal of the laws may be noble-minded and motivated by a desire to keep their fellow riders ‘safe’. They probably think they are doing all motorcyclists a favour by speaking up and calling for a return to the days of old.

But those who have thrown themselves behind the campaign are misinformed. They are providing the perfect ammunition for government road safety departments to declare motorcyclists to not only be incompetent, but a danger to themselves and everyone else on the road.

While collective heads snap back in surprise, the reasoning is obvious.

Criticisms of the overtaking law centre around the fact motorcyclists believe other road users to be incapable of complying with or understanding what ‘safe to do so’ means, and this puts motorcyclists at risk of being involved in a crash.

Spelled out plainly, the new laws (which are now several years old in some states), allow the following to occur:

When a road user comes upon a cyclist travelling at a speed most likely to be substantially below the speed limit, rather than sit impatiently behind it while wallowing in seething frustration until an overtaking lane or markings appear, the driver or rider may use their discretion and IF SAFE TO DO SO, pass the cyclists by travelling over the centre line.

The reason this has caused so much indignation among some motorcyclists is two-fold:

Despite the proviso that a manoeuvre be only undertaken if ‘safe to do so’ being a component of many existing road rules, the proponents have decided the ordinary, reasonable person (which astonishingly, the vast majority of motorists are), just won’t get it.

The practical meaning of the requirement is simple: ‘What a reasonable person understands as safe’.

And this depends entirely on the specific circumstances at the time. It cannot be further defined or clarified by law, and it would be potentially dangerous to do so.

The general risk-averse motorist, being as keen as their neighbour to complete their journey safely, has a very good understanding of what ‘safe to do so’ means in the context of driving. They are required to make that judgement every time they give way, turn across a lane, overtake, merge, or any other number of standard practices on the road.

For campaigners to either ignore the ‘safe to do so’ requirement of the law, or assert other motorists won’t understand it is disingenuous, and completely slashes any credibility in the campaign.

It implies these motorcyclists probably do not understand the road rules or legal obligations themselves, and have no concept of how to assess risk and take action accordingly. It reeks of anti-everyone-else, special-needs rhetoric, rather than a ‘safety campaign’.

The second misconception is that legally allowing a vehicle to cross the centreline WHEN SAFE TO DO SO in order to pass cyclists puts motorcyclist at unnecessary risk of head-on collisions.

Motorcyclists love to hate on other road users. The car is the natural enemy. Trucks, caravans and buses are even worse. Lumped in with cyclists as ‘vulnerable road users’, many riders hate that bicycle riders favour windy, scenic routes and get in the way of a rumble through the countryside.

But asserting that the road rule somehow puts motorcyclists at greater risk is absurd.

The real world is full of the unexpected. A rider who supposes that there will be no other vehicle in its path simply because of the presence of double or continuous centre lines has no place on the road.

A competent motorcyclist never assumes that a road is clear and that safe passage is guaranteed.

A competent motorcyclist expects a hazard to be around every corner and focuses his or her gaze as far into the distance as possible to anticipate any possible interference in the ride.

A rider with even the slightest bit of sense should understand that any number of unexpected circumstances may arise.

Before the anti-cycling brigade starts mewling about special treatment for cyclists; no, cyclists won’t be banned from roads, no, bicycles won’t ever require registration, and no, the governments won’t repeal laws which decrease driver frustration and consequent incidences of road rage.

The law is sensible and practical and benefits everyone. It allows riders to legally overtake a peloton without fearing a vendetta being launched against them with dashcam evidence and a knock on the door by an unfriendly policeman.

It reduces the likelihood of conga-lines of angry drivers fuming at the inconvenience until someone cracks and makes a dash for freedom into an oncoming truck. It reduces the length of time the odd vehicle will spend on the wrong side of the road if they attempt a risky, multiple vehicle overtake.

Most road users are not incompetent buffoons and will not knowingly put themselves and anyone else in danger. But when a crash occurs, regardless of who is legally at fault, the motorcyclist will always come off worse. A competent motorcyclist recognises this and rides accordingly, regardless of the law.

The majority of drivers will play it safe, and motorists who overtake with careless abandon will do so anyway, regardless of whether or not the law has changed.