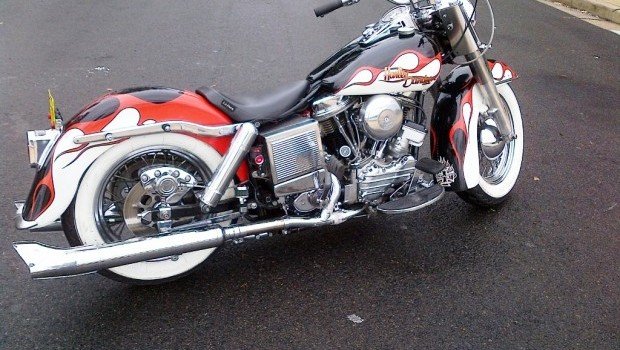 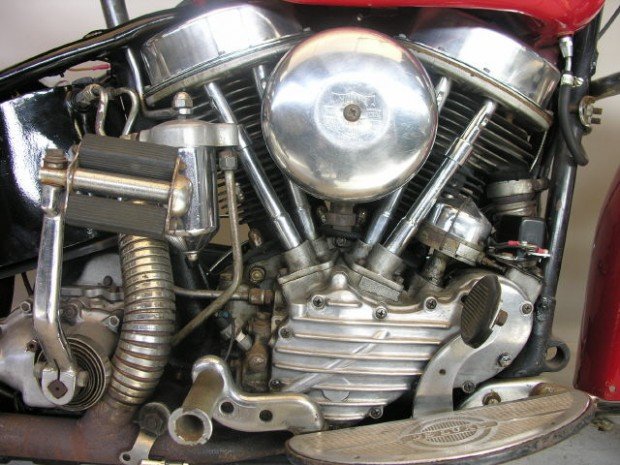 This is the motor as it arrived at Kel’s house

My mate Kel is one of the greatest blokes I know. His passion for motorcycles inspires me, his dedication to lost causes uplifts me, and his commitment to living life on his own terms is as unwavering as a steel bar set in concrete.

His company delights me in many ways. He is a lean and angular Old School biker seemingly hewn from angry stone, iron opinion and chunks of well-weathered hate-wood.

It’s like finding a living, leathery Tyrannosaurus who smokes bastard menthol cigarettes while necking schooners and laughing at what the world has become.

I guess our old dinosaur bones kinda thrum along at the same frequency, so it’s richly ironic we found each other on the Internet and not in one of the many pubs, clubhouses, and bike shows we both frequented a generation ago. Or maybe we did, but the drugs were really good back then and it’s possible we could have forgotten.

Anyway, now and again, and not often enough, Kel and I get together and shoot the shit. 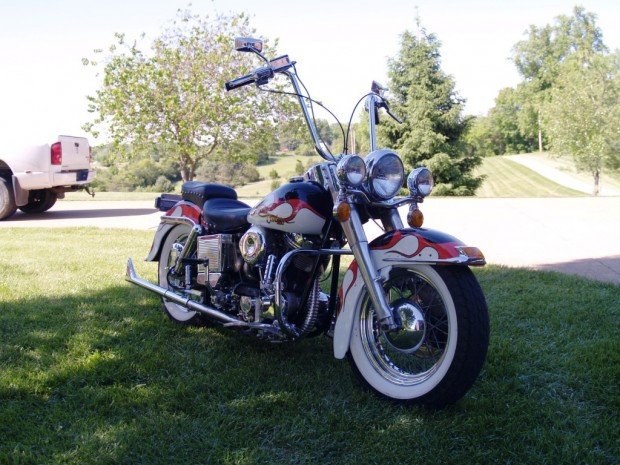 And this is the complete bike awaiting shipping to Australia

Not long ago, he and I were shooting this shit in his local and I was lamenting my never-ending struggle kicking the evil durries.

“I fucken love ’em,” Kel grated at my simpering weakness. “I’d eat the fucken things if I could.”

The last time he made me feel like a mewling child was when he rode into Sofala in the dead of winter, armed only with an old grey army blanket and a bottle of cheap liquor, and beheld with appropriate contempt the efforts of lesser men struggling to erect alpine tents and lay out thermal sleeping bags. That evening, as Kel snored happily on the permafrost some 20 metres from the blazing bonfire we had lit to stave off ice-death, his thin blanket barely covering his alcohol-impregnated awesomeness, I somehow managed to shunt him nearer to the fire. I have no idea if it made any difference, but he was alive and hale the next morning. 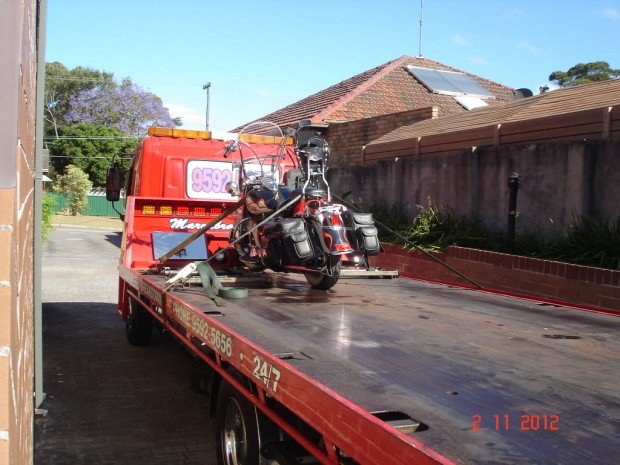 The Panhead arrives at Kel’s place

Kel recently divested himself of his beloved Sportster. It was a bike he had been customising, refining and perfecting for several years, and to be honest, it was one of the finest examples of a late model Sporty I had ever seen. A level of OCD-like insanity had caused Kel to modify everything on the bike, often several times over, and produced a subtle, but altogether stunning motorcycle. I never thought he’d sell it, but he did.

“To some fucken bastard without a fucken clue,” as he explained it to me. “But his money spends as well as anyone’s.”

And spend it he then did. On a 1965 Panhead he found in Wildwood, Missouri, while searching for his next project on the Internet one evening.

Kel was of the view that, “It was a bit rough, but had potential”, and set the wheels in motion for getting the bike from Missouri to Sydney. And he did alright for a bloke who’d never imported anything this substantial in Australia.

The greatest hurdle was, of course, our own incredulous bureaucrats. They had no idea what they were up against. This Panhead was being imported to Sydney. There was never any doubt. 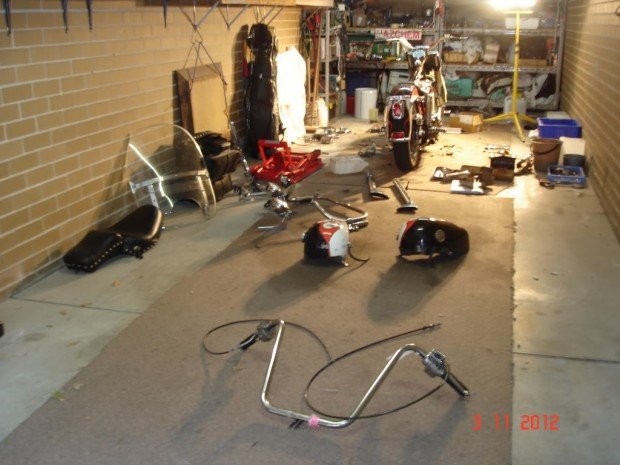 “After a bit of fucking around with these cunts (Department of Infrastructure and Transport) who didn’t believe I wanted to import an old heap of shit, I had the approval in my hand.”

The bike then made its way to Vegas, where a mutual friend got it on a ship at Long Beach and after a few weeks of bobbing about in the Pacific, Kel had his white-wall-tyred, white-and-black-with-red-flames Panhead, with apies, FL lights, and an engine and gearbox brimming with vindictive spite.

Which I think is precisely what Kel wanted. It is what a man of his gravitas would insist upon, so that he could measure himself against it, stomp it into submission and emerge victorious astride, as he put it, “a totally Old School, run all day, fast as fuck, best bitsa bike!”

But before he could ride that, he had to fight the good fight. That Panhead was not going to just roll over and let him rub its oily Yankee belly. It was going to test him and gnaw on him and break his great big heart a few times.

And so it did. 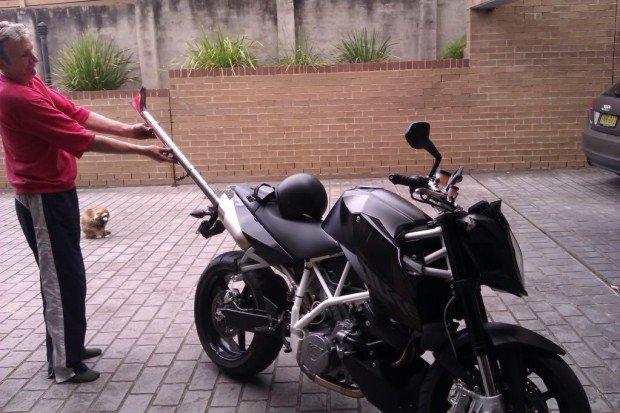 But Kel was fortified and ready for it. Sure, to a casual observer Kel slouching about his garage in slippers with a durrie hanging out of his mouth, muttering curses, leafing through manuals and opening boxes of parts, might have looked a little frightening. But I was not scared. I knew what I was looking at. I was looking at a man in slippers holding a spanner, not a mechanic or an engineer, but just a bloke with a demonic determination to sort his Panhead, get it running, get it oil-tight (as much as that is humanly possible), take it riding and watch the bitches fizzing in their panties over the finished product.

And he did just that. It took a few months. These things never have a time limit. But he did it.

And he holds it to be one of the best and most fulfilling things he has ever done.

“I fucken loved it!” he said to me after first calling me foul and hurtful names because I had inadvertently bought him a middy rather than a schooner.

His happiness and self-satisfaction was literally palpable. The man had achieved. Had he summited Everest barefoot, his nude body covered in yak-grease, he could not have been cheerier or more proud. 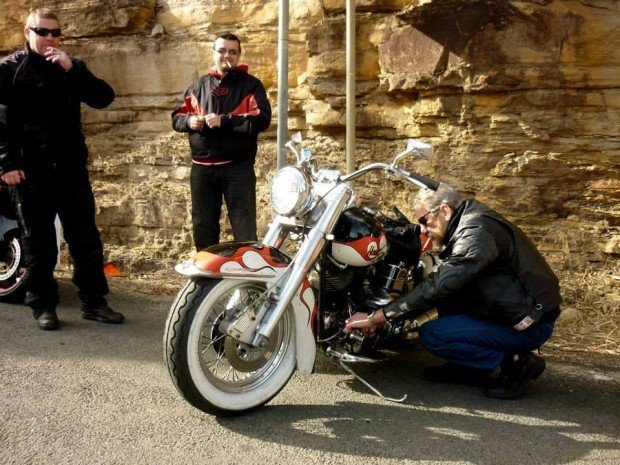 Kel makes a few adjustments on a shakedown run. Swearing is not shown

The Panhead had been out on several runs and had proved to be solid.

Sure, at some stage in the near future it will shit itself catastrophically, for such is the nature of old bikes.

Kel knows this, and stands, immutable, like a rock.

The Panhead is invited to bring it.

Kel is equal to the challenge.

I would imagine there isn’t a challenge Kel is not equal to. 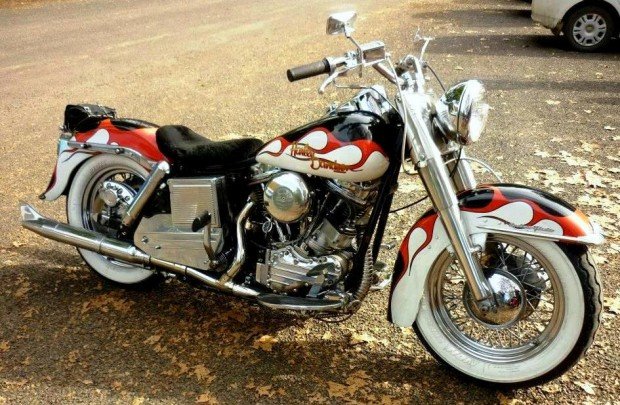