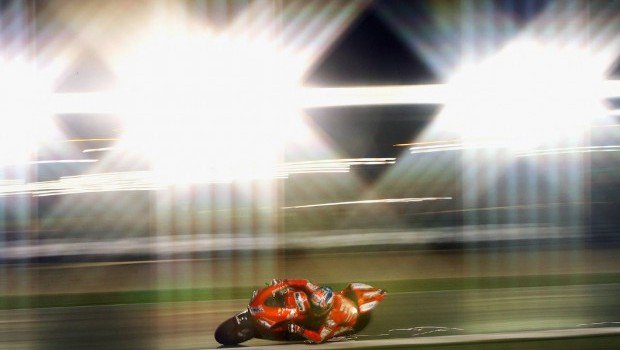 As MotoGP season 2014 warms up, one thing is clear. The battle for the MotoGP World Championship will be fought exclusively by Spanish protagonists and will take the intensity of motorcycle racing to a new level.

While Valentino Rossi and Stephan Bradl will provide a little cultural diversity, the bulk of the silverware in 2014 will be divided between Marquez, Lorenzo, Pedrosa, Bautista, and the brothers Espargaro.

Within the multitude of battles spread across the MotoGP field over 18 rounds of the championship, the war itself will be a resumption of the 2013 competition between Mark Marquez and Jorge Lorenzo. Despite a long, cold European winter, that conflict will continue with renewed heat. 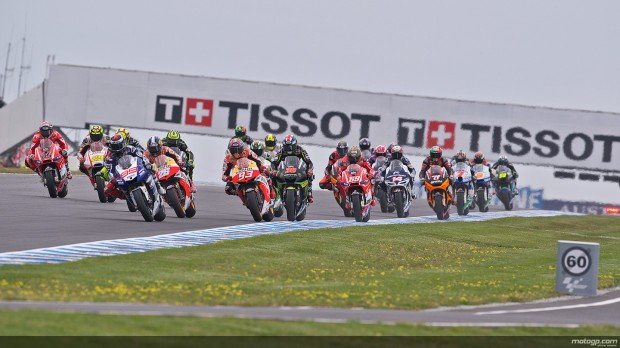 If 2013 was a learning year for Marc Marquez, 2014 will be a spectacle like no other. He gave his opponents a head-start at the beginning of last season as he familiarised himself with the RC213V and learned the tracks at MotoGP pace. The only level playing field was the new Circuit Of The Americas in Texas, where no one had raced before. Marquez topped every session and was never challenged on his way to winning the race. Then he backed that up at the only other circuit he hadn’t raced on, Laguna Seca, where he spectacularly passed Valentino Rossi to win. Breaking his leg last month is the only hurdle to him resuming his dominance over the field, and no doubt his Repsol Honda paymasters have discouraged any further dirtbike shenanigans from their superstar. 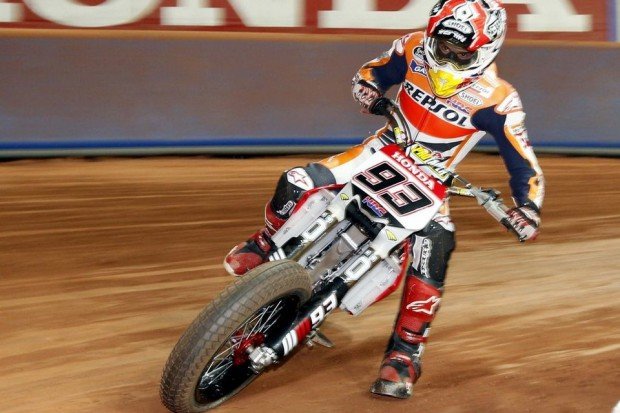 Jorge Lorenzo reached a new level of competitiveness in defending his title in the final rounds of 2013, and will hit the track this year in Qatar even more invigorated as he fights not only to regain his crown, but to establish his legacy as one of the greats of the sport. Nobody works as hard to promote their image as Lorenzo, and being beaten by a rookie wasn’t pleasant for him. He’ll be determined that it isn’t repeated this year. That determination provided a glimpse of Nasty Jorge by the end of last season, as the man who’s traditionally been the greatest critic of the riding standards of others, showed he was prepared to abandon his own standards, and make contact when it suited his needs. Pre-season testing has been an interesting indicator of his Lorenzo’s form, most notably in what we haven’t seen from him, as he kept himself away from the top of the timesheets. There is simply no way Lorenzo is that far off the pace, and given his meticulous preparation through practice and qualifying sessions, there’s no doubt he and the Yamaha team have scrutinised every byte of data from the bike, and every sector time on the track. But Jorge is keeping his cards very close to his chest and deliberately hasn’t put his best laps down yet. 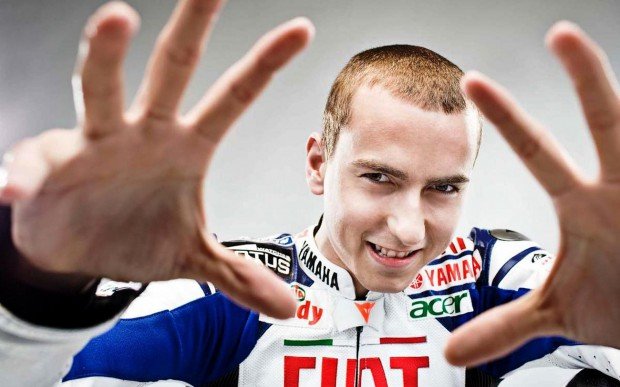 “This is the size of my left testicle alone. The right one is even bigger.”

Dani Pedrosa will be at the front regularly, and occasionally he’ll shine. But he won’t be consistent enough to be in contention for the big trophy that’s handed out in November. Forget injury, forget bad luck. Forget the statistics Alberto Puig uses to defend Pedrosa from criticism. There will always be races like Laguna Seca in 2013 where Pedrosa isn’t fast enough to complete with the real contenders, or makes unforced errors, and the championship will again slip away from him. Barring another significant injury to Marquez, its unlikely Pedrosa will be able to match his freakishly talented younger team mate, and 2014 could well be his last roll of the dice for the world championship. 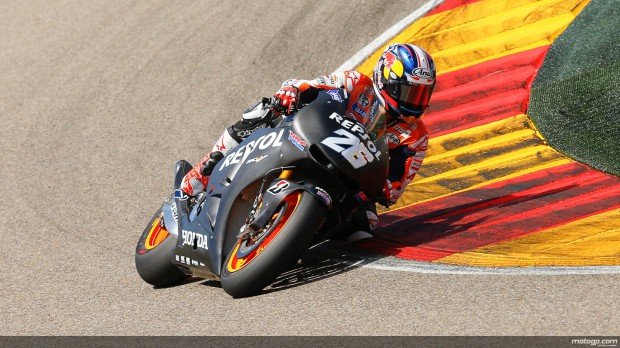 Dani has his best bridesmaid’s outfit on again. 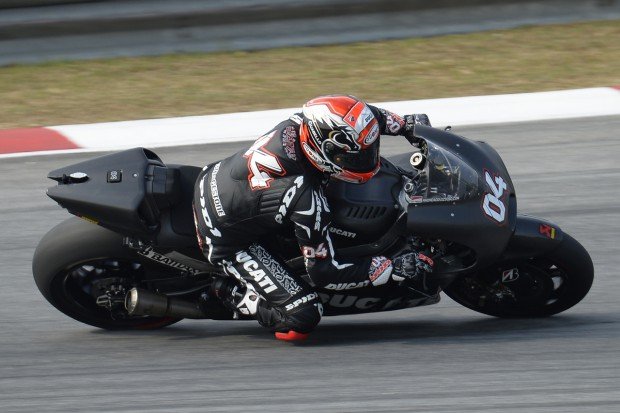 Valentino Rossi will still draw the crowds, but his results are unlikely to maintain him at the top of the championship table. 2013 bought him a victory and handful of podiums, which is respectable by anyone’s standards, except Valentino Rossi’s. His pre-season testing results have been encouraging; generally at the top of the timesheets, and always outpacing teammate Lorenzo, but it’s difficult to see those performances as being different from his 2013 efforts, where he was consistently among the quickest in Free Practice sessions, but fell back when everyone else lifted in Qualifying, and was unable to maintain the pace of his team-mate and the Repsol duo across race distance. 2014 is likely to be his swansong, at least on a factory bike. That’s all the more reason to take your kids to a GP this year to see the old master, for there will never be another Valentino Rossi. 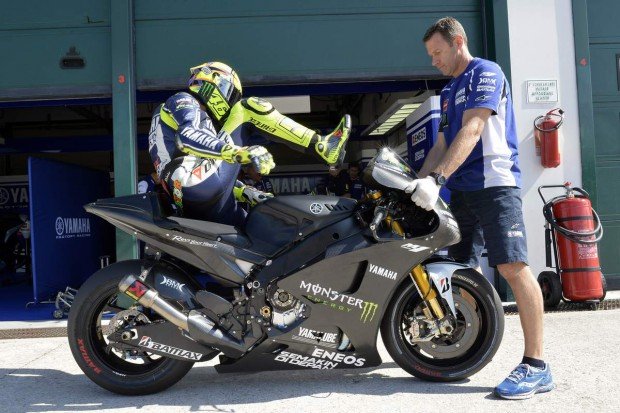 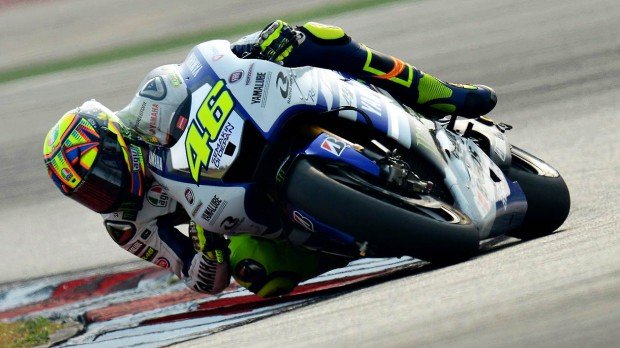 As with every great battle throughout history, weaponry will be crucial. In this respect, early indications have been that the might of Honda has produced a machine that will perform better over race distance than the Yamaha. But until the chequered flag drops at Qatar, that remains conjecture. This championship will be so closely fought that if Yamaha has to play catch up at all, the championship will get away from it. The X-factor in this equation is the governing body’s needless interfering with the technical regulations, and the subsequent creation of ‘Open’ and ‘Factory’ categories. No stranger to farcical situations, Dorna has this year engineered the farcical situation where teams operating under different technical regulations, fuel and tyre allocations, will compete for the same championship. Ezpaleta logic has determined that the best way to have a level playing field is to create separate playing fields, with different rules, which creates the ludicrous scenario where teams and manufacturers get to choose which set of technical regulations they want to operate under. For an indication of the direction Dorna is taking MotoGP, peer over the fence at the Formula 1 circus, and see what unnecessary intervention from over-zealous administrators can do to a sport.

Ducati’s decision to forego their proprietary ECU software to take advantage of the additional fuel and tyres available to Open Class teams will demonstrate the impact of those regulation changes. It will also prove whether Cal Crutchlow did indeed commit career suicide by switching to the red bike, and whether Andrea Dovizioso is still capable of running at the front of a MotoGP field. Regardless, their rivalry as team mates on the Tech 3 bikes in 2012 were great for the spectator, and their reunion in 2014 will provide more of that. Wherebouts that battle is waged in relation to the rest of the field remains to be seen. 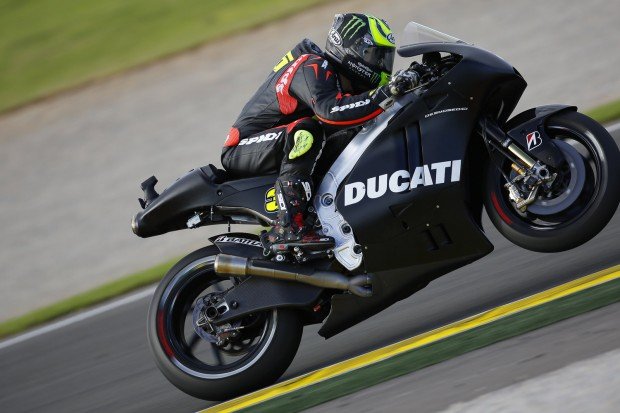 The softer tyres and additional fuel afforded by the Open regulations will also give Aleix Espargaro the chance to shine, and shine he will. He’ll keep the guys on more expensive machinery honest, and when the music stops and 2015 seats become available, Aleix will be headhunted and should get the ride he deserves. His performances in 2013 justified a promotion, but cruel irony saw his younger brother get the only available prototype bike, the Tech 3 Yamaha.

It is highly unlikely Espargaro the Younger will disappoint on said Tech 3 bike. The latest product of the Spanish motorcycle racing system to graduate, Pol will be fast from the very start, and will be pressing hard to graduate to a factory team next year. Between them, the brothers Espargaro will make both Honda and Yamaha reassess their allegiance to Pedrosa and Rossi, and no doubt they both feature high on Suzuki’s shopping list for 2015. 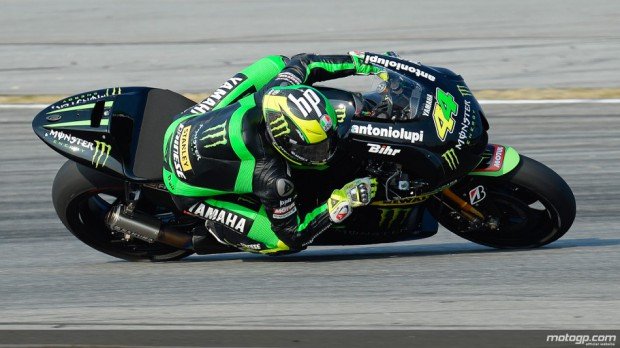 Pol…it kinda rhymes with pole, as in pole position.

The casualties of this season’s warfare will be significant, and the ascension of young superstars will bring about the demise of current factory riders. By November, expect to see Pedrosa and Bradley Smith at the head of unemployment queue, looking for a 2015 ride. Somebody saw potential in Bradley Smith in the junior categories, but they’d most likely been taking LSD. His promotion to MotoGP last year was a gamble that was unlikely to produce results, and Espagaro the younger will embarrass him early in the season, and his results aren’t going to entice many prospective employers. If indeed Pol does outpace him, it’ll be interesting to see how he responds. He was largely sheltered from pressure as Crutchlow’s understudy, and was given a free ride by a sympathetic British media. It’s unlikely he’ll be afforded the same favour for a second unimpressive season.

In the likely event he’s outclassed by his team mate again, and after nine seasons without taking the title, Dani Pedrosa’s stocks will plummet. A regular winner, but unable to be at the front across the entire season, it’s unlikely Repsol Honda will persevere with him for a tenth season and leave the brothers Espagaro available for Yamaha and Suzuki. Spanish citizenship no longer provides his job security, and HRC have signaled its expectations by banishing Puig from his tissue-dispensing duties in Pedrosa’s pit. 2014 is make or break for Dani. 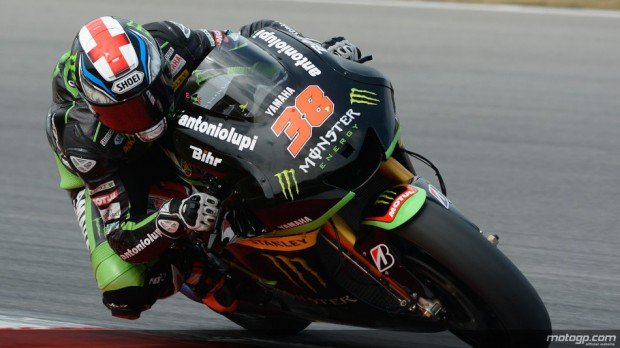 Similarly, the careers of Bradl and Bautista will both be determined by their results this season. While Randy de Puniet has done more mule work than the Bali Nine, it’s unlikely Suzuki will give him a racing role in 2015, so much of the field will be competing for a seat with the rejuvenated Suzuki outfit, Bautista and Bradl foremost among them. Suzuki thought Bautista was The Chosen One when it was last in MotoGP, and it’ll be interesting to see whether it ties to lure him back to the blue bike when it returns in 2015. Logic dictates a better investment would be Pedrosa, with his Honda technical knowledge, if he’s a free agent, or a younger rider with fire in the belly. Bautista isn’t a spring chicken, and he’s never converted his 250cc form to MotoGP results. He’s stopped throwing bikes down the road so often, but he hasn’t made any significant improvement to either his pace or his consistency during his time in MotoGP.

Bradl’s two years in the premier class have been solid, but not outstanding. The immediate success of his Moto2 sparring partner Marquez was bad news for him, and completely overshadowed him own achievements. Whether Stephan perseveres chasing sponsorship and rides in the open category for a few more years is a matter for himself, but unless he produces something stunning this year, his aspirations of promotion to a factory team will be bombed worse than Dresden. Like Bautista, the only thing that will keep him employed beyond 2014 will be a lack of better options for the team. 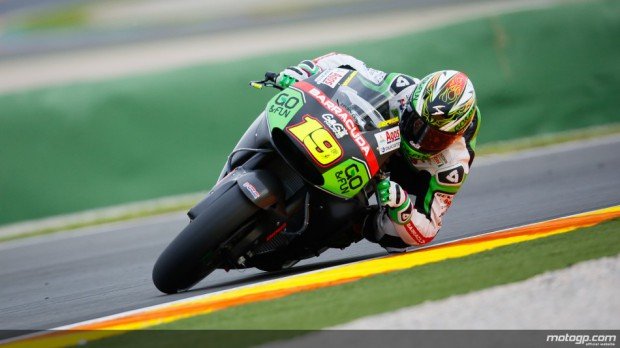 Alvaro has not changed his name to “Barracuda”. Yet.

The rest of the field will just be making up numbers. Some will be chasing a dream that’s never going to come true, and others, like Hayden and Edwards, will be doing it for love of the sport with genuine competitive spirit, but nothing left to prove.

They’re all part of what makes motorcycle racing the greatest of all motor sports. And the 2014 MotoGP promises to be one of the most spectacular and closely contest chapters in the history of the sport.