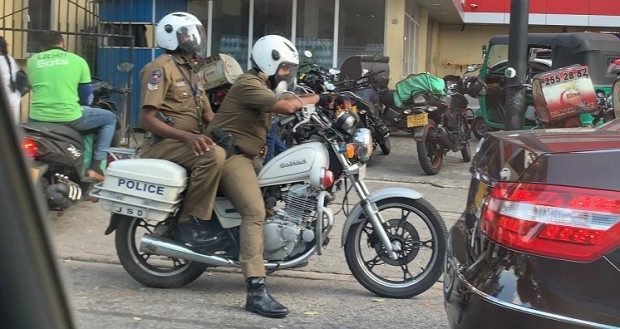 I got sent to Colombo on 22 February to install the IT and comms for a new office. The Australian government had banned inbound flights from China because of the WuFlu on 1 February.

I worked Sydney hours, which involved getting up at 0230 local. The local food was terrible, but there were Japanese and German restaurants in town. I rode in on an Uber every day. The traffic was insane. I commute on a motorcycle every day in Sydney. I would never do it over there.

An ambulance went past the office under lights and sirens a few times a day, but I never saw anyone die. Once in the Uber a couple of soldiers in camo went past on a 125cc motorcycle. The one on the pillion had an AK-47 in his hand.

“You don’t see that much in Sydney”, I said to the Uber driver. He nodded politely.

“Is that one of the AKs with the underfolding stock?” I asked the Uber driver. He nodded politely.

The next day I saw a pair of Highway Patrol cops two-up on a motorcycle. “What a great idea”, I said to the driver. I tried to take a photo but the traffic blocked me.

Two days later I saw two cops on a motorcycle again. They had holstered pistols. All the other cops I’d seen weren’t armed. “These must be special cops” I said to the driver. He said he didn’t know.

I took their photo. I made a note to write to my State member and recommend that the cops in New South Wales get issued with Suzuki GN250s. The savings would be considerable.

I finished putting in the server and router and security cameras and Session Border Controller and setting up the IPSec tunnels at the office. The Kung Flu was in the news daily by then.

The Uber guy that drove me to the airport was the first person I’d seen in the country that signaled to change lanes. I asked him why he did it. He said it was a new car and an alarm went off if he went over the lane line without signaling. He left the right indicator on when he changed back into the left lane for the same reason. The alarm doesn’t care which turn signal is indicating.

There was lots of security at the airport. There were remote body temperature scanners scanning for the Shanghai Shivers.

I changed airlines at Singapore. They had more instruments scanning for the Wu Ping Cough.

I got to Sydney and was waved through.

It was good to commute on a motorcycle again.

22 March I rode up the Putty Road to meet Boris and Klink at Greygums. A cop stopped me just when it was getting interesting and complained that he first got me back at the North Colo RFS at 108 in an 80 zone. He pulled on some latex gloves. “Should I drop my pants?” I asked.

“Just the licence, thanks”, he said.

He booked me. He told me to slow down. I rode like a girl to Greygums. Klink was there. He put out his hand. “Are we allowed to do that?” I asked.

“Well I’m not infected” he said.

I shook his hand.

I rode like a girl to Singleton. Klink and I stayed overnight at Klub Borrie. We drank whiskey. The news said pubs would be closed until further notice due to the Boomer Entomber.

I’d told Ben I would be celebrating the feast day of Simon of Trent by riding to his place to drink whiskey and shoot things. I called him and said I would be a day early. He said that was fine, because he knew I had a bottle of duty free Makers Mark 46 in my tank bag.

I went a bit faster on the Bylong Valley Way. I took the Aarons Pass Road west of the Castlereagh Highway. They’re building a wind farm out that way and in order to ship 80 metre long turbine blades they’ve widened and graded and straightened the dirt road. It’s good dirt. You easily can do a hundred on street tyres in places.

Ben hadn’t succumbed to the Peking Plague. He made dinner. We drank whiskey and shot things and I told him about my ideas for re-equipping the Highway Patrol.

There was a tree over the road when I left the next day. I managed to move it enough to wriggle past. I took the wind farm road out as well. 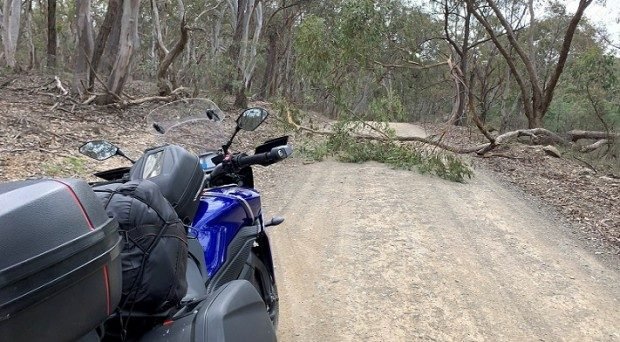 It’s only three or so hours home once you hit the Castlereagh. The family hadn’t contracted the Bat Stew Flu. I checked my snail mail. There was one from State Revenue.

I don’t know what he was being so whiney about.