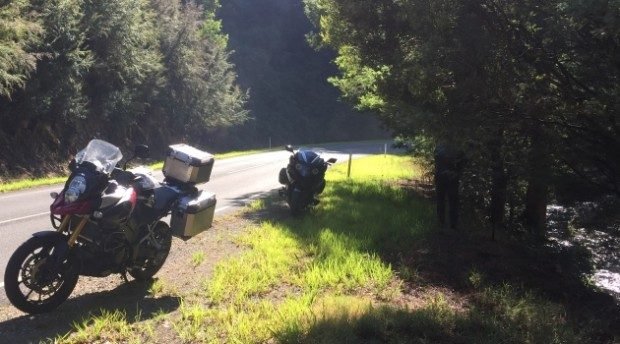 My preferred method of killing rabbits is the .22 WMR round, but Boris chose the BMW K1600 Bagger as we were leaving the mist in the hills north of Omeo. It was a small black kitten, about a third grown, and it came out from under the Bagger in one piece, surprisingly given that the motorcycle weighs 336 kilograms without Boris and his luggage on it.

We’d gone to Omeo to get drunk with Victorians. The Victorians had gone to Omeo to get drunk with Queenslanders who were riding to Phillip Island for the Island Classic race weekend. We’d slabbed it down the Hume to Albury the previous day, turned left along the Murray Valley Highway, and stopped at the Mitta Mitta pub for an excellent steak and three glasses of the excellent local beer.

After lunch, we rode the 108 km of curves to Omeo. They are relentless. Most have advisory signs recommending 30-40 km/h. At least half are blind. As soon as you straighten up from a turn you’re lining up for the next one. It is exhilarating, and tiring, and a little bit dangerous. In short, the Omeo Highway is why we ride motorcycles, and it is glorious.

It rained as we arrived. We drank beer with Victorians. Queenslanders arrived. We had dinner and drank more beer. My memory of the night becomes hazy after maybe 9pm. I think I was arguing with Boris before I left to walk to my motel. I wanted to genocide the Irish, for reasons which escape me right now, but may have involved innate criminality and having apostrophes in their surnames. Boris was saying that he would not permit me to do it because the Irish were the western-most Serbs and had poetry in them and were fun to drink with. He was proving to be stubborn and impervious to reason.

I put this behind me the next day, and was chasing him through the mist in a spirit of amity and camaraderie at about 8:20 when he slaughtered the rabbit. “Blood!” I yelled inside my helmet. “Blood for the Blood God!”

The mist cleared. The overnight rain had washed the road clean. The Omeo Highway was just as much fun as it had been the previous day.

We fuelled up and swapped bikes at Mitta Mitta. I’d long lusted for a motorcycle with a Hossack front end, but I’d never ridden one.

The K1600 Bagger is an intimidating bike. It weighs, as previously noted, 336 kilograms. It’s also nearly 1.7 metres axle to axle. The weight doesn’t seem to matter, though, because the engine is canted severely forward and the weight is low.

It makes about a hundred and sixty horsepower, which is adequate for most situations, and it is very quiet, which I like in a touring bike. And that double wishbone front end is everything I thought it would be.

We turned back on to the Hume at Albury and I spend two hundred kilometres playing with its electronics. There’s lots to play with. There are eight or nine switches on the left handgrip and three or four on the right. I engaged the cruise control, and flapped my arms like eagle’s wings, and gave Boris a thumbs-up signal with my right hand. I put Gundagai into the GPS so I would know when to turn off for lunch. I switched the electronic suspension control between road and cruise a few times. I cycled through all the tripmeters and fuel consumption and range calculations.

I turned on the FM Radio. It was confusing, because I had earphones in my ears and was already listening to music on my smartphone. I don’t remember what came on the FM, but it sounded like Alison Krauss on the smartphone was singing “You can’t always trust a penis”. I wondered what she meant by this, because I have always found my own a reliable companion through life. I turned the FM back off, and the next time the chorus came around she was singing “You can’t always trust happiness”, which, let’s face it, makes more sense.

We lunched and fuelled at Gundagai, and stopped a final time for fuel at Pheasants Nest. I got home around five.

I spent the rest of the night looking at K1300s on Bikesales.

A man could get used to riding on double wishbone suspension.